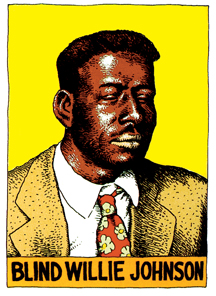 When folklorist Alan Lomax chose music for the Voyager Golden Record, a recording placed aboard NASA’s unmanned Voyager 1 spacecraft in 1977, he selected Navajo chants, a Beethoven symphony, and a timeless tune by a Texan named Willie. No, not that Willie. Included on the record, intended as an audio greeting card portraying the diversity of culture on Earth, was Blind Willie Johnson’s “Dark Was the Night, Cold Was the Ground.”

Included on the record, intended to portray the diversity of culture on Earth, was Blind Willie Johnson’s Dark Was the Night, Cold Was the Ground. Possibly because tracks such as God Moves on the Water, John the Revelator, The Soul of a Man, and the other 27 songs Johnson recorded between 1927 and 1930 were gospel numbers, Blind Willie Johnson is less widely remembered today than more secular Texas blues artists like Leadbelly and Blind Lemon Jefferson. After Jack White of the rock duo The White Stripes remarked from the stage of the Austin venue Stubb’s in 2003 that he was glad to be in Texas, “the home of Blind Willie Johnson,” music writer Michael Corcoran observed that “most in the sold-out crowd likely had never heard of the gospel blues singer/guitarist from Marlin who pioneered a ferocity that still lives in modern rock.”

Many other musicians have also paid homage to the artistry and influence of Blind Willie Johnson. Guitarist Eric Clapton has called Johnson’s bottleneck wizardry “probably the finest slide guitar playing you’ll ever hear.” Bob Dylan recorded a Blind Willie composition on his first album in 1962, and others covering his tunes have included Clapton, Led Zeppelin, the Staple Singers, and The Grateful Dead. Guitarist Ry Cooder describes Dark Was the Night, Cold Was the Ground as “the most transcendent piece of all American music.”

Still, like many blues legends, Johnson remains a figure of mystery. Born near Brenham in 1897, he appears to have grown up in Marlin and Hearne, learning to play guitar—according to one story—on a homemade instrument with a cigar-box body. A widely reported version of his blinding, around the age of seven, sounds torn from the pages of biblical history: The boy’s stepmother, retaliating for a beating his father had given her for alleged adultery, threw lye into Willie’s face. If it’s true, the traumatic episode provides a logical source for the haunting, otherworldly sound of his vocals and slide guitar. The late 1920s proved fertile years for Johnson, but the Great Depression brought his short recording career to a close. After years of touring, Johnson settled in Beaumont, where he died in 1945. Several accounts say the evangelical songster and street performer had contracted pneumonia and was refused admission to a local hospital.

The powerful, spiritual sound of Blind Willie Johnson may someday be received by extraterrestrial life forms. After all, Voyager 1 exited our solar system in 2004 and is due to enter another in some 40,000 years.