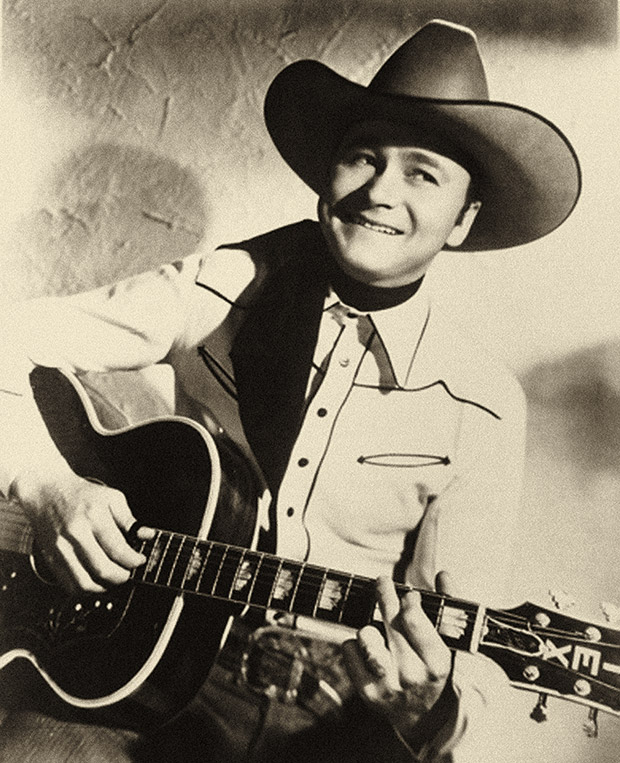 I grew up in a Texas family that does country-western music. The lilt of a fiddle breakdown, the rhythm of a shuffle drum beat, the soulful wail of a steel guitar—these sounds seeped into my pores in the 1950s and ’60s, forevermore setting a button on my internal radio dial to “classic country.”

To me, many attributes of Lone Star culture—the sense of place, pride of history, and gift of storytelling—ring truest when experienced alongside a heartfelt country tune. Great stage moments stick with me, like hearing the late Johnny Gimble fiddle a waltz he once played with Bob Wills, the “King of Western Swing.” And in my car, radio “driveway moments” hold me to the last line of a sad story song, like the tearjerker “She Thinks I Still Care,” sung by Saratoga-born crooner George Jones.

The Texas Country Music Hall of Fame & Tex Ritter Museum in Carthage puts these legendary musicians, as well as the special musical moments they create, into focus for country music fans. With a $1.5 million addition completed this year, the museum has expanded its exhibition space by 27 percent to 16,500 square feet. Located near downtown, with a bronze statue of Tex Ritter picking guitar out front, the red-brick museum offers a kaleidoscope of glittering costumes, vintage posters and photos, and treasured musical instruments, all in honor of the musicians who have shaped country music in Texas.

The Tex Ritter Museum opened two decades ago in a historic home to pay homage to its late namesake, a star of stage and screen who grew up near Carthage. The museum created the Texas Country Music Hall of Fame in 1998 in tribute to other Texas country legends—including another Carthage native, singer Jim Reeves—and launched a glitzy annual show to celebrate new inductees (typically held in August). In 2002, the museum and hall of fame moved next door into a new building, which has since welcomed visitors from every state in the union and 42 other countries.

To date, the hall of fame has inducted 46 members, each honored with a display case of memorabilia and biographical information. Inductees include early pioneers such as honky-tonkin’ Al Dexter, “Texas Troubadour” Ernest Tubb, and songwriter Cindy Walker. There are also more recent stars like chart-topping Neal McCoy and Grammy-winner Linda Davis—from Jacksonville and Dotson, respectively—and groundbreaking Latino singer Johnny Rodriguez from Sabinal. Inductees either hail from Texas or have had careers that contributed to the state’s country music scene. Many also starred in movies and TV shows. (A new exhibit also honors “Friends
of Texas Country Music,” such as Grand Ole Opry photographer Les Leverett and Nashville broadcaster Ralph Emery.) 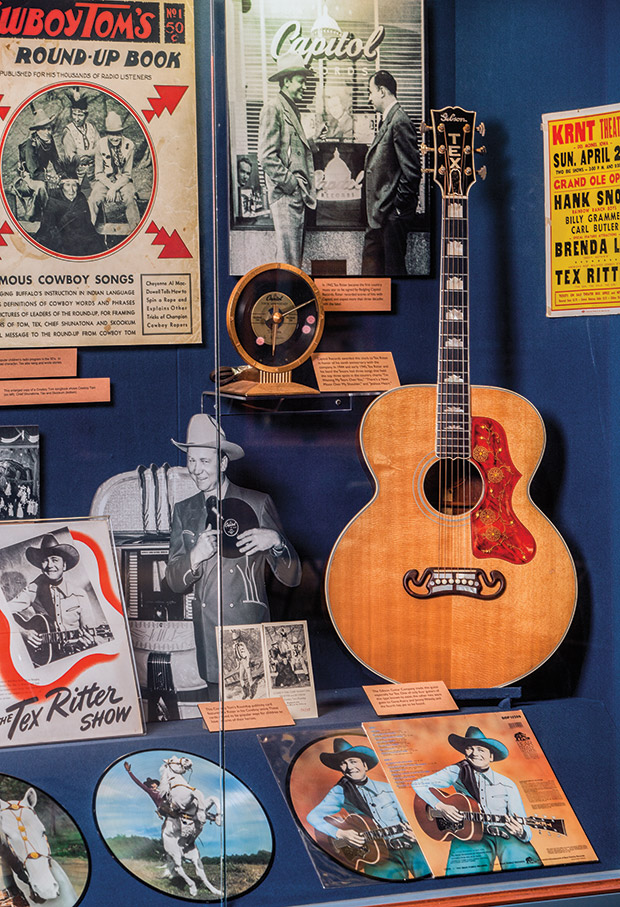 Collectively, their stories chronicle the evolution of country music, a distinctively American blend of traditional hillbilly, folk, and cowboy music with other musical styles, from blues, bluegrass, and boogie to gospel, jazz, and rock. Much of that blending took place in Texas, explains museum founder and director Tommie Ritter Smith, a cousin of Tex Ritter.

“When I was researching the need for this museum, I was amazed at how many Texas artists significantly influenced the development of country music,” Tommie says. “We identified more than 300 artists who qualify to be inducted into the hall of fame.”

Like many kids in the 1950s, Tommie knew Tex Ritter as “America’s Most Beloved Singing Cowboy,” famous for B Western movies and hit records, especially the 1952 Academy Award-winning movie theme “The Ballad of High Noon” (sometimes called “Do Not Forsake Me, Oh My Darlin’”). As his cousin, Tommie looked up to Tex, literally. “He was such a big man, he loomed over me when he came to Carthage on family visits. He was universally loved here and by fans across the world,” she says as we walk through the enlarged Tex Ritter Museum. (Expanded exhibits also honor Tex’s son, John Ritter, the TV and movie star best known as Jack Tripper on “Three’s Company,” who died in 2003.)

A dozen or so vintage movie posters line the exhibition walls, touting Tex Ritter movies. I particularly enjoy the 1940 poster for Rhythm on the Rio Grande, which shows Tex waving a cowboy hat atop his signature rearing steed, White Flash. Displayed nearby is one of Tex’s silver-studded saddles, similar to the one on the poster. Photos and outfits also recall Tex’s leading ladies, including Dorothy Fay Southworth, Tex’s wife for 33 years. New exhibits focus on Tex’s movie sidekicks, who provided comic relief. “Arkansas Slim” Andrews often appeared alongside Tex riding a mule and playing offbeat instruments such as a bicycle pump or a Rolmonica (a harmonica played like a player piano), both displayed in the exhibit. My favorite Tex artifact remains a 1930s Gibson “Super Jumbo” guitar bearing the pearl-inlaid letters “TEX,” one of only four Super Jumbos known to exist.

The displays burst at the seams with memorabilia, dramatically lit by spotlights, which inspire special musical memories for visitors. Roy and Evelyn Peacock of Normal, Illinois, pause at singing cowboy Gene Autry’s exhibit. They check out one of his favorite Western suits, his handcrafted Lucchese boots, and one of his signature “Round Up” guitars. Sold in the 1930s by Sears, the guitar body bears a stenciled scene of a mounted cowboy rounding up cattle. The Peacocks remember listening, as children in the 1930s and ’40s, to Gene Autry’s yodeling songs on the National Barn Dance, a radio show that aired on Chicago station WLS. “We also went to Gene Autry movies during the Depression, which was a great treat,” recalls Evelyn, clutching a Gene Autry CD she bought in the museum store.

Another couple, Rick and Peg Fehr, drove from their Carlinville, Illinois, home listening to Texas country tunes. They came to view spring wildflowers and to get a big dose of Texas country music, first at Hill Country dance halls in Gruene and Luckenbach, and then at the Carthage museum. They marvel at how many country-music legends Texas has produced. Viewing the exhibit dedicated to singer-songwriter and film star Kris Kristofferson, they reminisce about the times they’ve heard him perform in person. Kristofferson’s display features leather jackets and pants he wore in the 1973 film Pat Garrett and Billy the Kid, along with his khaki uniform from U.S. Army Ranger school.

At the Jim Reeves exhibit, I chat with South African natives Koot and Hanlie Engelbrecht, who now live in Royse City, near Dallas. I’m surprised when they recall the country-western stars they’ve enjoyed since childhood. “My parents loved the cowboy movies,” says Hanlie. “They called them ‘cowies.’ They enjoyed singing along with Tex Ritter songs.” South Africans especially loved the velvety vocals of Jim Reeves, “You still hear his songs on the radio over there,” Koot tells me, including Reeves’ biggest hit, “He’ll Have to Go.”

The spacious Jim Reeves exhibit boasts one of his trademark red jackets, as seen on several of his album covers, plus a couple of silky smoking jackets and button-up sweaters that reflect Reeves’ sophisticated yet downhome image. There are also photos chroni-cling his humble upbringing in Panola County, as well as a replica control room of Henderson radio station KGRI—with original ’50s equipment including microphones, turntables, tape players, and a telegraph—which Reeves co-owned with legendary disc jockey Tom Perryman, a member of the hall’s Texas DJ Wall of Fame who is still on the air in Tyler. Another exhibit has Reeves’ baseball uniform from his short-lived pitching career with the Lynchburg Cardinals, a St. Louis Cardinals farm team. Several artifacts recall his popular musical comedy, Kimberley Jim, which was filmed in South Africa and released stateside in 1965, the year after Reeves died in a plane crash. (A life-size statue honors Reeves at his gravesite three miles east of Carthage on US 79.)

I meander past other exhibits as the sounds of classic country waft from the museum’s jukebox, available for visitors to play for free. I take a turn and punch in “Crazy Arms,” Ray Price’s 1956 hit that popularized his signature “Ray Price shuffle,” a 4/4 rhythm with drums and a walking bass line. His expansive exhibit features showy outfits like a navy-blue suit made by Hollywood clothier Nudie Cohn, sequined with dancing Cherokee Indians in reference to Price’s band, the Cherokee Cowboys. The exhibit also boasts musical instruments including Price’s Gibson guitar and a Sho-Bud pedal steel guitar played by band member Jimmy Day. There are also photos of Price with musical friends, including Hank Williams, and displays on his second love, raising thoroughbred racehorses.

I’ll never forget hearing Ray Price perform at the 2001 Texas Country Music Hall of Fame Show in Carthage, a star-studded affair that honors each new class of inductees. Even after more than 50 years of honing his style of country music, Price’s voice that night showed its calm, strong integrity. Each song held the packed house in rapt attention. That’s the thing about country music, as the museum elucidates for fans: It transports us to a magical realm that’s timeless in its telling of the human condition. As the late, great Ray Price sings in his unforgettable song, “For the Good Times”:

Let’s just be glad we had some time to spend together … .”