Of Pork and Posterity

Butchering and curing a hog at Grapevine’s Nash Farm 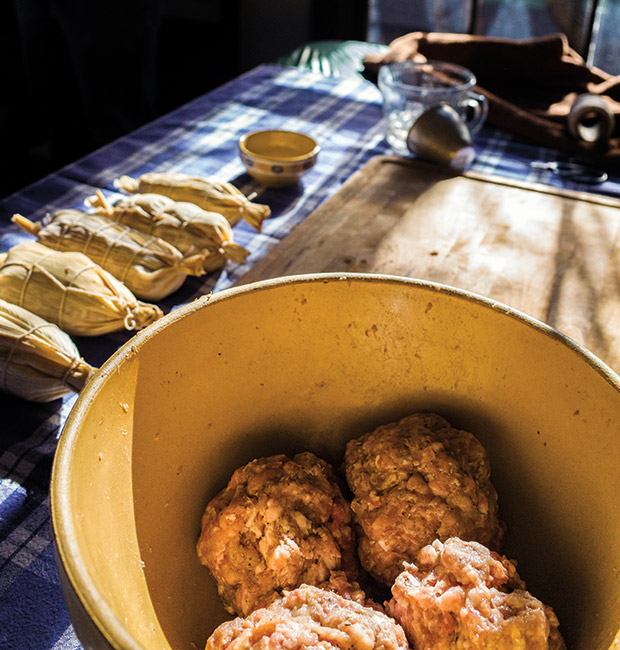 Like most Texans, I grew up loving pork: bacon, bratwurst, ham, carnitas, chops, loin, hot dogs, baby-back ribs, breakfast patties, chorizo, and so on. But also like most people in this urbanized state, my primary contact with pork has been the plastic-wrapped products in grocery stores.

For more photos of Nash Farm.

Nash Farm’s Hog Butchering and Curing Workshop is January 16-17 ($20 per day). Register online at www.nashfarm.org. Participants must be 16 or older.

Other winter hog-butchering workshops will be held at Washington-on-the-Brazos State Historic Site near Navasota on January 9-10 and at Green Gate Farms in Bastrop on January 17.

When my grandpa tells one of his favorite stories about growing up on a farm in Wharton County—the one about chasing down a fugitive hog that had somehow escaped his father’s initial slaughter attempt—I’m struck by my ignorance of the nitty-gritty of raising, butchering, and preparing meat for the dinner table.

That’s why I’m here at Nash Farm in Grapevine on a brisk January morning, gathered with about 30 other people around a pig carcass, notebooks and cameras in hand. The Hog Butchering and Curing Workshop is part of the heritage farm’s historic foodways program, a series of classes demonstrating how farm families of 19th-Century Texas made staples like canned produce, bread, and cheese. The hog workshop takes place annually on the third weekend of January.

“These skills are in danger of being lost, much like blacksmithing and many other heritage skills, if people don’t continue to use and teach them,” says Farm Manager Jim Lauderdale, decked out in a full-brimmed felt hat and brown overalls. “The workshops serve as good reminders to people of where we came from and where we’re going, and to teach skills that people can still incorporate into their lives today.”

In a yard between the restored 1905 barn and 1869 farmhouse, volunteers stoke a fire at the base of a steel drum filled with hot water, puffing smoke and steam into the dry winter air. Lauderdale pulls on leather work gloves and motions to the 200-pound cinnamon-colored hog, a Duroc breed, hanging upside down from a stout mesquite tree branch. (Lauderdale had killed the sow with a .22 rifle that morning before the workshop.)

“Butchering is a skill that has been used since civilization began,” Lauderdale says, relating the skill to 1800s frontier farm life. “A lot of times we think of Texas as a beef state, but in this time period, your average rural family would be much more likely to eat pork.”

And with that, Lauderdale calls for helpers to hoist the hog’s body using ropes and a pulley into the steel drum’s scalding water—a technique used by 19th-Century farmers to help them scrape the hog’s hair before butchering. (Farmers of that time didn’t skin the pigs, as modern hunters would do, because the hide contributed to the meat’s preservation in the curing process.) With the steaming sow stretched out on a worktable, I step forward and grab one of the bell scrapers. Though I scrape with all my might, I dislodge only a small patch of the coarse hair before yielding my scraper to another workshop participant. It’s hard work: The pig is scalded several times, and it takes the group about 90 minutes to scrape the carcass clean of hair.

With the naked pig again hanging upside down from the mesquite branch, Mike Franklin, an experienced wild-game butcher, eviscerates the animal, demonstrating how to carefully excise the organs without tainting the meat. The rank smell of fresh animal guts wafts across the yard as the organs and intestines are collected in a bucket. Franklin then handsaws down the backbone, splitting the hog into two symmetrical halves. Franklin and Lauderdale then coach participants through the process of butchering the halves. The resulting cuts start to resemble the packaged products I’m accustomed to seeing in the supermarket. 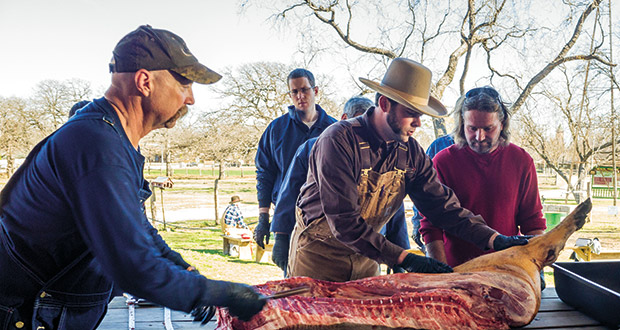 It’s an eye-opening start to the workshop, a two-day, step-by-step lesson in the methods our ancestors used to process and preserve hog meat to feed their families throughout the year. On day two, the class covers making link sausage and breakfast sausage with the meat trimmings; rendering the lard in a cast-iron pot for future use in cooking or to make soap; frying cracklings with fat and skin; coating the meats in sugar cure to withdraw moisture for preservation; cold-smoking the meats in the smokehouse to repel insects; and aging the hams for flavor and preservation.

“You don’t have to have any formal training to do this,” Lauderdale says as he rubs Morton’s sugar cure (a blend of salt, sugar, and food preservatives) into one of the hog’s 25-pound hams. “When I first started doing this program, all I had was a curing guide and an interest.”

Located less than a mile from historic downtown Grapevine, Nash Farm traces its roots to 1859, when the Nash family emigrated from Kentucky and bought the original 110-acre spread. The Nash family sold the farm in the 1920s, and by 1995, the property was targeted for development as multi-family housing. That’s when the Grapevine Heritage Foundation stepped in and bought the farm, beginning a years-long process of restoring the barn and farmhouse to their historical specifications.

In 2008, Nash Farm opened to the public as a 5.2-acre heritage farm with the mission of “preserving, protecting, and visually reflecting” 19th-Century farm life in Tarrant County. The farm hosts events throughout the year, such as the “Spring into Nash” festival on April 16, monthly “First Friday” workshops on skills like weaving and campfire cooking, and a “Frugal Farm Wife” series that focuses on domestic duties like preserving, candle-making, washing, and gardening. The farm grounds also open daily to visitors for self-guided tours of the crop fields, the barn with Gulf Coast sheep, and the chicken coop with heritage speckled Sussex hens. (The buildings, including the farmhouse and the smokehouse, are open during guided tours and special events).

Nash Farm schedules the Hog Butchering and Curing Workshop in January because in the 1800s farmers would butcher hogs when the temperature was below 44 degrees. A farming family’s diet was seasonal, and pork is a prime example. In the hours and days after butchering, the family would eat the cuts that are best fresh—tenderloin, ribs, and chops.

“If you butcher when it’s cold and nature is your refrigerator, you can eat those fresh cuts while they’re still fresh, and then the meat that’s being cured and preserved, you eat that later in the year,” Lauderdale says. “When it comes to our tradition of eating picnic hams at Easter and baked ham at Christmas, the timing truly does come from the preservation of the meat.”

Cold temperatures also allow the scalded hide and butchered meats to chill overnight; the next morning, farmers would start curing the preserved cuts—the belly as bacon, the hindquarter as country ham, the shoulder as Boston butt or picnic ham, and the scraps as sausage. Kept in a dry place under 90 degrees, cured and smoked bacon, sausage, and picnic hams can last for months, while aged country hams can last for a year or longer.

Unfortunately for participants, food-safety regulations prohibit Nash Farm from serving the workshop’s meat products. Rather, the farm uses the meat as part of its foodways demonstrations throughout the year. For example, at its First Friday foodways program in February, the farm fires up its vintage wood-burning stove to prepare a typical 1800s Texas farmhouse meal: fried pork chops, cornbread, and seasonal collard and turnip greens from the garden.

But the workshop participants don’t come to eat, anyway. Attendees tend to be a mix of back-to-the-basics foodies, dedicated home cooks, hunters, and the occasional doomsday prepper.

“Cooking is my primary hobby, and I’m interested in doing some curing,” says Danny Owen from Colleyville, wearing a T-shirt with a diagram of pork cuts. “I wanted to start to get some experience with that and understand what it’s about.”

Charles Manning, who lives near Sanger, says he doesn’t trust the practices of agribusiness, especially when it comes to raising and preparing meat. “I like the traditional way of doing things,” Manning says. “I’m interested in possibly raising hogs where I live, and this would be a part of it. I want to learn how to process them.”

Me? I depart Nash Farm hungry for a plate of pork chops with a side of bacon and sausage, as well as a renewed appreciation for pigs and the endless labor of my farming ancestors. They had no choice but to toil from dawn until dark just to put food on the table.