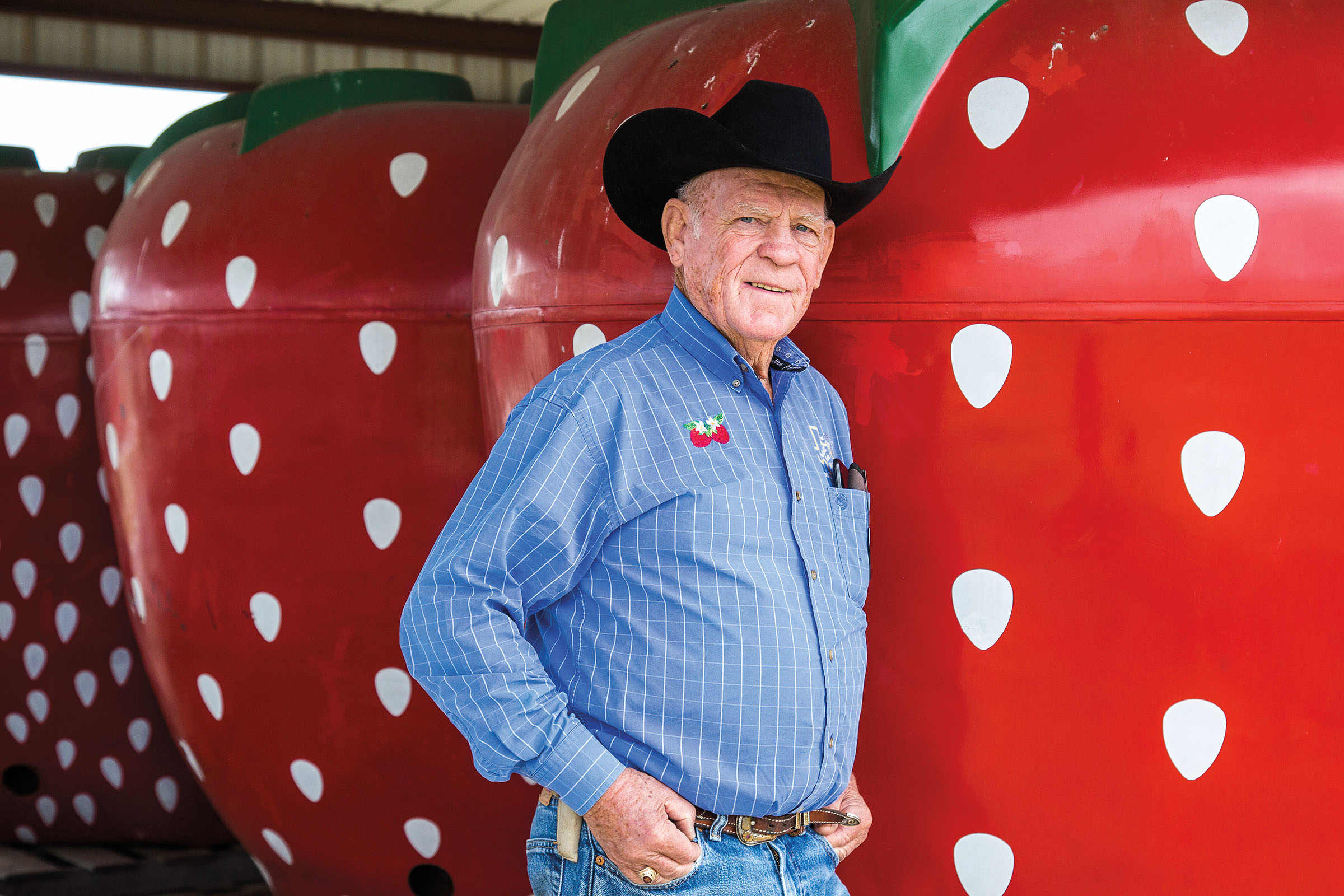 When he’s not out collecting old windmills, Jim Collums can most often be found at Poteet Country Winery, located on the former dairy farm where he grew up. The farm sells wines, jams, ice cream, iced tea, and even beer made from the homegrown strawberries that give Poteet its designation as the “Strawberry Capital of Texas.” Collums ran a utility construction business before deciding to devote his time to farming and making wine from strawberries and mustang grapes. Named for the town’s first postmaster, Poteet has been an agricultural hub since the early 1900s when local farmers tapped into artesian wells for irrigation. Sweet strawberries became the signature local crop, leading to the founding of the Poteet Strawberry Festival in 1948. From 1980 to 1996, Collums served as festival director, spearheading the event’s move in 1980 from downtown to its own festival grounds, which host more than 100,000 visitors annually. Guests who make their way to Poteet Country Winery for tastings and tours also get an inside look at Collums’ side business of windmill restoration—vintage structures rest across the property in varying stages of completion.

“I’ve always loved the country. Growing up, I guess I was really lucky to be on the farm here—I think that’s part of it. And I never did give a second thought to having to get up in the morning to milk cows. That’s how my dad was raised. He thought kids were supposed to work. I had a twin sister and an older sister. My dad never made them milk cows.”

“People in Poteet are good, friendly people. Poteet hasn’t really grown a lot like some other towns. City people haven’t moved in here much, so they’re still basically country people, working people. There are about 24 strawberry growers in the area.”

“We’re blessed with two things around the Poteet area. Strawberries require acidic soil like the sandy loam we have. They don’t grow well in dark ground or clay-type soil. In other parts of the state, the water is too alkaline for them to grow well. The water has to be acidic, so it has to have a low pH level. We get our acidic water from Carrizo Springs.”

“La Mesa is where we always go to meet for breakfast in the morning. It’s a little café in town, and there’s usually about 30 people there. You can find out all the new business, and who’s involved in what. This morning, I went to the coffee shop and ate a taco and got the news. There were strawberry growers and fire department guys.”

“I’ve got 26 windmills over at the Longhorn Museum in Pleasanton. [The exhibit opened last year at the museum, 8 miles southeast of Poteet.] I tried to get some groups in Poteet interested, but Pleasanton built me a big building to put it in. Once I filled it up with windmills, the mayor said, ‘You could have used a bigger building.’”

“The first year at the festival grounds [1980], attendance was about 55,000. In 2019, we ticketed 146,000. People always ask me, ‘How did you make the Strawberry Festival grow so big?’ You have to do two things to make something grow. You’ve got to let people know about it. We put up 20 billboards in San Antonio. We also have billboards in Corpus Christi and Houston. The second thing is give them something worthwhile so they come back again and tell their neighbors about it. We have plenty of entertainment for the family. The carnival starts Thursday night, and there are 14 stages with big entertainers.”

“I gave H-E-B the idea for the Poteet strawberry ice cream back in 1980. Just before the last festival, I found out H-E-B wasn’t going to deal with our strawberry growers anymore. So we decided to make it ourselves. We tried about 10 different recipes, and we built a plant to make it. Everything we could make was sold at the festival—over 3,000 pints. This year, we’re planning to do about 25,000 of them.”