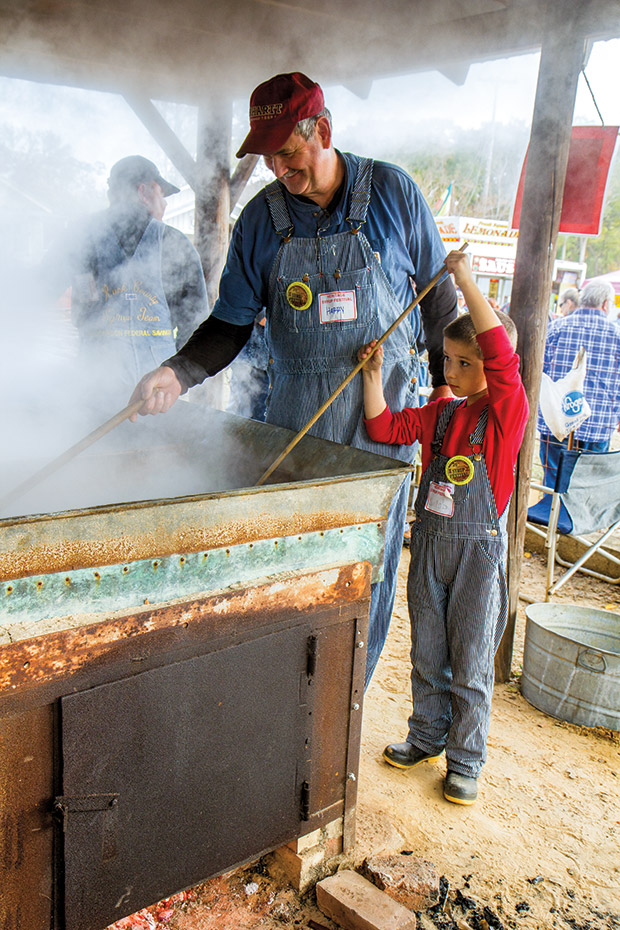 In the days before refrigeration and air-conditioning, East Texans relished sugarcane syrup for sweet relief from their arduous lifestyle.

They used the thick, homemade syrup to slather on flapjacks, glaze hams, and sweeten gingerbread. Farmers grew the cane—a 15-foot tall, bamboo-like grass—in quarter-acre patches along creek beds and river bottoms, and they gathered as neighbors to harvest and cook the cane into syrup.

“My granddaddy raised cane, and my mother cooked syrup as a little girl, but by the time I was born they had gotten rid of all that,” says Don Reynolds, a backyard syrup brewer from Henderson who helps set up the festival’s syrup shed.

Beneath shady oak trees on the Depot Museum’s grounds, two mules—Easter and Bunny—alternately circle a press, also called a mill, extracting frothy, brownish liquid from the sheared stalks of sugarcane. Syrup makers feed stalks into the press, and the sticky juice that comes out is collected in a bucket.

At the syrup shed, the volunteer syrup makers hover side by side beneath a dense cloud of aromatic steam, pushing the meandering liquid through the syrup pan. The Henderson demonstrators use the “evaporative pan process,” a 19th-Century technique that involves a rectangular tray (the syrup pan) placed on a brick firebox, which burns pinewood. The roughly 12-by-4-foot pan has horizontal baffles that create a descending maze through which the boiling, thickening brown liquid passes as the syrup makers push it through.

The syrup team uses long ladles to gently skim away the layers of froth or foam (similar to foam created and scooped in jam making) that gather above the thickening syrup. Gauging temperature and time, but mostly relying on their experience, the syrup team prods the syrup down the maze, being careful not to overheat or undercook it. Ten gallons of juice creates about one gallon of cane syrup.

“It’s a lot like making candy,” says Mark Wheat, a Henderson resident and the festival’s syrup master. “I could tell you story after story of things gone wrong over the years. Like the time a cannon from a Civil War re-enactment spooked the mule and he almost took the mill down the road. Or the time the syrup shed caught on fire.”

The festival is “like a homecoming every year,” Wheat adds. “We catch up with the rest of the syrup team, finding out what’s gone on in their lives.” 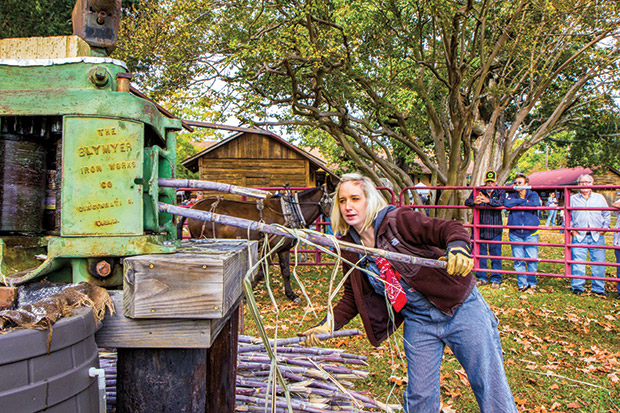 The Depot Museum started the Heritage Syrup Festival in 1988 after receiving a donation of a 200-year-old copper syrup pan from the Richardson-Lowe Plantation in Rusk County, as well as the mule-powered sugarcane mill from Herbert Leopard, says Museum Director Vickie Armstrong. (The museum replaced the old pan in 2010 when a newer one was donated by the Hale family of Henderson.) The syrup festival helped give Henderson a tourism theme, Armstrong
says. “Keeping history alive is the importance of the festival,” she adds. “So with syrup making being a dying art, it is of great value to keep its history alive.”

The aroma surrounding the syrup shed is so potent that, months later, a taste of the syrup evokes the memory of that steam. Molasses-like in flavor and reminiscent of gingerbread cookies, the sharp, metallic cane syrup is bolder than the thin, watery varieties of syrup in the grocery store. Thick and sticky like honey, the cane syrup is also stronger in flavor than pure maple syrup. The Henderson syrup makers generally throw away the first couple of batches to get the “twang” of the copper pan out of the flavor.

“It’s an acquired taste,” Wheat says. “The old folks come through, and when they taste the syrup their eyes light up and they say, ‘This tastes just like my granddaddy used to make it!’ And the young ’uns crinkle up their noses and say, ‘This doesn’t taste like Log Cabin.’”

While bystanders are allowed a taste of the festival syrup, state health codes prevent the sale of syrup made at the festival. However, several vendors sell canned or jarred syrup, some of which was processed at an enclosed mill in Louisiana, which satisfies state regulations.

Also at the 2015 festival, Doug Ford of Hallsville will be selling Texas-grown and Texas-milled sugarcane syrup that he made with a stainless steel pan—a practice licensed for food sale in Texas. Since 2012, Ford has grown the heirloom ribbon sugarcane used by the festival syrup makers. The roughly 2,500 stalks he provides each year make about 30 gallons of syrup.

“I like to grow novelty crops like ribbon cane and peanuts,” Ford explains of the half-acre he’s dedicated to sugarcane. A half-acre is plenty for hobby syrup making, because the cane grows thick and tall.

“It’s like a jungle out there with 10- to 15-foot-high stalks growing so thick together,” he says. “With all that rain this spring and the hot summer this year, it’s been a good year for cane. Best it’s ever been.”

Ford harvests the cane in autumn, carefully watching weather reports to give the crop as long of a growing season as possible while also harvesting before the first frost. Some of the cane grows back each year, and Ford also plants new crops each spring by burying pieces of the stalk horizontally in a furrow and letting them take root.

In addition to syrup, Ford also sells cane stalks for chewing the sugary pulp, like gum. It’s common to see people departing the Heritage Syrup Festival with a long, thick stem of green sugarcane over their shoulders and mouths full of the sweet pulp.

Large-scale Texas sugar production declined in the late 1800s as prison-labor laws changed and disease destroyed several years of crops. Today, Rio Grande Valley Sugar Growers, Inc. is the only large-scale commercial sugarcane operation in Texas, producing more than 1.5 million tons of cane each year, according to the co-op. The co-op’s mill in Santa Rosa produces sugar and blackstrap molasses, the latter sold for cattle feed.

While most of Texas moved away from the crop in the 19th Century, sugarcane remained popular in East Texas, where local mills processed it for syrup, according to the Handbook of Texas Online. In 1870 and 1880, the U.S. Department of Agriculture conducted a farm-by-farm census and recorded cane syrup production in nearly every East Texas county.

In 1922, East Texas sugarcane syrup garnered national attention when small-time producers in 26 Piney Woods counties formed the Texas Farm Bureau Ribbon Cane Growers Association. The co-op built a plant in Lufkin with the mission of producing two grades of syrup with standardized color, flavor, and density under the leadership of USDA food chemists. The Lufkin plant contributed to a statewide production of 2.1 million gallons of sugarcane syrup in 1924 and persisted until at least 1928, but by 1937 there was no record of the mill, according to Lufkin city directories and past Texas Almanacs.

East Texas sugarcane syrup declined throughout the 20th Century and mostly died off with the introduction of national brands like Mrs. Butterworth’s in 1961 and Quaker’s Aunt Jemima in 1966. The USDA no longer documents cane-syrup production. Now, the nonprofit Slow Food USA, which promotes regional food production, includes traditional cane syrup on its “International Ark of Taste,” along with other foods that are fading from use, such as Alaskan birch syrup and the Four Corners gold bean.

In Henderson, the Heritage Syrup Festival is doing its part to keep the tradition of sugarcane syrup alive in the Piney Woods. Some of the volunteers bring along their grandchildren to introduce them to the historical skills.

“We have to get the young people involved so there will still be people doing this years from now,” Wheat says. “It’s pretty interesting to pass it on to the younger generation, which doesn’t have a clue how syrup was made in the old days.”