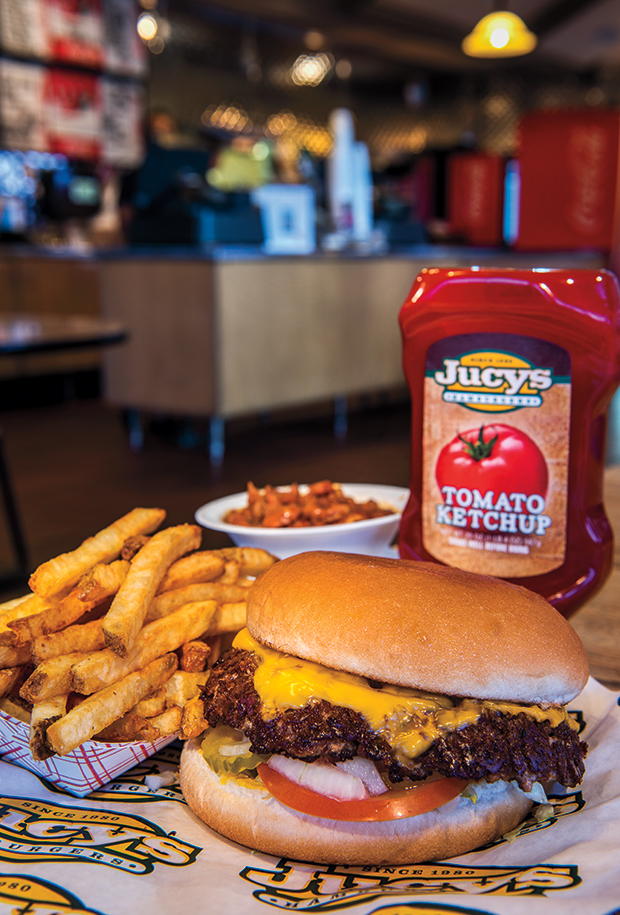 Walking into Jucy’s Hamburgers, at the corner of McCann and US 80 in Longview, the first thing I notice is the vibe, or lack thereof.

There are 5 Jucy’s Hamburgers in East Texas, in Longview, Marshall, and Tyler. See jucyshamburgers.com for locations and hours.

The place is not pretentious. But it’s not self-consciously unpretentious, either, like restaurants that carefully cultivate an aged, hole-in-the-wall feel. I’m at the original location of what is now a five-site chain in East Texas, and the utilitarian decor here hasn’t changed much since it was a diner called
The Spur. Wood booths line the front wall. A counter for ordering and paying is at the back. A row of tables and chairs fills the open space between. The only sounds are of orders being relayed, cups being filled, trays rattling, and people conversing. Food is the focus.

In 1980, Longview native Ronny Maxey, who had owned several restaurants in the area before trying his hand in the construction business, learned that The Spur was for sale. He bought the place, changed the name to Jucy’s Hamburgers, and started to make a name for himself with some of the most delicious burgers in East Texas.

“I just started cooking half-pound burgers,” Ronny says. He also experimented, trying to make each burger better than the last, figuring out what worked and what didn’t. He tried different beef mixtures, including brisket and sirloin, and decided that simple chuck—a relatively fatty cut with lots of flavor—worked best. For the beans on his menu, he settled on pintos, and says he found that the combination of spices was not as important as a good five-hour simmer time.

He never imagined that, 37 years later, Jucy’s would have five locations in Longview, Tyler, and Marshall, or that the family-owned chain would routinely appear on “best hamburger” roundups (including acclaim from Texas Highways readers in 2015).

Ronny credits the restaurant’s success to his team both embracing innovation and maintaining tradition. The workday starts at 5 a.m., when the cooks begin the on-site prepwork, breaking down pieces of beef, heads of lettuce, whole tomatoes, and onions. From there it’s a process of division. Grind. Slice. Chop. Repeat.

“Everybody says their meat is freshly ground,” says Ronny’s daughter Molly, who oversees operations for
the chain. “But we actually grind it in-house, at each location, twice a day. So when you get a Jucy’s hamburger, it’s extremely fresh meat. It makes a huge difference.”

She should know, having been involved in the business since she was a teenager—first as an opinionated diner. She wasted little time in suggesting changes, including that Jucy’s should offer salad-dressing options beyond the always-popular ranch.

“I guess I kind of got in the operations of it very early,” she jokes. She later worked at Jucy’s in high school, then came on full time in 2001, after finishing a degree at Texas A&M. She brought her husband, Dustin, with her, too; he partners with Molly in operations and heads up business development, quality control, and other roles.

It was not necessarily the career path the two envisioned.

“It kind of just fell in our lap,” Molly says. “My dad said, ‘Give it a try. If you don’t like it, you can always go.’ And then we loved it. It was really fast-paced. We came in at an exciting time when he gave us the freedom to expand the menu. We didn’t have any chicken on the menu, and now we sell a lot of grilled chicken and salads, and chicken strips for kids.”

Other menu additions include the Black & Bleu—a burger with strips of crisp bacon on a bed of crumbled blue cheese—and fried green tomatoes.
The tomatoes sport a substantial crust that stays crunchy after deep dives in ranch dressing.

According to Ronny’s wife, Debbie Maxey, new menu items have come naturally as new locations with bigger kitchens have opened; the menu varies somewhat between locations. But innovation is not limited to the menu. Today Jucy’s offers online ordering, and it was among the first mom-and-pop chains anywhere with a Coca-Cola Freestyle machine. These self-serve soda fountains offer diners a computer touch screen to select from more than 100 soft drink combinations, with optional flavor add-ins such as cherry and vanilla.

Convenience can’t dispel the limitations of time: Molly notes unapologetically that Jucy’s drive-through orders take about eight minutes because they don’t cook anything ahead of time.

“Even with the newer menu items, such as the chipotle avocado ranch chicken sandwich, we brine our own chicken. Everything we do and everything we create is still based on that same quality from the original days.”

A complimentary cup of savory pinto beans makes the inevitable wait more bearable. And when my burger arrives, I dig in. Here is one key to the Jucy’s burger’s success: It is utterly alluring in its proportions. The layering of bun, beef, onion, pickles, tomato, and lettuce is perfectly done. The meat itself is tender, without the bulging middle of some “home-style” burgers. Vegetables are cool and crisp, and the layering stays uniform almost to the last bite. The accompanying fries have a good balance of crispness, salt, and earthy potato flavor.

But good food is only part of the explanation for the restaurant’s growth.

“We do have a lot of family involved,” Molly says; the staff includes a number of longtime employees, some of whom have worked at Jucy’s for 30 years. “I think that really is what pushed us to continue to grow,” she adds. “When you’ve got great people, you want to keep them growing too. I think that’s a neat aspect you don’t always see in the restaurant business.”

In addition to the burger joints, Jucy’s has started a separate chain of three taco shops (Jucy’s Taco). And work is proceeding on the next big Jucy’s Hamburgers evolution—franchising. It makes you wonder if they’re taking on too much. But Molly says they plan to move slowly and carefully, staying close to home at first.

As they expand to new locations, more Texans will get a chance to try Jucy’s for themselves. Until then, plan your trip to East Texas, and prepare to loosen your belt a notch.