The Juarez-style version of the dish uses white corn instead of yellow, which makes for a savory treat 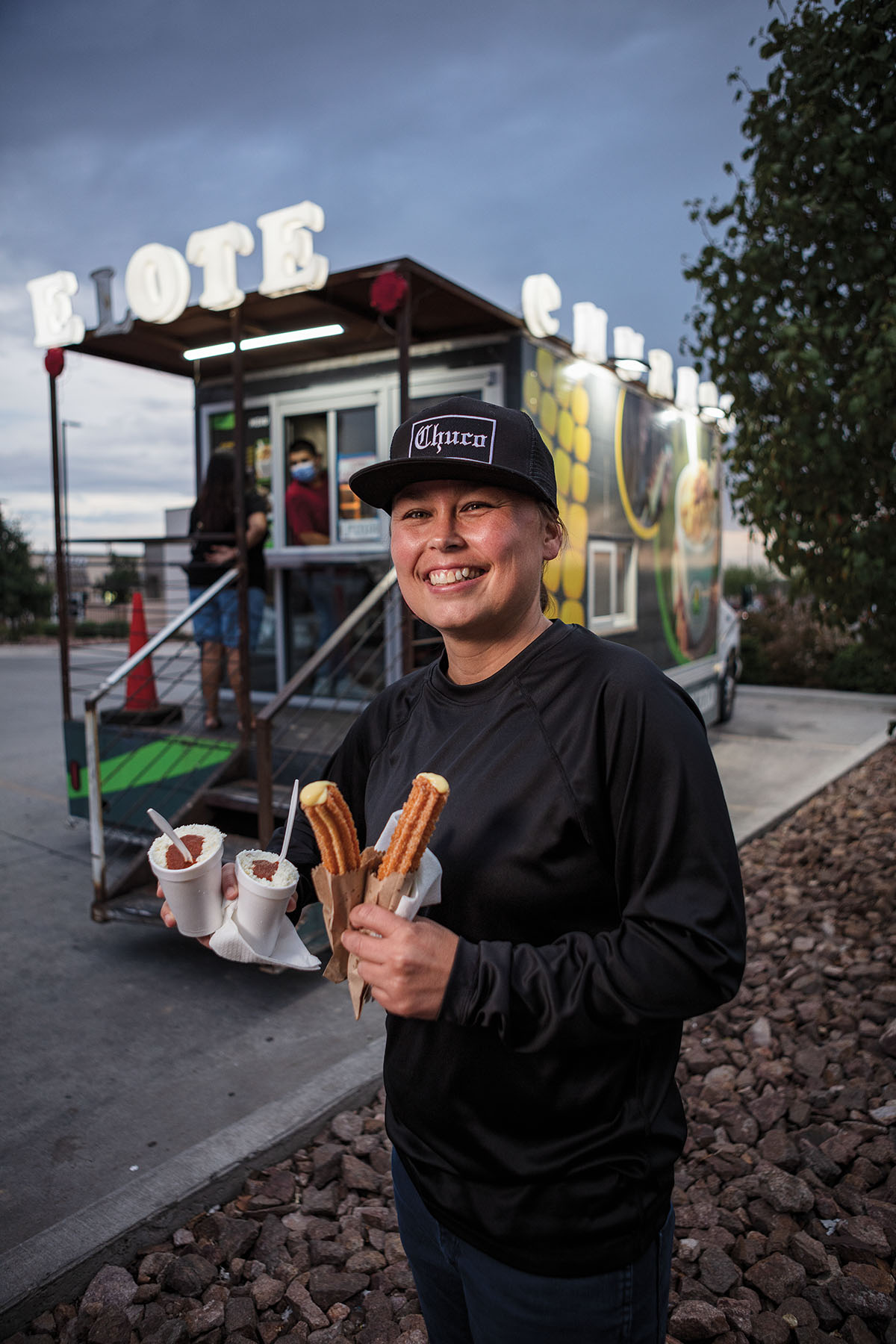 A happy customer with elotes and vanilla cream-filled churros

At night, after a hard day’s work in the oil fields of Odessa, Jesús Rios would lie awake. He’d think about the Mexican snack business he started on the west side of El Paso a couple of years before, in 2011, selling “a little bit of everything.” Of all the things he sold, elotes—Mexican corn—was the thing he did best, but without meaning to, he buried them among 30 other items on his menu. He thought about how he’d invested his life savings into the business he had to shutter just two-and-a-half years after it opened. There were days when he sold as little as $20 worth of snacks. “I failed,” Rios explains in Spanish.

After that, he had little choice but to move to the West Texas oil fields for work. Thoughts of what he’d do differently if he could do it all over again continued to occupy his mind. “I had enough time to think of what I wanted to do with my life,” Rios remembers. “I knew working in the oil fields wasn’t forever. I decided to do what I liked, which was elotes.” When he returned to El Paso in 2013 he tried again with a new stand called Elotes El Vaquero.

Born in El Paso’s sister city, Juárez, Mexico, Rios has always been around elotes. His family sold them on the other side of the Rio Grande. “I know everything about elotes, forward and backward,” he says. He called his business El Vaquero—“the cowboy”—because it’s what his schoolmates called him since his dad always wore a cowboy hat.

He set up his humble stainless-steel stand on El Paso’s east side. Not only had he decided to focus on only selling elotes, but he’d sell them the way he knew how. “The Juárez style of elotes is very simple,” Rios says. “Butter, cheese, chile, and that’s it. It doesn’t go with Valentina [hot sauce]. It doesn’t come with crema. It doesn’t come with mayonnaise or other things that people from other areas eat it with.”

Unlike other elotes stands in most parts of Texas, and presumably the rest of the country, the Juárez—and by extension, El Paso—style of elotes uses white corn instead of yellow corn. White corn is more savory than sweet yellow corn. When mixed with the saltiness of the shredded queso fresco and chile, with just enough sweetness from the melted butter, the white corn balances and complements all the flavors perfectly. Rios serves elotes both on the cob and as kernels in a cup.

Using that simple recipe, Rios’ elotes stand became a success almost as soon as it opened in 2013. “In the first few days, it was a hit,” Rios remembers. “I was selling so much I didn’t know how much elotes to stock, or how much butter, how much cheese. The people reacted in a way that was impressive. I couldn’t believe it.”

The lines at Elotes El Vaquero kept growing. To keep up with demand, he added another stand, also on El Paso’s east side. When those weren’t enough, Rios upgraded to large driveable food stands equipped with kitchens. One of them is a former moving truck, the other is a large enclosed trailer. 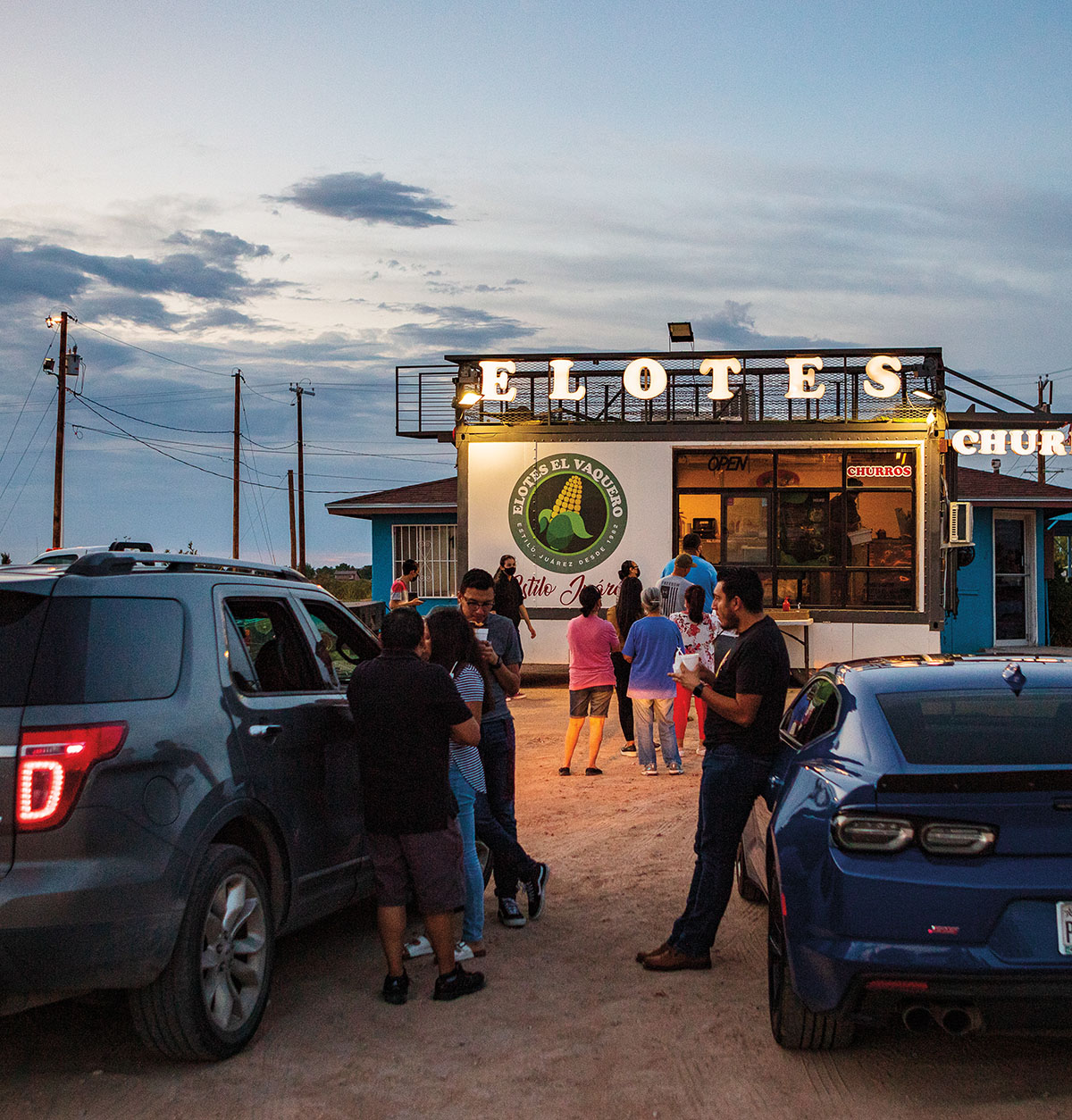 The Horizon City stand with seating on top

Rios’ logo—a corn cob with its husks peeled halfway down—emblazon the sides of the trucks along with the tagline “Estilo Juárez” (Juárez style). The top of one of his food stands is big enough that Rios reinforced the roof and added a railing and a staircase so customers can sit and enjoy their elotes while they take in the surrounding desert.

Corn’s prominence in Mexican culture and the Mesoamerican civilizations that helped create it can’t be overstated. Farmers began cultivating corn 9,000 years ago in what is now Mexico. The grain became so essential Aztecs even had a god of corn—Centeōtl—in their mythology. Similarly, in the Mayan creation story, the gods made humans, first out of mud, then out of wood, only to realize neither version was good enough. In their third and lasting attempt, the Mayan gods made humans out of corn. While corn isn’t full of the symbolism it once held, elotes still bring joy and a connection to the culture.

“His elotes are the best ones I’ve tasted in this state so far,” Melissa Flowers Chávez says. She’s been a devoted customer of El Vaquero for about two-and-a-half years. 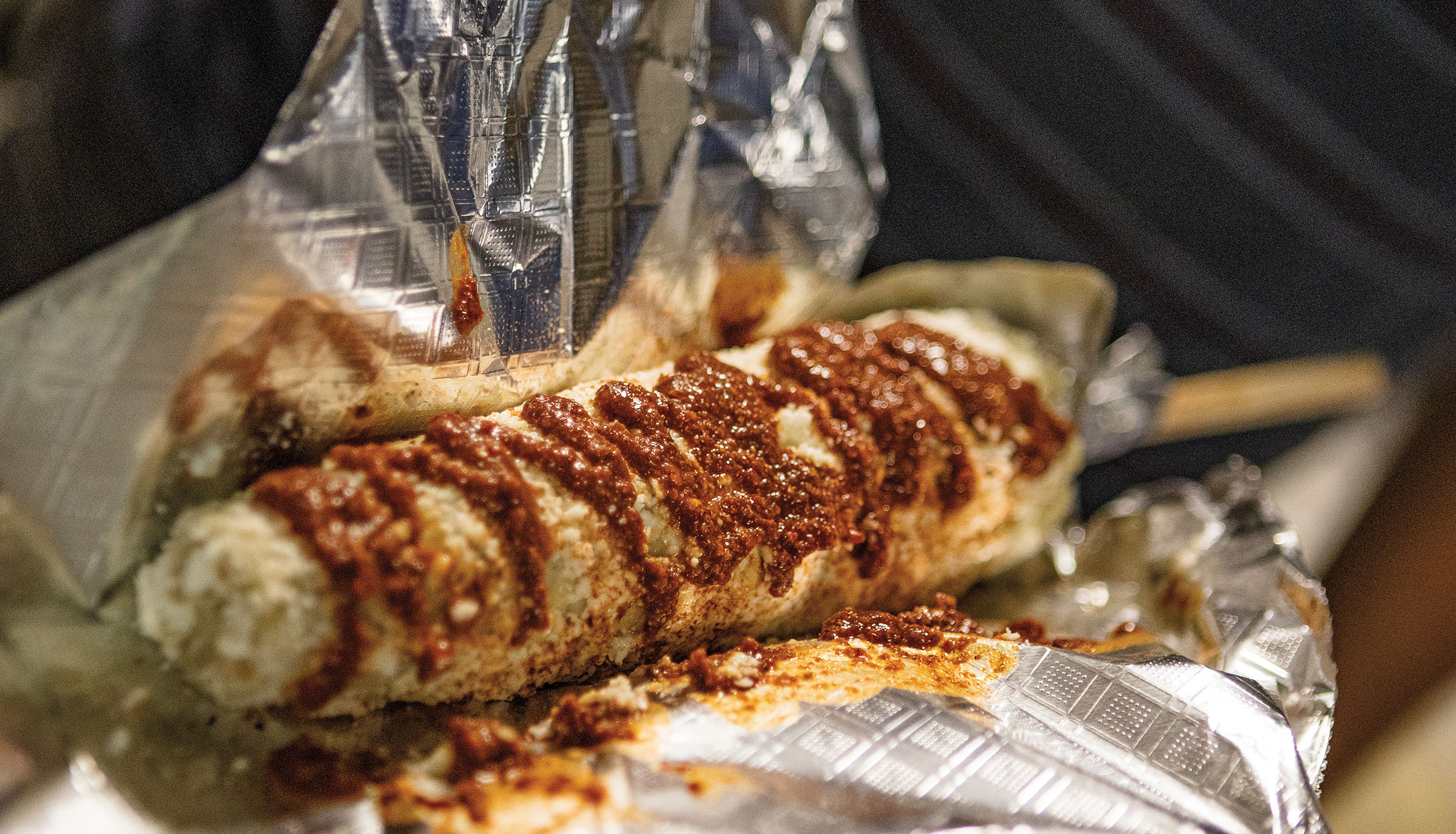 Elotes are also served on the cob

An El Paso resident, Flowers Chávez describes herself as loving elotes with a passion. She especially missed eating them during the five years she lived in Boston while attending college. She searched for elotes there, but never found some that even came close to the ones she grew up eating in Chihuahua, Mexico, where she lived until moving to El Paso in seventh grade. That’s where she noticed elotes were almost a sacred food. 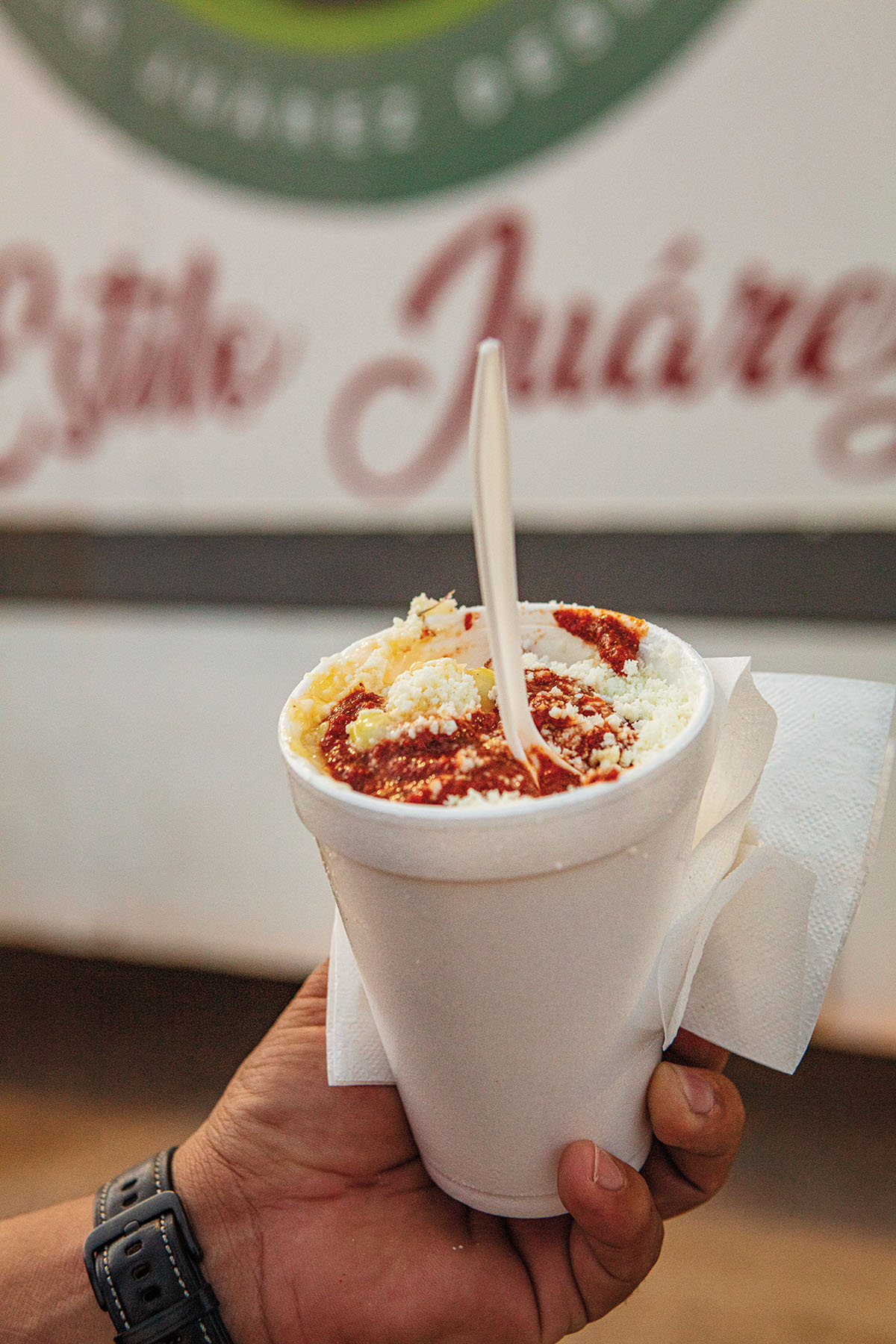 Her love and commitment to finding elotes wherever she’s lived is what motivated her to make a TikTok of Elotes El Vaquero last summer. As soon as she posted the one-minute video, the views and likes started tallying up. Three weeks later, the video had amassed around 1 million views. The response surprised her.

“It was really interesting—with the video a whole dialogue about corn started,” Flowers Chávez says in between laughter, still in disbelief the video of her enjoying corn started a deeper conversation. “People were commenting from all over the place—since Mexicans are everywhere—and they were saying, it’s hard to find good corn.”

Rios says 15 years ago in El Paso there was no place to buy wholesale white Mexican corn. Although that’s changed, outside of El Paso white corn still isn’t commonly used for elotes. Rios hopes to change that by growing his business.

“I want to expand outside of El Paso,” he says. He’s thought about opening elotes stands in San Angelo, maybe McAllen. He talks from the dining room of his home, which his elotes sales helped buy.

Near where he sits is a costume of a smiling ear of corn. It leans against the corner of the wall. It’s about 6 feet tall, with big, pleasant eyes. Rios had it specially made in Mexico City by the same people who make the costumes for the mascots in Mexico’s top soccer league. “It took three months to get made,” he says. “It was expensive but worth the investment.”

Though his business has flourished, Rios sometimes still wears the costume the way he did after he failed, lost everything, then started again from the bottom. Back then, while wearing that costume, he’d wave at every passing car, all but begging drivers to stop and try his elotes. His dedication paid off, and now there are long lines of people clamoring for more.