Hemp is the Secret Ingredient in This Houston-Made Vodka

Written by Tyson Bird, Photographs by Nathan Lindstrom | From the June 2021 issue | Updated: May 26, 2021 | Filed Under: Breweries/DistilleriesEat + Drink 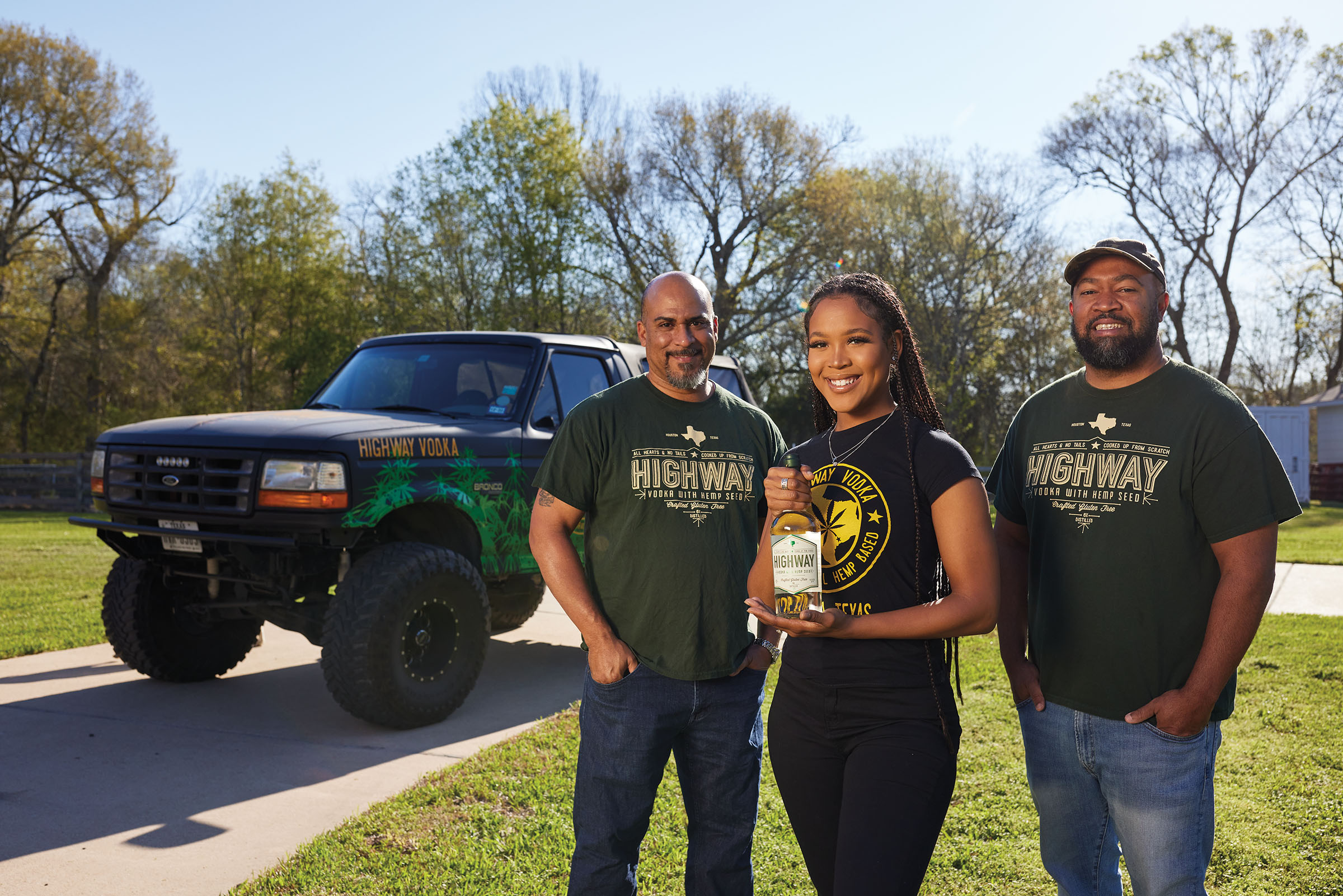 Ben Williams channels the legacy of his great-­grandmother through his work at Highway Distillery in Houston.

Lucille B. Smith was considered one of the first Black businesswomen in Texas, according to the Texas State Historical Association. In the 1930s and ’40s, she developed and marketed Lucille’s All-Purpose Hot Roll Mix; wrote a cookbook, Lucille’s Treasure Chest of Fine Foods; and started a culinary apprentice training program at Prairie View A&M University.

Now, Ben takes on his great-grandmother’s mantle of industry “firsts” as the first Black distillery owner and founder in the Houston area.

“Our family has been really fortunate to have this moment come about twice,” Ben said. “Being part of this family just gave you the belief that you can do whatever.”

The “whatever” Ben chose is creating a smooth yet flavorful vodka using an uncommon ingredient: hulled hempseed. The result of using the grain product, which has high fat content, is a spirit with more body and less burn than your typical vodka, making it much more pleasurable to drink neat.

“I wasn’t a big advocate of hemp or anything like that,” Ben said. “It’s really about what it does for the process.”

A Houston native, Ben worked in events promotion and education before helping his brother, Chris Williams, open Lucille’s, a restaurant named in honor of their great-grandmother. While Chris still serves as chef and owner of the global-cuisine-inspired Southern eatery, around 2012, Ben decided to try his hand at his own endeavor and landed on vodka, which he enjoyed drinking.

“It started as a hobby, but I realized that I had to pursue it,” Ben said. “You owe it to yourself to go for it because I don’t ever want to look back and be like, ‘I sure wish I’d tried this thing.’”

He started out learning the basics but quickly realized he didn’t love the tasteless and odorless product that had become the standard for “good vodka.” Ben thought there had to be a way to craft a better drink, and he found that approach with hemp.

On a cool March afternoon, I stopped by the distillery to visit with Ben and learn more about his process. He greeted me in a gray sweater, jeans, and white kicks, and walked me through the serene space, which included a barn, old but well-maintained whiskey barrels, containers of vodka, and an unmistakable scent of hemp that permeated the building.

Ben spent eight years perfecting his product with his lifelong friend and business partner, Wendell Robbins III. Using a particular strain of hemp, locally sourced corn, and water from an artesian aquifer, distiller and general manager Codi Fuller mashes the product. Then, it ferments for 7 to 10 days. Concurrently, the hemp oil rises to the top. “The thick layer of oil we always talk about makes the difference,” Ben said. The team moves everything from the fermenter to the still, then the vodka is distilled six times to retain the nuanced taste of the grain and oils from the hemp and corn.

“By distilling only six times, that viscosity difference kind of remains here, and that’s what makes it …” Ben stopped himself midsentence to pour me a generous shot. As the smooth liquor hit the back of my throat with earthy hints of hemp remaining on my tongue, I mentally finished Ben’s sentence: “That’s what makes it good.” So good, in fact, that despite just launching in 2019, Highway Distillery vodka will soon be distributed to California, Florida, and Georgia. 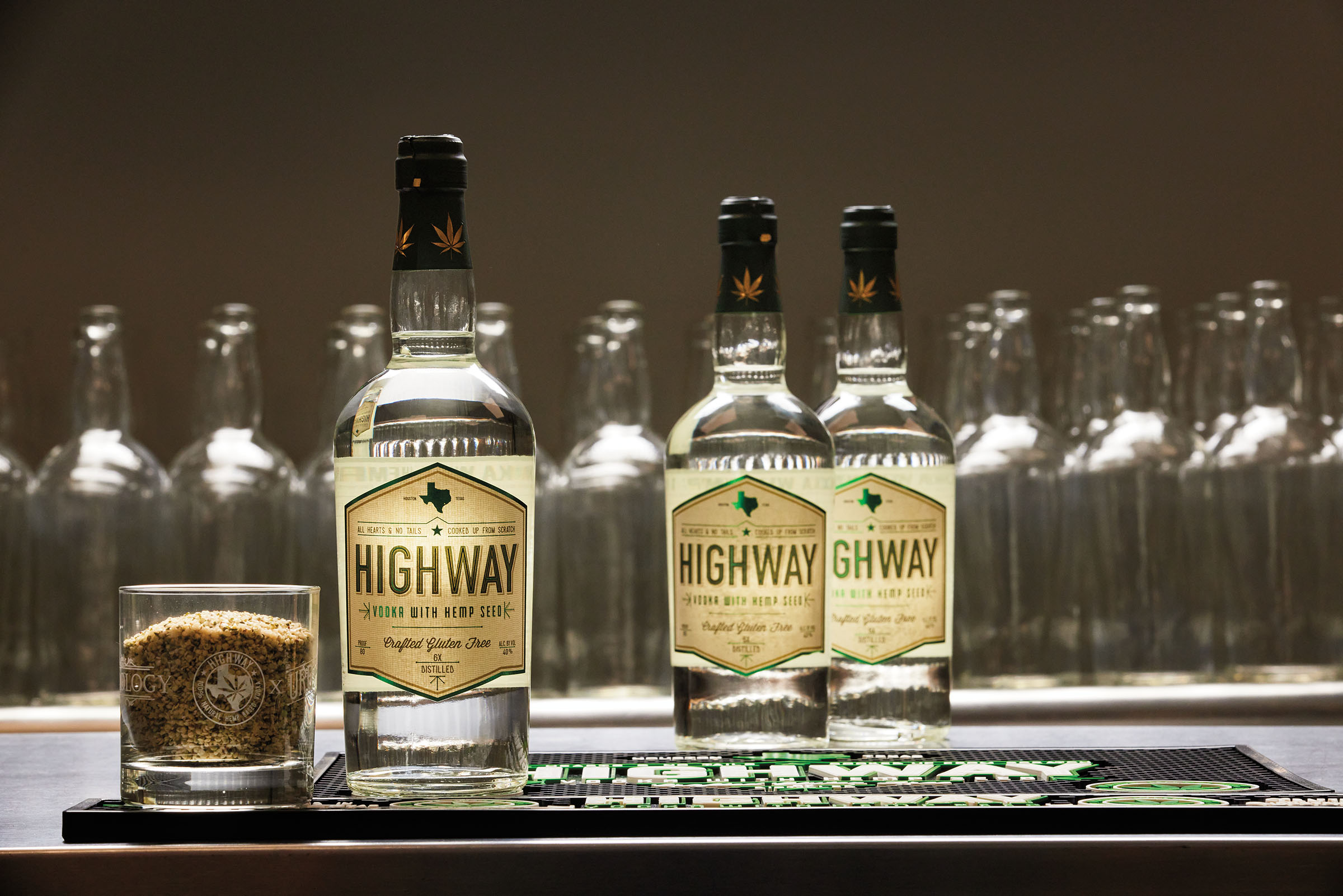 To help his business grow, Ben received business leadership support through an initiative started by the Tennessee-based Nearest Green Foundation that aims to promote diversity and advance African American leadership in the American spirits industry. The foundation is named after the African American master distiller who taught a young Jack Daniel how to make Tennessee whiskey in the mid-1800s. Fawn Weaver co-founded Nearest Green Foundation to honor Green and his descendants, and founded Nearest Green Distillery to continue the spirit-crafting tradition.

“I’m so impressed by what [Ben] has done,” Weaver said. “It’s not just that he is running [Highway Distillery], it’s that he founded it. When you’re talking about what we are experiencing—­systematic racism and things of that nature—people want to make it black and white. I personally don’t believe it’s black and white; I believe it’s green. It is a very large economic gap. The only way that we level the playing field is to close the wealth gap.”

Ben and the distillery are also committed to paying it forward to their community. Ben joined forces with his brother’s nonprofit, Lucille’s 1913, to serve more than 215,000 hot meals to the elderly since the start of the pandemic and 10,000 liters of water to those affected by the winter storm this past February.

“The cool thing was, [Highway Distillery] sits on a well, so it’s not on city water and wasn’t at all affected [by the storm],” Ben said. “So, when it happened, I was like, let’s just bottle up some of this water and collaborate with 1913. People needed help, and we wanted to be there for them.”

As Ben explained what’s next for his distillery, he pointed to an adjacent plot of land he plans to acquire. He wants a more automated system to support a bottling line and bigger infrastructure to support the national interest he’s received.

“Whenever [the COVID-19 pandemic] settles down, we’re going to go ahead and get that opened up, and that’s going to be a lot of fun,” he said. “There are so many opportunities right now that it’s just kind of mind boggling, but when you know your stuff, you can focus on what’s right in front of you.”

Highway Distillery vodka is sold in liquor stores in the greater Houston area and at highwaydistillery.com.