How Sweet It Is!

Get juiced at Granny Clare’s Citrus in Harlingen

People tasting fresh-squeezed orange and grapefruit juices from the Rio Grande Valley often use adjectives such as “luscious” and “ambrosial.” With its heavenly taste, aroma, and color, Texas citrus reaches tree-ripened perfection. 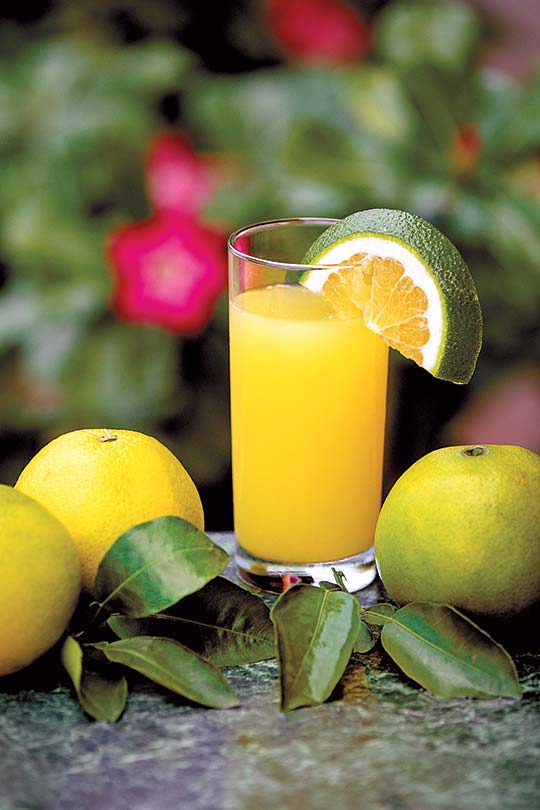 While pick-it-yourself citrus groves in the Rio Grande Valley have all but disappeared, a few orchards still make oranges and grapefruit available at farmstands on site. My favorite is Granny Clare’s Citrus at Rio Pride Orchards in Harlingen, which sells just-picked fruit and fresh-squeezed juices to customers from mid-October to early April. The orchard’s founders, the late Clare and Bill Braden, planted the grove with Rio Star red grapefruit and Marrs oranges after freezes in the 1980s destroyed less-hardy varieties. Today, Rio Pride’s 5,000 citrus trees produce about 500 tons of fruit each year, most of it sold either at the orchard or via its online store.

“People back home in Michigan can’t figure out why I don’t drink orange juice there. Then they come here and drink real orange juice,” says Dee Lambert, a Winter Texan buying a half-gallon of juice fresh-squeezed from Marrs oranges. “We can’t get real grapefruit in Michigan either, so I take 30 to 40 pounds of grapefruit when I head back north.”

Valley native Maggie Briones runs Granny Clare’s storefront and helps prepare citrus juices and fruit sections. “We only sell what we grow, so we know the quality of the fruit is tops,” she says. Her brother Robert Badillo oversees the 50-acre orchard, which is bordered by rustling Washingtonia palms, a cold-hardy tree that often reaches 80 feet tall. In February and March, the intoxicating scent of citrus blossoms immerses the region in natural aromatherapy.

Granny Clare’s six-foot-tall juicing machine squeezes out the juice and pulp, leaving the seeds behind. “Marrs oranges are very sweet and juicy, but they are hard to peel,” Maggie explains. The shop sells almost 100 half-gallon jugs of orange juice weekly, and almost as much grapefruit juice. Because the Valley’s hot days and warm nights allow the citrus to manufacture more sugars, Texas fruits are sweeter than those grown elsewhere.

Commercial citrus in the Rio Grande Valley dates to the early years of the 20th Century, when businessman John Shary bought 16,000 acres around Mission and planted white grapefruit trees.He shipped the first railcars of citrus north in 1923. Other farmers followed with more grapefruit and orange trees, until the Valley’s citrus crop peaked in the 1940s with more than 100,000 acres in production. A natural mutation produced a red grapefruit, and the Texas Ruby Red became the nation’s first patented grapefruit in 1934.

Beginning in the 1950s, researchers like Dr. Richard Hensz at what is now the Citrus Center at Texas A&M-Kingsville in Weslaco developed redder and redder varieties. In the 1960s, Valley citrus marketers decided to emphasize their sweet red grapefruit, leading to the Star Ruby (1970) and Rio Red (1984). In 1993, Governor Ann Richards signed a resolution designating the red grapefruit as the official state fruit.

Today, most Texas grapefruit is sold under the trademarked names Rio Star and Sweet Scarlett. And while modern Texas citrus crops cover only 27,000 acres, fans believe that Texas fruit has more consistent flavor than fruit grown in other states. Even Floridians visit Granny Clare’s for Texas grapefruit.

Not all citrus juice comes in a pitcher. “Juice in a wedge” is Harlingen resident Gray Sullivan’s description of Granny Clare’s citrus sections. “You can get a mouthful in a minute,” he says, paying $9 for an artfully arranged, three-pound plate of grapefruit sections protected by a clear plastic dome. A woman buying four plates of citrus sections says, “I eat them for breakfast and sometimes for dinner in salads. My children and grandchildren love the sections.”

I taste one, and the glistening wedges, plump with juice, seem to melt in my mouth, with no bitter and chewy membranes to detract from the pure burst of flavor. Maggie shows me how to section a Rio Star grapefruit: She first uses a sharp fillet knife to peel and trim the fruit into a juicy red ball, then slides a paring knife around the white membranes to release a perfect section every second or two. “You have to have a very sharp knife or your fruit will get ragged,” Maggie says, as she pops another section free. “It’s really quite easy.” During the winter, she has a full-time, three-person crew preparing nothing but citrus plates of red and white grapefruit and orange wedges for local aficionados.

By late-March, with much of the citrus sold, Maggie teases her customers that they will be going cold turkey as soon as the fresh juice runs out. It’s a long, long wait until October.