A Tale of Two Cafés

In Melvin and Austin, Jacoby’s stays true to its roots 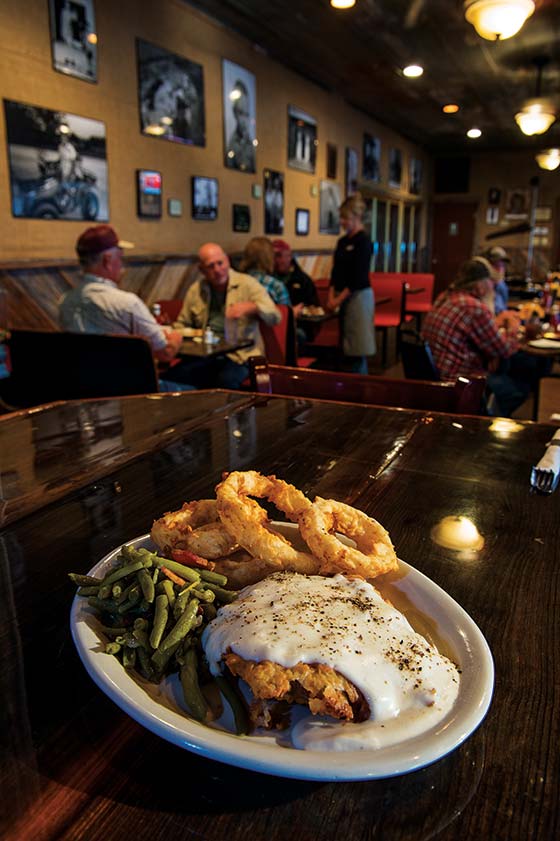 A weekday lunch crowd fills the room with lively conversation. Behind a dining counter, hamburger patties sizzle on the grill and two gleaming machines spin wine-based frozen margaritas. An artfully iced chocolate cake sits atop a glass pedestal on the counter, like a trophy awaiting its winner.

I glance at the chicken-fried steak covering my plate and make a mental note to save room for that cake. I’m at Jacoby’s Café in Melvin, about an hour east of San Angelo off US 87. Jacoby’s has long been a favorite stop during family trips westward from Austin, and so I’m pleased to learn about the restaurant’s recent expansion to the state capital. In August, Jacoby’s opened its new Austin outpost on a site overlooking the Colorado River east of I-35.

The history of these sister restaurants dates to the 1980s, when third-generation Texan Jason Jacoby took over his family ranch just west of Melvin. Jason and his wife, Kelli, soon opened a feed store and eventually put in a kitchen for the staff. “Our employees all had to drive to Brady to eat, so we started fixing meals,” Jason says. “Everybody took turns cooking lunch. In 2002, we added a commercial kitchen and started serving meals to the public.”

The décor is simple: plain tables and chairs, a row of booths, and black-and-white family photos on the barnwood walls. A bank of windows behind the dining counter looks out on a row of dusty pick-ups, the feed-business silos rising behind them. On the menu, salads and sandwiches, half-pound burgers, and diner classics like chicken-fried steak draw diners ranging from tourists to area ranchers. The café’s beef comes from the family ranching operation, including the rib-eyes and other popular cuts that are available on Friday and Saturday nights.

Jason and Kelli’s oldest son, Adam, worked at the restaurant as a teenager and enjoyed connecting with people from all walks of life. “It was a place where everybody was happy and enjoying themselves. That really hooked me,” Adam says.

After graduating from The University of Texas at Austin, Adam settled in the capital city with the idea of replicating his family restaurant in his adopted hometown. He soon met interior designer Kris Swift, who shared Adam’s passion for Texas history and the importance of community; together, they created Jacoby’s Restaurant and Mercantile. 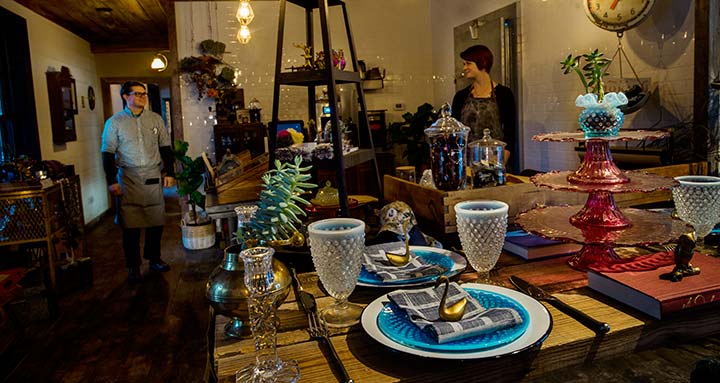 The Austin restaurant incorporates the feel and the flavors of the original. Corrugated tin salvaged in Melvin covers the roof, and cedar posts reclaimed from the Jacoby ranch flank the main entrance. Bricks from an old Melvin bank grace a dining room wall, and a ceiling fashioned from reclaimed barnwood creates a cozy ambiance.

The Austin menu echoes the menu in Melvin, as well, plus new additions such as shrimp-and-grits and family-style sides such as collard greens and macaroni-and-cheese with seasonal beer from neighbor Live Oak Brewery. You’ll also find vegetarian offerings like dumplings filled with pumpkin and goat cheese. The beef still comes from Jacoby cows, of course, and lamb, goat, wild boar, and venison are offered seasonally.

Adam hopes the Austin location will become a gathering place for its East Austin neighborhood just as the original Jacoby’s has become in Melvin. “People in Austin really appreciate that we are continuing our family legacy and that we’ve stayed true to our roots,” he says.

On a typical Friday night, strings of party lights and candles flickering in hobnail glasses lend a festive atmosphere to the deck, where the tables and dining counter are full. My group starts off with an appetizer of deep-fried okra, Brussels sprouts, and cauliflower, an Austin riff on the fried okra, pickles, and onion rings served in Melvin. Later, the waiter whisks away the empty basket and sets a plate in front of me bearing an enormous burger. One bite of the juicy, flavorful Jacoby’s beef patty and I’m a convert.

And tonight, I’ll get the cake to go.