Pre-holiday-lights dining near the courthouse 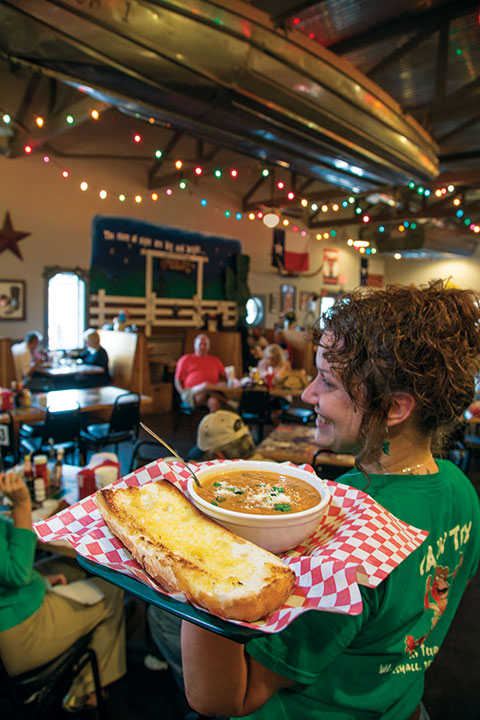 On the Northeast Texas town of Marshall—where I’m closer to the borders of Louisiana, Arkansas, and Oklahoma than the state capital of Austin—strangers call me “darlin’” and “honey,” and sometimes even “sugar.” And I like it.

“Can I get you some more lemonade, darlin’?” (Why yes, thank you!) You looking for the courthouse, hon’? (Yes, I am, thank you!) Did you save room for some of our bread pudding, shug?” (I sure did, thank you!)

And so it goes in this extraordinarily friendly city of 25,000 people, whose dining scene is kept fresh by students at its four colleges and universities, tourists making the rounds to nearby Caddo Lake and historic Jefferson, and a steady stream of patent attorneys who like the Harrison County seat for its history of sympathetic juries. This unlikely mash-up of tastes and influences means you’ll find cappuccino and espresso at downtown’s Central Perks, and craft cocktails at the 100-year-old former dry-goods store that now houses OS2 Restaurant & Pub. Chicken-and-waffles pair with live music at the Blue Frog Restaurant. And you’ll find muffaletta sandwiches and smoky gumbo in the bustling eatery known as Cajun Tex, where oilfield workers and legal eagles alike help themselves to pickles and pepperoncini at a condiment bar fashioned out of an old swamp boat.

And there may be no better time to visit Marshall than during the holiday season, when its opulent 1901 courthouse glitters with more than a million lights as part of the annual Wonderland of Lights Festival, bestowing a festive glow on a city that already basks in a spirit of conviviality.

In fact, you’ll find twinkling Christmas lights year round at Cajun Tex, just one element of a wacky décor theme that also includes duck decoys, aluminum johnboats, rodeo memorabilia from the nearby Josey Ranch, a trophy bass caught at Lake Fork, and a 1937 Marshall High School fraternity paddle. It’s an East Texas time capsule with a zydeco soundtrack. “I always wanted to have a half-Cajun, half-Texan restaurant,” says Louisiana-born owner Johnny Horne, whose wife, Donna, hails from Arlington. “We have Tex-Mex, why not Cajun-Tex?”

Johnny and Donna opened the first Cajun Tex in 2007 and eventually expanded to the current site not far from the courthouse square. “The Cajun stuff is from my relatives’ recipes,” says Johnny, who imports his bread—served in massive buttered slabs with everything from jambalaya and chicken-fried rib-eyes to crawfish salads—from New Orleans. “Our gumbo is our house speciality, and our Breaux Bridge Classic is our most popular dish; that’s two strips of fried catfish topped with crawfish étouffée,” says Johnny.

I’m too full of gumbo ($8.99), which is flecked with spices and rich with smoky sausage and chicken, to try the Breaux Bridge. In fact, after sampling Cajun-Tex’s Natchitoches meat pies, Cajun fries, red beans and rice, and New Orleans-style bread pudding with bourbon sauce, I doubt I’ll ever feel hungry again.

But I change my mind that evening as I settle into a seat looking out onto the courthouse lawn at the Blue Frog. A guitarist plays songs by Eric Clapton and James Taylor in a corner framed by 100-year-old windows, and I study a menu full of made-from-scratch burgers, vegetarian selections like lentil “meat” loaf and spinach salad with chick peas, and entrées that run the gamut from shrimp fettuccini to chicken-and-waffles.

“We do all kinds of things with waffles now,” says owner Shawne Somerford, who sometimes travels to California and New York to scope out food trends. “We do a waffle Monte Cristo sandwich, a waffle eggs Benedict. We try to keep things fun but also make things healthy.”

I’ve got my eye on a square of chocolate buttermilk cake—the dessert that launched Shawne’s first catering business in the 1990s—so I order the grilled tuna with tea-braised cauliflower and Brussels sprouts ($14.99). Perfectly seared and served with house-made bread, it’s delicious. And it’s light enough that I order the cake ($4.50), which shares the dessert menu with made-from-scratch crème brûlée and chocolate meringue cake with fresh raspberries and mint. It’s rich and gooey, with a slight saltiness that makes the chocolate taste even sweeter.

“Can I get you anything else, hon?” asks my waiter, who’s a good two decades younger than me. I smile. Just a take-out box, please.