Ranchman’s Cafe hews to tradition, keeps up with current tastes 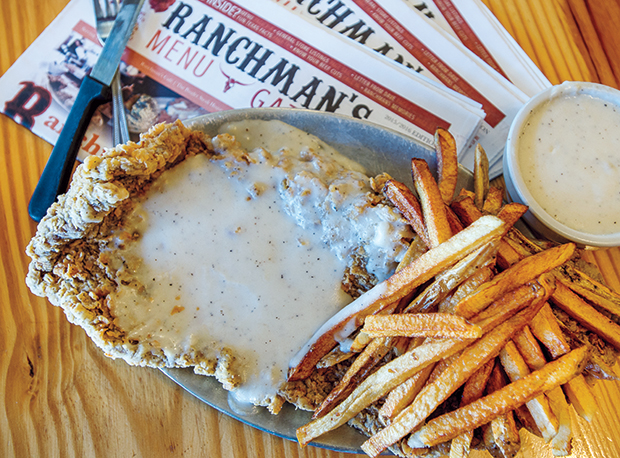 My dining party is enjoying our cobbler when a clang pierces the hum of lunch conversations at Ranchman’s Cafe in Ponder, a small North Texas town 10 miles west of Denton. “He just got his bell rung,” chuckles Dave Ross, the owner and patriarch of Ranchman’s. He points to a nearby customer who is polishing off his chicken-fried steak. There is much to celebrate at Ranchman’s, a restaurant also known as the Ponder Steak House.

Get the recipe for Dave Ross’ Gluten-free Chicken Fried Steak.

The bell is a relic from a boxing ring; Dave found it at a garage sale in Wisconsin. A festive clanging generally commemorates birthdays—in this case, that of Bobby James, who’s here from Hurst with his spouse, Kim.

It is not Bobby’s first encounter with the Ponder Steak House, nor likely his last. “I started coming here when I was three or four years old,” says Bobby. He and Kim got engaged here in 1982. We ask her: Does she remember what she ate that day? “Probably chicken-fried steak,” says Kim, with a smile.

Ranchman’s has other stories, like that of a 1966 visit by actors Faye Dunaway and Warren Beatty, who dropped in while filming a scene for the movie Bonnie and Clyde. And then there were stretch limousines, which brought stars like Don Henley, Eric Clapton, and Meat Loaf.

Ranchman’s is BYOB, though on our visit I didn’t spot any midday imbibers among the mostly local crowd, some in oilfield work shirts and others in boots and jeans. Nevertheless, Ross recalls $350 bottles of tequila, vintage Rothschild wine, and even a margarita machine brought in by visitors. Usually, though, diners bring in coolers of beer or bottles of wine.

Ranchman’s offers items you might not expect to find in a small-town steak house: gluten-free items. Dave’s gluten-free versions of staples like chicken-fried steak, cream gravy, and fried green tomatoes are available if you call in advance. For both the gluten-free and traditional CFS, Dave’s crew trims the round steak in-house and then pounds the cutlet with a tenderizing mallet before dropping it in oil heated to 335 degrees. “A little cooler than most places,” Dave explains, “to get the crust crispy and the meat still tender and juicy.” A six-ounce portion ($10.95) is more than enough with fries and a side; the 12-ounce option ($15.95) may require a take-home container.

I often order a T-bone steak, which is carved from a beef loin in-house. Instead of grilling over a flame, Dave prefers what he calls “the griddle method” because it “chases the juices up into the meat instead of losing them onto hot coals.” Ranchman’s regulars know to reserve a baked potato in advance, as that’s tradition in these parts. But the French fries are a solid choice: Delivered in long strands, they’re deliciously caramelized on the outside.

First-time visitors may be surprised at Ranchman’s modest quarters—a shotgun-style house that hasn’t changed much since it opened in 1948. The first owner, a grocer named Grace “Pete” Jackson, hired future owner Dave Ross in 1974 as a weekend cook and butcher. Dave returned to work in various capacities over the years and bought the place in 1992. Even the bell that rang for Bobby James’ birthday harkens to Pete’s years. The first birthday bell was the schoolyard variety, mounted on a stand, but two overly eager waiters pulled the rope simultaneously in 1986 and the bell cracked when it hit the concrete floor.

Ponder is changing as Fort Worth’s expansion encroaches on Denton County. The massive Texas Motor Speedway attracts motorsports fans just 13 miles away, and Ponder High School is now big enough to support a 3A football team. But Ranchman’s has mostly resisted the move to modernity, except to replace old plumbing and install central air and heat.

We appreciate the improved air conditioning on the warm day we visit, but not as much as the cobbler, the product of pastry cook Francisca Astudillo, a Ranchman’s employee since 1994. But we face a dilemma: whether to order cherry, blackberry, or peach.

Waitress Marie Huber, a Ranchman’s fixture for two decades, has a solution. She disappears behind the counter, returning with all three varieties, neatly divided in each bowl.

That’s a triple treat if there ever was one.