On a Roll at Gil’s Broiler 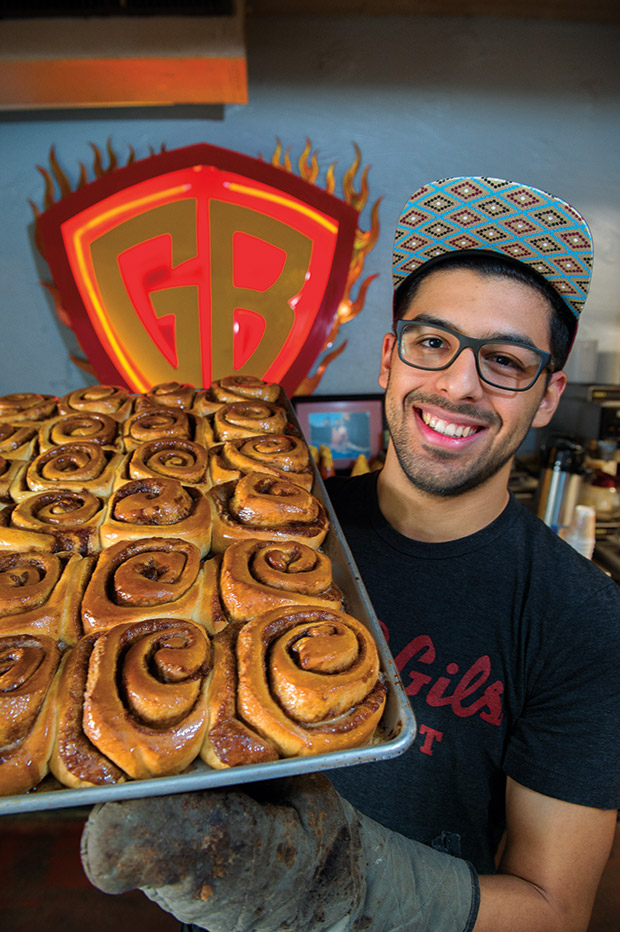 When Gil Rainosek walks into the San Marcos restaurant bearing his name, he chats with the kid behind the counter, snatches an errant napkin from the floor, and pops into the kitchen to make sure enough iced tea is being brewed—duties any restaurant owner would perform. Rainosek sold Gil’s Broiler & Manske Roll Bakery about 15 years ago, but he tells me he comes back every month or so “just to check in.”

More things to do in San Marcos.

“This place is still basically the same,” Rainosek says, “long like a bowling lane.” That’s pretty accurate: Customers order at the front counter and then find a booth in the narrow dining room, which stretches back 100 feet or more—just like when Rainosek bought the place in 1966. Back then, though, he says, there wasn’t much else around. “There were vacant lots across the street and behind us. There was an abandoned bus station on the corner. We certainly had a lot of parking available.”

There was no shortage of customers, though. Located between the college campus (now Texas State University) and the 1909 Hays County courthouse, the restaurant—then named Manske’s Grill—was already popular by the time Rainosek took over. Opened in the late ’40s or early ’50s, it served plate lunches, sandwiches, and an oversized cinnamon roll created by original owners Roland and Ruth Manske. Rainosek, who had a decade’s experience with the Holiday House burger franchise in Austin, soon settled on the char-broiled burger concept, but he knew the value of the popular cinnamon roll. “When I bought Manske’s, the only thing I wanted from Roland was the cinnamon roll recipe. So he showed me how to make it,” he says.

“I had a charcoal pit in the restaurant for more than a decade, but eventually I went to an electric broiler,” Rainosek continues, then adds with a knowing smile, “I thought my burgers were real popular, but from day one everyone thought of us for the roll.”

And for good reason, I think. A fresh Manske Roll sits on the table between us, and this isn’t my first time digging in to one of these sweet, sticky indulgences. It’s about the size of a saucer and plump like a Christmas pudding. Served warm, it oozes with sweet flavors that are both comforting and somehow nostalgic. To bite into a Manske Roll is to immediately taste what others have loved for generations, including—according to legend—none other than Lyndon Baines Johnson, who attended college in San Marcos and returned to the city before, during, and after his presidency. The tale is known around town, and regularly repeated by various media outlets, of how Johnson loved Manske Rolls so much that he had them shipped to the White House.

Rainosek nods his head when I bring up Johnson. “There are lots of stories about that,” he says. “But I never shipped any to him. It’s possible that one of my customers did, though.”

Present owner Ruben Becerra embraced the popularity of the famous Manske Roll when he bought Gil’s in 2000. Working with an outside bakery, he increased production for a short time before deciding to bring the roll back to San Marcos. Today, the Manske Rolls are once again made in-house, every morning—usually by Becerra himself. “I can stand behind the quality a lot easier when I make them,” he says. “I was taught personally by Gil, and I don’t want to mess it up.”

Known around town as the “oldest restaurant in San Marcos,” Gil’s Broiler & Manske Roll Bakery remains popular with students and graduates at Texas State, as well as tourists and others passing through. They still find burgers, plus wings and burritos, but they remember Gil’s first for the cinnamon roll. For them and for history, Becerra keeps the recipe as close to the original as possible; but today’s roll can also be topped with ice cream, caramel, melted chocolate, and crisped bacon. Such innovation has proven popular, even though Becerra admits, “For years I was reluctant to put anything on the original Manske Roll.”

After all, to unwind a doughy, gooey, cinnamon-laced layer of a Manske Roll is to immediately revisit the same comforting, nostalgic flavors that generations of customers have enjoyed for more than 60 years. If you go, feel free to tell them LBJ sent you.