On the Right Track

A plot of land 15 feet from an active stretch of railroad tracks is not generally considered a prime location upon which to open a fledgling restaurant. And in fact, when Don and Lynn Forres launched the Huisache Grill in New Braunfels in 1994, few had confidence that they would succeed. 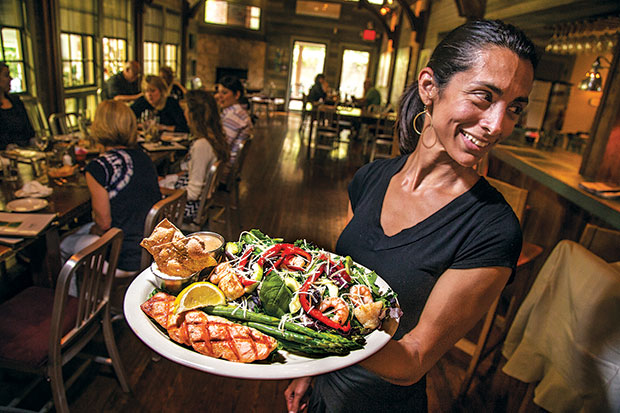 As Lynn tells it, locals gave them six months. In addition to noisy trains, the site was difficult to see from the street, parking was limited, and even the name—Huisache (“wee-satch”), named for a scrubby tree native to South Texas—was hard to pronounce.

But people showed up at first, as they do when a new place opens. They wanted to see the renovated 1920s building and maybe have a beer while watching the freight trains speed past. And then a funny thing happened: They kept coming—so many that the Forreses expanded within the restaurant’s first few years.

Huisache’s reputation grew as guests told their friends about its contemporary American food, global wine list, and quirky surroundings. Thick with ivy and boasting wood floors, ornate chandeliers, and eclectic art by local artists, Huisache manages somehow to feel intimate as well as open and airy. And even now that 20 years have passed and the Forreses have expanded three times, Lynn says they have never wavered from their original approach.

“From the beginning, we designed a menu emphasizing honest ingredients with a healthy slant,” says Lynn, a career restaurateur who created Huisache’s menu to make use of local ingredients whenever possible. “Our secret is simple: We treat our guests with sincerity and caring, we’re consistent, and we try to keep things simple. It’s a very gratifying lifestyle making people happy with food and friendly service.”

Portions are hearty, prices are moderate (main courses range from $13.95 for blackened farm-raised catfish or chicken-fried steak to $24.95 for the 16-ounce rib-eye), and dishes are thoughtful and decidedly unfussy. For a hearty salad option, I recommend the Mediterranean Seafood Salad ($11.95), with grilled salmon, cocktail shrimp, asparagus, black olives, new potatoes, cucumber, and roasted red peppers bringing an unusual flavor combination to the table. Fish, chicken, and steak dishes dominate the main-course offerings, but items such as the California Sandwich ($8.95, with avocado, tomatoes, cucumbers, field greens, and sun-dried-tomato cream cheese on toasted whole wheat bread) cater to vegetarian diners.

Maintaining the historic integrity of their property, which has served over the years as a feed store, antiques shop, and private residence, has always been paramount to Lynn and Don. Don, a San Antonio native who was moonlighting as a musician when he met Lynn, served for years on the Comal County Historic Commission and on New Braunfels’ Historic Landmark Commission. In the 36 years they’ve been together, the couple has renovated more than 30 homes and commercial properties. These days, Huisache is the centerpiece of the Forreses’ Grassmarket district, a pedestrian zone featuring specialty shops and boutiques, which they created to bolster downtown New Braunfels’ appeal for shoppers and diners.

Having built Huisache into a Wine Spectator-honored, much-lauded fixture in their adopted hometown, Lynn and Don have in the past few years handed over the restaurant’s day-to-day operations to General Manager Susie Russell so they can focus on traveling, culinary tours, family, and friends. Huisache Grill is, for the time being, exactly where they want it to be, in size, menu, and appearance. Even its 20th anniversary is being regarded by the Forreses without much scheduled fanfare.

“To be honest,” she says, “we haven’t given it much thought yet, but it’s a very special milestone for us.”

That’s not to say that Huisache Grill isn’t front and center in her mind most of the time. “Taking the concept from inception to today, 20 years later, is much like raising a happy, healthy child or building a strong marriage—it’s so gratifying,” she says. “It’s all so challenging, rich, and rewarding. We end each day with a unique satisfaction and start the next day all over fresh.”