Casual and Classy at the Chicken Farm 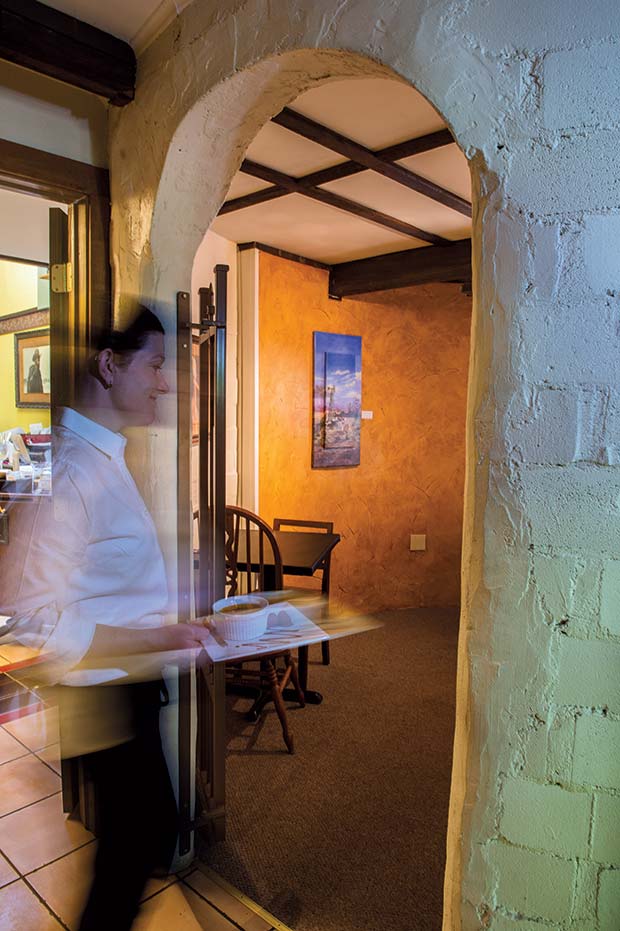 And yes, the restaurant is really built around a pair of grain silos at the Chicken Farm Art Center, a compound of artists’ studios just north of downtown San Angelo. Roger Allen, a potter, bought the ramshackle property in 1971, long after it was no longer used for raising and processing chickens, and converted it into a place where artists could live and work. Today, the Chicken Farm Art Center houses 15 studios and two galleries where artists create and sell their works, as well as an inn and the restaurant. The Chicken Farm also hosts regular public events, such as the three-day Thanksgiving Open House and a monthly First Saturday celebration, when the resident artists open their studios and are joined by various vendors, a circle of jamming acoustic musicians, and a free clay giveaway to children who wish to pursue their muses.

Last fall, current Silo House proprietor Helen Keith, who runs the restaurant with her husband Craig, was selling her barbecue sauce, relishes, and baked goods at the Chicken Farm during First Saturday when she learned of the opportunity to take over the restaurant. The restaurant was already well-established in West Texas for its upscale, five-course comfort-food meals, so she didn’t hesitate. But this marked her first foray into the restaurant business. “It was sink or swim for us,” she says with a laugh. “I’d never done anything like this before, but it was too good of an opportunity to pass up, and we dove right in.” For their chef, they hired Sergio Rico, who’d been running the catering operation of the cafeteria at Angelo State University but yearned for the chance to be more creative.

The Silo House was closed for nearly three months, reopening just before Christmas 2014. During that time, Craig spearheaded a thorough remodel. He built new tables and repainted the interior with red and golden hues to lend a warm ambiance. And, to “bring the Chicken Farm back inside,” as Craig puts it, they displayed paintings, textiles, and chicken figurines from their neighboring artists. With a fireplace burning in the main room and music playing softly in the background, an evening here balances casual and classy in a way that’s not easy to achieve. And once you’re here, you can stay for the evening, if that’s your desire. The Silo House, which comfortably seats 42, doesn’t turn over tables. “People come to kick back and relax,” explains Helen. “They don’t want to be out in a half-hour.”

“Sergio and I sit down and come up with the menus together,” she says. “They’re not heavily structured, so he has as much freedom to be creative as possible.” She prepares the desserts and he does the rest, sticking to fresh, local ingredients as best he can. The entrée options always include an organic rib-eye steak, but it’s given a different treatment with sauces and rubs each week. Seafood stars in a second option—shrimp, snapper, maybe even octopus—and the third entrée features pork, chicken, or lamb. Meals, which include five courses, usually run $40-$60 per person. Alcohol is not served, but diners are welcome to bring their own for a small corkage or set-up fee. Weekday lunches feature soups, salads, sandwiches, and wraps, plus two daily hot entrées.

I dined at a table overlooking the Chicken Farm galleries, and the main dining room was nearly full with patrons of all ages. I chose an appetizer of tomato, salami, and mozzarella drizzled with basil oil, a light and enticing beginner. That was followed by a cream-of-jalapeño soup that emphasized the citrus flavor of the pepper rather than the heat (though there was some of that, too) and a beautiful sesame-beet salad accented by carrot, thin snips of scallion, and a few scattered peanut halves, all in a peanut-soy dressing. I chose the charred lemon chicken piccata entrée and was rewarded with two large pieces of succulent chicken breast, pounded thin and served atop a bed of rice, with crisp, roasted asparagus on the side. For dessert, I went with a walnut tart with orange Chantilly cream. The tart was the final triumph of the evening—chewy, not too sweet, with a hint of rosemary, and served with a sauce that reminded me of butterscotch.

This is my kind of fine dining, and in a most unstuffy manner at that.