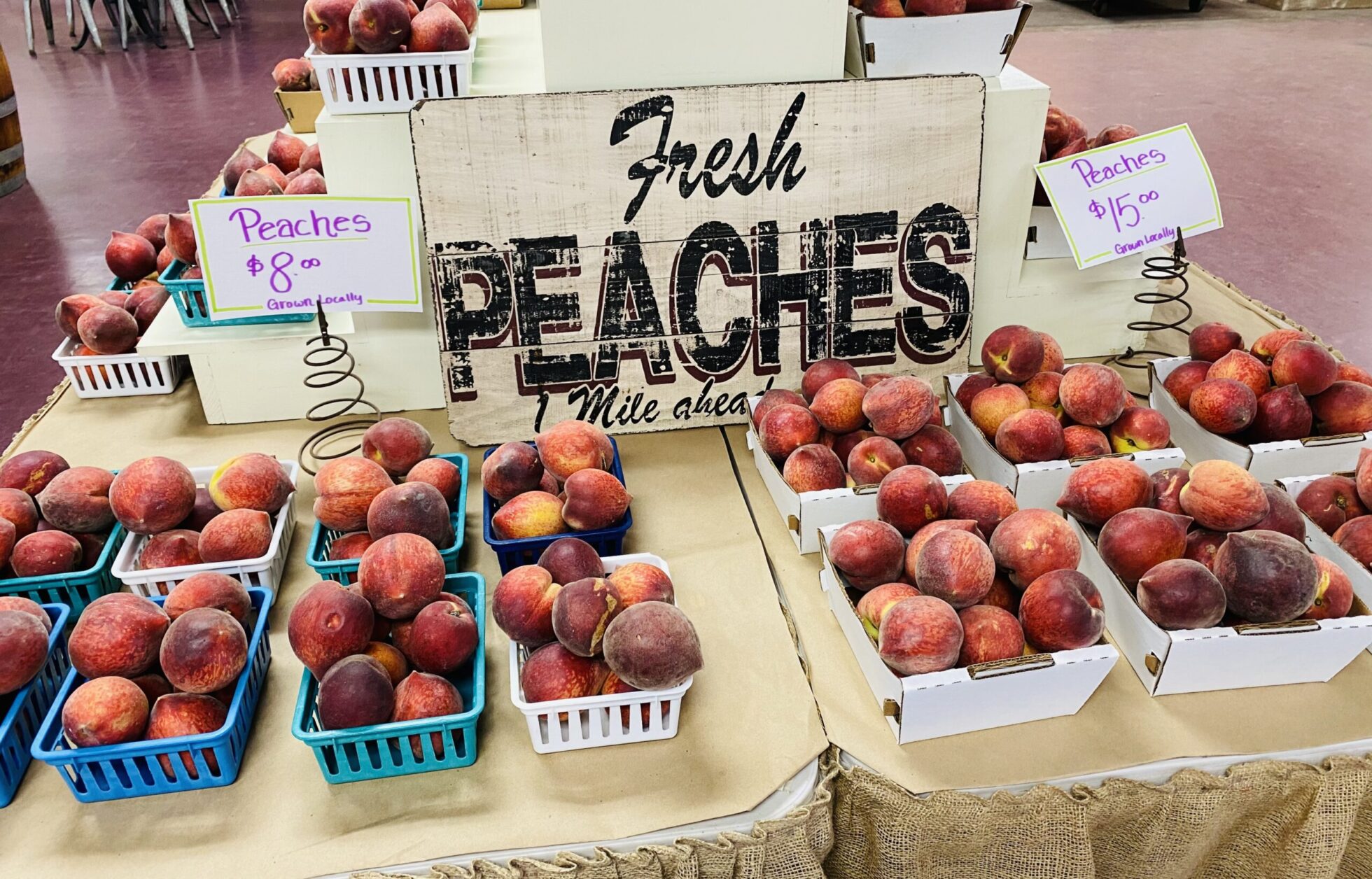 Burg’s Corner in Stonewall in May 2021. Photo by John Lumpkin

Despite the historic deep freeze across Texas in February, family-owned peach orchards are harvesting early varieties of tart fruit, with expectation for sweeter summer freestones to be equally bountiful. Roadside stands opened in May with few if any COVID-related restrictions, and Texas’ two popular peach festivals plan to resume after the pandemic forced cancellations last year.

“We are as close as you can get to normal and 100% open,” Richard Strange, manager of Ham Orchards near Terrell says. That means a Saturday visit now includes tables of the latest tree-ripened varieties from Ham’s 10,000 trees, live music, barbecue served on-site instead of take-out, and the return of soft-serve peach ice cream cones. Those are “the big things people missed” from 2020, Strange says.

Ironically, February’s record sub-zero temperatures and ice storms didn’t inflict significant damage to peach orchards in the Hill Country, Central Texas, or North Texas. Such weather may have even created conditions for abundant yields, due to the need for so-called “chill hours” for Texas peach blossoms to mature. 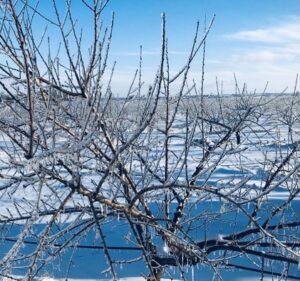 “We had never seen that kind of weather in our orchard during our family’s decades of growing peaches. We were unsure of what to expect,” says Kristen Restani, part of the current Duecker family’s generation operating Burg’s Corner in Stonewall. “It turns out the peaches loved the cold weather and set a 100% crop.” Burg’s will pick its first freestones in mid-June, while later developing varieties like Flameprince and Fairtime will extend this year’s season into September.

“I was very encouraged when we got moisture ahead of the cold,” says Jamey Vogel, whose 70-acre orchard is down the road from Burg’s in Stonewall. “That Thursday before it got so cold, we had about an inch of rain,” he explains. “That saturated the soil. And then we had rain and ice coating the trees and that actually provided a barrier. If it had been dry cold down around zero degrees, we would have been in big trouble.”

During the pandemic quarantine restrictions of 2020, Vogel and other peach farmers survived by taking phone orders and offering curb service at their stands. “We had a tremendous amount of road traffic we didn’t expect,” he adds. Already this year, “the road traffic is outstanding,” Vogel says. “There’s lots of pent-up energy, and it’s certainly noticeable on the roads.”

Jenschke Orchards is “expecting the best crop we’ve seen in several years,” according to Lindsey Jenschke. The Jenschke stand on US 290 east of Fredericksburg opened May 17 with clingstone varieties and other fresh produce like plums. As mid-June approaches, the Jenschkes were preparing to launch a “pick your own” option by advance reservation as freestones like Harvester, Cary, and Majestic ripen.

At Cooper Farms in Central Texas, “everything is the same old same old here after a year chocked full of change,” says Elizabeth Cooper Johnson, who manages the family’s store on Interstate 45 in Fairfield while husband Brady tends to 20,000 peach trees. Well, almost the same. The store and gas station has installed a new expresso machine. Cooper peaches, which grows 75 varieties, will be available through Labor Day.

Returning to normal as well are the annual Peach JAMboree in Stonewall, June 17-19, and the Parker County Peach Festival, July 10, in Weatherford. COVID forced cancellations of the two longstanding events in 2020. The 60thannual JAMboree features a rodeo, dance, peach eating and peach pit spitting contests, and a parade route along Stonewall’s Peach and Freestone streets. The Parker County festival, now in its 36th year, will draw as many as 60,000 people—the 2019 attendance—to downtown Weatherford for 200 booths of crafts, art and food, live music, a domino tournament and, of course, Parker County freestone peaches. Many of the peaches come from Hutton Farms’ 3,500 trees west of town and the Weatherford Farmers Market operated by the Hutton family.

The February freeze “was brutal,” says Gary Hutton, “but didn’t hurt my fruit. It did hurt my plumbing.” Just before the festival, he expects a freestone favorite, Redglobe, to arrive. “I’ve got quite a few of them this year,” he says.

The Hutton peach dynasty lost a generation last September with the passing of Hutton’s mother, Lafrieta, who with her late husband, Charles, purchased the farm in 1980. Gary Hutton’s grandson, Benjamin, turned 3 this month, though Benjamin is “more interested in his cars and dinosaurs right now” than peaches, Hutton says.