Tracking Elusive Mountain Lions in the Mountains of West Texas 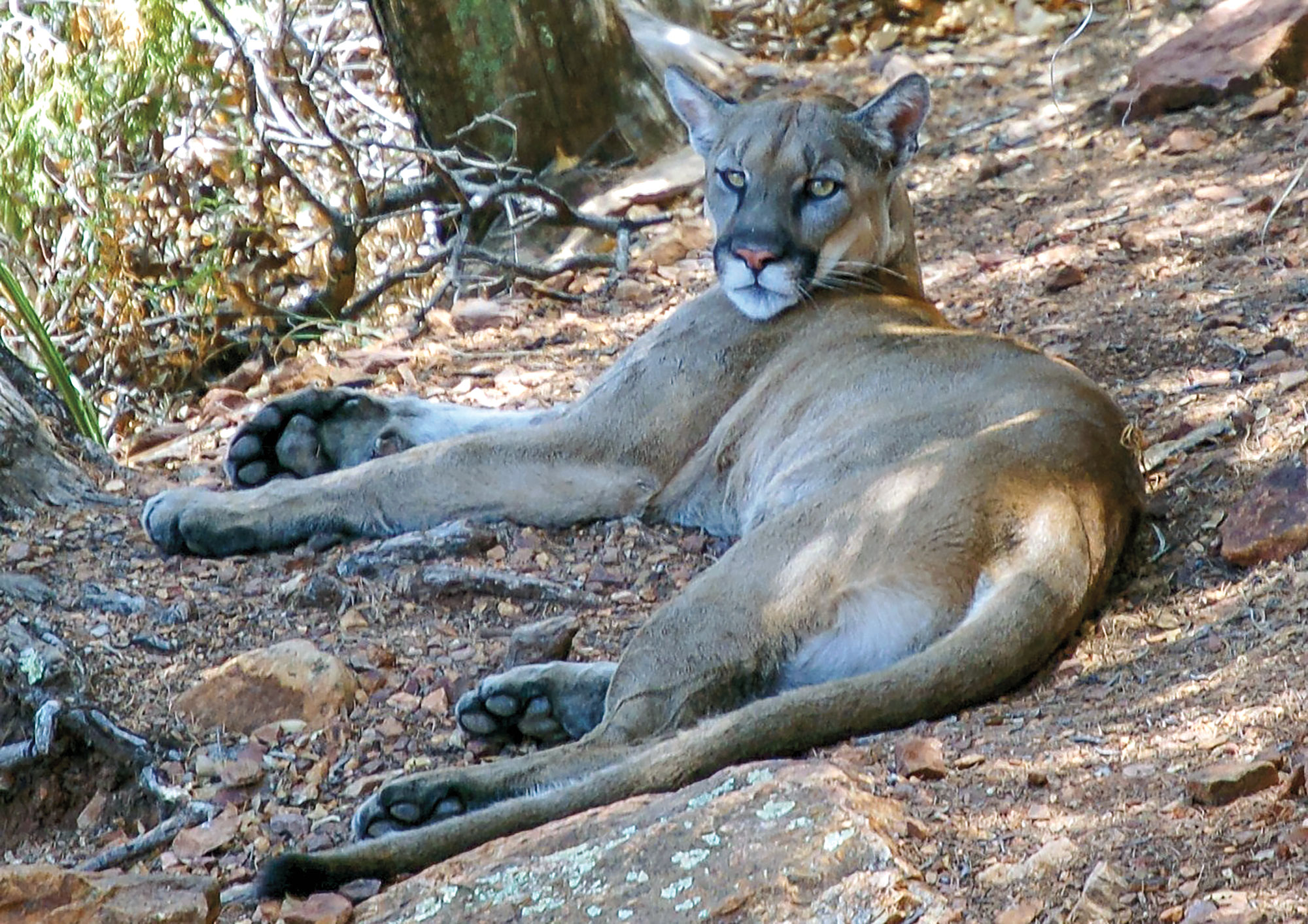 The cat has been gone for hours by the time Bert Geary comes upon the footprint. He sees it as our utility-terrain vehicle bounces over a rough ridgeline trail, the wind gusting over golden grass, heavy and cool with incoming August rain. The tracks are perhaps 5 inches across, clear and distinct. “It’s too big to be a bobcat,” Geary says, swinging out of the vehicle to examine it. “I think that’s a mountain lion. Young one, too. Maybe 60 pounds.”

Puma concolor is among the most charismatic of American mammals, and one of the most enigmatic. In centuries past, they ranged across the Americas, gathering a parade of names: cougar, puma, onza, catamount, panther. Farmers pushed them out of the eastern half of the United States, and ranchers pushed them out of the eastern half of Texas. In the early 1900s in West Texas, government-employed hunters and private citizens alike shot them; then, as now, lions had no formal protection under the law. But their ghostly presence still suffuses remote locales throughout West Texas, across ranches and public lands. They live difficult and secretive lives in the mountains and plains of the Chihuahuan Desert. Few are lucky enough to see them. But they’re there.

The institute’s project has found that while mountain lions venture throughout the desert, they like specific habitat and prey. They spend their days laid up on high ground in shady patches with good views of the surrounding countryside. Slopes of rough ground, scattered with boulders, steep canyons, and watering holes, are favorite hunting spots: The lion is an ambush predator by preference and hunts mostly at night using stealth and patience to slip close to its prey. It hunts anything from deer and javelina to feral pigs, skunks, and porcupines. Some evidence suggests that both sexes specialize in particular types of prey—the larger males attacking javelinas, the females pursuing deer. 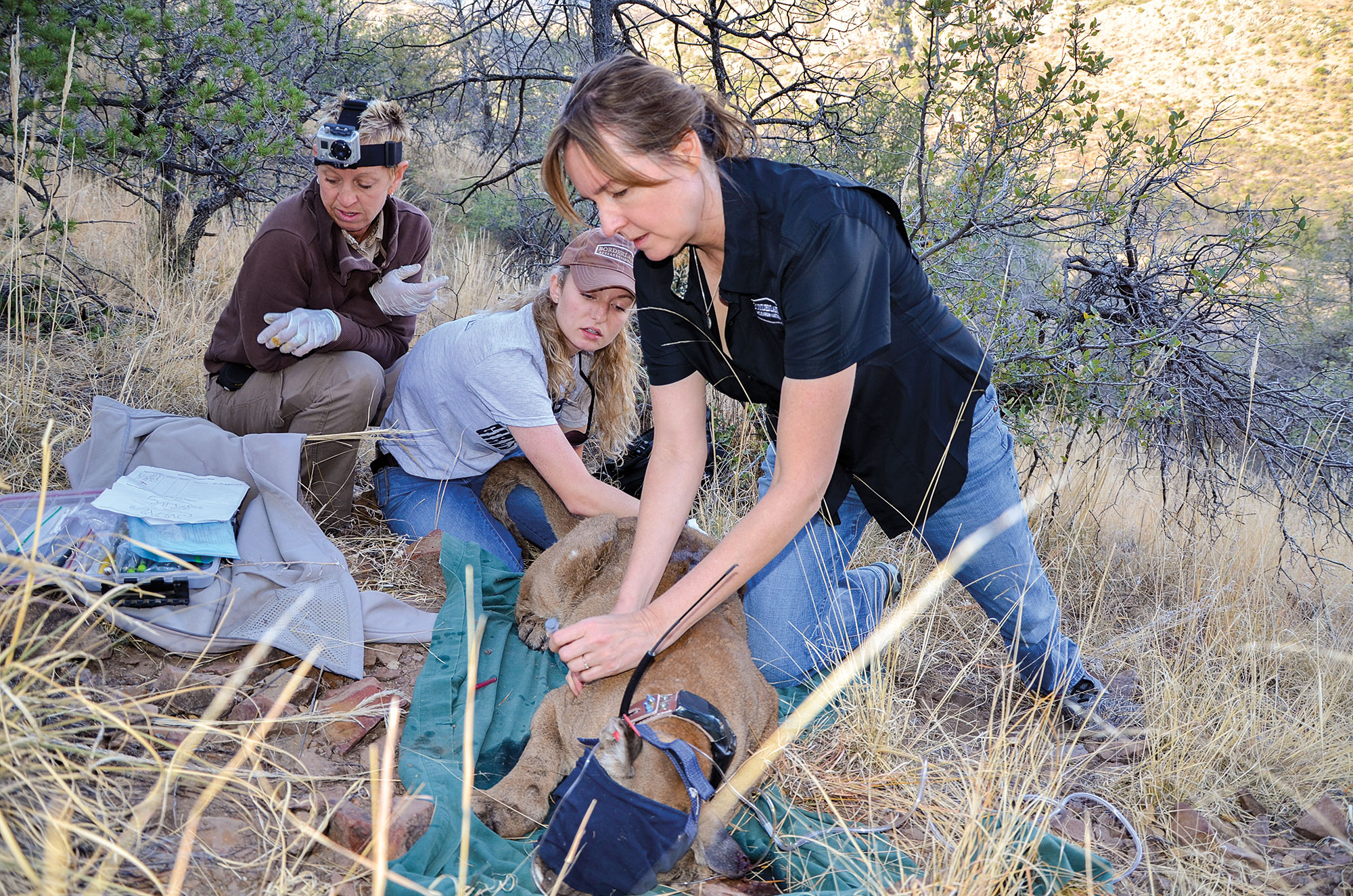 In areas like the Chisos Mountains, says Raymond Skiles, a retired Big Bend National Park biologist, mountain lions don’t always have their own way: Black bears sometimes bully them off of kills. The cats of the Davis Mountains don’t have that problem, at least not yet. But they’re still quite careful and secretive with their meals. Geary says he’s followed the GPS signal of collared cats and found large carcasses stored under dry leaves, hidden by the lion for later dining.

The GPS collars are also useful for studying how mountain lions establish home ranges, Geary says. At the age of 18 months, young mountain lions tend to leave their mothers, sometimes traveling hundreds of miles in search of a new home range. “It’s a difficult time for them, trying to find their own way, establish their own territories,” Skiles says. “Other mountain lions don’t want ’em around, and any place where the lion population is stable, there may not be much room in the neighborhood.”

The question of how mountain lions disperse is important to figuring out the species’ population dynamics in West Texas. In the eastern parts of the state, more mountain lions are occasionally seen as they return to their old habitats. But it’s not yet clear whether the overall population in Texas is increasing. Over the course of Geary’s several years working on the mountain lion project, only a few cats have left the Davis Mountains, and none have successfully made it out. According to GPS data, on two occasions, cats went north through the passes to Interstate 10, lingered for a day watching the highway, and then faded back into the mountains. Another female headed south from Alpine, moving across the desert into the Big Bend. About 200 meters from the Persimmon Gap entrance of the national park, she got thirsty, went to a stock tank on a neighboring ranch, and was trapped. Geary says it’s possible other cats are successfully dispersing or arriving in the mountains, but there’s no clear evidence.

“There’s been human pressure out here for a hundred years—sometimes more, sometimes less,” Geary says. “But it’s always been pretty constant out here. So is this a good healthy place for them, or a borderline place for them?” He ticks through the possibilities as he checks a trail camera alongside a babbling stream. Grainy images of foxes, javelina, and deer flicker past on a field tablet. No cats. He changes the batteries in the camera and hides a scent lure—a synthetic pill that smells horribly of rancid cheese—beneath a nearby rock. “Does it mean that there are cats here that are very successful and able to reproduce, or is there a lot of immigration coming from outside, either from Mexico or the Guadalupe Mountains? That’s a really big question: How important is immigration and emigration for populations here?”

“Does it mean that there are cats here that are very successful and able to reproduce, or is there a lot of immigration coming from outside?”

Even for cats that stay in the Davis Mountains, getting by isn’t a picnic. The rate of attrition for young lions is about 50 percent a year. Few mountain lions make it past eight years, falling victim to disease or starvation during droughts. The countryside is changing around them as open spaces have been split into a patchwork of smaller holdings, many of them with absentee owners. Now the cats wander across multiple properties, Geary says, some of them crossing 15 to 20 ranches a year. The cats don’t commonly attack cattle, though ranchers are wary nonetheless. “It’s kind of neat,” he says. “They just live out there and do their own thing, and you might not even know they’re there.”

Skiles, who worked in Big Bend National Park for more than 30 years, says most mountain lion sightings are a fleeting glimpse in the distance. “And that’s something to be proud of and thrilled about, and I think most people are,” he notes. On rare occasions, people do have close encounters, and a tiny minority of those are violent. Since the park’s founding in 1944, seven attacks have been recorded. Skiles says if you come across a lion that approaches or doesn’t immediately flee, the best strategy is to face it down: Shout, wave your arms, and throw stones. While mountain lions are accomplished hunters, he says, they’re surprisingly timid. It’s not hard to scare them off if you keep your nerve.

As Geary and I return to the ridgeline, following the tracks of the little mountain lion on our way up to the next trail cam, we keep our eyes peeled for that fleeting glimpse. We lose any sign of the trail halfway up the mountain—somewhere along the way, there’s a young mountain lion who slipped off the trail. It strikes me that studying mountain lions is a lot like studying ghosts, tracing the movements of something invisible, a force noticed more by its effects on the world than by its specific presence. Tracks, scrapes, day beds and kill sites, gray photos on a trail cam, the very occasional sighting of a tawny blur vanishing into the brush. The volcanic rocks of the Davis Mountains are haunted by cats, a contradictory symbol of both lost wilderness and its persistence against all odds.

While your chances of seeing a mountain lion in the wilds of Texas are vanishingly slim, museums around the state display replica or taxidermied animals and explore their lifeways and habitats.

Big Bend National Park: The Chisos Basin Visitor Center displays a replica mountain lion along with information about the life of one of the park’s most famous lions, a female known as F-07, which lived in the Chisos Mountains for 13 years until she died in 1992. The display includes her skull and monitoring collar, as well as photos.

The Witte Museum, San Antonio: A diorama in the McLean Family Texas Wild Gallery includes a mountain lion feeding on a deer. The exhibit describes the lives of lions among the mountains, rocky overhangs, and animal burrows of West Texas

The Houston Museum of Natural Science: The Farish Hall of Texas Wildlife includes dioramas of mountain lions in both prairie and mountain habitats. The exhibit also covers four other Texas wildcats: bobcats, jaguars, ocelots, and jaguarundi.