Plus, the Austin pitmaster gives tips for cooking meat to perfection 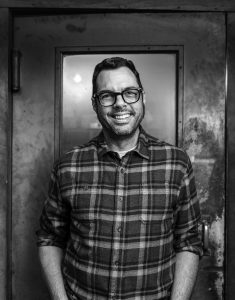 Pitmaster Aaron Franklin has famously said he rarely eats barbecue. While many folks dream of spending their days surrounded by brisket, consuming it on the regular isn’t advisable if you want to keep your arteries in working order.

That said, what the proprietor of Austin’s Franklin Barbecue usually craves is a fast-cooking cut of beef. “My relationship with fire and the nighttime is what got me into steak,” Franklin writes in the intro to his new book, Franklin Steak: Dry Aged. Live Fired. Pure Beef, out April 9 (Ten Speed Press). “The smell of a grilled steak is always refreshing, bright and less rich [than barbecue]…nothing ever seems to get in the way of my appetite for a good steak.”

Whether he’s cooking for his family or powering down post-shift, Franklin can often be found firing up his PK charcoal grill or heating a heavy skillet on which to showcase a cut of beef. With summer on the horizon, Franklin gives us the low-down on how to source and serve up the best steaks, whatever your budget.

What’s your favorite cut and why?

I cook hanger steak and bavette—also known as flap steak—all the time at home. It’s the bottom sirloin flap, which is historically a butcher’s cut, meaning it’s not as well-known but really flavorful. It doesn’t have a lot of marbling, but it still tastes great.

In your book, you joke that there’s, “a saying in the steak business: show me how you cook a steak and I’ll tell you who you are.” Who are you?

Well, I like texture, and I’m not a crazy fan of subcutaneous fat. I like a clean flavor and I prefer to grill bavette over a medium-hot fire to medium-rare, so it’s not too chewy. The grill also gives it a great crust. I don’t know what that says about my personality. 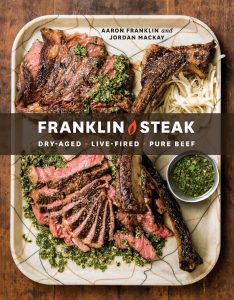 What are your favorite places to purchase steak?

The stuff you get in the supermarket usually isn’t that great; that meat could be from anywhere. I love Salt & Time here in Austin; they source from local and ethical ranches. I also like Whole Foods and Central Market. Grade isn’t the only thing to consider—sometimes a low-graded steak can be beautifully marbled.

What about someone who’s on a tight budget? Can they still enjoy steak?

Sure. Figure out a couple of offcuts—like flank, flat iron, or bavette—that you enjoy. Some cuts end up being cheaper because the demand is lower than the “popular” steaks.

I prefer to use all-natural briquettes when I grill at home. They’re free of accelerants and petroleum products. There’s all kinds of crazy fillers in the easy-lighting or self-starting varieties.

You’ve said that steak is “everyman’s food.” Why is that?

Cooking a brisket at home is an expensive and time-consuming endeavor, but steak is more readily available and requires very little in the way of equipment. It can be as simple as a random piece of meat over a campfire.