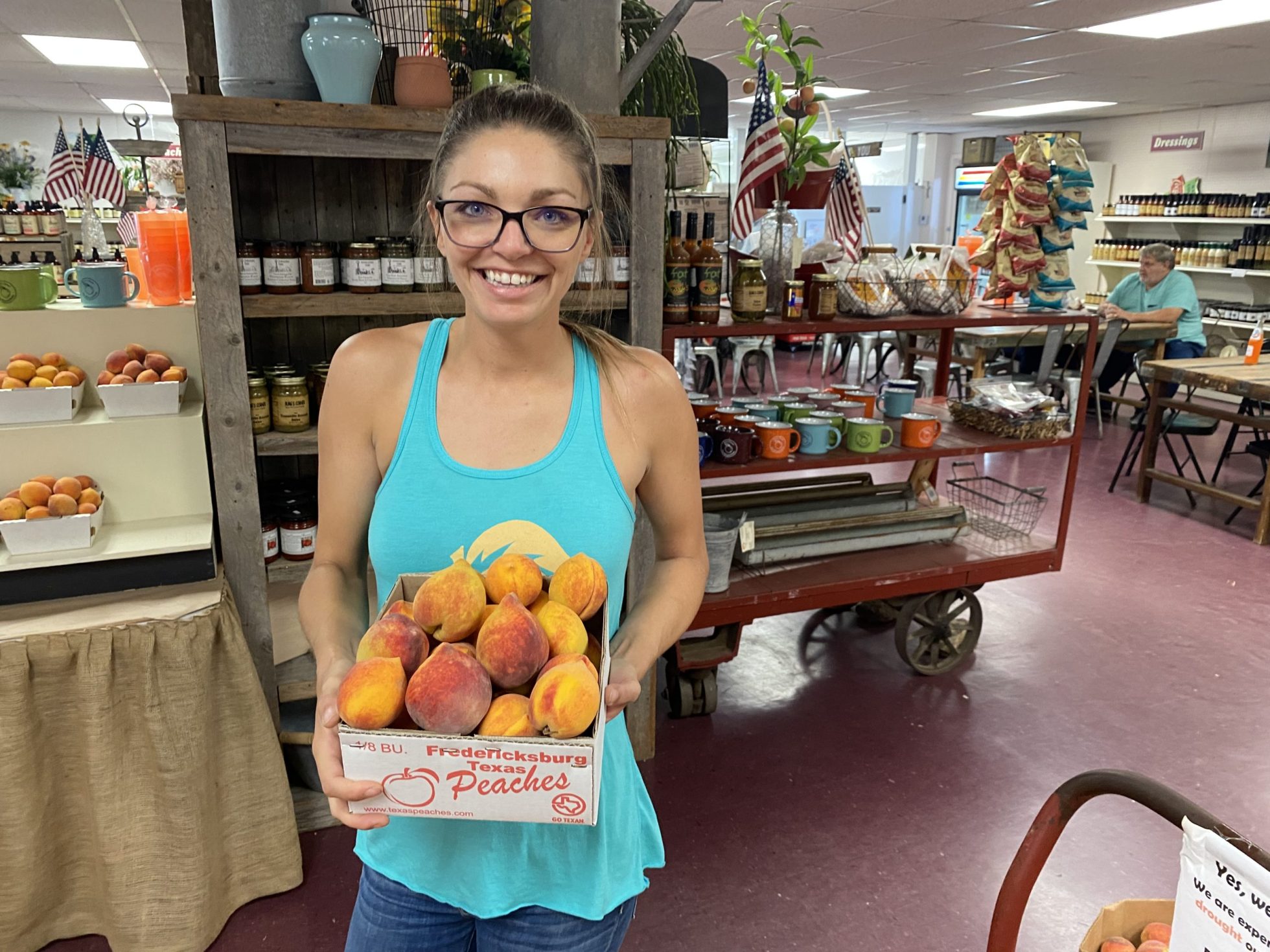 Kristen Restani, manager of Burg’s Corner in Fredericksburg, shows off some of this summer’s crop. Photo by John Lumpkin

Better late than never. That sums up the Texas peach crop in 2022. After a slow start this summer, succulent freestones are hitting the shelves of family-owned fruit stands throughout the state in ample supplies that may last through September.

“August is the new July this year with us being weeks behind normal schedule,” said Jamey Vogel, owner of Vogel Orchards along the peach-centric stretch of US 290 between Johnson City and Fredericksburg. “We are actually in the peak of the season right now,” he said last week, with popular freestone varieties like loring, bounty, and majestic being picked now instead of early to mid-July.

“The way to describe this is ‘weird,’” said Kristen Restani, manager of Burg’s Corner in Stonewall. “It’s not a bad crop—about 70 percent of a normal year—but we have never seen them ripen as late as this.”

The reasons for the late harvest include a mild winter that affected budding, which depends on “chill nights” (temperatures in the 40s or less); and the combination of an extended drought and almost two months of 100-plus temperatures.

Burg’s Corner, Vogel, and nearby Jenschke Orchards expect to sell freestones through September, as does Cooper Farms in Fairfield and Efurds Orchards in Pittsburg. Hutton Peach Farm west of Weatherford, Lightsey Farms in Mexia, Ham Orchards in Terrell, and Studebaker Farms near Fredericksburg will have peaches through mid-August and perhaps until Labor Day. 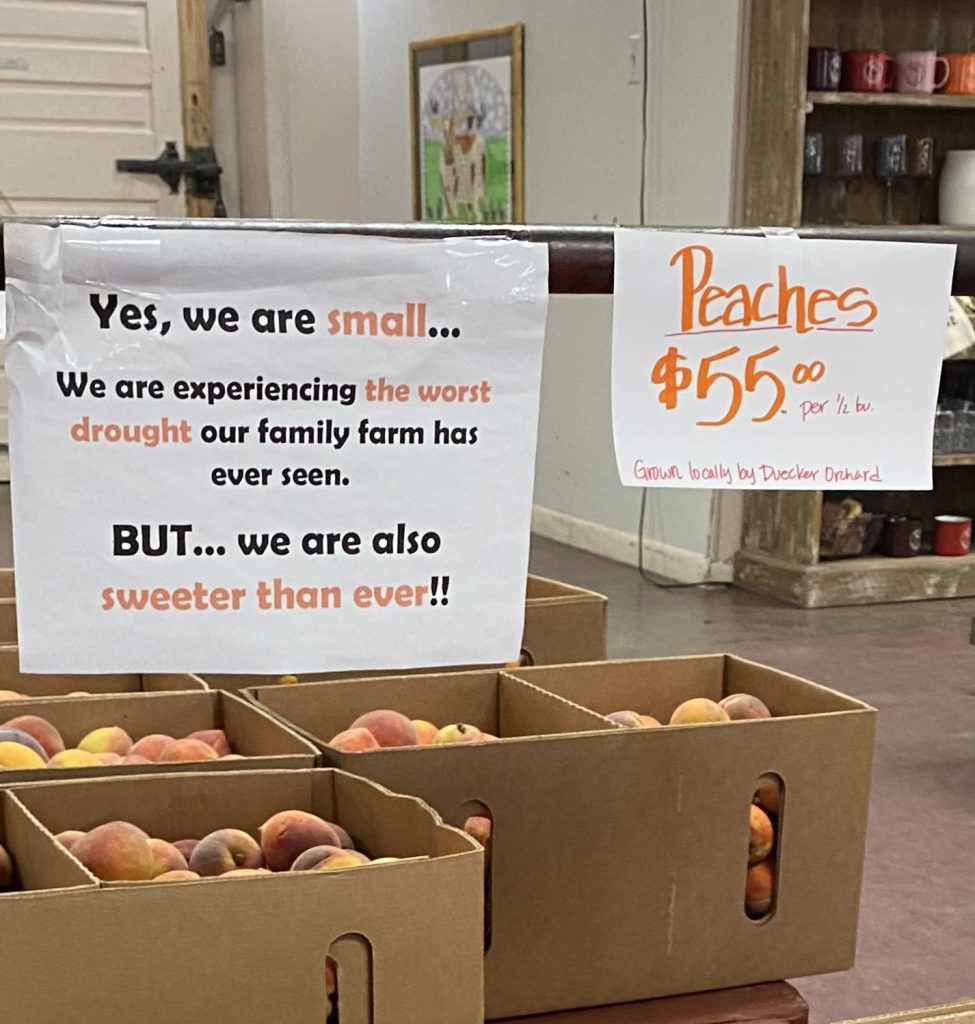 A sign at Burg’s Corner describes the relatively small size of this year’s peach crop. Photo by John Lumpkin

Another distinction this year: “The drought has caused the sugar content to be off the charts,” Barrett Jenschke said. Sweetness is measured by the industry’s Brix scale, with Jenschke Orchards’ readings between 15 and 20. “I can’t recall the last time we had a season when we had 20,” Jenschke said.

Neither can growers remember a Hill Country drought like 2022. “We have had 5 inches of rain since last November,” Restani said. “We are watering just to keep the trees alive, not to get bigger peaches.”

The 2022 crop’s exceptional sweetness comes with a tradeoff—the smaller size of individual peaches. “Everybody wants larger peaches because everything is big in Texas,” quipped Greg Efurd, who with his wife, Amy, and son Brantly celebrate the 50th anniversary of their family operation in East Texas. “We got good sizes with those that are irrigated and those that aren’t are smaller but still good… The drier it is, the sweeter the peach.”

Elizabeth Cooper Johnson, proprietor with husband, Brady, of Cooper Farms in Fairfield said a normal season sees a steady progression through varieties of freestones. “We would pick one variety every seven to 12 days,” she said, “but this year, it’s 10 different varieties at one time.”

“The peaches are smaller, and that’s kind of hard for customers to digest that, but they are really good,” she added. “We have picked more individual peaches this year than we ever had—it just takes more peaches to fill a box.”

My spouse, Eileen, and I can confirm that assessment. We finished peeling and freezing a half-bushel of Stonewall freestones we bought last week after following social media since June for availability. The fire prince and red globe varieties ranged in size from not much larger than a golf ball up to a tennis ball. They were so sweet that we kept sneaking bites between slices, the juices dripping through our fingers.

We also scored pattypan squash, cucumbers, melons, and vine-ripened tomatoes. The peach stands sell a variety of produce to help protect against the unpredictable fortunes of their primary crop. You can find information about the farms’ current inventory on their Facebook pages, while their web sites have more general information.

Lightsey Farms in Mexia takes such diversification seriously with its best-selling “Farm Box,” which is a $30 cornucopia of peaches, peppers, new potatoes, butternut squash, okra, or whatever is ripening. The Farm Box “was my dad’s idea, who passed away,” said Mary Lightsey. “His aspiration was to diversify the whole farm.” Peaches, Lightsey’s main crop, could last “a few more weeks,” she said as August approached; after that will be pears and then persimmons before a Thanksgiving closure.

“This has been a pretty challenging year due to the extreme heat and lack of rainfall,” said Robert Strange of Ham Orchards near Terrell. “Half the orchard is irrigated and that’s what saved us.” Ham’s traditionally closes in mid-August “when our high school kids—our main work force—go back to school,” Strange said, adding that Ham’s irrigation ponds might dry up anyway.

“Our crop is high quality but light, and we are selling limited volumes,” said Russ Studebaker of Studebaker Farms in Fredericksburg, which has been selling out by mid-afternoon.

“You wouldn’t have anything if you didn’t irrigate,” said Gary Hutton of Hutton Peach Farm in Weatherford, who called 2022’s crop “fair to medium.” Hutton picked peaches greener and smaller than normal to save them from July’s extreme heat, which affected the annual Parker County Peach Festival as well. “It was so hot that day that we had about half the crowd” as normal, he said.

Despite the challenges, Greg Efurd said 2022 has been “a really good year” for Efurd Orchards in Pittsburg, where well-timed irrigation also mattered. “I’m a gambler,” he said. “I don’t have to go to the casino. I’m gambling right here every day.”