Written by Tandem Web Co, Photographs by Hogaboom Road, Inc. | From the February 2018 issue | Updated: November 20, 2018 | Filed Under: DaytripperHiking + BikingThings to Do 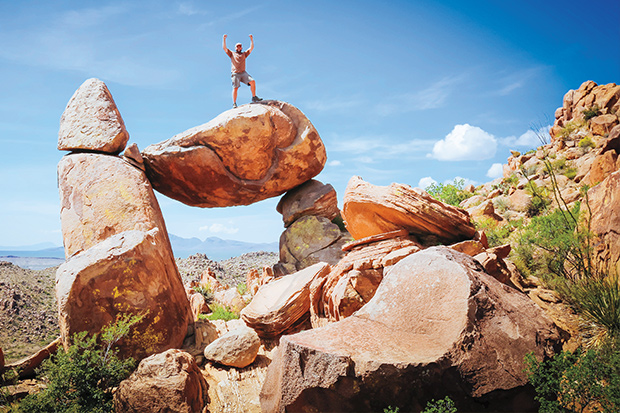 There is a place out west where the phrase “Everything’s Bigger in Texas” comes into its full meaning.

Chet Garner is the host of The Daytripper® travel show on PBS. To view the Big Bend episode visit thedaytripper.com

It’s a near-mythical destination where distances stretch and time slows down, a place that can be as dry as a scorching desert or as wet as a raging river. Those who seek great adventures need look no farther than Big Bend National Park.

8 a.m. After driving about 40 miles south from Marathon, I reached the north entrance of Big Bend National Park and pulled over to take an obligatory photo at the entrance sign. Although I had technically arrived, I still had 30 miles to go before I reached park headquarters. I rolled down the windows and reset my internal clock to match the unhurried pace of the desert.

9 a.m. At Panther Junction Visitor Center I strategized my plan of attack. What makes Big Bend so special beyond its unfathomable size (a whopping 801,163 acres) is the confluence of three diverse environmental features: desert, mountains, and river. I wanted to experience them all and spent the next hour studying maps and learning about the park’s history.

10 a.m. With a head full of facts and feet antsy to hike, I set out for the Grapevine Hills Trail on the desert floor. I was amazed at the diversity of birds along the way; reflecting the fact that Big Bend has more bird species that any other national park. After a mile of hiking past Dr. Seuss-esque rock pinnacles, I arrived at the famous Balanced Rock. It was a mind-bending exercise to imagine how a giant boulder found itself in such a precarious position. I figured if it hasn’t fallen in millennia, it probably wouldn’t fall today. With ranger approval, I scrambled atop for a photo.

12:30 p.m. Next, I headed for the Chisos Mountains. The prominent sign noting the presence of bears and mountain lions only added to the sense of adventure. It felt like I was driving vertically until the car crested a hill and I could see the entire Chisos Basin. It’s in this mountainous bowl where visitors sleep and eat at the famous Chisos Mountain Lodge. Since it was lunchtime, I stopped at the lodge’s restaurant and devoured an excellent plate of beef enchiladas.

1:30 p.m. After lunch, I walked over to the short, paved Window View Trail, which put me in the ideal spot to look out through the picture-perfect V-shaped gap in the mountains that looks out over the desert floor. I was surprised at how different (and cooler in temperature) this mountain hike felt from my desert hike, making it hard to believe that I was still in the same park.

3 p.m. With one major region left to experience, I traveled toward the Rio Grande, which cradles the edge of the park for an incredible 118 miles. I cruised the Ross Maxwell Scenic Drive past remnants of old ranches. I eventually arrived at the historic Castolon ghost town, which was once a small farming community along the banks of the river. I explored the adobe Alvino House and Harmonia Store, which the U.S. Army built as barracks during the Mexican Revolution. I didn’t expect such amazing human artifacts to be alongside the famous natural history of Big Bend.

5 p.m. The road turned right and began to track the river all the way to the stunning Santa Elena Canyon. A short hike put me on the banks of the Rio Grande, staring at the canyon walls rising 1,500 feet above the river bed. I skipped a few rocks across to Mexico and thought about how amazing it is to share such a wonderful region with our southern neighbors. Part of the magic of Big Bend is its ability to make anybody feel small compared to its seemingly endless expanses. While I had traveled plenty of miles, I had seen barely a fraction of the park. It’s this allure of awaiting explorations that brings me back for more. So whether you follow my footsteps or forge your own path, I hope to see you on the road.