Ancient Mosasaur Discovery Has Us Wondering Where Texas Ranks for Fossils 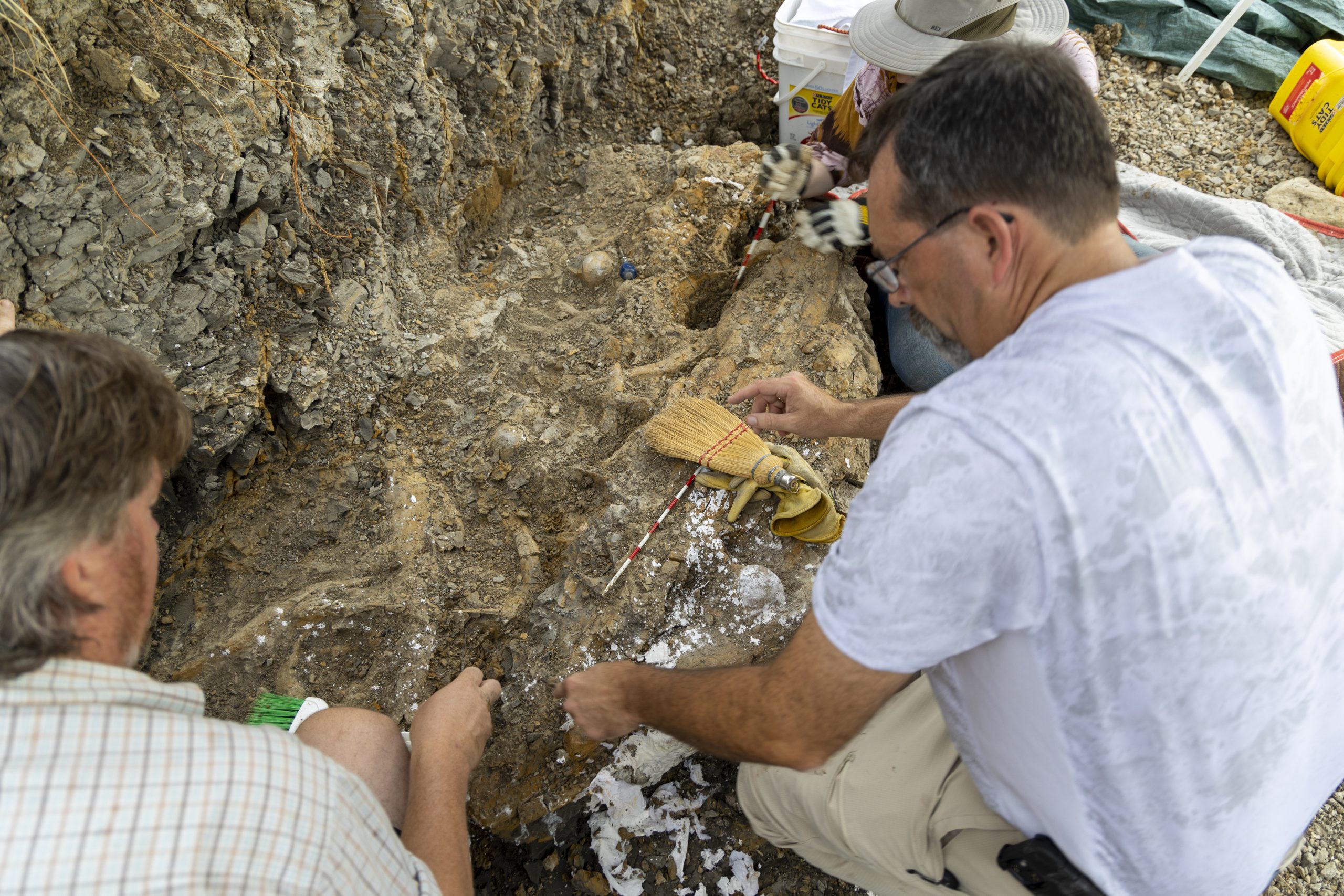 This spring, an amateur fossil hunter prospecting around the North Sulphur River happened upon a skeleton emerging from a streambed 80 miles northeast of Dallas. He recognized it immediately as something special—the partial skull and vertebrae of a mosasaur, a 30-foot-long prehistoric reptile. It was an exciting enough find that paleontologists and volunteers from Dallas’ Perot Museum of Nature and Science turned up earlier this summer to collect the remains, slathering chunks of bone-bearing rock in plaster and hauling them back to the museum.

As reported later in the Dallas Morning News, the mosasaur find was an exciting event. But it’s the kind of event that happens often in Texas, a state that paleontologists say is renowned for the depth and breadth of its fossil riches. “We have a really remarkable diversity of different kinds of fossils and different opportunities to find them,” says Ron Tykoski, curator of vertebrate paleontology at the Perot Museum. “It’s such a large state with so many different ages and kinds of rock.”

Matthew Brown, director of the Texas Vertebrate Paleontology Collections at the University of Texas, explains that “an enormous amount of rock strata are preserved and exposed” in Texas. Areas of geological uplift, weathered badlands, and meandering rivers systems across the state foster the constant new exposure of rocks and fossils,” he says.

That exposure is the key part. You need to have visible rock—the sort you find along creeks or in road cuts—to find fossils, says Brown. “Otherwise they would remain buried underground forever.”

The geological history of Texas spans rocks from 1 billion years ago to the relatively recent remains of ice age animals, Brown says. In between are rocks that record landscapes that changed wildly through time, leaving signs of advancing and retreating oceans, the rise of mountain ranges and volcanoes, and some of the most spectacular animals ever to walk the earth.

Each rock region in Texas contains its own set of lost worlds, Tykoski says. Go west of Dallas toward Abilene, and pretty soon you’re in the 280- to 290-million-year-old rocks of the Pennsylvanian, with its intricately detailed plant fossils, and the Permian, with long-fanged, sail-backed mammal relatives like Dimetrodon. Travel even further west—toward Caprock Canyon and the edge of the Great Plains—and you can find the remains of the Triassic ecosystems that emerged after apocalyptic Permian extinction, including some of the earliest dinosaurs.

Central and West Texas also preserve the remains of the warm inland sea that covered the center of North America during the Cretaceous period, some 80 million years ago. During the millions of years that much of the state was under water, Brown says, the seabed caught and fossilized the remains of everything from corals and mollusks to giant seagoing reptiles like the North Sulphur mosasaur.

But the state’s crown jewel of paleontology is certainly the harsh desert landscape around Big Bend National Park, which contains the ghosts of spectacular ecosystems toward the end of the dinosaur’s reign. From those rocks, paleontologists have pulled skulls of the giant crocodilian Deinosuchus and vast bones from the long-necked dinosaur Alamosaurus, one of the largest dinosaurs to ever roam the continent, as well as the remnants of Quetzalcoatlus, a flying reptile the size of a small aircraft.

The Big Bend region also contains evidence of the 66-million-year-old changeover between the world of the dinosaurs and the world of birds and mammals, Brown says. In the 12-million-year-old rocks of the Texas Coastal Plains, paleontologists have excavated bones from an ecosystem Brown calls “The Texas Serengeti,” which included rhinos, camels, ancient elephant relatives, and up to 12 different species of horse.

And, of course, there are the ice age mammals, which turn up from Lubbock and Amarillo to the famous Mammoth graveyard outside of Waco. “We’ve got giant bison and mammoth and ground sloths, dire wolves, saber-tooth cats,” Tykoski says. “You rattle off the list of big ice age mammals, we’ve got ‘em.”

“Not everything exciting is a giant,” Brown says. “From the skull of Rooneyia, one of the oldest primates on the continent, kittens of the saber-toothed cat Homotherium, found outside of San Antonio, to the small Miocene horses of the Coastal Plains, important things also come in very small packages.”

So, with this incredible wealth of extinct life, is Texas the best state to find fossils in? Somewhat surprisingly, Tykoski says, the answer is no. “We just have too much vegetation,” he says. “If you’re a fossil hunter, there are substantial swaths of Texas where your chances of finding something are low. I could hike around for miles and miles and never see a bare rock.”

There’s also the matter of accessing the land itself. Texas is mostly private land, so as a paleontologist, you have to negotiate with multiple different landowners—unlike states like Montana or Wyoming, where it’s easier to get a federal permit and then just wander around. “We have the resources right beneath our feet, but it’s not as easy to find stuff as it is elsewhere,” Tykoski says.

Finding something like a mosasaur at North Sulphur is thus a stroke of luck, and one visitors to the Perot Museum will be able to participate in: The plaster jackets containing the 80-million-year-old bones will be fast-tracked up to the museum’s publicly visible preparation lab, where—under the gaze of mounted dinosaur skeletons—visitors will be able to watch a piece of Texas’ rich prehistory be freed from its ancient sleep.