Meet Jennifer Welch, the realtor who converted the Bartlett National Bank into a place for travelers to rest their heads 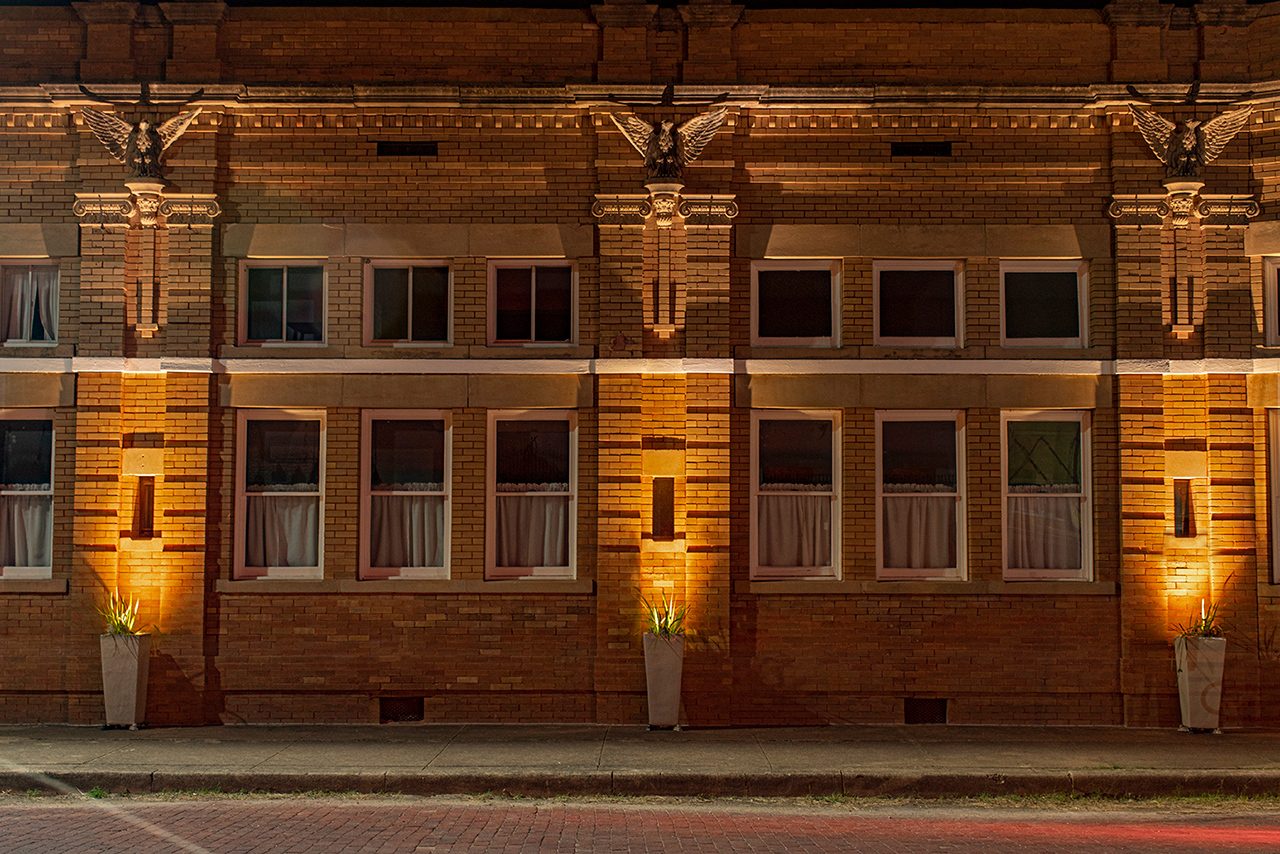 Bucolic is the first word that comes to mind as I step out of my car and onto a radiant, sun-warmed street in Bartlett on a lazy Sunday evening. Bucolic has several synonyms, including pastoral and idyllic, and that’s how Bartlett feels as I fetch my camera gear from the back seat under the watchful eye of a Siamese cat whose sleep on a fire escape I have temporarily disturbed. I’m here to meet Jennifer Welch, who converted the old Bartlett National Bank building into the Bartlett National Bank Guest House, a new bed-and-breakfast, as part of the Bartlett revival.

The Bartlett National Bank was established in June 1904 with $35,000 in capital. One of the officers of the bank was Bartlett namesake John T. Bartlett, who had a private bank that the Bartlett National Bank succeeded. The bank flourished alongside the town but, mirroring Bartlett’s fortunes, was buffeted by the Great Depression to the point of insolvency and closed in November 1934. The Bartlett Tribune wrote, “Organized by John T. Bartlett a half century ago, it has kept pace with the country’s development and has rendered honest and efficient service to thousands of people in this section. Its passing will be missed.”

And then the bank stood for decades, mostly unoccupied. Enter Welch, a realtor and broker from Cedar Park, who hails from Birmingham, Alabama. She is the owner of Amazing Realty and has been buying properties, restoring them, and selling them for 20 years. “By trade, I say I’m a real estate broker, but historical preservation and restoration is my passion,” Welch says when I sit down with her in the bank. 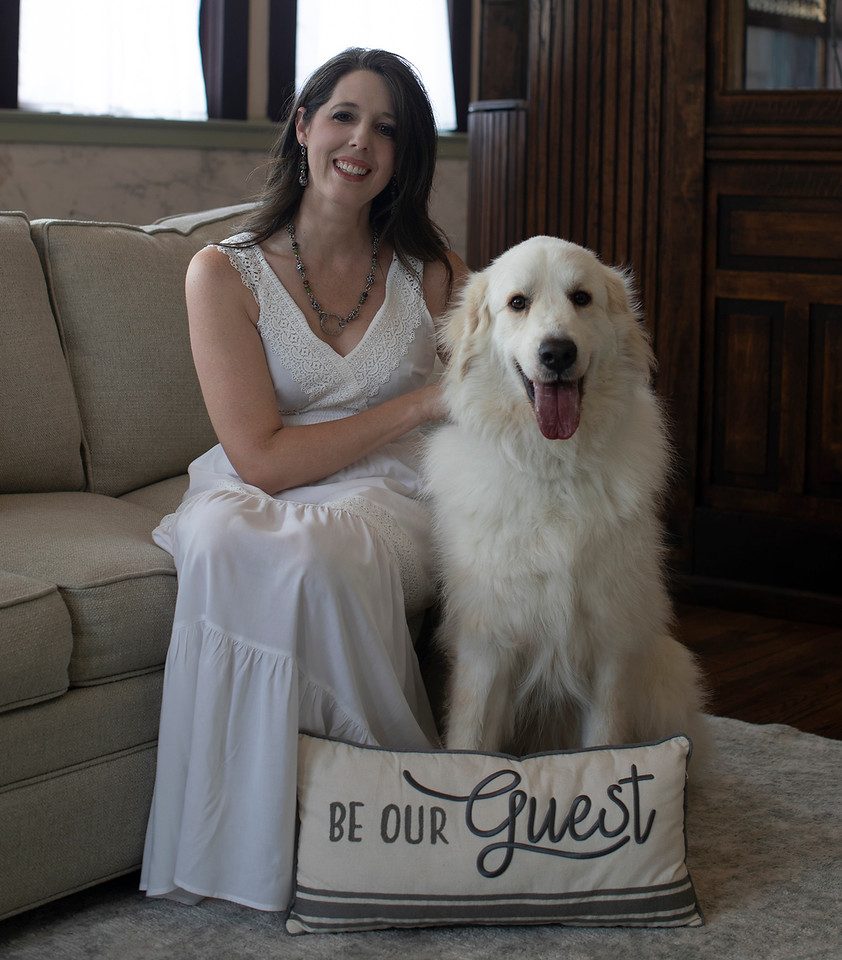 Welch and her awesome Great Pyrenees, Bartlett, in the former lobby of the Bartlett National Bank.

The Bartlett National Bank is one of the most fascinating projects Welch has ever worked on, she says, and along the way provided an opportunity for her to brush up on local history. “One of the interesting things is that, prior to the U.S. Mint becoming centralized in Philadelphia, certain banks had charters that allowed them to print money,” Welch says. “Bartlett National Bank was one of those few banks. The currency from that bank is extremely rare.”

Between 1934 and the early 1990s, a group briefly reopened the building as a bank. Sadly, the structure was damaged at that time. “It was opened for just one short year from what I understand,” Welch says. “They took out the original bank teller cage and put in a new second story.” But she got lucky: “They ripped out the original staircase but we found the wood. One of the men in town had done the job and still had the wood in his workshop. Because he knew where those pieces were, he gave them back to us and we rebuilt the staircase exactly the way it was, with the original wood.”

Still, figuring out the bank’s complete history has been a bit of a guessing game for Welch. Locals have passed on some stories that proved helpful. One of the more colorful ones occurred in the 1960s, when the bank had been abandoned for 30 years. “A team of robbers set up their getaway cars and attempted to rob it,” Welch says, “only to find out that although Bartlett had a bank, it wasn’t operational. So, it was the bank robbery that never was.”

Bartlett’s historic district comprises 34 buildings, 26 of which were constructed in the early 1900s and eight that were built during the 1920s—a time of economic prosperity for Bartlett. Collectively, the structures stand as excellent examples of standard early 20th-century Texas commercial architecture. This style, seen in many Texas towns, combines a three-bay façade with a central entrance bordered on both sides by large display windows. Each of the three bays is topped by two to four vertical transoms. Brick parapets with various amounts of ornamentation cap the buildings, something seen in many small Texas towns but preserved so well in Bartlett. 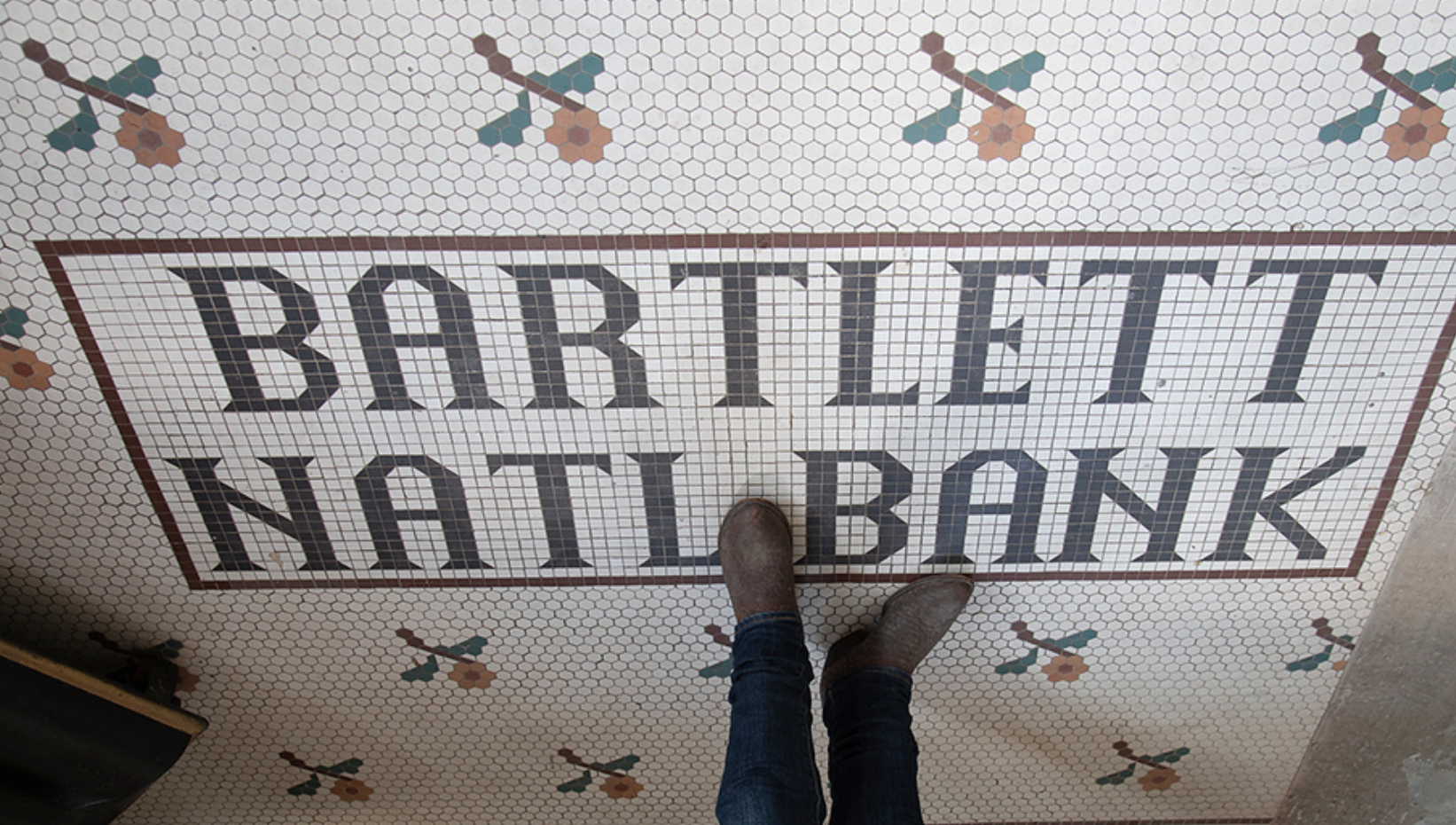 Jennifer Welch had an “aha moment” when she first saw the penny-tile floor in the bank.

There is one building that particularly stands out: the Bartlett National Bank, located at 200 E. Clark St. This edifice is the district’s most architecturally significant structure. It’s a cream-colored brick building that displays elements of Beaux Arts classicism: plaster eagles “perched” on the façade, brick pilasters with Ionic capitals, and brick dentils and cornice.

Welch had an “aha moment” the first time she saw the bank. “At the very front of that space, when you look through the door, you can see down to the floor where it says ‘Bartlett National Bank’ in tile,” she says. “And then to the left was the original safe, and I thought ‘Gosh, what I wouldn’t do if I owned this building.’”

After purchasing the bank, Welch and her team took six months to restore it. There were, of course, unanticipated issues. “We didn’t want to touch the original tile work, so we had to have part of the building tunneled under in order to get the plumbing and the electricity in the places we wanted.” Another problem arose because modern tile is quite different from historic tile. The “penny tile” that covers a good portion of the floor is no longer manufactured. “We actually had to have it custom-made, which took about 10 months,” she says. “Historic restoration and preservation are not for the faint of heart.” 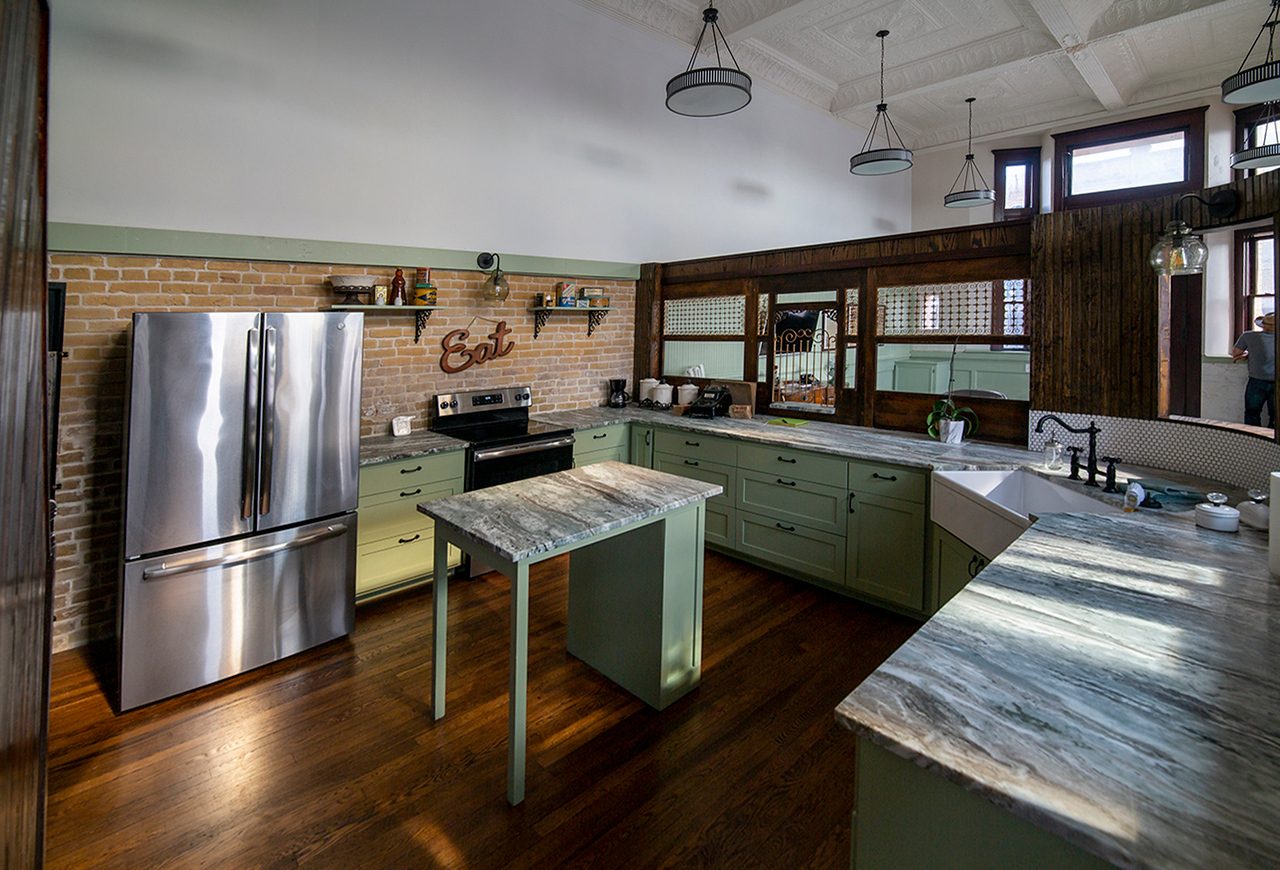 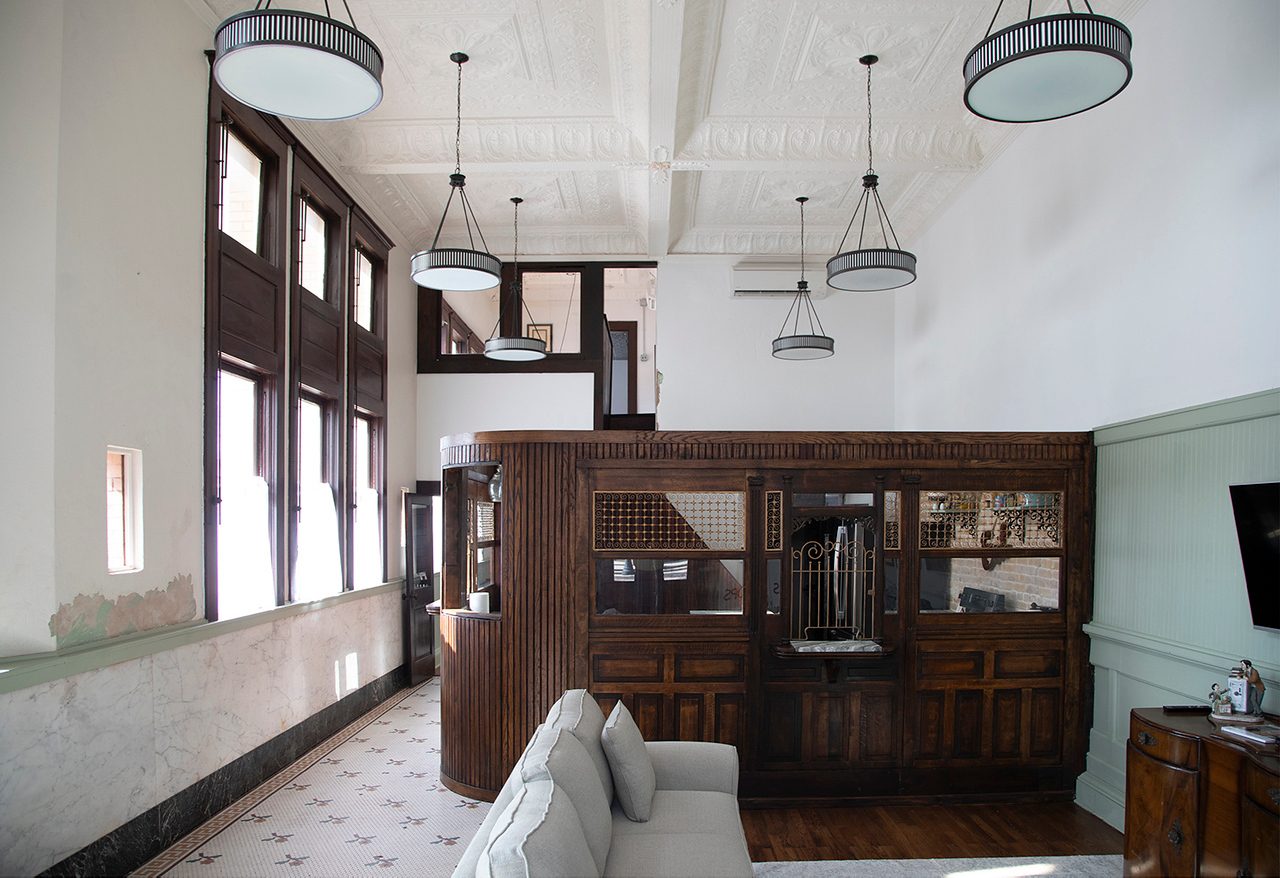 The interior of the former bank turned B&B is tasteful and subdued. The penny tile is a wonderful feature, but the most striking design element is the bank teller windows that separate the well-appointed kitchen from the sitting area in what used to be the bank’s lobby. The teller windows are not original to the bank but were recovered from a bank in Bells, just north of Dallas. Perhaps providentially, that bank was also built in 1904, and the teller windows from that bank are the same style as the Bartlett National Bank’s original teller windows. There are two guest bedrooms, each with a private bath.

It’s one thing to say you’re going to restore a town, as Robert Zalkin has envisioned, and quite another to do it. The Bartlett National Bank restoration is the first tangible step in the re-imagining of small-town Bartlett. And it appears to have only been a first step for Welch: She has since purchased the ramshackle First Presbyterian Church building, which was constructed in 1899 and comes with a historical marker. She intends to turn it into an event venue for weddings and other such gatherings. After seeing how good of a job she did on the bank restoration, I can’t wait to see what she does with it.

This is the third installment of Reimagining Bartlett, chronicling the transformation of a small central Texas town. Read the rest of the series here.