For These Livestock Auctioneers, Calling Is Their Calling

From knowing animals to getting the "chant" just right, this profession takes years of learning and practice 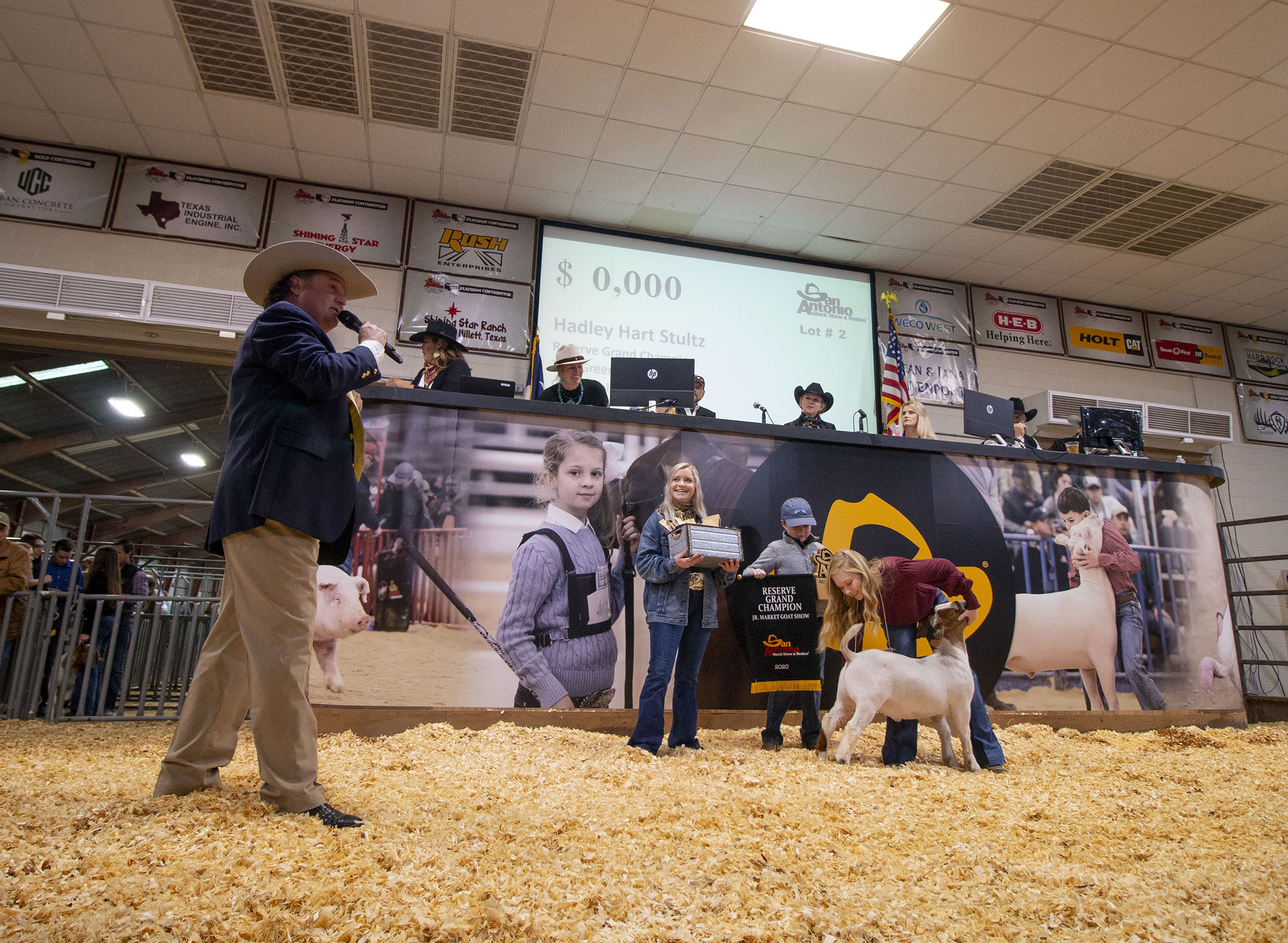 It’s one of the most familiar sounds at a livestock show: the auctioneer “chant.” This speedy, rollicking cadence is the hallmark speech pattern of the licensed professionals who call out the bids for farm and ranch animals. But nobody wakes up one day and says, “I’d like to be a livestock auctioneer,” and starts working in the business right away. Not even if he’s a good fast-talker. No, this is a job that requires practical experience and years of practice, partly to perfect the chant.

When you enter an auction barn, the energy of a livestock sale emanates from the guy behind the microphone. These weekly cattle auctions take place across the state, from Amarillo to Abilene and San Augustine to Shelbyville. But even if you’re not in the livestock world, chances are you’ve witnessed this frenzy at a youth livestock show, such as those that, in normal times, happen in late winter at the San Antonio Stock Show and Rodeo and the Fort Worth Stock Show and Rodeo. The business in progress represents the livelihood of farmers and ranchers, present and future; and it’s the job of the auctioneer to sell plenty of animals for the top dollar possible.

“It’s nothing for one of us to sit down and sell 1,200 to 1,400 head of cattle in an hour,” says Troy Bradshaw, auctioneer at the weekly sale in Abilene and one who fills in occasionally in places like Coleman and Decatur. Learning everything possible about cattle and what qualities make them appealing to a buyer is essential. “Sounding pretty is part of the job, but knowing what you’re selling is much more important. When I’m selling a cow, I need to be able to read what a farmer wants.”

Bradshaw and his colleagues came to the profession working up through the livestock business. Growing up all over Texas and now living near Fort Worth in Lipan, Bradshaw got his first break as a 17-year-old hauling horses to auction. The auction house folks knew him and let him sell a few horses at the end of a night when someone needed a break. About 20 years and plenty of auction jobs later, it’s his life’s work.

A familiar voice at the San Antonio youth livestock show is C. Jason Spence’s, the one you hear when kids bring goats, lambs, and pigs they’ve raised to sell. Spence travels from his home in New Braunfels also to auction steers, poultry, and other animals at the State Fair of Texas in Dallas, San Angelo, Odessa, Fort Worth, and Houston. He’s even sold livestock as an auctioneer across the United States, in Canada and Mexico, and as far away as the Netherlands, South Africa, and Australia—earning about 2 million travel miles in the process.

He found his way to the job by growing up in a family involved with livestock for more than a century. “It’s all I ever wanted to do since I was a little kid,” says Spence, a native of Tahoka in the Panhandle Plains, where he was involved in 4-H and the FFA and became a licensed auctioneer at age 18. He went on to earn agriculture degrees at Texas Tech and Oklahoma State.

Spence has adjusted to the auction world that’s had to transition to online sales, where live bidding makes it possible for sellers and buyers to do business remotely. But it’s the in-person shows that he enjoys most, because he likes to see the kids who are learning their way through the agriculture world. “The work is so rewarding because it’s a way for me to use my talent to benefit kids as they learn a sense of responsibility and stewardship,” he says. “I appreciate the life skills that are benefits from the [youth agriculture] programs.”

The passion for seeing the farmers and ranchers of tomorrow succeed also drives Doak Lambert, the famous voice at the Fort Worth Stock Show and Rodeo’s Junior Sale of Champions for more than two decades. That’s the sale that annually raises nearly $5 million for young exhibitors bringing their steers, pigs, goats, and lambs to show. (The 2021 show, which would begin in January, has been canceled because of COVID-19.)

“It’s the most gratifying thing, seeing the kids’ hard work pay off by getting [them] money for college or to buy more animals,” says Lambert, of Decatur, who’s flown more than a million miles to auction livestock at shows across the nation since beginning the work in 1988.

Like many colleagues, Lambert worked in the cattle business after getting his animal science degree. He grew into the auctioneer role gradually, working as often as opportunity allowed and even going to an auctioneer school in Kansas City, Missouri. Loving the livestock world is essential, but he says it’s also about the two-legged animals as well.

“We really are in the people business, maybe more than the livestock business,” Lambert says. “The friends I’ve made at sales, that’s what gets me excited about the next auction.”

As for women auctioneers, there are very few. Bradshaw, who qualified for this year’s World Livestock Auctioneer Championship in Nashville—which was postponed by the pandemic until next summer—says we may eventually see women in livestock auctioneering. He knows several who are excelling at automobile auctioneering, but the livestock business is still rather patriarchal. And though he initially found it hard to make a big break into the work, he likes helping those who want to try.

“It was a struggle for me for a while, so I am a big advocate of letting young auctioneers have a shot,” he says. “I tell them to go and be around the auctions, learn and take every chance you can to get behind the microphone—even if it’s selling cupcakes at a church fundraiser auction.”