Hop Aboard One of Texas’ Historic Original Wooden Carousels 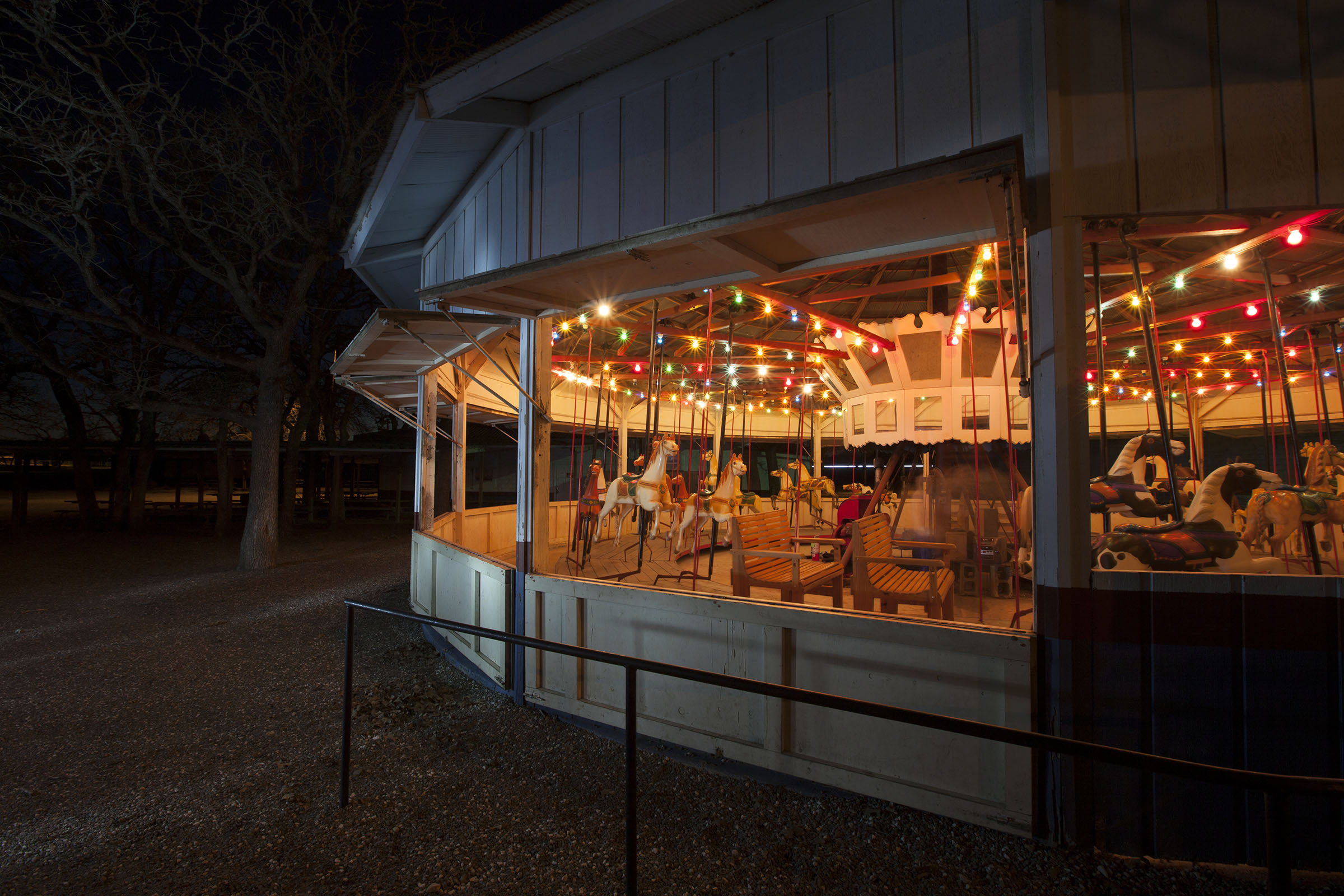 Big wooden carousels featuring horses and other creatures have been fixtures in the United States for almost 150 years. At one point, thousands of them were operational across the country, housed in city parks, amusement parks, traveling carnivals, and other places people gathered.

These days? The numbers have dwindled considerably. In Texas, there are only eight wooden carousels left, six of them operational. But they are still enjoyed by children, parents, and fans of antique carousels (also known by some as “merry-go-rounds”).

In Brenham, Fireman’s Park is the place to find the Flying Horses, a C.W. Parker classic wooden carousel built in 1910. Crystal Locke, community services specialist for the city of Brenham, says the carousel made its debut at the Washington County Fair in 1932 and has stayed ever since. It costs $1 per rider on weekends.

“It certainly is a historical piece within our park and something the community has really gotten behind,” Locke says. “So often we take our kids to see antiques and old items, and they’re in glass boxes or have signs that say, ‘Do not touch.’ We’re fortunate that our community has supported the carousel for so long and you can actually bring your family and ride a piece of history.”

The Brenham carousel is not to be confused with another carousel 30 miles down the road in Giddings, also housed in a location called Fireman’s Park. That carousel was built in 1915. Other Texas spots with operating carousels include Fair Park in Dallas, Six Flags Over Texas in Arlington, the San Antonio Zoo Kiddie Park, and Traders Village, also in the Alamo City.

Park operators have a resource in the National Carousel Association, which keeps a database of all the carousels across the country. The association helps carousel owners with information on maintenance, repair, and especially preservation, the main goal of the organization, which has about 500 members. Worth noting is that carousels in the U.S. and those made in Europe tend to differ—as the United States became industrialized, our carousels were built bigger and more elaborately.

Patrick Wentzel, president of the National Carousel Association, says the other distinction between carousels is whether they were built as permanent structures, or made “county-fair style,” which meant they were built to be portable and travel with carnivals. Some carousels, he says, are housed indoors in climate-controlled environments to preserve the wood, or at least covered to protect the rotating animals. In recent years, wedding venues have invested in carousels as one of their Instagram-worthy attractions.

The appeal of carousels, Wentzel says, is cross-generational. “I got interested when I was little, I always loved them. You go to almost any carousel and you see little kids riding, and old people riding, remembering them from when they were kids. For kids from the inner city, who didn’t grow up around a farm, it’s a way to throw your leg over a horse and get to ride them.”

Wentzel adds it’s not quite a dying art, but building carousels has become more limited since Mansfield, Ohio-based Carousel Works, the primary builder of wooden carousels, went out of business last year. These days, Wentzel says, carousels are still being built, but they’re typically made of fiberglass and are built-to-order. “The costs can get pretty high because it’s a real skill,” he says.

Locke says Brenham has every intention of keeping the carousel going round and round for as long as possible. “As long as our efforts continue to take care of the horses,” she says, “it can be a gem that families today and future generations will be able to enjoy.”

Round and Round They Go

San Antonio Zoo Kiddie Park
3903 N. St. Mary’s St.
210-734-7184
Instead of horses, the popular attraction features a menagerie of Texas animals like a whooping crane and white-tailed deer. Rides are $3 per person.

Six Flags Over Texas in Arlington
2201 Road to Six Flags
817-640-8900
The Silver Star Carousel, designed by carousel maker William Dentzel, was built in the mid-1920s and introduced at the amusement park in 1963.