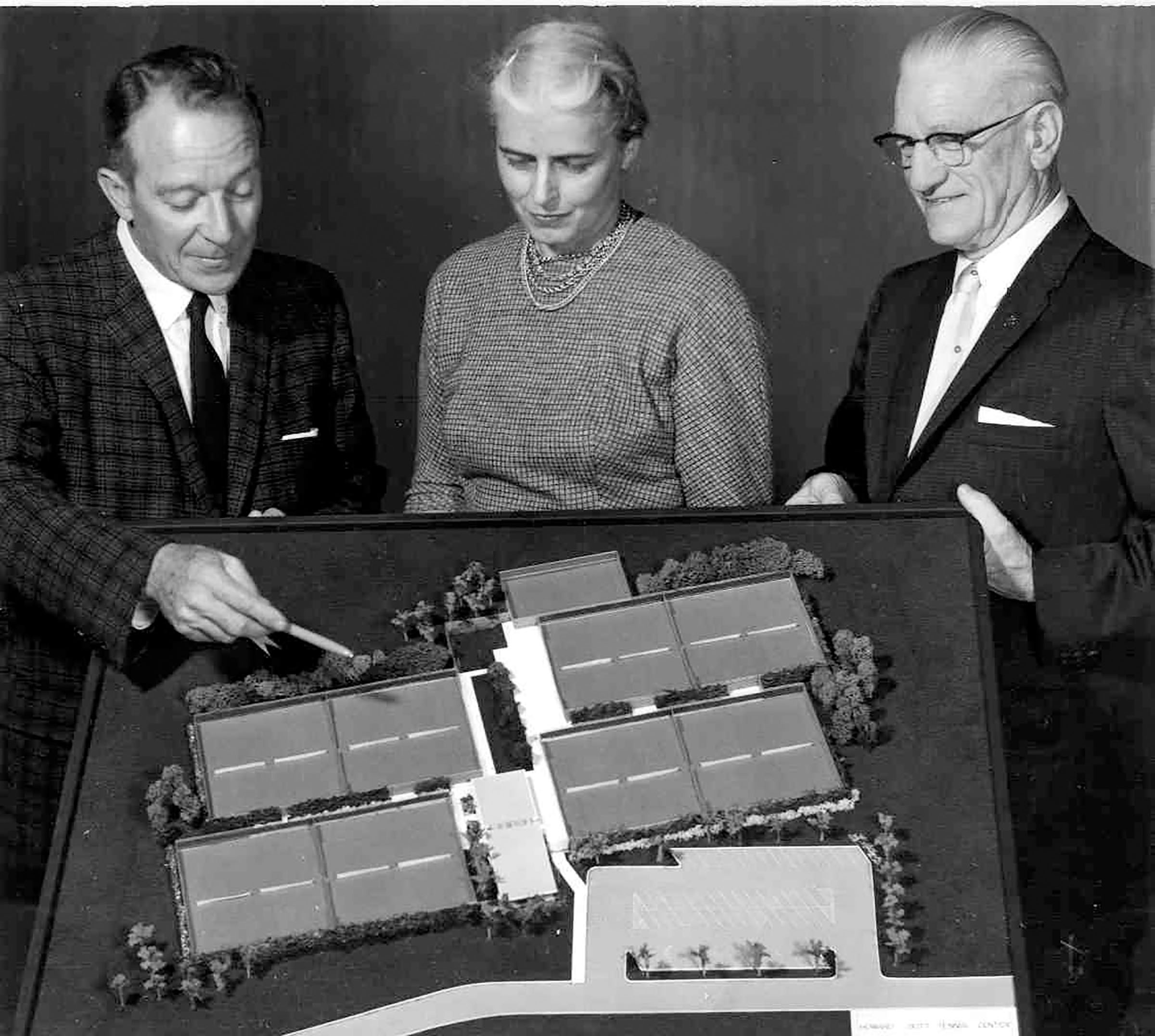 Howard E. Butt Sr. (right) and his wife, Mary, look over plans for the new H-E-B Tennis Center in Corpus Christi, circa 1960. Photo courtesy of Texas Tennis Museum and Hall of Fame.

It’s a sunny afternoon in Kerrville, and a group of about half a dozen teenage boys and girls stand near the baseline of a tennis court at the H-E-B Tennis Center, located off State Highway 16. They take turns returning tennis balls fed to them by an instructor positioned at the service line on the other side of the net. One by one, he critiques their strokes and offers words of encouragement.

“That’s the way. That’s nice spin. Now follow it in, follow it in. Perfect, nicely done,” he says as a player hits a few balls then scampers off the court to make way for the next player to take his turn.

During their lesson, the kids are probably not thinking about the history of these courts or the man who helped build them, Howard E. Butt Sr. They may not know he grew up in the town and learned how to play the sport on a makeshift court in an empty lot, because there were no tennis courts in Kerrville when Howard was a youngster in the early 1900s. But what these kids do know is that the courts bear the name of the grocery store company he founded, H-E-B.

Beloved in Texas, H-E-B recently received national recognition, including articles in the New York Times and the Washington Post, when it gave away food for free during February’s devastating winter freeze. It was just another example of the company’s reputation for generosity. Many Texans, however, are unaware that the store’s philanthropic efforts go back decades. During one period, the company built tennis courts, swimming pools, and other recreational facilities in communities like Harlingen, Mission, New Braunfels, and Fredericksburg.

It all started with Howard’s father, Charles. C.C., as he was called, moved his family to Kerrville in 1905 for health reasons. Back then, the town was considered a sanitarium for disease, says Marcus Goodyear, director of communications for the H. E. Butt Foundation, which Howard founded with his wife, Mary, in 1933.

“Kerrville was marketed as the Texas Alps,” Goodyear says. “It drew people from all over this area of the country who had tuberculosis, including Mr. Butt Sr.’s father, who moved from Tennessee looking for a warmer climate with clean air.”

Shortly after moving to the Hill Country, Howard’s mother opened a grocery store, Mrs. C.C. Butt’s Staple and Fancy Grocery. Young Howard helped his mother by delivering groceries in his red toy wagon. She would become the sole earner of the family when C.C. died 10 years after they moved to Kerrville.

Following a stint in the military, Howard returned to his hometown, got married, and took over the family business. In 1926, he began expanding it, buying existing markets like Piggly Wigglys and opening stores in Del Rio, Laredo, and other South Texas towns. He relocated the store’s headquarters, first to the Rio Grande Valley, and later to Corpus Christi. By 1953, when the store celebrated its 25th anniversary, it had 2,000 employees and 60 stores. The company eventually settled its operations in San Antonio in 1985.

Along the way, Howard and Mary founded the H.E. Butt Foundation. Its mission was to provide medical, educational, and recreational resources in the South Texas communities where they had stores.

Influenced by his father’s health struggles, Howard brought his passion for healthy living, mental wellness, and physical fitness to the foundation. He loved tennis and swimming (according to H-E-B lore, he swam every day in the Guadalupe River for a year), and wanted to share those activities with people who didn’t have access to them. Meanwhile, Mary, a former teacher, brought her interests in child welfare, libraries, and mental health. She eventually became the first woman on the state’s mental health board.

“She toured all of the mental hospitals and kind of took it upon herself to lead reform of some pretty dire circumstances that the mentally ill were living in, trying to return dignity to them,” Goodyear says.

Together, when they weren’t pioneering efforts for the early diagnosis of tuberculosis or providing hearing and vision tests to children, the couple set out to bring tennis courts and pools to towns. In 1959, their dream came to fruition when the foundation donated 8 acres of land and a $70,000 interest-free loan to the city of Corpus Christi for the construction of the first of nearly a dozen tennis centers in Texas. 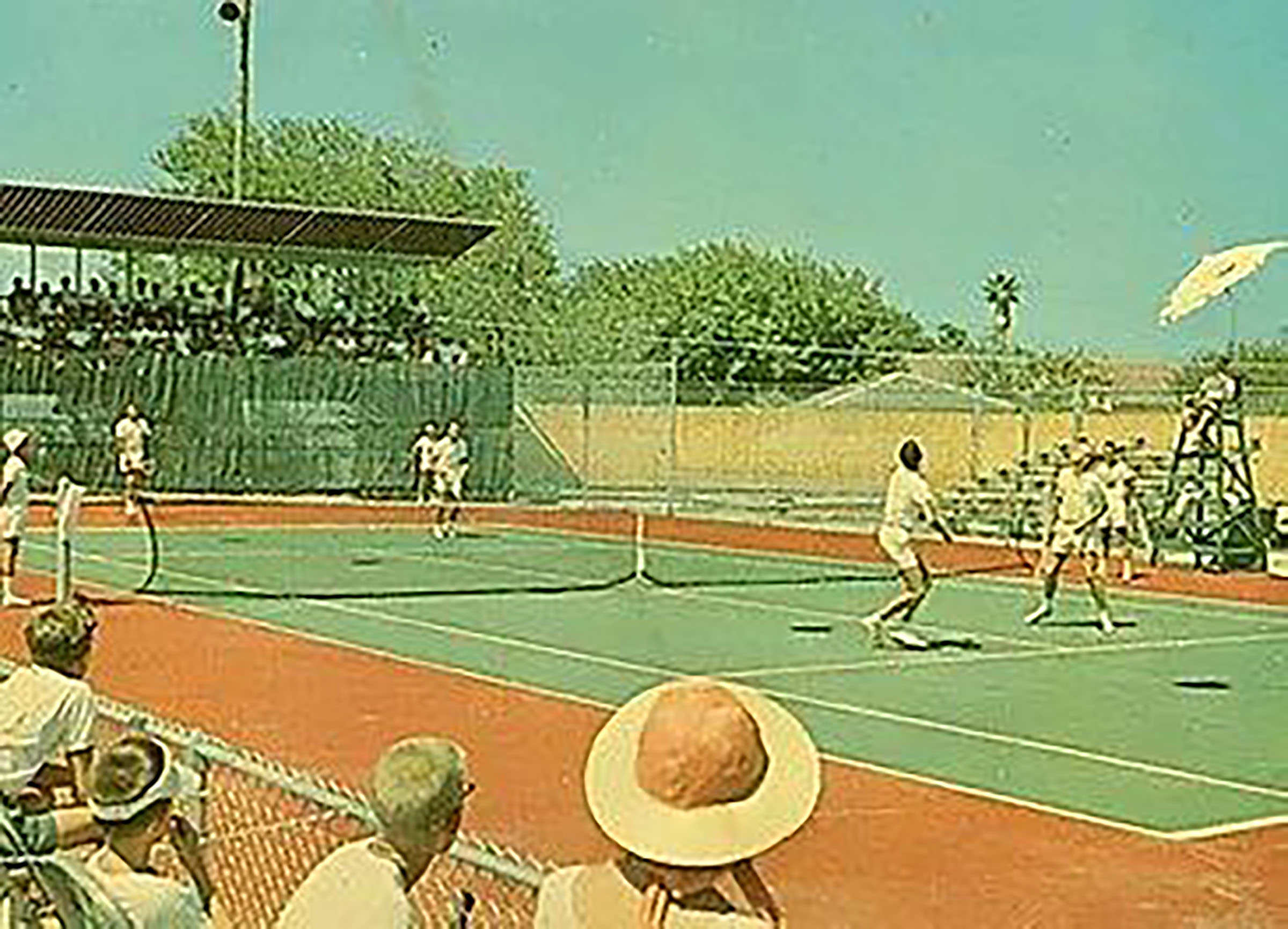 Opened a year later, the facility had 12 courts, a pro shop, lockers, and instructors. The fee to play started at 40 cents for 90 minutes. The center began hosting the Buccaneer Days Tennis Tournament, described as “South Texas’ biggest tennis extravaganza” in the Corpus Christi Caller-Times. By 1964, the center was attracting more than 600 competitors to the Texas Open Championships. One of those players was Howard Butt III, who was listed as the second seed in the Boys 12 and Under division. Howard’s grandson would go on to be a nationally ranked Top 10 junior player and a member of the Trinity University team that won the National Championship in 1973.

In a 1969 profile in the Corpus Christi Caller-Times, Howard III, then a junior in high school, explained how he grew to love the sport like his grandfather and father, Howard Butt Jr. “I didn’t really take up the game seriously until I was about 9 when my father built a court in back of our house,” he said. “I became even more interested in the game after H-E-B Tennis Center was built. The center created a lot of interest in tennis here as more and more took up the game.”

As the sport’s popularity grew in the ’60s and ’70s, more H-E-B tennis facilities were built. Harlingen, Donna, Edinburgh, Victoria, and Pharr also became budding tennis communities with the help of the foundation. Howard’s influence was being felt throughout these regions and in the sport.

In 1982, Howard Sr. was inducted into the recently opened Texas Tennis Museum and Hall of Fame in Waco for his contribution to tennis in the Lone Star State.

“Most people don’t realize how instrumental he was in making Texas tennis what it is today,” says museum board member Sara White. “We actually have an amazing history, and a lot of players, especially young players, don’t know about it. I grew up playing tennis all over Texas and I would play at these facilities with names like the H-E-B Tennis Center, and I didn’t really think about why it would be named that.”

Unfortunately, a shift came around the 1990s. Tennis’ popularity started to wane in this country. So, too, did the number of H-E-B tennis and other recreational facilities. The H.E. Butt foundation turned its focus to other programs, including the camps it runs in Leakey, which the Butts founded in the 1950s, and its more recent community-driven programs, like the capacity-building cohorts it offers to several nonprofits in San Antonio, which aim to develop leadership and resources that will help them grow their organizations.

Although many of the old H-E-B tennis facilities have been torn down or built over, of the ones that remain, like in Harlingen, Kerrville, and Corpus Christi, they continue to attract tennis players.

On this afternoon in Kerrville, more people pull into the parking lot of the H-E-B Tennis Center. Wearing tennis attire, they unload their gear and head to the courts, set against the city’s hilly landscape. With pops and thwacks echoing through the air, you can imagine Howard Butt Sr., looking over the center he helped build, saying, “Perfect, nicely done.”

This year is the 40th anniversary of the Texas Tennis Museum and Hall of Fame, located in the Texas Sports Hall of Fame complex in Waco. “We’re actually the only state that has a physical tennis museum and hall of fame at the state level,” says board member Sara White. Once located in a house, the museum moved into its current space after a group of other museums came together to form the complex. Following a renovation in 2015, the museum is now housed in 2,000 square feet and offers a collection that showcases the evolving history of the sport in Texas, from vintage equipment to exhibitions that feature the Battle of the Sexes match between Billie Jean King and Bobby Riggs in Houston, the current winners of UIL championships, and the latest hall of fame inductees. Managed by a small board of volunteers, the museum hopes to give tennis fans a chance to “immerse themselves into the story of Texas tennis,” White says. “We have amazing tennis here in our state and it’s important to us to tell the story.”