In Odessa, the Transformation of Aging Shopping Mall Signage into Striking Public Art

Artist Ray King and his team worked for five months to overhaul the old sign into the Odessa Spire. 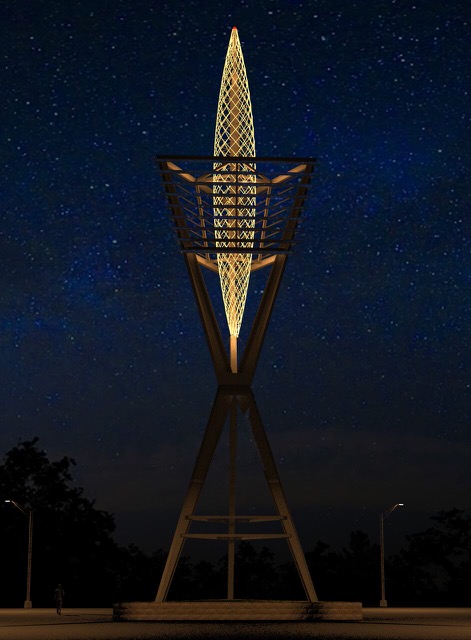 A piece of Odessa history is shining with new life as the Odessa Spire. A project of the nonprofit Odessa Arts, the project transformed the old Cloth World sign into a striking lighted sculpture at the corner of 10th Street and Maple.

Standing at 110 feet, the midcentury design includes a 60-foot spire with 48 strands of programmable LED lights inside the top of the formation. The spire lights nightly from sundown to midnight.

“I say that I changed it from a chicken to a rooster,” jokes Ray King, the Philadelphia artist who created the spire. The public art committee chose King’s design from among more than 75 proposals. They cited his intent to honor the existing structure while also modernizing it.

During its heyday in the 1950s, the tall structure was the signage for the Rock Hill Springs Shopping Center before it became the Cloth World sign in the late 1970s. Odessa Arts Executive Director Randy Ham says community members have often suggested repurposing the old sign. The Odessa Spire enhanced the sign for a new generation. 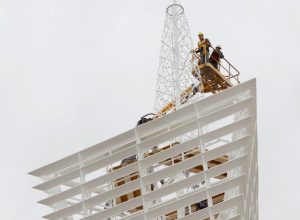 The sign is part of the a public arts master plan adopted by the City of Odessa in 2014. Before the spire could be installed, Odessa Arts raised money to stabilize the sign’s foundation. After local philanthropists Toby and Sondra Eoff donated the $100,000 for repairs, fundraising efforts snowballed with other donations from foundations and residents.

King says the project team built scaffolding to work inside the structure, which swayed in the wind, and put together a complex puzzle of steel and cables.

King was astounded to see his creative vision take shape. “It was a little bit emotional because it was a dream, an idea, from five years ago,” he says. “And now suddenly, here it is, a reality.”