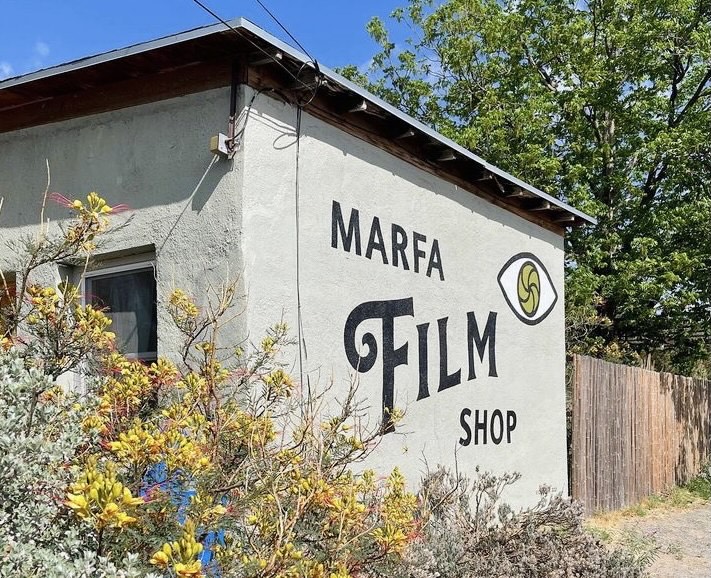 For lifelong film enthusiast Sara Button, photos taken on a phone just don’t do a memory justice. So in 2019 when she moved to Marfa, a town known for its artistic prowess, she was “shocked” to find that no one had yet opened a film store.

In a poolside conversation last May, the Denton transplant lamented to a close friend how inaccessible film seemed to be in West Texas. Even if she acquired film, there was nowhere to have it developed and she’d still have to ship it out of town. “Maybe you should just open one,” her friend said. And four months later, Button did just that. She emptied her savings, bought a 125-square-foot “micro adobe” on San Antonio Street, and opened the Marfa Film Shop.

“I went to school for visual merchandise at UNT, and I still, even as a college graduate, would have never dreamed of opening my own store,” Button says. “I think it was a bit of luck and being in the right place at the right time.”

The shop’s name adorns its gray exterior in black along with its logo: an eyelid with a closed camera shutter. Inside, shelves are filled with developing equipment, vintage SLR cameras, and fridges full of film. Believe it or not, Button says, a couple of local photographers have actually offered to buy out all her fridge stock.

Button’s passion for film photography stems from its tangibility. Unlike digital, she says, analog photography offers a variety of ways for users to keep a memory they can touch and feel. Whether through negatives that can be stored and saved or instant cameras like Polaroids that develop small photos in a matter of seconds, film provides a few things that pixels can’t. “Photography has made a comeback because people want that memory,” Button says. “They want to physically hold it.”

Rather than catering to an online market, the shop only sells photographic equipment to locals and travelers passing through. Button hopes that by doing so she can spark a love for film in the same community that she says has welcomed her with open arms. “It was a really important goal of mine when I opened the film shop that we are able to serve our local community and anybody that is coming through town as well,” Button says.

The shop has partnered with the local school and little leagues to shoot photos in addition to hosting sunset photo walks and a rent-a-camera program that has particularly been popular with travelers on their way to Big Bend National Park.

Button also aims to start her own initiative focused on making portrait photography more accessible. The East Texas native used to help run a Help-Portrait event in Denton, where local photographers and volunteers gathered at a community location for a couple of days and offered family photos and headshots for free. She is currently working with others in town to try and bring a similar version to Marfa. “Portrait photography is so expensive and having a photo of your family or yourself at any given time is a valuable thing,” Button says.

But there’s still one last piece of the puzzle to completing Button’s dream store. The shop is currently raising funds for a darkroom projected to be up and running by the fall. Still, at times it feels “surreal” for Button who can vividly recall her first memory with a film camera in her hands—a middle school trip to the Smithsonian Museum.

“At that age, I could have never imagined all this,” Button says. “Ten years from now though, I hope the shop has become somewhere anyone can come and get their picture made or where any artist in the community can come and have a safe space or refuge. I just hope the shop keeps sparking local interest in film photography; it already has.”