Meet the Texas Town that Became the Pumpkin Capital of the U.S.A.

It all started with a farmer in Floydada; plus, where you can buy pumpkins and enjoy other fall activities 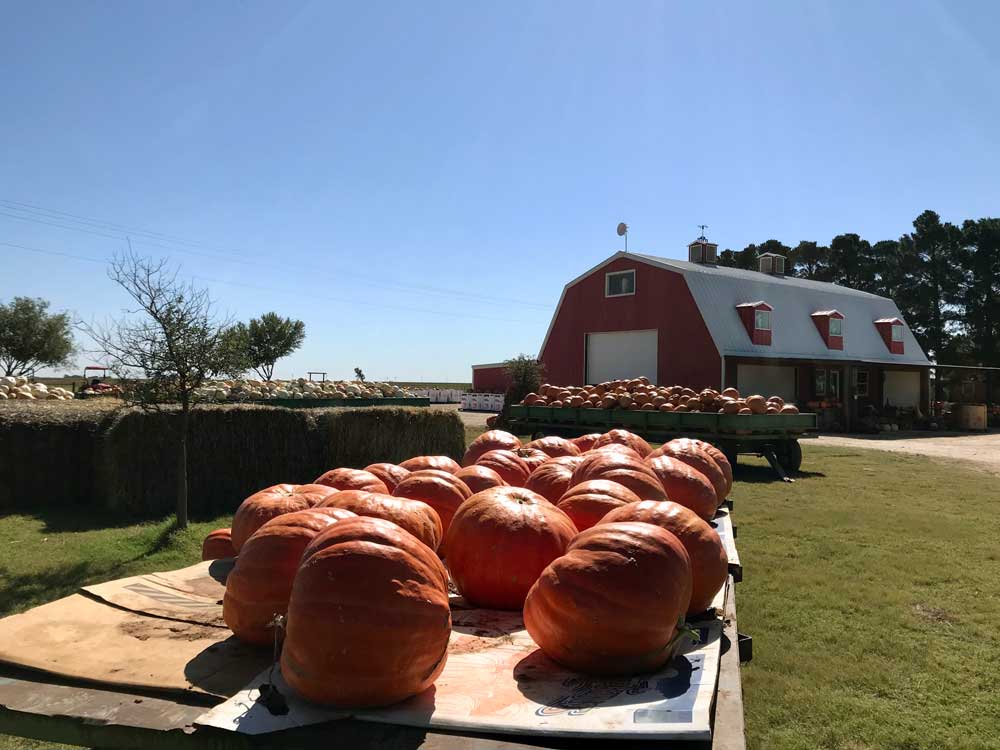 In 1541, Spanish explorer Francisco Vázquez de Coronado led an expedition through Texas, spending the winter in the High Plains region near what is now the town of Floydada, about 50 miles northeast of Lubbock. According to legend, Coronado and his crew, verging on starvation, sought sustenance from the native tribes in the area, who fed the men on what is now considered a celebrated staple in these parts: the pumpkin.

This is the first mention of the famous winter squash in Floydada, today known as the Pumpkin Capital of the U.S.A.—revered for a dry, cool climate that’s perfect for growing the fall delicacy.

Back in its heyday between the 1960s and ’80s, pumpkin farming in the region yielded millions of pumpkins on 30-plus farms. Now, there are only about four farmers raising squash varieties on 1,000 acres each year. Yet, despite the decline in numbers, these farmers still produce around 2 million pumpkins a year.

“I think pumpkin farming is like car racing, rodeo, basketball, or yoga,” says Tim Assiter, whose family has been farming pumpkins here since the 1960s. “It gets in your blood.”

The history of the Assister Punkin Ranch begins with the wife of a close family friend and farmer named “Uncle Slim” Robertson. She convinced her husband to plant 5 acres of pumpkins one year, and the couple started selling the harvest at roadside stands. They were so successful, they eventually expanded to the vegetable brokers in Dallas and then grocery stores out east, where it’s too humid to raise pumpkins.

Robertson, considered the founder of pumpkin farming in Floydada, taught Assiter’s father everything he knew about the squash. Today, the Assiter’s family-run farm grows about 150 different varieties of fall items, including the famous orange jack-o’-lanterns kids flock to collect each year, as well as rarer red, blue, and pink pumpkins.

No one pumpkin looks the same, Assiter says. The biggest one they raised grew to 300 pounds. As for the farm’s name, Assiter explains that it’s a twist on the word pumpkin, as well as a country farmer term. “If you’re talking to your husband, you’d call him a punkin,” he says.

Farmers in Floydada begin planting pumpkin seeds in mid-May and harvest them about 120 days later in September—cutting the pumpkins off of vines sometimes 30-feet-long when their skins are hard enough to endure tossing them onto shipping carts and they reach their mature color.

“Every pumpkin is handled six to seven times before it is put on a truck to go to a grocery store,” Assiter says. “It takes a tremendous amount of labor.”

This year has been a tough one for many reasons. The farm relies on workers from South Texas, which has been battered by hurricanes, resulting in many laborers finding work through construction jobs. Add to that a number of 100-degree days and less rainfall than normal, on top of a pandemic, and it’s been challenging to say the least. Pumpkins require a ton of water, and they don’t take to the heat kindly, according to Assiter.

“We efficiently apply our water and resources in a way that we are very fortunate,” he says. “We have 70 years of experience, and that experience of course pays off very well. We have the right farmers with the right attitude.”

But Assiter notes that the oddest thing by far about 2020 has been the huge demand for pumpkins. With people staying at home and spending more time with family, they’re more focused on time-honored traditions, like carving jack-o’-lanterns at Halloween time, he believes.

“The demand to ship them out and get them to the public has just been tremendous,” he says. “It’s been twice as much as usual.”

Assiter Punkin Ranch, like most pumpkin patch destinations, is still open for visitors this year, despite the pandemic. It’s the perfect way to spend time outdoors and social distance, Assiter says. And he’s glad people are still coming out because seeing the smiles on kids’ faces is the best part of pumpkin farming.

“The smiles those pumpkins bring, it’s a very important part,” he says.

Here are some of the best pumpkin patches in the Lone Star State, some that grow their own pumpkins on-site and others that have them shipped in from places like Floydada.

Assiter Punkin Ranch
Visit the ranch to see pumpkin varieties in all shapes and colors, tour the farm, and learn how the crops are grown. Enjoy other fun fall activities, like a ride on a pumpkin-shaped train and visit to the petting zoo.

Barton Hill Farms
Located just outside of Austin, you can pick your favorite jack-o’-lantern from a giant pumpkin patch, get lost in a 3.5-mile corn maze, and relax in a semi-private cabana available for rent. The Fall Festival and Pumpkin Patch runs every weekend through Nov. 15 and includes barbecue and live music daily.

Sweet Berry Farm
Located on 60 acres near Marble Falls, Sweet Berry Farm offers thousands of pumpkins as far as the eye can see, a giant Texas-shaped corn maze, and miles and miles of wildflowers. The Harvest of Fall Fun runs until Nov. 8, when you can hop on a hayride or even stuff your own scarecrow.

Autumn at the Arboretum
Looking for a fall wonderland with everything crafted out of pumpkins? This festival features four, 20-foot-tall decorated pumpkin houses and creative displays crafted from more than 90,000 pumpkins, gourds, and squash. Get lost in a hay bale maze or visit the 3.5-acre food, herb, and vegetable garden. Enjoy live music on weekends through Nov. 1.

Dewberry Farm
Located just outside Houston, Dewberry Farm features more than 50 attractions, including 8 acres of cornfield maze, heaps of pumpkins, and adorable farm animals. Ride a carousel, swoosh down slides, shoot paintball guns, and indulge in barbecue, pizzas, and other treats. Open Fridays, Saturdays and Sundays in October and select weekends in November.