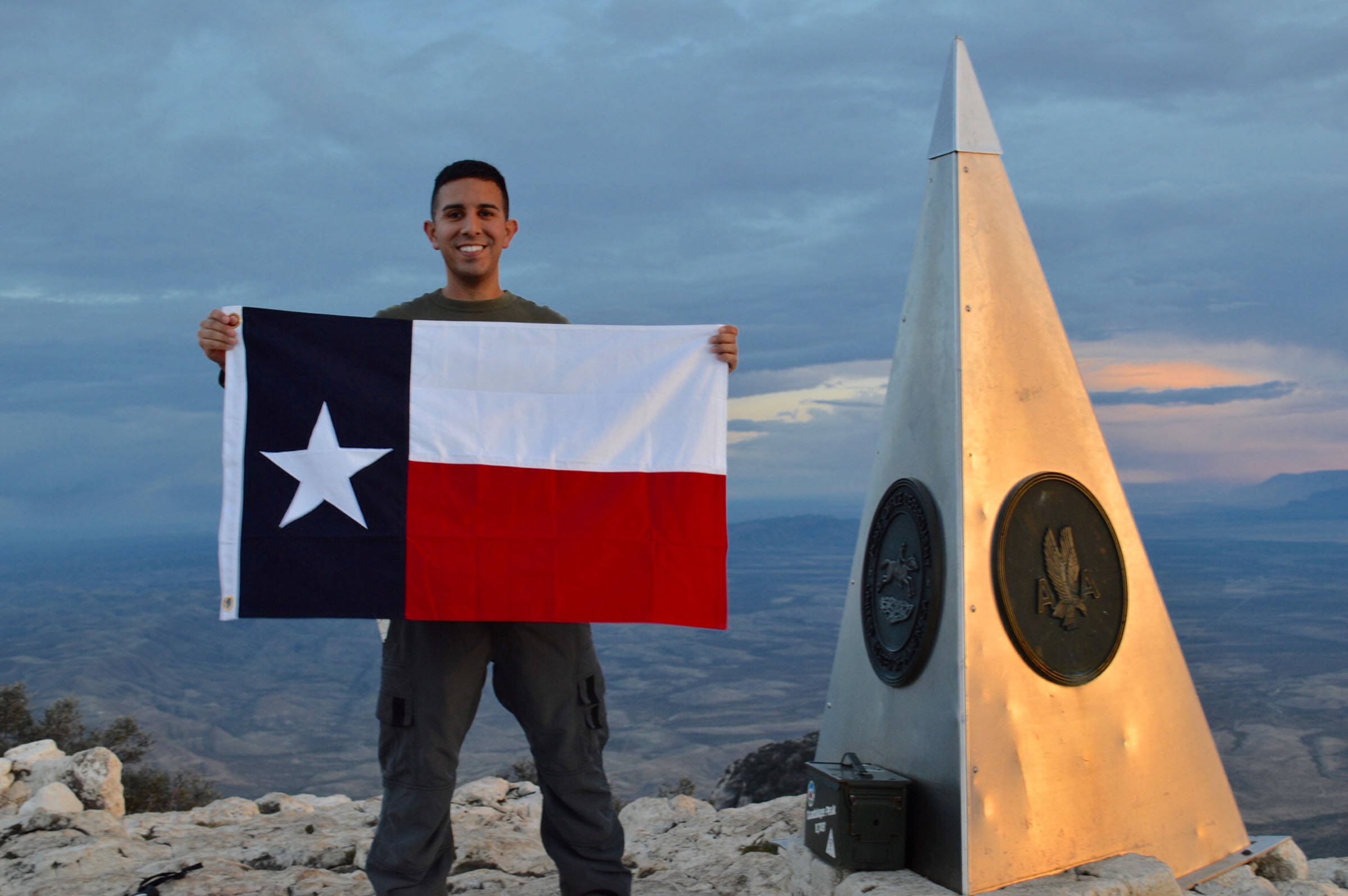 The top of Guadalupe Peak. Photo and story submitted by Ricky de Leon.

I was born and raised in Texas, and my favorite trip in the state was to Guadalupe Mountains National Park in November 2016. Although I prefer Big Bend National Park, I wanted to try something different. At the time, I was stationed at Dyess Air Force Base, near Abilene. I wasn’t so happy to be stationed in my home state, but I made the most of it. I convinced one of my buddies from California to go with me on this spontaneous trip. We left after our shift let out early one Friday.

When we first became friends, my buddy was your typical Texas trash-talker. But after we had gone to Big Bend, Fort Davis, Garner State Park, and other places, he began to really like Texas. When we arrived at the Guadalupes after the four-hour drive from Abilene, we had only about three hours of daylight left. We had the crazy idea to try and summit Guadalupe Peak with just those few hours. We wanted to catch the sunset from the peak.

We began to sprint up the mountain from the Pine Springs Campground. Some inclement weather started to occur about halfway up the peak. We ended up getting caught in a hailstorm and had to take shelter under a patch of pine trees, where we covered our heads with our backpacks. The storm didn’t last but a few minutes. It ended up being a good thing because after it had passed, it made the sky extremely clear and beautiful.

After a little less than two hours, we finally reached the peak. We were able to witness a gorgeous sunset and views stretching as far as the eye could see. We snapped a few photos, and of course signed our names in the visitor log on the summit. It had grown almost completely dark.

We started to head down the mountain using our flashlights. After being on the trail for only a few minutes, the full moon began to rise. It then became so bright outside from the moon’s glow that we dumped the flashlights and decided to let the moon light the way. We were surprised by how much light the full moon put out. We were easily able to still navigate the trails all the way to the campground. That is an experience I will never forget.

The next morning, we got up early and ate a couple of MREs (meals ready to eat). We decided to be the first ones on the trail. We wanted to see the fall colors in McKittrick Canyon before heading back to Abilene.

A few years have passed and although my friend is now in Japan and I am in Italy, we still talk about our adventures. Living in Italy I get to see all the beauty Europe has to offer, from the Alps to the beautiful Mediterranean beaches. But not even the Swiss Alps, at least for me, can compare to being somewhere like the South Rim at Big Bend. It is almost like you are all alone on another planet. It’s a feeling I can’t seem to get anywhere else. If you’ve been, you know.

In my mind, I am always in Texas and always look forward to coming home.

“My Favorite Texas Trip” is a series highlighting memorable travel experiences from Texas Highways’ writers and readers. Read more:
Two Couples Blaze Through Big Bend Country
Growing a Beard for St. Patrick’s Day in Shamrock
Readers’ Favorite: The Eagles and East Texas
The Time I Got Pulled Over at Gunpoint on I-10 Outside of Sealy