My Favorite Texas Trip: A Very Texan Proposal on the State’s Highest Peak 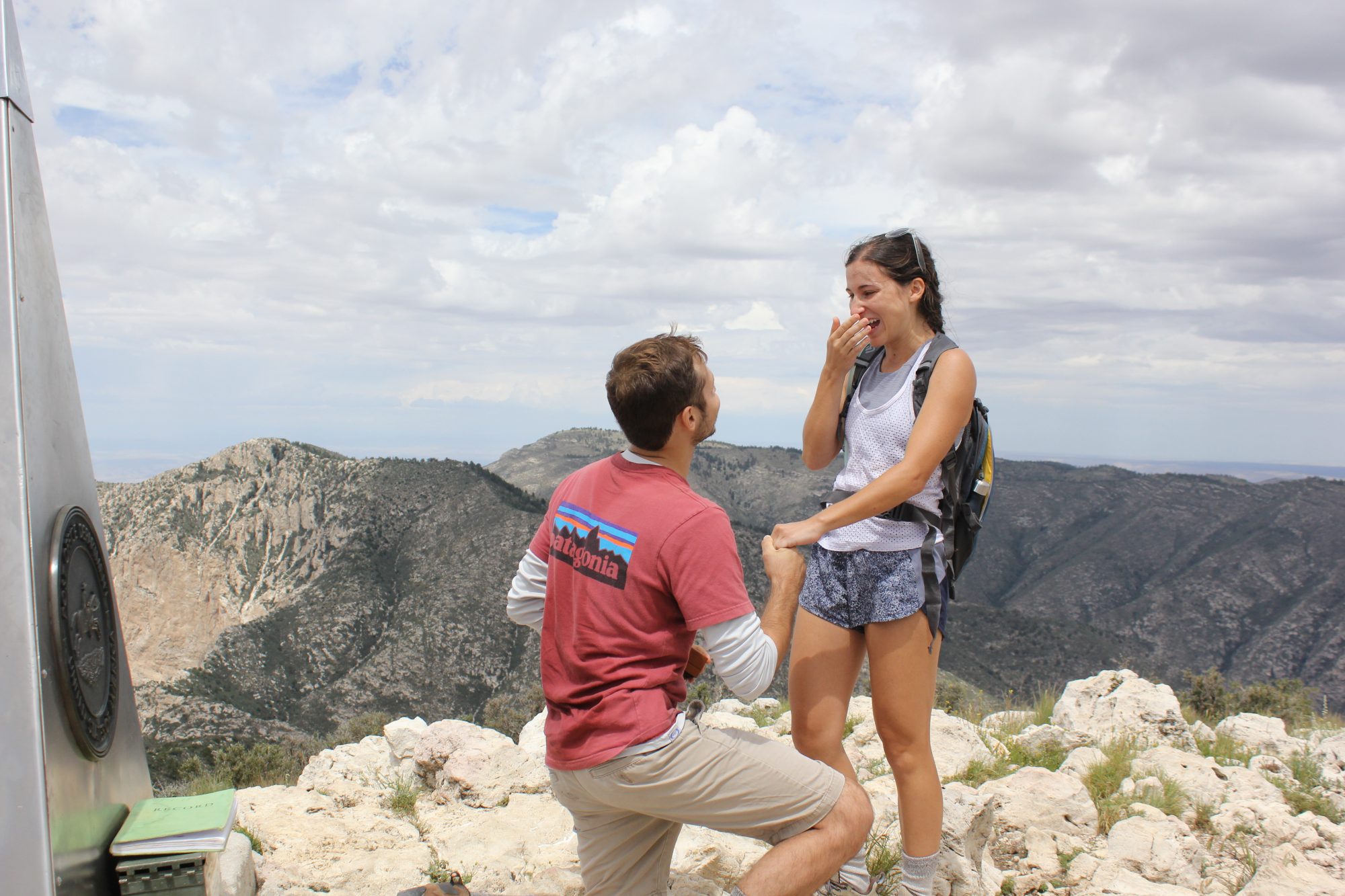 My friends and I have an annual tradition of visiting a national park each year over Labor Day weekend. And in 2018, we chose Guadalupe Mountains National Park as our primary destination with plans to also visit the nearby Carlsbad Caverns National Park.

Adding to our anticipation was a surprise: Justin, the boyfriend of my best friend, Lexi, planned to propose to her at the top of Guadalupe Peak. This was the perfect set-up as she would be surrounded by all her friends for the special moment.

There was one little issue. Despite my love of hiking, I was out of shape. The year prior, my friends and I attempted to hike the South Rim Trail at Big Bend National Park. We were approximately 5 hours into the trip when I turned to one friend and said, “I’m either going to throw up or pass out.” I ended up turning back and not accomplishing the one trail I had advocated heavily for the group to complete.

This trip also came with the added stress of being in a new relationship. My boyfriend at the time, Max, and I had only been dating for a few months. The trip would be his introduction to my group of friends. Max and I were both concerned about the first mile and a half of the hike. This is the steepest part of the trail, which climbs  3,000 feet overall. 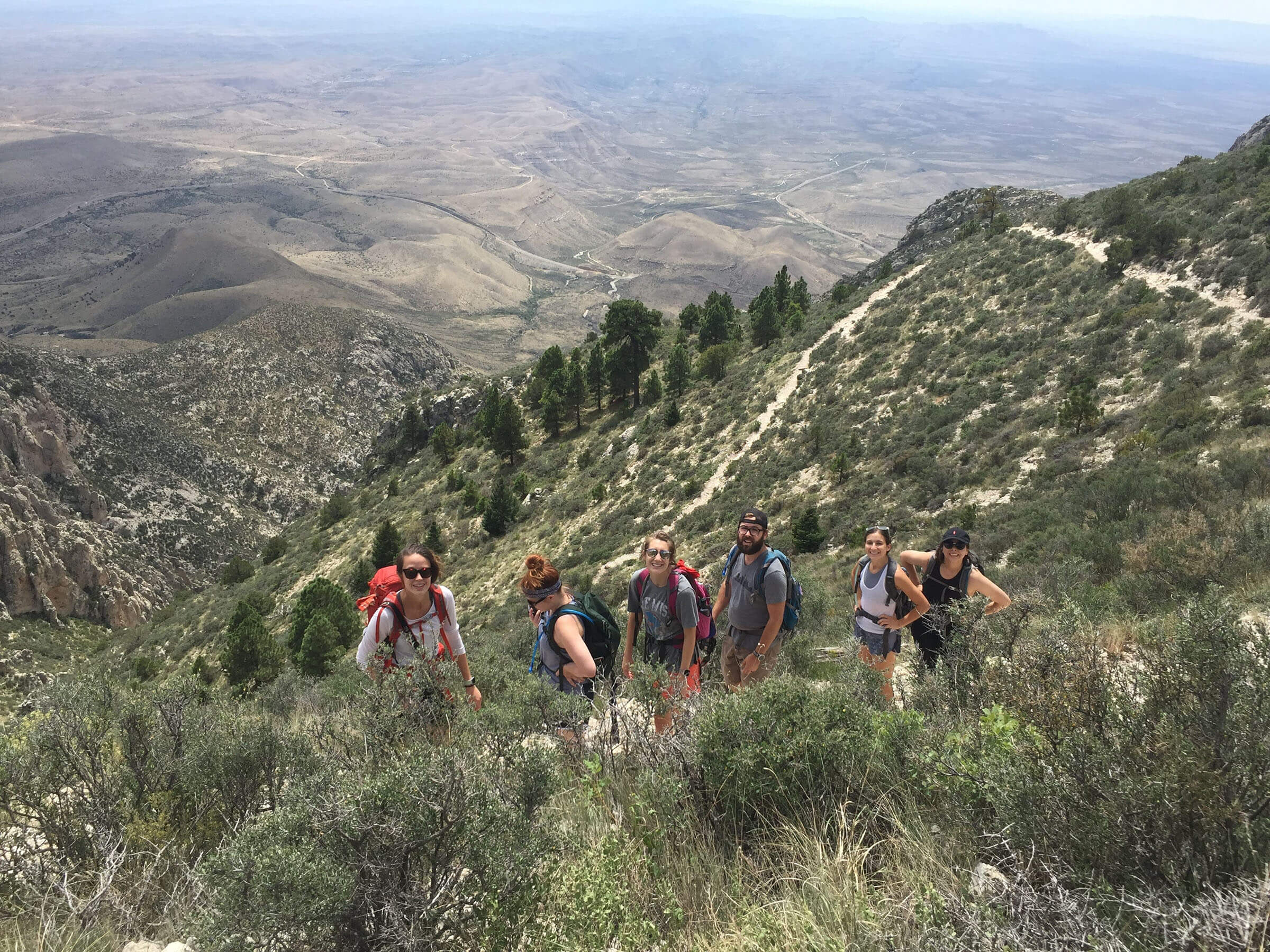 Some of the group resting with staffer Natalie Moore during some switchbacks on the strenuous Guadalupe Peak Trail.

Max and I decided to train. I opted for Soulcycle classes to whip myself into shape. One evening class kicked my butt so hard that I had to take a scooter back to my car in a downtown parking garage. Max went on runs around his Austin neighborhood. Needless to say, we were scared. “Well, if you can’t make it to the peak, you could get the campsite ready with decorations to celebrate,” said my friend Mallory. I was determined to not let this happen though. I wouldn’t be “that girl” two years in a row.

We set out on the hike just after 8 a.m. hoping to reach the peak around lunchtime. Someone asked me if I wanted to carry the champagne to celebrate up the mountain. I looked at them like they were crazy. After my South Rim trip, I had learned my lesson. I requested to lead the pack and set the pace for the hike. That didn’t last long as some of the men in our group decided to journey ahead, including my boyfriend. At one point, my roommate turned to me and said, “Doesn’t it bother you that he isn’t sticking with you?”

“Absolutely not,” I replied as I tried to catch my breath. “This is so embarrassing. I don’t want him to see me like this.” I turned to Lexi only moments later and said, “I’m not sure I can do this.” But I couldn’t bear the thought of bailing and waiting for hours for the group to return to our campsite. What would I do alone for all that time?

Somehow, I survived that first mile and a half. The trail began to level out, and we stopped for a snack in the shade of some trees.

I thought my troubles were over, but the reality of the hike was just beginning to set in. The hike to Guadalupe Peak is 8 1/2 miles long round trip, and you hit another round of switchbacks towards the end. It was around noon, and the sun was at its peak for the day. We were about to be completely exposed to the 90-degree heat. I kept looking up and seeing the end within view. However, I soon realized it was a false peak.

“How much further is it?” I asked some random hikers descending as we rounded a switchback. “You’re close,” they said. “You’ve got maybe another 2 miles.” There is a really wonderful TikTok video that really sums up my stages during this hike. I encountered exhaustion, nausea, and just wanting to give up all in those final moments. 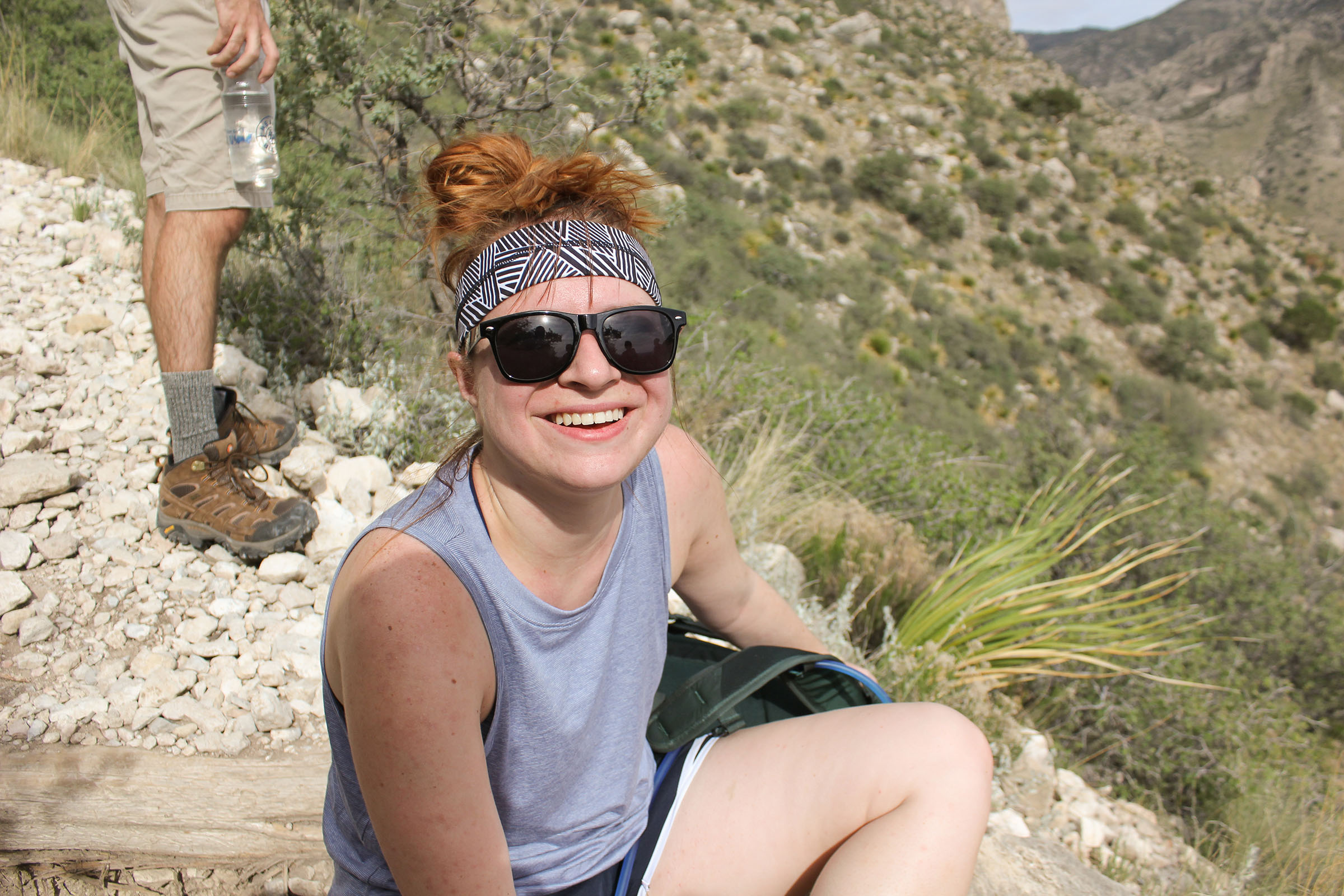 Texas Highways staffer Natalie Moore resting after the first mile and half of the hike. Photo by Jacob Lehenbauer 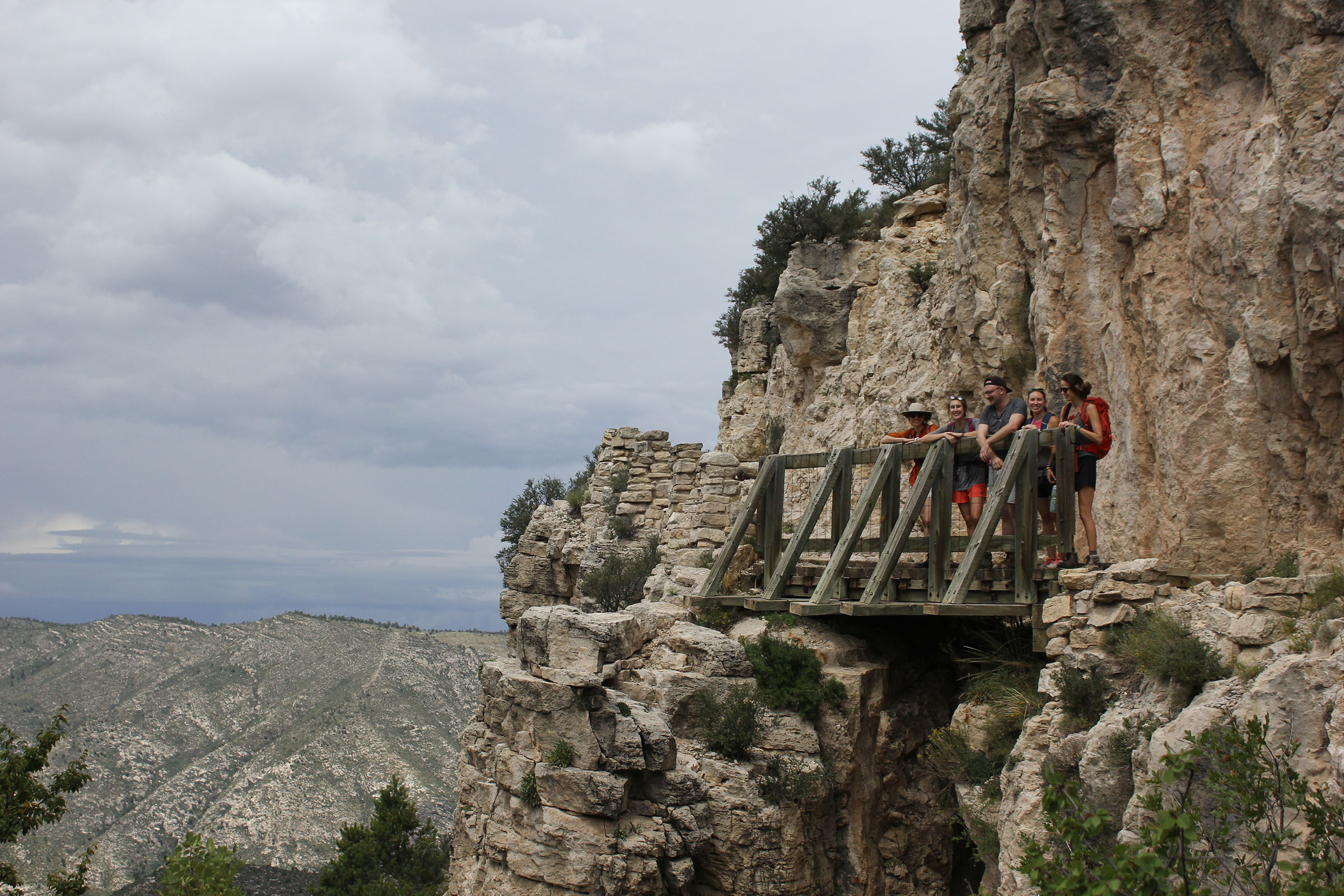 Some of the group crossing the wooden bridge before making the final ascent. Photo by Jacob Lehenbauer

Lexi and Justin began to lag behind with me. I was thankful that the soon-to-be engaged couple were heading up the caboose so I wouldn’t miss the big moment. A cheer erupted when I made it to the top. I had done it. I had not turned back and would witness the big moment.

There was one thing that Justin didn’t plan for. All of the girls had asked repeatedly what he wanted us to do once we got to the top. Do we just stand there? Admire the view? Should we give the couple space for a private moment? “I am just gonna point out the sites and then get down on one knee,” he had said.

Awkwardness ensued as we all formed a semi-circle around them at the summit. Lexi immediately noticed the formation and us scrambling for phones in our pockets. “Why are you guys just standing there?” she asked. Justin grabbed her hand and got down on one knee before anyone could answer.

He didn’t get many words out before Lexi said, “You surprised me!” She didn’t have to give a yes. We all knew her answer. He slipped a ring with a ruby from her grandmother’s collection on her finger. We all cheered and pulled out the hidden champagne bottles to celebrate. From there, we devoured our lunch and took hundreds of pictures to commemorate the moment. We made sure to sign the book at the top and note what had happened that day. A park ranger would later tell Lexi and Justin that they could return and request the book if they remembered the date. 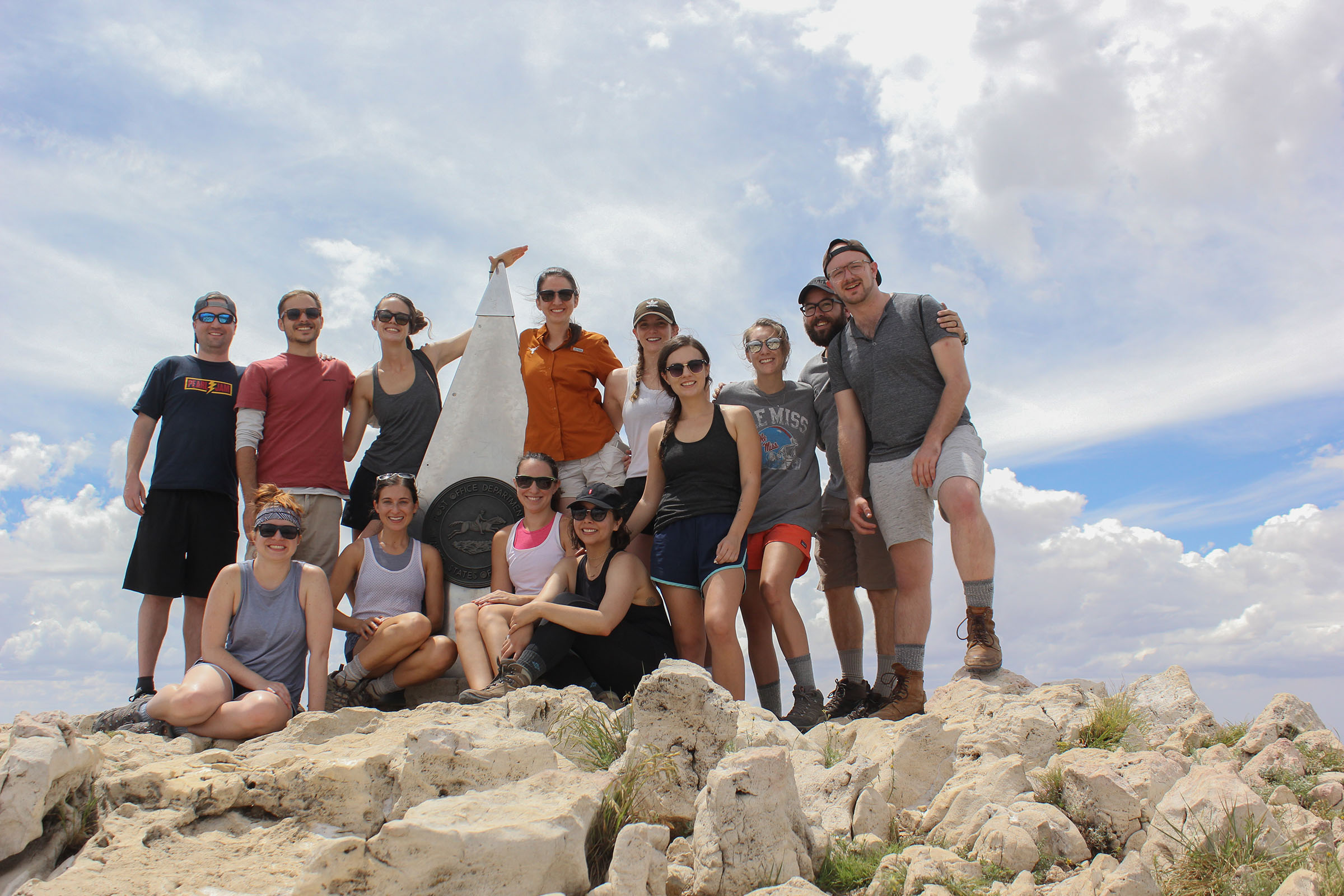 The entire group by the steel pyramid marker at Guadalupe Peak's summit. Photo by Jacob Lehenbauer 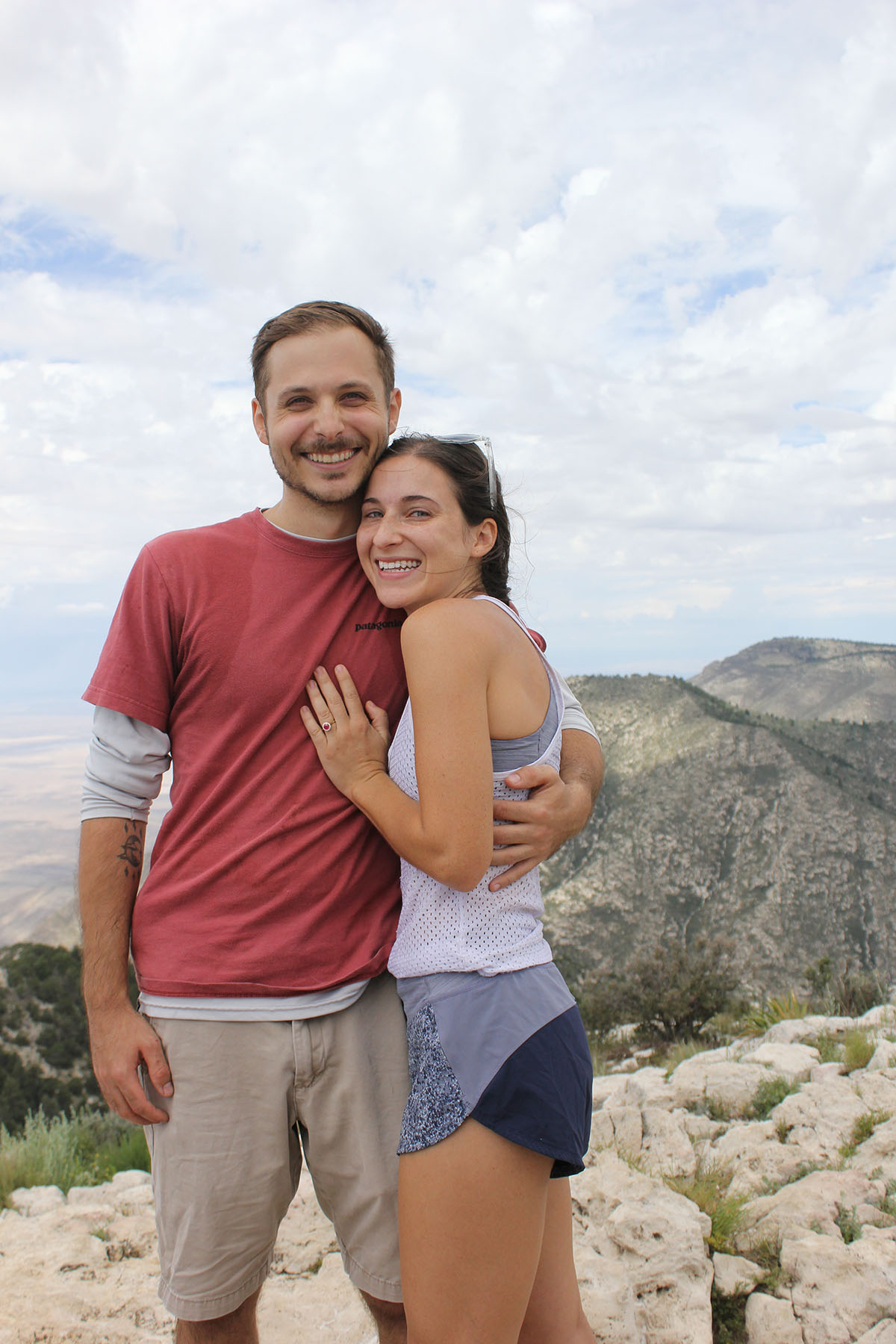 The newly engaged couple right after the proposal. Photo by Jacob Lehebauer

The hike down was easier and less eventful. We checked in our college football team scores and chatted about life. Max twisted his ankle, and so we lagged behind the group on the way down. Storm clouds were beginning to form overhead though, and so we aimed to beat the storm if possible.

When we got back to camp, Lexi’s childhood friend, Allie, took her on a bathroom trip so we could decorate the campsite. We ate dinner and visited about our adventure. Reminiscing on all our memories throughout the hike and how excited we were to have a wedding coming down the pipeline. That storm mysteriously never came. It was the perfect day and nobody could rain on our parade. In fact, none of our future Labor Day camping trips will ever compare to that very Texan proposal.