Whether enjoyed at a cookoff, in a modern dish, or even infused in vodka, the legume brings you luck no matter how you get 'em 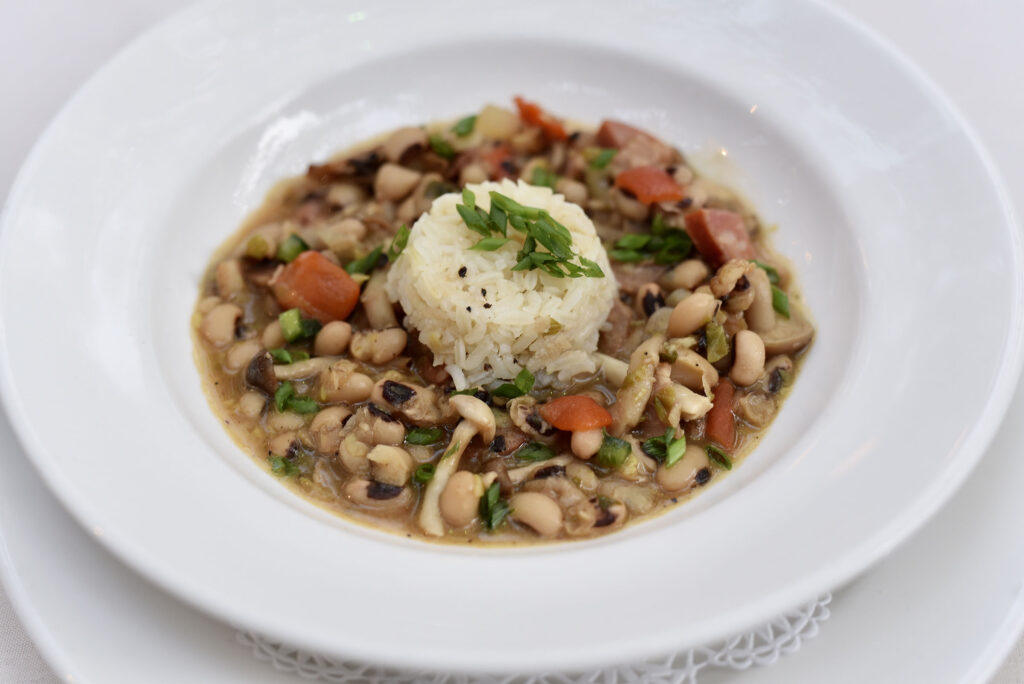 It’s a bit odd that we Texans pay such great respect to black-eyed peas, a crop usually associated with summer, on the first day of the new year.

The late food historian John Egerton traces the tradition back to the black-eyed pea’s African roots in his award-winning book Southern Food: At Home, on the Road, in History. Technically a legume—and alternatively called crowder peas, field peas, or cowpeas—black-eyed peas originated in Africa and became a staple in the soul food repertoire long before there was a genre known as such. Eating the peas is said to bring abundance in the coming year, and to represent financial abundance, some cook the peas with collard greens to represent coins and cash, respectively.

Most black-eyed peas we cook for New Year’s Day are dried or canned, but those picked in summer and frozen are even better. Like most cooks in the South, Fort Worth’s Derrick Walker grew up on black-eyed peas, a family favorite. The owner and pitmaster at Smoke-A-Holics BBQ, Walker created a version of the dish that incorporates fresh peas and hints at his culinary school training that’s drawn the attention of food critics and best barbecue lists.

“I use thick slab bacon that I cook until crispy,” he says. “To the rendered bacon fat, I add diced sweet onion, bell pepper, diced fresh jalapeño, and minced garlic, and sauté until translucent. Then simmer with a good meat stock and spices. Next, add fresh peas and cook until tender, so the stock has a gravy-like consistency. I like to serve these with Southern fried chicken, braised oxtail, or neck bones.”

Lest you think black-eyed peas are relegated to downhome cooking, chefs at higher-end restaurants also appreciate their value in dishes. Marcus Paslay at Provender Hall in the Fort Worth Stockyards highlights black-eyed peas in his deeply Southern dish of Hoppin’ John (a popular rice-and-peas dish) and grilled trout. And at Brennan’s of Houston, chef Jose Arevalo puts a Creole spin on his Hoppin’ John for New Year’s celebrations.

Even distillers are getting in the spirit. BlackEyed Distilling, based in Fort Worth, likes the pea enough to create its BLK EYE Vodka from Texas-grown crops, starting with those on a farm near Muleshoe.

To watch chefs compete to serve the tastiest black-eyed pea dish, this Saturday offers a couple of cookoffs to start off the new year. Hill Country winery William Chris Vineyards (near Fredericksburg in Hye) hosts its annual Black-Eyed Pea Cookoff, awarding $500 and two cases of wine to the creator of the best black-eyed pea dish. A $50 ticket gets you a barrel tasting, fancy meal, special T-shirt, tasting of the entry dishes, and live music.

Meanwhile, cooks in the Trans-Pecos region show off their black-eyed pea creations at the annual Pea Off, a favorite among Terlingua Ghost Town gatherings. After taking a COVID-induced hiatus last year, the black-eyed pea cookoff is happening Saturday for the 31st time. Folks bring their creations to be judged by a team of brave souls (some are extremely spicy.) The crowd can join the fun for $10, and proceeds go toward a continuing education scholarship for seniors in Terlingua. Guests receive a bowl, spoon, cornbread, and taste of the lucky New Year’s Day peas. Most of the crowd are locals, though travelers vacationing around Big Bend National Park, Alpine, Marathon, Fort Davis, and Marfa often show up, too.

And if you don’t think you like black-eyed peas, there’s hope, as Helen Corbitt proved in the 1940s. The New York native was working in Austin at the University of Texas’ tea room and teaching cooking and restaurant management. Tasked with a conference dinner starring Texas products, she agonized over how to feature black-eyed peas, an item she actually found distasteful. Experimenting with the peas as a salad, she created what later became known as Texas caviar. After that invention, she went on to work at the Houston Country Club, the Driskill Hotel in Austin, and Neiman Marcus in Dallas.

Mix all ingredients in a bowl. Store in a jar in a refrigerator, removing garlic after one day. Best if stored at least two days and up to two weeks.

Notes: If you like, use 1 pound dried black-eyed peas, rinsed and soaked in water overnight, and drained. Use less oil, if you like.

In 1957, she penned Helen Corbitt’s Cookbook, in which she writes about the landmark recipe for which she’s forever known: Pickled Black-Eyed Peas. The dish became so popular she almost never hosted a party without it. Enjoy yours as a salad, eaten simply with a fork, or as a dip for tortilla chips, adding chili powder or jalapeño, if you like.