While the creator behind this attraction is known, the explanation for their new location is a mystery 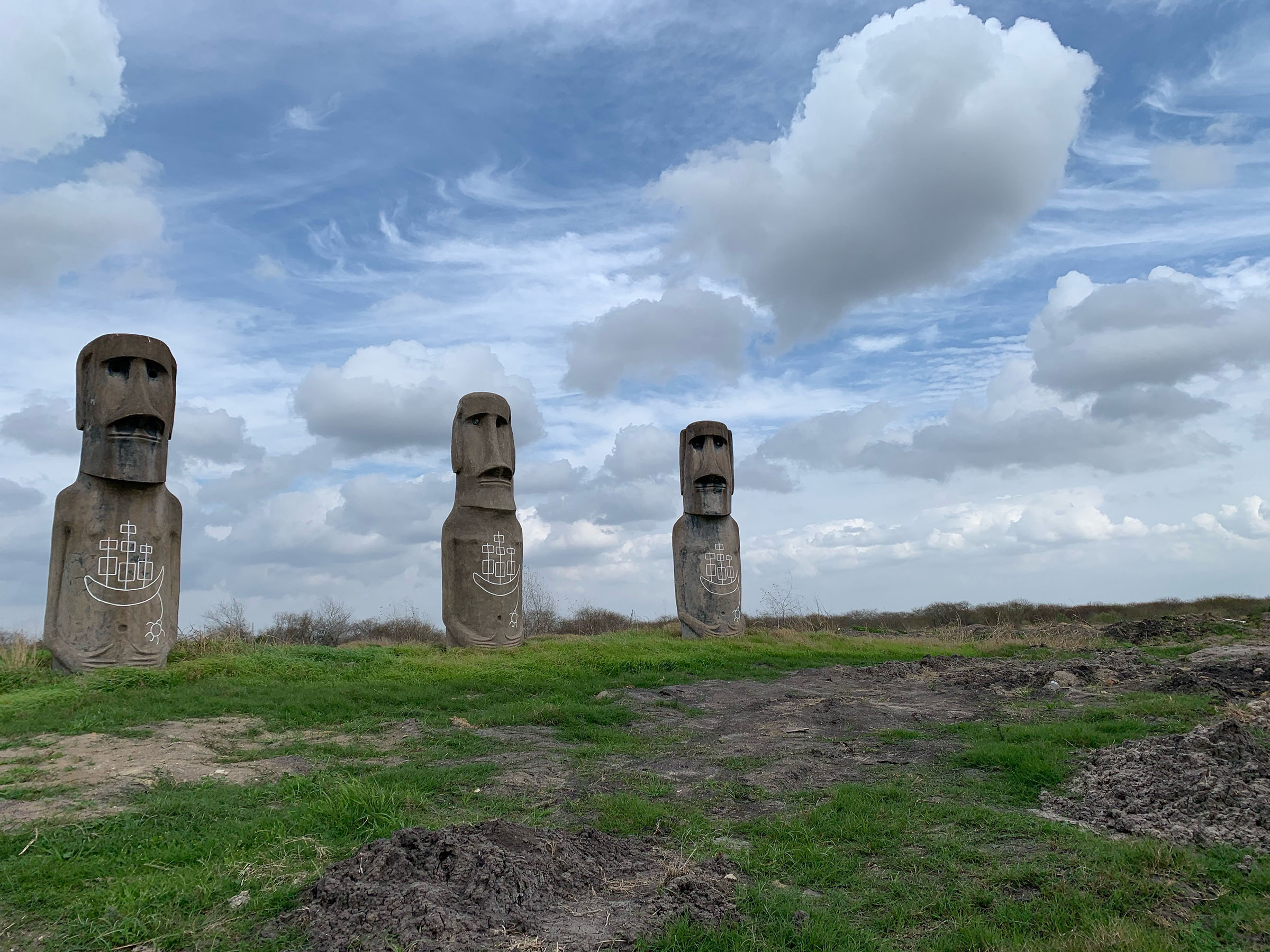 Befitting the enigmatic nature of their inspirations, the five Easter Island heads of Victoria are cloaked in mystery. One is in a park, three are situated in a pasture, and a fifth one’s whereabouts are unknown.

Unlike many roadside attractions across Texas, the trio of Easter Island heads are easy to miss—even if you’re a local. Situated in a pasture on the northeast side of Victoria, the mo’ai, to give them their proper designation in the Polynesian language of the Rapa Nui people, are easily visible only to northbound travelers on the service road of Victoria’s Loop 463/Zac Lentz Parkway. (If you are in the main lanes of that road, you might well blaze right on past.)

Because they hulk on the property just south of Jung Granite and Tile, I rang that business seeking an explanation.

“I have no idea why they are there,” said the woman who answered the phone. “We came to work one day and they were just there.” (So much for that line of investigation.)

While I’d heard of the slightly older Easter Island heads at Stonehenge II in Ingram, and, for that matter, David Adickes’ giant presidents heads in Houston, I’d never heard the word boo about these equally impressive South Texas creations until earlier this year.

It seems like what happens in Victoria stays in Victoria. Perhaps part of that lies in the peculiarities of Victoria’s location. Despite the city being a midway point between Houston and Corpus Christi, relatively few travelers venture into it thanks to a swift and direct US 59/Interstate 69 bypass. And, because it’s not on the way to Port Aransas (or any other easily accessible beach) for San Antonio and Austin residents, it doesn’t get much pass-through traffic from those cities either. And so, despite being a thriving, steadily growing city of 67,000 people within a two-hour drive of four of the 10 largest Texas cities, few outsiders know much of what it has to offer—including these extremely random Easter Island heads.

As with the originals, we know who built them. But finding out why the Victoria mo’ai stand where they are now within Victoria is a thornier question.

First, the who part. They are the work of Alvin T. Dincans Jr. After working for Alcoa and stints as a plumber and construction worker, Dincans owned and operated a boat storage yard. It was there, beginning in 1996, that he was struck with an inexplicable yearning: Without ever so much as setting foot on Easter Island, the then 60-year-old Dincans felt called upon to build five mo’ai—each weighing 7 tons and standing 13 feet tall—behind his boat sheds. He checked out every book the Victoria library had on the subject and set into the project, having never sculpted anything out of concrete any more complicated than a home foundation.

He felt that was enough. “Concrete I know pretty good,” he told the Victoria Advocate in 1997. By that time, he was done with all but the finishing touches on his “concreations.”

“It was by trial and error,” he said at the time. “I guess you generate creativity by experience. I’m more creative than I thought I was.”

Dincans told the reporter he planned to install one at his bay house and the others at other properties he owned. However, according to a Victoria Parks and Recreation Department official with secondhand information, Dincans was persuaded in 1998 to share his works with the world at Victoria’s Riverside Park, the city’s civic pride and joy on the banks of the Guadalupe.

And that’s where things stood until quite recently, when a trio of mo’ai went on the move, according to a Reddit post from a few months ago:

“These Easter island looking statues just showed up in my relatively small town in South Texas. I’ve tried looking and there’s no explanation as to why that I know of.”

Another local chimed in with some, but not all, of the answers:

“Funny I saw Easter Island and South Texas and I knew it was from Victoria, Texas! Hate to kill the mystery, but those heads have been around forever. My mom calls them taboos because of a Brady Bunch episode so that’s how far it’s dated lol.

I’m pretty sure they’re just ornaments owned by the city, they have been located for years around Riverside Park, and I believe there is still one over there by the forked road.

They just recently moved them, we were just talking about these last week and my mom said she saw them moving them from the park so hate to break the [mystique] but it seems they just moved them to another location.”

But why? Modern-day engineers and archaeologists still wonder how the original mo’ai were moved from their quarries to where they stand today, as even the smallest one weighed 14 tons, or twice as much as a Dincans model. Given that we have technology the Easter Islanders lacked—wheels, engines, pulleys, internal combustion engines, trucks, etc.—the how is not in question at all here. It is the why that has proven so elusive.

I spent an afternoon on the phone with people from Victoria’s parks department, and while they had some information, nobody could tell me why these mo’ai were where they are now. I also tried to reach Dincans himself. I left a message on a couple of Dincans family members’ cell phones to no avail. The boatyard where Dincans made the mo’ai is permanently closed, and his own number was disconnected.

I did find a listing for Dincans on Findagrave.com, but no obituary. Dincans is a planner whose tombstone and burial plot await only the chiseling of his death date for completion. He’s even picked out his epitaph: “I worked and I worked. Now with God’s will, I will rest.”

Maybe that epitaph was telling me something: that I should not obsess on why those mo’ai are where they are and just be happy they exist at all.

If you, too, want to ponder these beauties, you can find them on Loop 463/Zac Lentz Parkway north of US 59 Business and south of Salem Road. Remember, you want to be on the service road—take it all the way north from 59 and the heads will be hard to miss as you approach Salem Road. If you pass Jung Tile and Granite and Renken’s Nursery, you have gone too far.

Do you have a roadside oddity you’d like to know more about? Fill out the form, and we’ll investigate it.