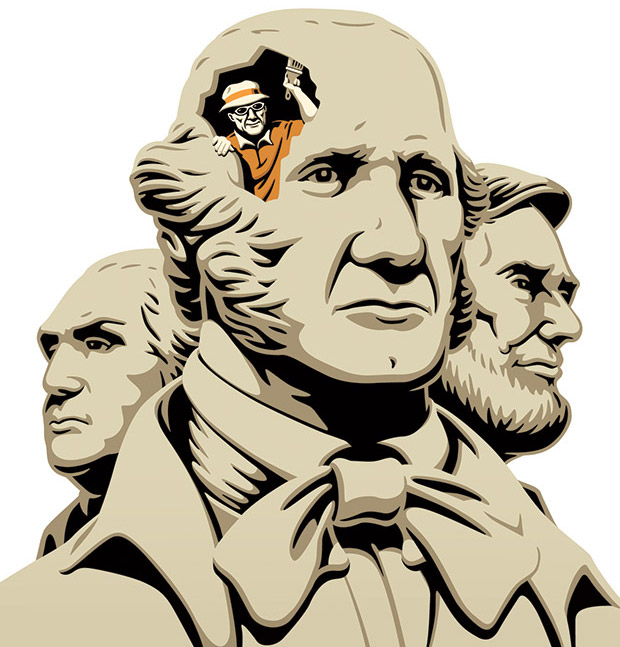 Houston-based artist David Adickes estimates he’s created about 5,000 paintings, drawings, and three-dimensional artworks over the course of his 70-year career. But he is best known for the largest of those creations, which cover two disparate themes—monumental concrete statues of heroic figures and monumental concrete statues of whimsical phrases.

David Adickes’ artwork is on display around Texas, including the 76-foot-tall Sam Houston statue on Interstate 45 in Huntsville, and at the Adickes Foundation in Huntsville. The foundation, which displays Adickes’ work and other artwork he’s collected, opens by appointment
for tours. Call 936/662-3177.

Adickes’ first large-scale sculpture was Virtuoso, a 36-foot-tall cellist designed in Cubist style, which has adorned the front of Houston’s downtown Lyric Centre since 1983. In the subsequent decades, he produced many more. Today, his 76-foot-tall Sam Houston looms large along Interstate 45 in Huntsville, and his colossal Stephen F. Austin, about the same height, stands sentry over Texas 288 in Angleton.

In Houston, drivers on Interstate 10 in the Heights frequently pull off the road at the Patterson Street exit to take pictures in front of his three-story sculpture proclaiming “We Love Houston;” and his 35-foot sculpture of vertically stacked letters spelling ART welcomes visitors at the entrance of the Silos at Sawyer Yards, an art space just west
of downtown.

Adickes earned degrees from Sam Houston State University and the Kansas City Art Institute before enlisting in the military during World War II. From 1948 to 1950, he studied art with Fernand Léger in Paris, afterward returning to his hometown of Huntsville and then moving
to Houston.

Adickes, who will celebrate his 90th birthday in January, shows no signs of slowing down. He still regularly works in his studio east of downtown at 2401 Nance Street (the massive presidential busts and a towering statue of Charlie Chaplin outside are a local landmark). And in 2007, he purchased the old Huntsville High School building and converted it into a personal museum of his life’s work.

Q: Why did you choose to move to Houston after studying art in Paris?

A: It was close to Huntsville and seemed like the right place to go. Why didn’t I go to New York? It was in the 1950s, right when a group of artists in New York was getting big. But if I hadn’t moved to Houston, I would not have been able to make the big statues, which are what I’m known for. Those could be made in Houston, which had land and was inexpensive; they could not have been made in New York. Houston was ultimately the right choice.

Q: What are some of your other favorite Texas towns?

A: I love Austin. A favorite place there is the Oasis restaurant, which looks out over Lake Travis. I went to see east Austin recently; there’s a lot of art going on there. And there’s Round Top, with all the antiques and music concerts. San Antonio is also a beautiful town. I love the River Walk and eating at Casa Rio, a Mexican restaurant near the Commerce Street Bridge that’s been there forever.

Q: What other restaurants do you recommend?

A: One of my favorites is Café Ginger, a Chinese restaurant on West Gray Street in Houston. I always order the same thing: spicy and tangy chicken. I also like Barnaby’s Cafe. It’s named after the owner’s dog, and there are paintings of the dog on the walls. They have several locations in Houston and the best honey-baked ham sandwich.

Q: Where do you like to go to see art?

A: I spent all day yesterday at the Menil Collection seeing primitive art, and last week I was at the Museum of Fine Arts, Houston, and saw some classic portraits. I like to visit the Kimbell Art Museum and The Modern in Fort Worth, and the Dallas Museum of Art. It’s what I do—see art. It’s a creative experience.

Q: What are you working on these days?

A: I’m making Sam Houston on horseback for a large roundabout being built in Baytown. I’m doing a big sculpture with the words “Art Is Fun” for Houston. The letters will be tilted and colorful, fun-looking. I’m 89 and still going strong. People ask me “What’s your secret?” I say only once, early in my life, have I worked at a job, because art isn’t work for me. Solving problems in art is fun for me, and all other problems are work.

Q: How do you plan to celebrate your birthday?

A: I try to do something original each year. Here’s my birthday joke for my 90th: I’d love to have big numbers—nine and zero—made 15 feet tall and hang them from the Astrodome. Then I’ll hang from the numbers and have 90 beautiful girls, each carrying a candle on their head, pass by and I’ll blow out the candles one by one. I’ll need to get the key to the Astrodome first…

Q: What do you want your legacy to be?

A: “Permanency” is a word I’m attracted to. The Sam Houston statue is going to be there for a long time. All my big sculptures are too heavy to move. People will not remember my name. Do you remember the name of the guy who made the Statue of Liberty or Mount Rushmore? My name might not be remembered, but the work will be.