With major contributions to the two most famous tornado movies of all time, Texans loom over the cinematic subgenre of “films featuring tornadoes.” First, we have Galveston native King Vidor, who survived that city’s great hurricane of 1900. Though he graciously declined credit, he directed the Kansas tornado scenes in Wizard of Oz. Fifty-seven years later, Fort Worth native Bill Paxton starred in Twister, the blockbuster that inspired a generation of storm chasers to get in their trucks with their cameras and head for the eerie green skies. Today, the internet and social media have brought this daredevil form of photography even more to the fore.

While Texas is not as strongly associated with tornadoes as Oklahoma, Kansas, and Iowa, it historically beats every state for the most tornadoes a year. The latest data shows an annual average of 155 twisters in Texas between 1991 and 2010, compared to second place Kansas’ 96. Much of north-central Texas and the Panhandle lies well within what is known as Tornado Alley, the zone of the Great Plains where cold dry air coming off the Rocky Mountains collides with the warm and moist breezes sighing northward from the Gulf. This combo creates the world’s most perfect incubator for tornadoes and supercell storms.

We’re currently in the middle of tornado season in Tornado Alley, which occurs between March and June. Then, from the beginning of June, we enter Atlantic hurricane season, lasting through the end of November. According to researchers at Colorado State University, a group that has been presenting hurricane season forecasts for four decades, the likelihood of a storm hitting Texas is 54%, up from an average of 36%. What all this means is that we’ve reached peak season for storm chasing.

As someone from the Gulf Coast, I find storm chasing to be pure madness. We learn early and hear often to “hunker down” and “run from the water, hide from the wind.” Storm chasers eschew hunkering and opt instead to drive as fast as they can right at the wind. Speaking from experiences of several hurricanes and mere tornado weather (not an actual tornado, which thankfully have remained only in my nightmares, but just those otherworldly conditions in which they spawn), I’d rather ride out five Category 5 ’canes than a single middling tornado.

Then there are folks like Bob Pack. At 61, he’s been covering weather for 40 years. Fellow photographer Adam Kyle Jackson calls Pack “a chaser purist,” meaning he makes a living chasing storms and selling stills and video footage to news stations and other media and other organizations. “If you are where there’s severe weather and you’re sitting next to Bob Pack, something good’s going to happen,” Jackson says, laughing.

Pack’s eeriest—and most rewarding—tornado experience came in Cleburne, around 2012 or ’14. “Somewhere in that range,” he says. “I saw seven tornadoes that one day and this one tornado formed a little before dark, which is when usually the low level jet kicks in, and that’s when you really get your tornadoes to form.”

Even by Pack’s standards, this was a scary night. The weather radar went down for two scans, leaving him in the dark for a crucial eight minutes, and when a power flash occurred and illuminated the night, he saw a tornado ripping its way through Cleburne mere feet away, right across the street. He could feel the barometric pressure dropping, and his truck chose that moment to start “running rough.” He survived, though, and in the aftermath happened to notice a lost child.

“I hit my lights on the truck,” he recalls. “And I saw this blond-headed girl walking down the road on the sidewalk.”

Pack grabbed a bottle of water and took it to the dazed child, who was able to tell Pack that she had ridden out the storm at a friend’s house, and now was lost. Pack asked her where her house was, and from her description, he realized with a sinking heart that her home had been in the very path of the worst of the storm.

Reassuring the child she would be OK, Pack set off to help her find her mom. Walking among downed power lines, Pack told the girl to trace his steps and duck when he said so. Far from the radius of his truck’s headlight illumination, it was just him and the girl picking their way through a ruined and dangerous landscape behind Pack’s flashlight.

“And after, I don’t know, 15 to 20 minutes, we get down and this woman comes running over and she grabs the girl, and hugs her. And it was her mother,” Pack recalls. “She latched on to me and gave me a big hug that I thought I’d never get out of and thanked me for taking care of her daughter. And that’s when I said to myself: ‘This is part of the reason I think I’m on this Earth: I take the helping people part of everything very serious.”

I am certainly not alone in marveling at the pictures these photographers share and the meteorological science they help us understand. Here, we ask Pack, a true veteran of the field, and three other practitioners of the craft—an amateur, a meteorologist just starting out, and a climate scientist entering his prime—to share with us their favorite images. 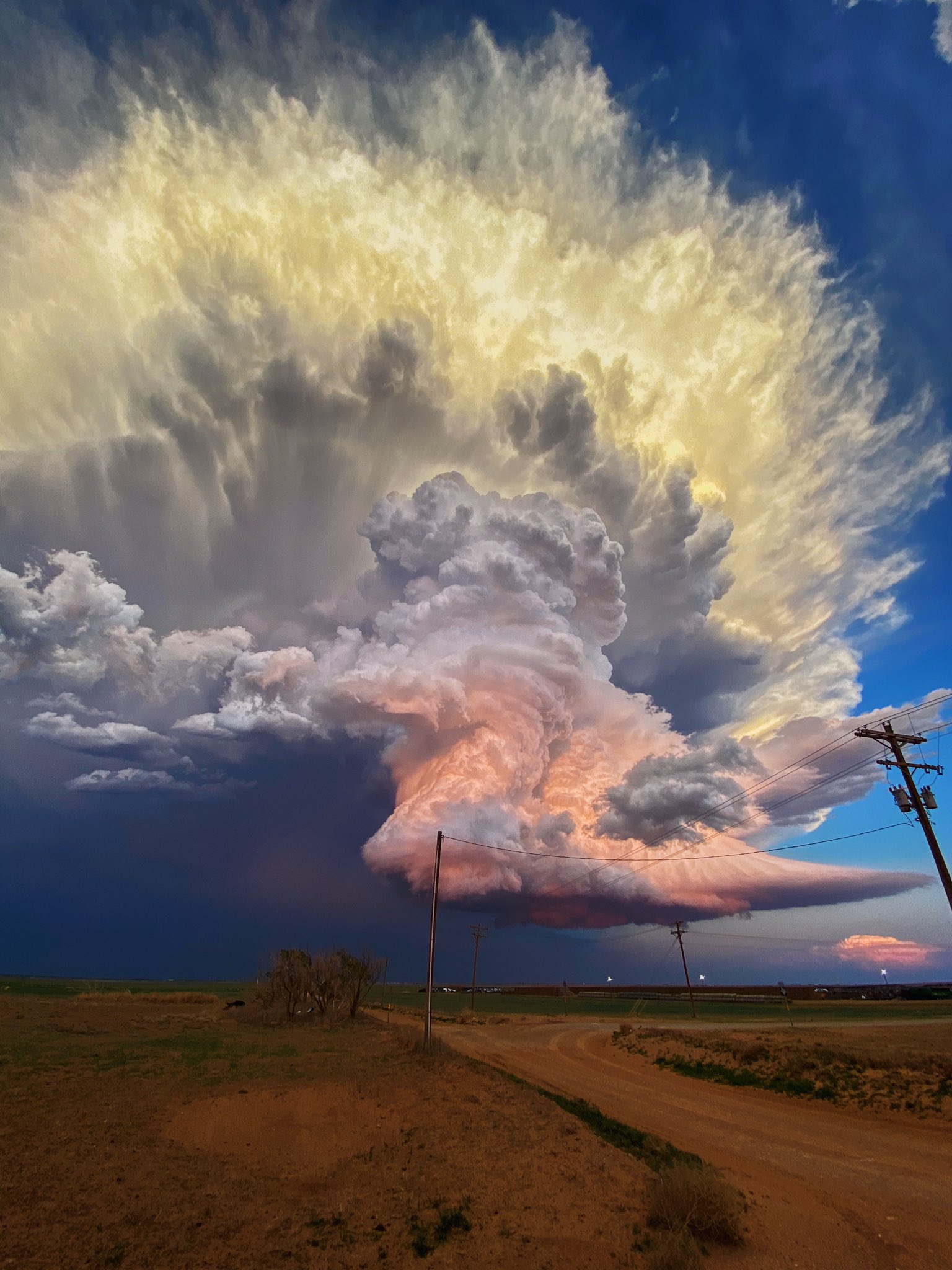 Experience: Next to none. When she went out chasing this storm last spring, it was her first storm-chasing trip. “This picture was what I like to call a ‘Godincidence,’” she says.

Photo: Taken along County Road 172 south of Earth, north of Littlefield. “The sunset was absolutely beautiful behind us, with the storm right in front of us. We just listened to some music and watched [the front] change in front of us. It was so beautiful, it’s hard to describe how gorgeous the colors were. It was constantly changing with all kinds of brilliant colors. The photo hardly does it justice.

Viral Sensation: Rowe posted the photo on Twitter, along with the the tweet “storm chasin [sic] in West Texas,” on May 17. She tagged a pro photographer named Charlie Stout who’d been covering the same storm. “It took off from there,” she says. “It had just under 100,000 likes on the night that I posted it before I went to sleep, then had 262,000 the next morning.” It finally started to level out on Twitter in late May and early June with 512,000 likes, 83,000 retweets, and over 2,000 replies. Instagram garnered her around 25,000 likes and “too many reposts to count.”

“I had no idea what to do initially or how to react,” she recalls. “Everything moved so fast! I actually ended up reaching out to Charlie Stout and he helped me with setting up a website, obtaining my copyright, and handling all of my questions … I had no idea that so many people would love the photo. I had messages from people all around the world telling me how it impacted them.” 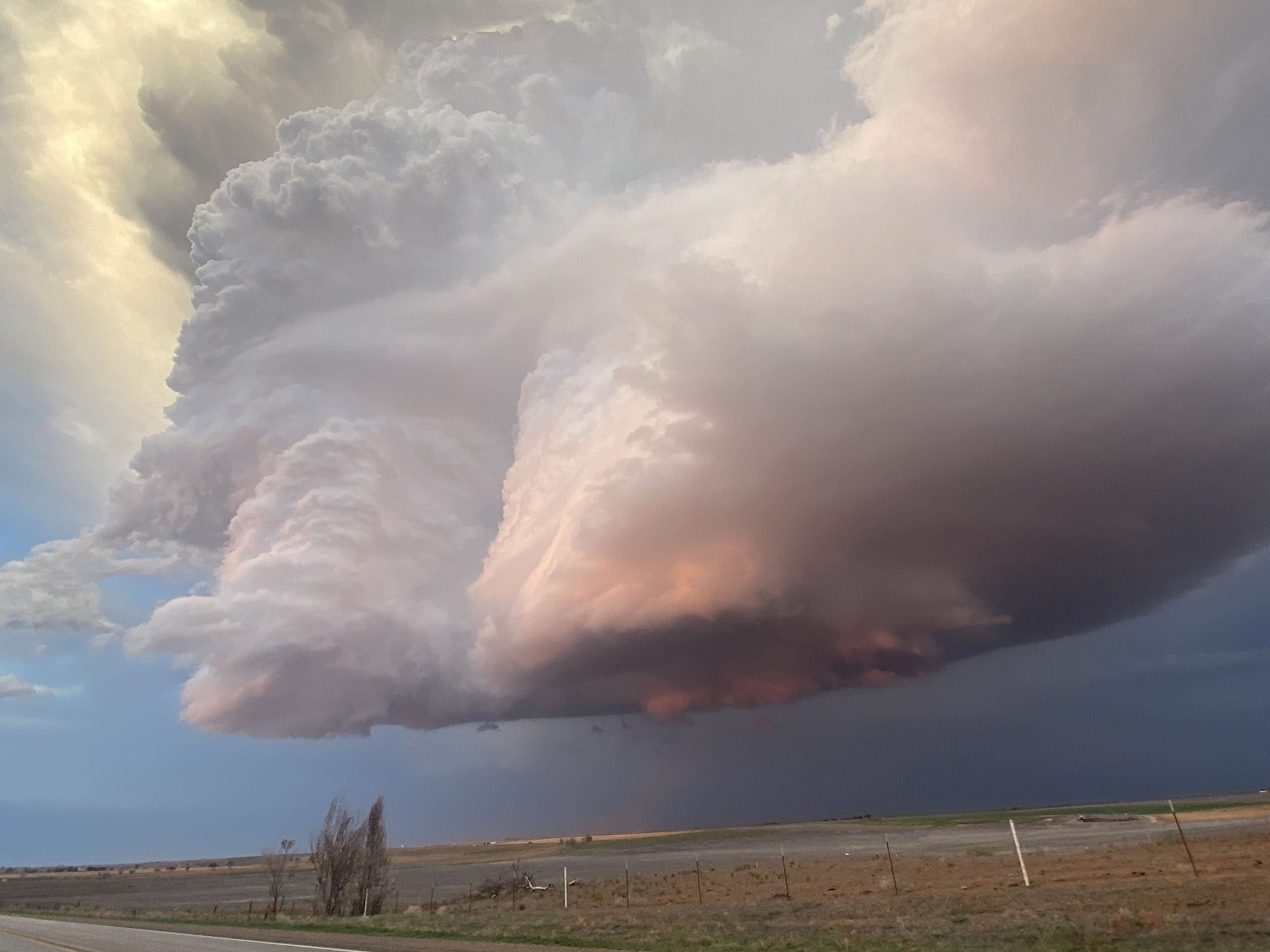 Occupation: Geologist and geosteering consultant at Terra Guidance. Schaeffer, who received his Master’s in meteorology from Mississippi State this year, also operates an independent meteorology company under his name.

Experience: Schaeffer caught the tornado bug while attending pre-K in 1992, when the Houston area suffered a rare tornado outbreak. “It was one of the first events I can remember,” he says. “And that got me interested in weather.” With that event setting the course for his life, Schaffer has been chasing storms whenever he can since the spring tornado season of 2014. He added hurricanes to his storm chasing last year.

Scariest moment: “One time I got a flat tire and my car broke down in East Texas in the path of a circulation, which luckily didn’t really touch down. But it was very scary for a few minutes because we couldn’t quite get the spare on before it hit.”

Photo: “This is an amazing structure of a storm with sunset. Left side is anticyclonic rotation and the right side is cyclonic. Very rare to see this so clearly without rain or hail obscuring. This was near Earth, Texas, on May 16, 2021.” [Editor’s Note: This photo was taken during the same storm as Laura Rowe’s, but the photographers were not on the same trip.] 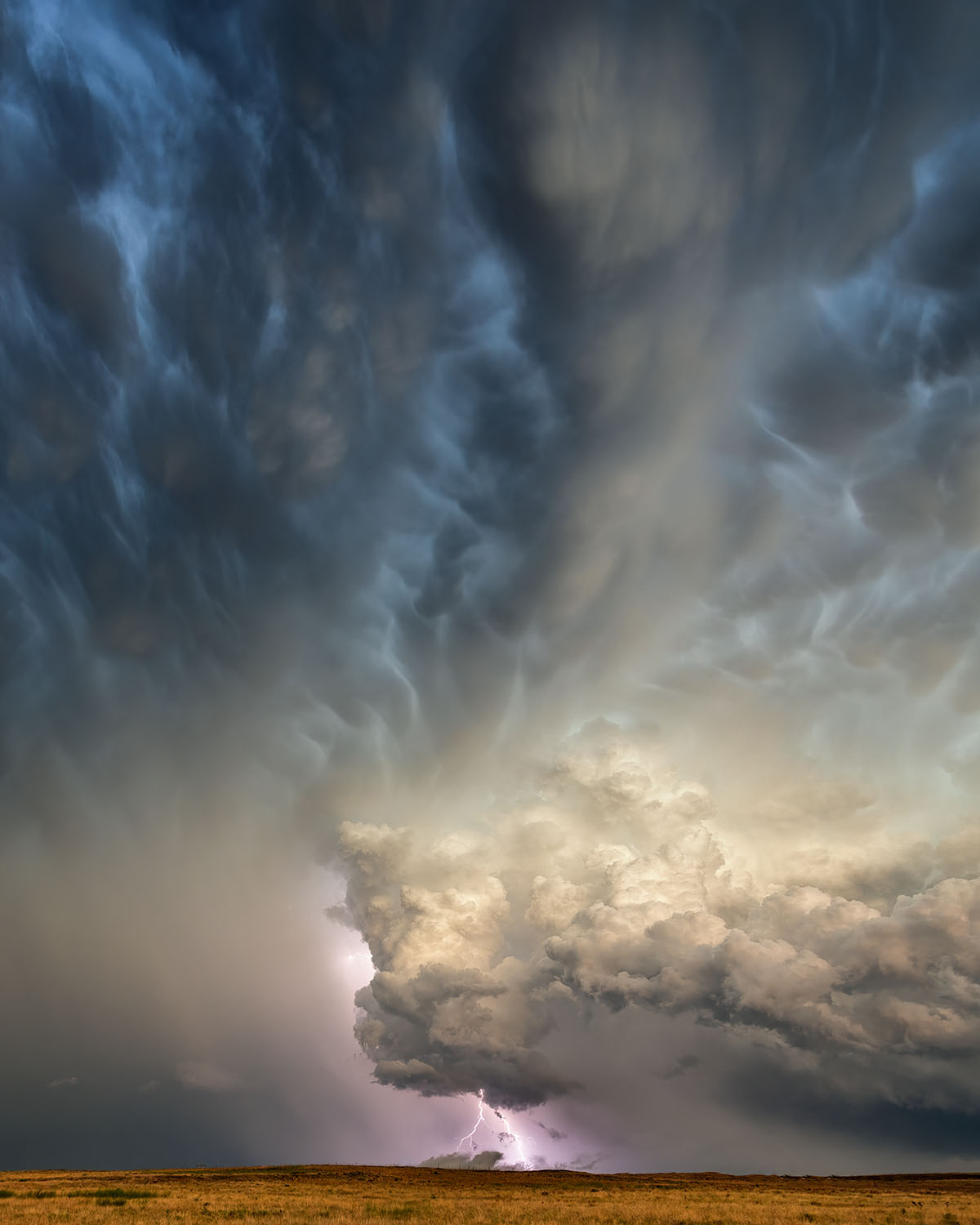 Experience: Jackson was born and raised on a South Plains farm near Levelland, the heart of Texas’s Tornado Alley. The “whole weather aspect of farming” was ingrained in him from birth. “My paw-paw had a ham radio and we’d get out and chase a storm every now and then, even a long time ago,” he says. “Jumping ahead, I founded an engineering firm in Houston that focused on atmospheric science and air quality permit compliance, which involved a lot of meteorological data analysis of air modeling. A lot of my clients were in Kansas, Nebraska, all the cool places that you want to be. At first, I chased just to chase—I never really considered, ‘Hey I should take a picture of this stuff.’”

Photo: Jackson took this photo, titled “Balancing Strike,” of an embedded mesocyclone with lightning striking just outside of Perryton in June 2020. “Possibly the greatest updraft and lightning show I’ve seen to date,” he says. He describes the moment leading up to the shot:
“The chase started earlier in the day at storm initiation near Montezuma, Kansas, where I had gotten myself into a bit of trouble surrounded on all sides with massive hail and no clear escape route. I lost visual and radar signal several times and just decided to bail to the south with no intention of continuing to chase. This is where I luckily encountered the backside of a developing system on the Oklahoma-Texas border, snapped a few quick photos near Perryton, and continued to run from this thing all the way to Wichita Falls, where it had turned into a linear monster with massive hail.” 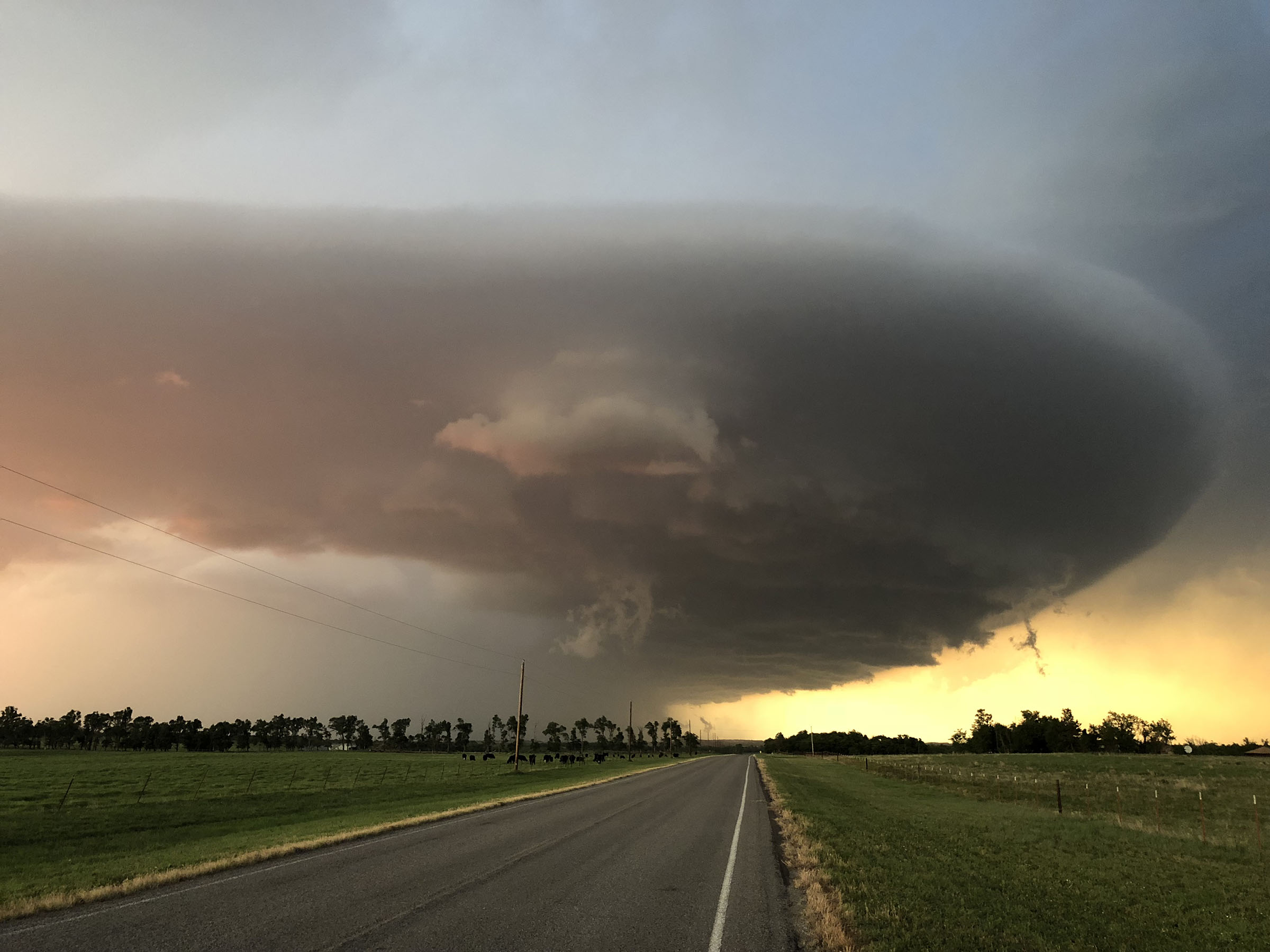 Occupation: Freelances for multiple television entities providing images, B-roll footage, live video feeds, and commentary prior to, during, and after weather events. He does not consider himself a journalist bound to a code of nonintervention, although he is sometimes referred to as such by media partners. “When people need help, I turn the camera off because ‘the shot’ is not my number one priority, helping them is,” he explains.

Experience: Pack says he’s been through 204 tornadoes—not including hurricanes and derechos. His first tornado briefly tore through part of his hometown of Somerville, picked up a barn, and deposited it several hundred yards away, right in front of his eyes. “It was just one of those brief tornadoes that suddenly drops down out of the sky for a few seconds, and sends pieces of tin and other debris flying through the air, hangs pieces of debris in the trees, and moves a barn over from one place to the other.”

Photo: When you’ve taken as many photos of storms, it can be a challenge to keep track of all of them. “Best I can deduce from old social media posts, this was [taken] way back on May 29, 2018, so it must have been near Wheeler,” Pack says about this dramatic shot of the edge of a supercell thunderstorm taken during a tornado warning.