What the Heck Is an Authentic Texas Icehouse?

From opening hours to food served, there are many ways to spot the real ones from the impostors 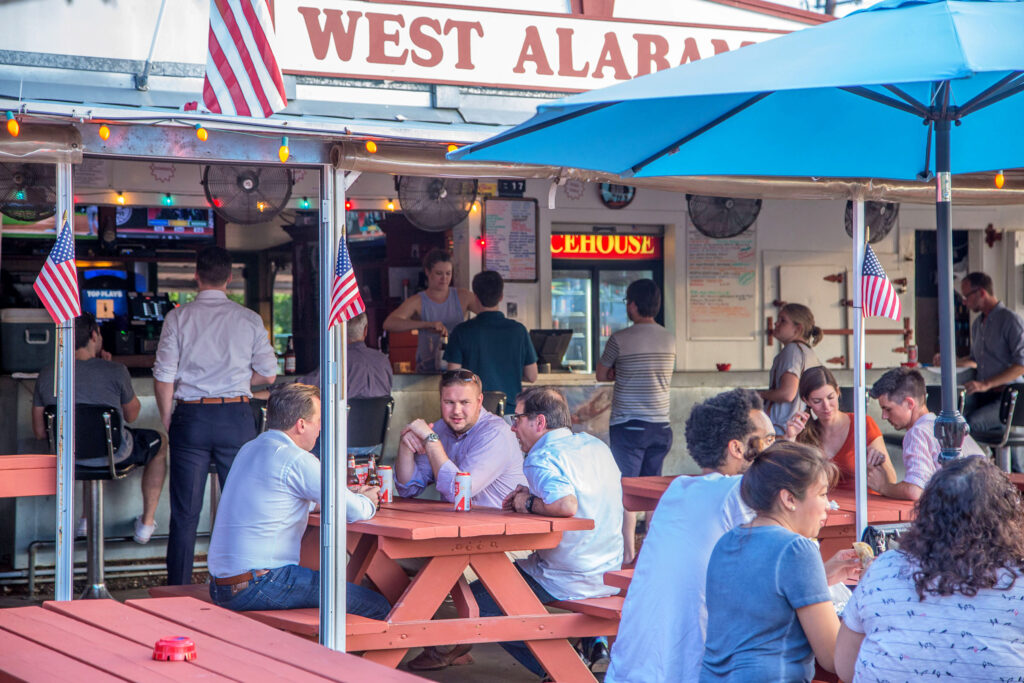 The 1928 West Alabama Ice House has been in Pete Markantonis’ family since 1985. Photo by Will van Overbeek.

Prior to the advent of ubiquitous air conditioning, oftentimes the best way to beat the heat was to go outside with a drink in hand and find a shady spot kissed with a cool breeze. For many adult Texans, the beverage of choice was an ice-cold beer. Backyards and front porches were popular hangs, of course, but for those who wanted to be sociable, the Texas-style icehouse was invented.

But what exactly is an icehouse? Having written a guidebook to Houston dive bars some years back, I’ve wrestled with this dilemma often.

Broadly speaking, if you are from the part of Texas that’s within a line running from Houston to San Antonio and south to the Mexican border, an icehouse is an indoor-outdoor beer joint. And a beer joint is a dive bar that sells only beer, setups (aka mixers), and possibly some token wine often out of a box or in those single-serving-size bottles.

Stories vary as to the origins of the icehouse, and in the absence of an authoritative history, I tend to think they took shape in post-Prohibition San Antonio. By this time Texans were privy to home iceboxes, which naturally required blocks of ice to keep cool. Enterprising ice merchants decided to start selling snacks, hardware, fishing tackle and bait, and then soft drinks and beer. Next came setting out tables and chairs for  people to sit and gossip or slap down dominoes.

Eventually, icehouses evolved into neighborhood taverns. Egalitarian places in nature, icehouses were where you could find a plumber, a banker, and perhaps the neighborhood drunk rubbing elbows at tree-shaded picnic tables, social status abolished for the time being.

Regionally, icehouses are a South Texas phenomenon. That is unquestioned, but why that is remains open for debate. In North Texas, old-timey, ice-only icehouses evolved into cash-and-carry convenience stores, including what is now the global 7-Eleven chain. In South Texas, they evolved into languorous open-air bars.

In a 2002 article, National Book Award finalist and former Los Angeles Times writer Megan K. Stack theorized that their regional evolution was indicative of the religious and ethnic divide between North and South Texas:

“Was it the influence of Catholics, who tended to regard alcohol more tolerantly than their Protestant brethren? Was it some cultural alchemy wrought by the proximity to Mexico, or by the influx of German immigrants to the Hill Country?

“For whatever reason, icehouses teemed on a tight patch of the map, a region roughly bounded by Houston, San Antonio, and the Mexican border. In what [amateur icehouse historian] Tom Denyer calls the ‘more white, more Anglo, more Baptist’ northern counties, icehouses were a far lesser—and these days long defunct—phenomenon.”

Their most ardent devotees describe them quite poetically.

“It’s an ungraspable thing,” Denyer told Stack in her article. “They’re folk art—performance art done by folk without being concerned about audience or reaction. You go into an icehouse and it’s human drama.”

“They’re sloppy, slapdash, added onto,” added Henry Muñoz, former CEO of San Antonio architecture firm Muñoz and Co. “It’s this informal architecture where the canopy records the time of day, where the garage door lets the inside out. Some people think they’re tacky. I think they’re beautiful.”

Some have said that in the prime of the Icehouse Age—roughly the 1940s through the 1970s—their importance as community hubs in San Antonio (their world capital) rivaled that of local parishes of the Catholic church. They served—and still do, in some places—as the collective, combination backyard and living room of entire neighborhoods.

Writers from the East and West coasts love to parachute into Texas and write melancholy pieces about the icehouse’s steady decline. Stack’s piece is called “A Setting Sun for Icehouses.” “Icehouses in Texas Vanishing Like Their Frosty Beer on a Warm Afternoon” was the headline for a 1998 New York Times piece. Twelve years earlier, their correspondent was slightly more optimistic: “In World Capital of the Icehouse, a Way of Life Hangs On.”

And yet new icehouses keep springing up, and old ones get discovered as gentrification spreads into neighborhoods hitherto-unknown to the media. Are icehouses disappearing or not? And what is an icehouse, anyway?

In an attempt to bring some order out of this chaos, I called Brad Moore, the owner or co-owner behind many Houston bars including Big Star and Grand Prize. He likens identifying icehouses to Supreme Court Justice Potter Stewart’s “I know it when I see it” declaration about obscenity in Jacobellis v. Ohio.

Looking for a true icehouse experience? Try one of these places in San Antonio, Houston, or South Texas.

Moore first brings up Houston’s wildly popular Kirby Ice House, which despite its name is most definitely not an icehouse. He rattles off a list of disqualifiers.

First off, he explains, it’s new, and built from scratch. You can no more build an authentic icehouse than you can an authentic dive bar. Icehouses are products of evolution, not creation. “They have to have sold some ice at one point,” Moore says.

Kirby now has a second immense taproom in the upscale suburban Memorial City area of west Houston. This one features 12,000 square feet of indoor service area and 10,000 outside. “Generally, you can’t have more indoor drinking area than outdoor and have it be an icehouse,” he says.

Far exceeding the humble aspirations of the neighborhood icehouse, the Kirby’s ownership group is talking about expanding elsewhere in Texas and into Arkansas and Florida. True icehouse “ownership groups” are more likely to be squabbling siblings who grew up under the picnic tables out back.

Most true icehouses lack even a website, though most do maintain a presence on Facebook, where they plug upcoming benefits for ailing regulars or post videos of the week’s karaoke night. And somewhere on that Facebook page invariably, 100% of the time, without fail, the claim will be made that this particular icehouse offers “the coldest beer in town.”

“What kind of icehouse are you if you don’t make that claim?” Moore wonders rhetorically.

Moore believes that with rare exceptions, icehouses should not sell liquor, but should allow the consumption of it on the premises via the “setup” arrangement, wherein the liquor drinkers purchase soft drinks as mixers. The beer joint aspect is an important part of being an icehouse, and if you add liquor and enclose too much of your property, you are no longer a beer joint nor an icehouse but a dive bar.

As for food, the most conservative old-school icehouses offer only pickled eggs and packaged snacks like chips. Some don’t mind if you bring in outside food. For instance, at an icehouse-like bar on Houston’s east side one afternoon, a total stranger dumped a whole sack of taco truck tacos on our table and told us all to dig in. On weekends and designated nights, there might be a crockpot potluck buffet or meats grilled on barbecue pits outside. An increasing number turf out their dining to food trucks, and over the last 25 years crawfish have become an icehouse staple when in season. Occasionally, roving vendors of foil- and plastic-wrapped black market tamales pass through.

Moore believes when you stray much beyond that menu, you are leaving icehouse status behind. I asked him if a place that bills itself as an “icehouse and grill” could really be an icehouse. “My first inclination is to say no,” he says. As for a place calling itself a “grill and icehouse”? “No way,” Moore says. “Grill can’t be first.”

One thing the Kirby does have in common with icehouses is an early opening time, 2 p.m. Hardcore icehouses are open every hour the law allows, from 7 a.m. to 2 a.m., Monday through Saturday, and noon to 2 a.m. on Sundays. But as night shift jobs have waned in big cities, so too have icehouses that open at dawn’s early light.

While these patio bars are flourishing, true icehouses are slowly disappearing. (In reality, if not name: none of these six new self-described icehouses recently opened in Houston are true to the form.) Gentrification has claimed many. NIMBY-ism has shut down others—sadly too often somebody moves next door to a bar and then files enough complaints that the bar either moves or shutters.

Others evolve into what I think of as “postmodern icehouses.” Almost always these are updates on old icehouses. They introduce a little hipster irony to the decor, give the place a cutesy name, and make a priority of chef-inspired snacks. Drinks are more about local craft brews and artisanal spirits than Miller Lite or Crown Royal.

Even with all that upgrading, the physical footprint of these properties forces them to remain icehouses in spirit, and there still remains many an authentic icehouse to enjoy today.