When It Comes to Czech Culture, Abbott Native Lauren Gerik Takes the Kolache 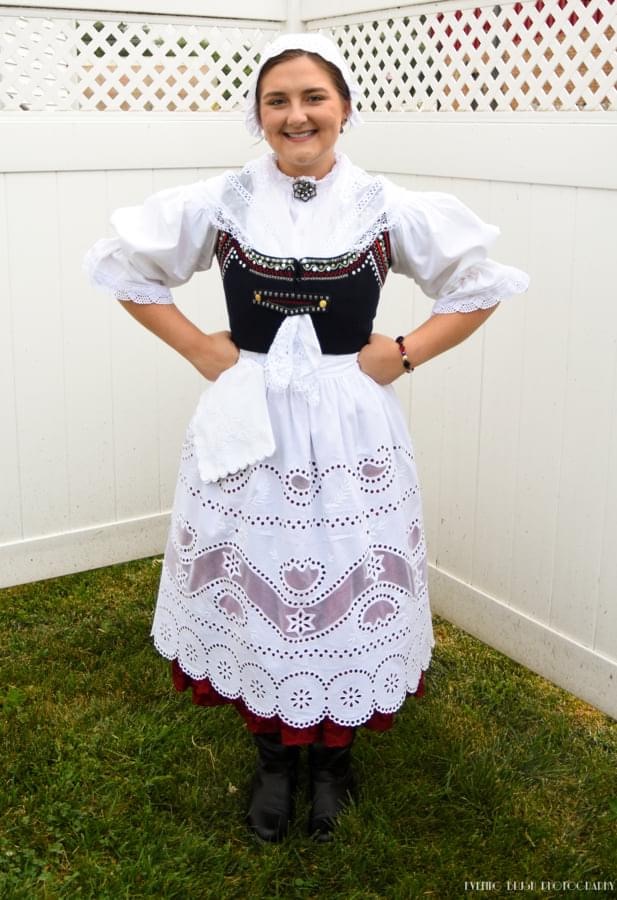 Lauren Gerik wears her winning kroj, with the scarf, apron, vest, handkerchief, and caplet made in the Czech Republic. Photo by Evening Blush Photography.

Wilber, Nebraska, may call itself the “Czech Capital of the U.S.,” but the queen of Czech-American culture makes her home right here in Central Texas. Abbott native Lauren Gerik was crowned Miss Czech-Slovak US earlier this month, becoming the third Texan to win the title in the pageant’s more than 30-year history. Gerik, a sophomore studying English at Texas A&M University, worked her way up to the title by first winning Miss McLennan-Hill Czech-Slovak, her local Czech heritage society chapter’s pageant, then the Texas title, before competing alongside seven other contestants in Wilber for Miss Czech-Slovak US.

In her new role, Gerik gets to travel the country as a cultural ambassador, promoting Czech and Slovak culture and heritage while encouraging younger generations to learn more about their own Czech ancestry. Before heading back to College Station to start a new semester, took a moment to tell us about growing up in the center of all things Czech in Texas, competing in the pageant, kolaches, and her favorite places to enjoy Czech-Slovak culture.

Texas Highways: Abbott is known as the birthplace of Willie Nelson. What else can you tell us about your hometown?

Lauren Gerik: It’s very small. We have a high percentage of Czechs that live in this area, so I’m related to probably about half the people in the town. We have a small Division 1A school here that I attended from pre-K through 12th grade, and we compete in lots of different sports: volleyball, football, basketball, track, all that. It’s a farming community.

TH: What made you want to compete in the Miss Czech-Slovak pageant?

LG: I first really got involved after one of my very good friends, Lydia Pustejovsky, who’s also from Abbott, ran for Miss Texas Czech-Slovak and won. She also competed at nationals in 2019. Seeing the way that whole experience changed her as a person and very clearly deepened her love for her culture just inspired me to get involved in this way as well. I thought this would be a great way to really promote it and cultivate my love for it and share my love of the culture with others.

TH: How do you qualify to compete in the Miss Czech-Slovak Pageant?

LG: You must be a single female between the ages of 16-26, and you have to be of Czech or Slovak descent, meaning you must be able to trace back your ancestry to either the regions of Bohemia, Moravia, Slovakia, Czech Silesian, or Carpathian Ruthenia. You have to be able to prove your ancestry. You also have to have a traditional Czech costume, called a kroj. My family originated in Bohemia and came in the late 1800s to Texas. The kroj that I wore at the pageant is an authentic replica of a traditional kroj from my ancestral village of Trebanice. Bohemian kroj are typically less ornate and made from richer fabrics and have less intricate details on them. So mine is pretty plain, but it’s made with richer fabrics. I helped with the research and picking out of fabrics, and we had most of the pieces made in the Czech Republic. The rest was made locally by a seamstress in West, Maggie Grmela.

TH: What did you learn about Czech culture through this process?

LG: This was actually a question I got asked in my onstage interview. I think it’s really unique to the Czech and Slovak culture that we’re very proud of our culture. We are not afraid to shout it from the rooftops, “We are Czech! We are Slovak!” We have so many different festivals all throughout the U.S. going on all year long. …We all have a great desire to know where we came from, and we love just getting together and celebrating what we have in common with others who share the same ancestry. Other cultures do it but I feel not as much as Czechs.

TH: Did you notice any differences between a Texas Czech-Slovak and one from another part of the country?

LG: Overall, the cultures are very similar depending on where you go throughout the country, and I think that’s what makes being Czech or Slovak American so great. No matter where you go, it feels like home. [But there are] small differences, like our kolaches are a little bit different. I will say, I happen to think that Texas kolaches are the best—I may be a little bit biased. But in experiencing Wilber Czech Days, compared to my local Czech festival in West, they are a little bit different. Here in West, the bakeries tend to make them bigger but with more bread. There, in Wilber, they were much smaller, as the homemade ones are. Here, when people make the homemade ones, they are much smaller. We have a few bakeries that do that. I really love poppyseed kolaches, and the poppyseed kolaches there were finely ground, and here they’re not typically so finely ground. So small differences.

TH: You’re the first Texan to win this crown in 15 years. How does that make you feel?

LG: Very excited and very blessed to be able to have broken our dry spell. I was not expecting it at all. I just went into the pageant weekend trying to have fun and celebrate our culture and do my best to represent Texas Czech-Slovaks.

TH: What are some of your favorite places, restaurants, or events around Texas that celebrate Czech-Slovak heritage?

LG: Some of my favorite places to go, and I’ve been numerous times throughout my life, are the painted churches in the Schulenberg area. I just love going to see them. I love being down in that area because all the little towns you drive through are just traditional little Czech towns that were established many years ago. Some of my family is originally from down in that area, like Moulton and Industry, where my family first settled when they came here. I also love going to La Grange. They have a big museum there called the Texas Czech Heritage Cultural Center, and they have a lot of Czech artifacts in the museum. They also have some historical homes and replicas of homes that Czech settlers would have occupied when they came here. It’s a very cool experience. They also have a big genealogy center, with a bunch of records there. If you are looking to find out who your ancestors were and where they came from, that would be the best place, in my knowledge, to find that out. That’s who I contacted to find out about my ancestry.

TH: And what about closer to home?

LG: Very near my hometown, West is deep in Czech culture. We have Westfest every year [Sept. 3-5 this year]. We have a Czech restaurant, Czech-American, and several bakeries. They also have a museum there, History of West Museum, that contains historical artifacts and the history of West. It’s great to be able to look back and see the town that existed when my family arrived in the West area years ago.

Lastly, one of my more favorite things that I’ve only attended a few years but I love it is the National Polka Festival in Ennis. It’s on Memorial Day Weekend and starts off with a parade on Saturday, and they have multiple halls with polka bands playing all day. It’s just super fun to go there and celebrate Czech culture with people from all over.

TH: Do you need to know how to polka dance to compete in the Miss Czech-Slovak Pageant?

LG: No, but I would say it’s probably helpful to know.