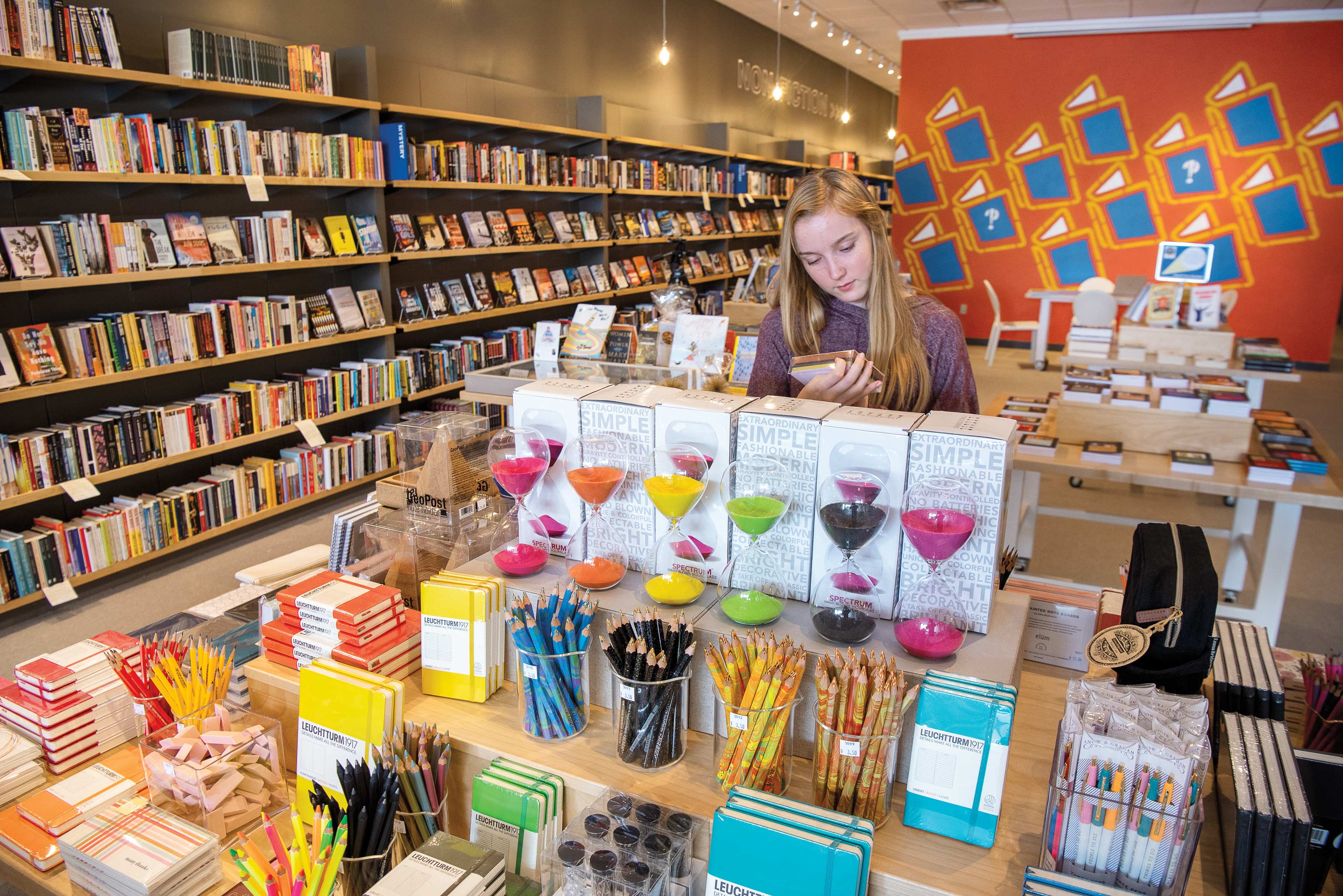 Interabang Books carries 12,000 titles, a catalog that is heavy on literary fiction but doesn’t overlook bestsellers.

A long-smoldering literary scene is catching fire in Dallas, with its book festivals, writing conferences, and poetry readings, not to mention a resident first lady in Laura Bush who founded both the Texas and National book festivals. But the dearth of independent bookstores in a city known for its vibrant retail scene always put a damper on its bookish aspirations—until now.

Interabang Books, a thoroughly Dallas bookstore in high-end Preston Hollow, opened its doors last summer. The store occupies a space in an upscale strip center featuring neighboring draws like Central Market and Hollywood Feed, and a Barnes & Noble across the street. Other independent bookstore efforts in Dallas are found in hip spots like Bishop Arts or Deep Ellum. But there’s no trendy neighborhood for Interabang—just this buttoned-up corner of Preston Road and Royal Lane.

The quartet of founders mulled on the character that should infuse an iconic Dallas bookstore before coalescing on a vision of discovery and excitement. That vision starts with the name. An interabang, or interrobang, is a decades-old printmaker’s symbol. Invented by an American advertising executive in 1962, the symbol imposes an exclamation point—or bang, in printing terms—atop a question mark (or interrogative). Interabang marks were available on typewriters and appeared in some newspaper and magazine articles throughout the 1960s. Several modern fonts still feature the mark.

“Online scrolling is no replacement for browsing. One’s a chore; the other’s a pleasure.”

Next up was curating a selection of books. The store’s 5,000 square feet of retail space boast 12,000 titles, a catalog that is heavy on literary fiction without overlooking bestsellers. “We are far enough along in the era of online retail that shoppers know what they’ve been missing, and they can find it at stores like ours,” says Hall, who in addition to being a co-owner is the operations manager. “Online scrolling is no replacement for browsing. One’s a chore; the other’s a pleasure.”

Ducking in the bookstore’s bright space on a dreary afternoon, I can’t help but fall under the spell of that bookstore magic. Splashed with colorful murals and a large, brightly lit interabang symbol glowing in the front window, the store feels like it’s welcoming patrons to an intimate chat with a fashionable, well-read friend. Zigzagging past stacks of novels, my young daughters and I head to the back of the store where an enticing children’s area awaits.

Shelves brimming with colorful picture books aim to empower young girls with tempting titles like Who Says Women Can’t Be Doctors? and Good Night Stories for Rebel Girls. Handwritten reviews line the shelves below many of the books. A display of The Little Red Fort, a picture book, advertises an upcoming visit by the author. The charming take on a classic fable features a young girl who defiantly builds a clubhouse all by herself.

Surrounded by walls and tables of picture books, a small stage framed by a vibrant floral mural hosts a cozy chair and tot-sized stools. This stage hints at Interabang’s plentiful special programming. The store hosts regular activities and events for both children and adults. From weekly story times for kids to frequent book signings by notable authors, the place boasts a calendar packed with fun. And for literary enrichment after closing time, Interabang records a podcast packed with author interviews and literary musings. 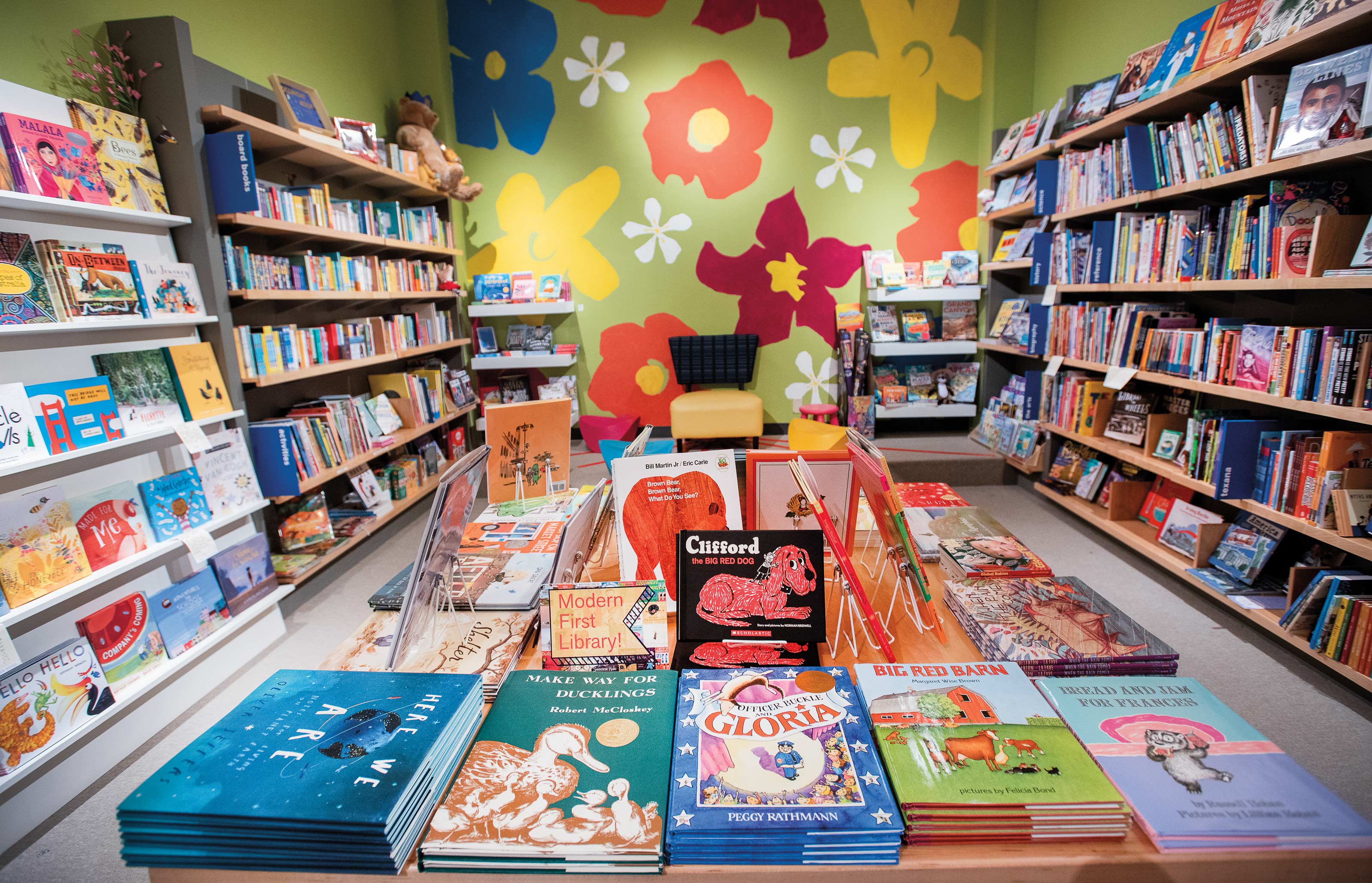 With my daughters contentedly browsing the selection in the kids’ area, I make my way to the front of the store where tables brim with a rotating selection of topical literature. A subtly intellectual vibe pulsates through the book selection, with meaty offerings on both history and politics. I thumb through Sex and the Constitution and notice a whole row of contemporary offerings on the Civil War.

Even harder to resist is a hulking new trilogy of Larry McMurtry’s novels. Called Thalia, the volume contains McMurtry’s first three books—Horseman, Pass By; Leaving Cheyenne; and The Last Picture Show—all written in the 1960s and set in the fictional North Texas town of Thalia, which is thought to be modeled after the author’s hometown, Archer City. Dallas’ own Laura Wilson, a renowned photographer also known as “mother of Owen and Luke,” photographed the cover for Thalia, which shows two range-seasoned cowboys peering downward, their faces half-shaded beneath the brims of their hats.

Wilson, a frequent patron of Interabang, advocates for the necessity of the store in a crowded retail landscape. “We’re very lucky to have such a first-rate bookstore in our city,” she says. “It has a finely curated selection of what people are reading and what people should be reading.”

That reaction to Interabang has permeated the Dallas literary community. The store hardly advertised for its first nine months of business, yet traffic steadily grew. “On Independent Bookstore Day, several locals said they had never understood why a city like Dallas hasn’t had an indie and were overjoyed that now it does,” Hall remembers. “My favorite comment came from a man with a puggle, who said, ‘I always thought Dallas should have an indie, and this is exactly the kind of indie I thought we should have.’” 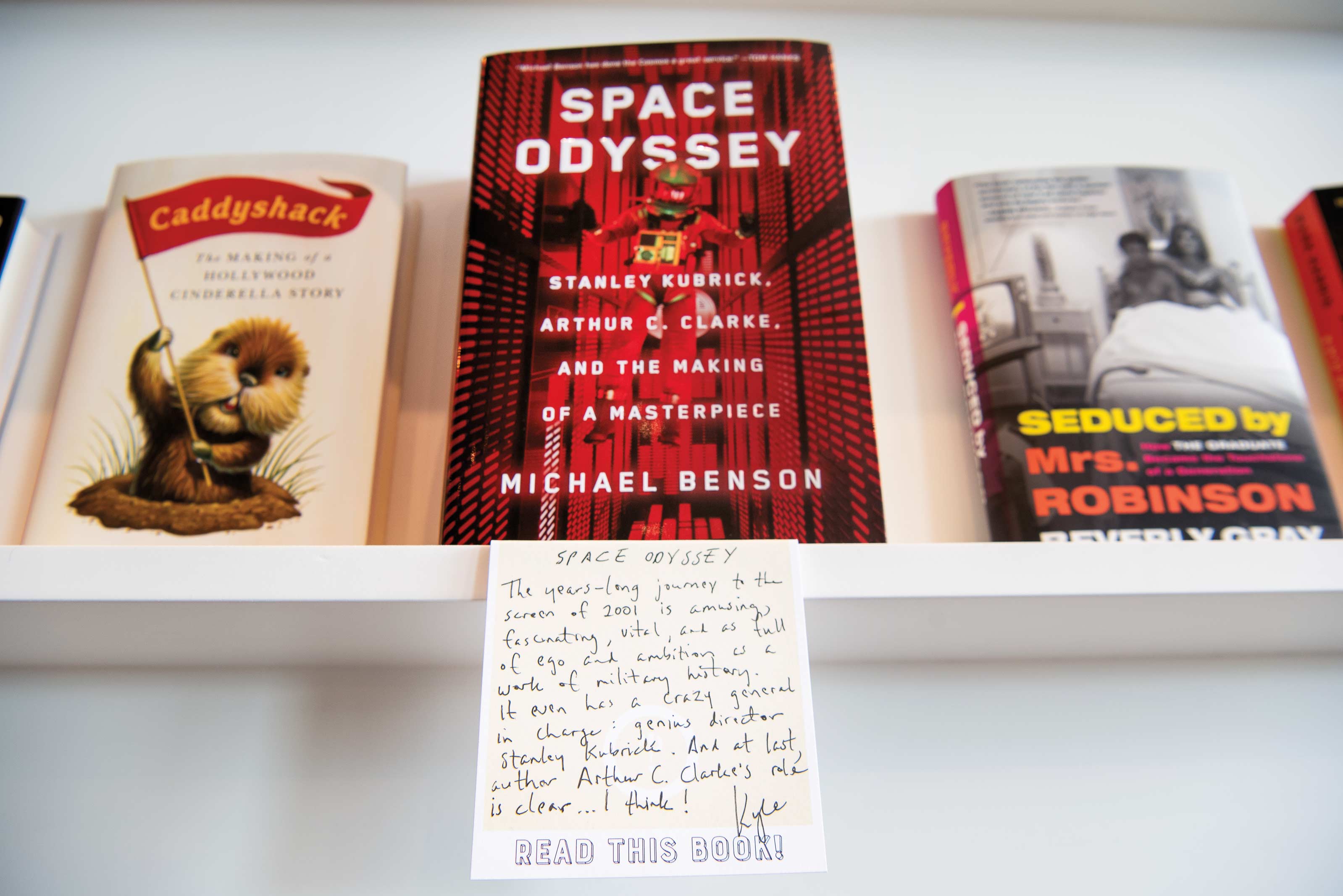 Looking at Wilson’s black-and-white photograph of those weathered cowboys on the cover of Thalia, I ponder such progress: The progress of women’s achievements chronicled in beautiful picture books in the children’s section. The “progress” described in McMurtry’s novels—modernity encroaching on the West. The progress of an online economy feeling a ding of counterrevolution from a spirited independent bookseller.

Children are great counters to philosophical musings, and a drumbeat from the children’s section brings me back to the present. It’s my toddler, who has turned one of those story-time stools into a drum. While her rhythm joins the soulful music piping through Interabang’s speakers, it signals that she’s had enough of civilized bookstore perusing. We select Kristi Yamaguchi’s picture book of an ice-skating pig and a copy of Thalia and head to the register.

Now we have new books to enjoy at home—and a superb new bookstore that facilitates what F. Scott Fitzgerald once described as the beauty of all literature: “You discover that your longings are universal longings, that you’re not lonely and isolated from anyone. You belong.”