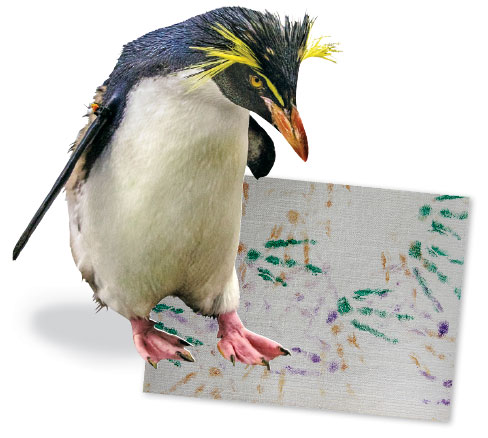 Yes, these birds from the Southern Hemisphere are part of conservation efforts at the Aquarium at Moody Gardens, which has 105 individual penguins representing six different species: King, Gentoo, Chinstrap, Northern Rockhopper, Southern Rockhopper, and Macaroni penguins.

I recently booked one of the aquarium’s penguin encounters, a chance to go behind the scenes and learn more about these birds and their care here. I got even more excited when I learned that the experience includes someone winning a piece of penguin artwork.

The event starts in front of the penguin exhibit, where penguins waddle about on a faux-rock landscape behind a glass wall. On land, they’re comically awkward, but zipping around underwater, they appear quite graceful. After a brief introduction from biologist and tour guide Jessica Raeke, we follow her through double doors and down a hallway lined with placards bearing information on all 18 penguin species and a large world map showing where each lives—from the shores of far-south South America to Antarctica, the bottom of the African continent, and the southern tip of New Zealand. We stop in the kitchen, where aproned and booted workers busily measure and weigh fish for each animal in the facility, 200 pounds a day in all. (That’s nearly two pounds per bird.)

Ascending a short flight of stairs, we gather around the gated doorway into the back of the penguin habitat. A small group of birds begins vocalizing when they spot us. Jessica explains that some of the birds really like the penguin encounters and will jostle each other in hopes of having a turn.

We get to meet our penguin in a small room lined with benches. Because people loom so tall relative to a knee-high penguin, we must sit before the lucky bird comes in. The room is chilly; the resident penguin species like it between 36 and 45 degrees, and the room is the latter. Blankets are provided so everyone remains comfortable.

“The birds come here because they want to,” Jessica assures us. “They enjoy the painting, and it is all up to them. If the penguin isn’t in the mood, there will be no artwork that day.”

A Southern Rockhopper named Hendrix waddles into the room (all the rockhoppers here are, fittingly, named after rock stars). Hendrix lifts his head, shakes his feathers, and lets loose with raucous squawking. This, Jessica says, is his happy sound, and it’s hard not to smile. Hendrix is nine years old and will likely live into his 30s.

Jessica spreads out a towel and he hops onto it, doing his happy dance again and waiting expectantly, nibbling at the towel. Next, Jessica spreads different colors of paint onto squares of foam, sets the squares next to the towel, and, next to them, two white canvases. With a little gentle encouragement, Hendrix walks onto one of the foam squares, where he pauses before walking across the two canvases, chortling as he does so. A quick switch of colors and the penguin repeats the process, creating a multicolored pattern of chicken-like feet on the canvas.

Each bird has his or her own style, Jessica says. Hendrix, for example, “paints” calmly, crossing the canvas in a straight line. His sister Marley takes a freestyle approach, quickly zigging and zagging across the canvas. The aquarium uses non-toxic, water-based paints so that no harm is done if some ends up on the bird, or if one of them decides to taste it.

At the end, the small artist walks around the room, pausing so each of us can gently pet his back. A penguin’s one-inch-long feathers pack tightly to create a sort of wet suit, waterproof and airtight. We’re only seeing, and feeling, the top layer. I must admit penguins are rather odd looking, especially Rockhoppers, with their wild hairdo of yellow feathers sticking out from both sides of their heads. That squawk isn’t something you’d want to hear in the dark without knowing who made it, either.

We then number off, and Jessica draws a number and awards one of Hendrix’s creations to the lucky winner. The other one, along with a stack of previous works of art, is for sale in the gift shop, with all the money supporting penguin enrichment, aka toys for the birds. Changing up their environment on a regular basis is a good way to stimulate and keep them happy. I buy a souvenir and support a good cause. Not bad for 10 bucks.