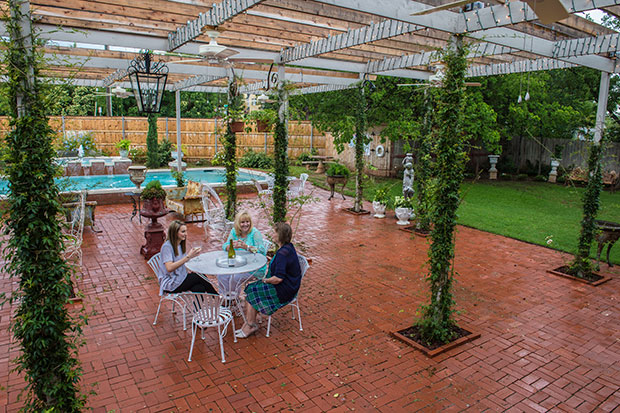 Making plans to see a friend’s art gallery show in downtown Abilene, I pounced on the opportunity to make it a weekend trip. That way, I could revel in some of the stylish new digs that make Abilene such a great over-night escape these days.

Thanks to developer Terry Browder, a significant menu of appealing guesthouses await, along with one very fine boutique hotel. Best of all, the Sayles Ranch Guesthouses and Sayles Landmark bed and breakfast all sit in the middle of town, not even five minutes from the Grace Museum—a sophisticated institution combining an art museum, history museum, and children’s museum—and everything else I wanted to see.

Arriving in Abilene for our first Sayles lodging experience, my husband and I quickly realized that Terry’s creations are among the most beautiful in West Texas. The houses, cottages, and inn lie in a three-square-block area within the Sayles Historic District, immediately southwest of downtown near McMurry University. The cottages are perfect for solo travelers and twosomes looking for a weekend escape. The houses with three and four bedrooms beg for family reunions and girlfriend getaways.

The guesthouses, built from the 1930s to the 1950s, are showplaces unto themselves. Leather sofas, Oriental rugs, thick bath towels, and modern kitchens make each one a place I’d enjoy visiting again. Details vary dramatically from one to the next, but each offers the same standard of luxury. In the one-bedroom Hideout, the bed crafted from Texas cedar logs bears a Vera Wang mattress and Ralph Lauren bedding. The four-bedroom house called City Slickers has Pendleton blankets on the beds and a saltwater swimming pool in back.

Terry’s gift is his ability to thoroughly renovate each home and imbue them with their own personalities, complete with distinctive design elements. Often these are innovative, such as in the Cotton-Eyed Joe house, where hardbound book covers coat the breakfast room walls, giving it a library feel. In the same house, the bathroom walls are covered with distressed tin ceiling tiles and exposed, painted shiplap, sans plaster or drywall.

Terry came from southwest Oklahoma to attend Abilene Christian University in 1972 and never left. He’s worked in real estate, and thanks to his adventurous spirit, he has also enjoyed a career in researching property titles throughout the region. He discovered that he liked serving as a host after working for a few years in a church ministry that provided housing for people needing accommodation near Abilene’s medical center.

Combined with a budding passion for renovation and interior design, the innkeeper role began to appeal more and more. When he and his wife Laura sent their last kid to college and found themselves empty-nesters in 2003, they purchased the four-bedroom home next door to their own and spent a year developing the Sayles Ranch, their first guesthouse. The nine that followed took about nine months each to renovate.

Though the lodgings function as a full-time business, Terry continues working in title research at courthouses across West Texas. His road trips afford prime opportunities to search small-town antiques shops and estate sales for treasures that he can employ in his design work. 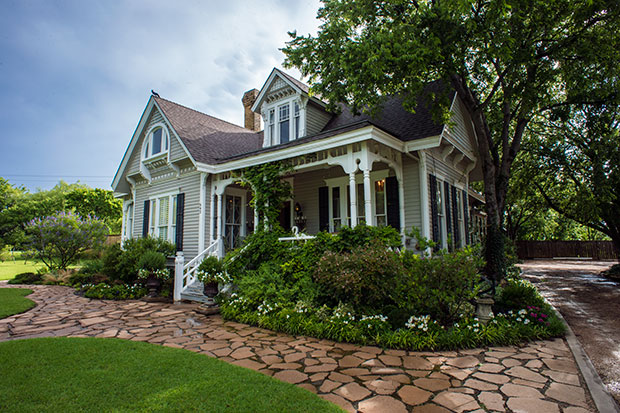 The best place to see Terry’s genius is the Sayles Landmark, a bed and breakfast that opened in 2014 and his greatest labor of love. Sitting on a one-acre corner lot, the 1880s Queen Anne-style home was built by attorney Henry Sayles, who developed much of old Abilene.

“The Sayles were the Crawleys, and this house was the Downton Abbey of the prairie,” Terry told me, alluding to the popular PBS show Downton Abbey, in which the Crawley family was akin to local royalty. “When you walk through this front door, you’re entering a portal to Abilene’s past.”

Terry never dreamed that a four-year project awaited him when he bought the 3,400-square-foot home in 2010. The renovation held more than its share of trials, such as the yearlong process of incorporating the attic into the upper floor to expand the second story. Many a hurdle, some seemingly insurmountable, came with rewiring a home that was built two years before electricity came to Abilene. On top of that, Terry had to figure out how to add private bathrooms for the six guestrooms in a house that was initially designed and built without indoor plumbing.

“Complying with building code requirements was challenging,” Terry said. “I was stubborn and refused to accept some of the initial opinions that doing all this would not be possible. Thinking outside the box does bring results.”

Working with contractors who solved problems with him, Terry made the Sayles Landmark a home that would be the envy of architects and designers anywhere. Each room and its accompanying bath feel organic; never does an element seem forced. The blending of old and new is best accomplished by someone with Terry’s innate sense of style—antique tin ceiling panels from a century-old bootmaker’s shop in the town of Winters with new tufted-velvet headboard upholstery; a bathroom outfitted with an antique French buffet turned into a marble-topped vanity, paired with white subway tile in the shower.

Terry’s implementation of repurposed fixtures and furniture charmed me. In a downstairs suite called the Judge’s Chambers, he has placed an old desk from the Anson post office, along with post office mail cubbies now filled with candles. Huge, ornate light fixtures hanging in the kitchen and den came from a church in Ballinger. A mobile suspended above a dining table is fashioned from 47 19th-Century jailhouse keys. A stairwell railing is crafted from an old cemetery fence.

At the same time, each of the guestrooms and bathrooms offers every modern convenience, from a smart TV to a USB port by the bed, a mini-fridge, coffee pot, and all the requisite bath goodies. In each bedroom, there’s a comfy place to curl up with a book, complete with good reading light, too. 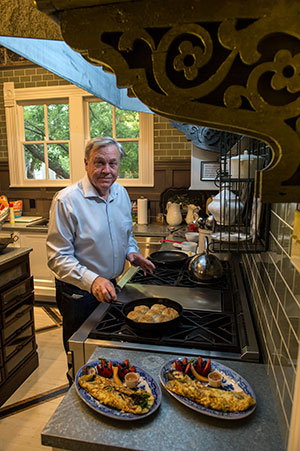 The Sayles Landmark’s exterior elements hold as much appeal: Along the fence on one side of the house, old theater props from the Dallas Ballet Company serve as architectural arches. On the other side, iceberg rose bushes festoon a magnificent arbor that serves as a grand entrance to a large outdoor area that’s popular for weddings. Next to the arbor, a newly built swimming pool featuring spillways, jets, and fountains creates a European look that enhances the setting’s use for rehearsal dinners and other parties.

While we toured, I couldn’t help but imagine hosting a big family reunion here at Sayles Landmark. As though reading my mind, Terry told me the remodeled home’s first event was his own family’s Thanksgiving weekend celebration.

Terry’s contribution to Abilene’s hospitality scene draws appreciation from those involved in entertaining out-of-town guests. Ryan Feerer, a design professor at Abilene Christian University and co-owner of the downtown restaurant Abi-Haus, says Terry has introduced “something special and unique, which we desperately needed.

“There is a certain level of intimacy that comes with a boutique hotel like the Landmark, and people want that,” Feerer says. “Abilene is finally at a place where you can have the experience of eating great food, checking out craft breweries or going to a cool winery, then going back to the Landmark to relax. It’s wonderful.”

Terry is now looking ahead to his next projects. He just finished renovating a mid-century home across town, calling it Mad Men (after the TV show set in the period), renting it primarily as corporate housing. Another project in the Sayles Historic District promises to be a two-year undertaking: the renovation of a five-bedroom, century-old guesthouse. Another, the one he’s already calling Downton Abbey, will feature an English library motif, with the walls wrapped by vintage lawbook covers.

Clearly, we will need lots of return visits to Abilene over the next several years to stay in as many of these houses as possible. These days, overnight lodging is part of the treat when visiting Abilene.