The Chicano Murals of San Antonio’s West Side 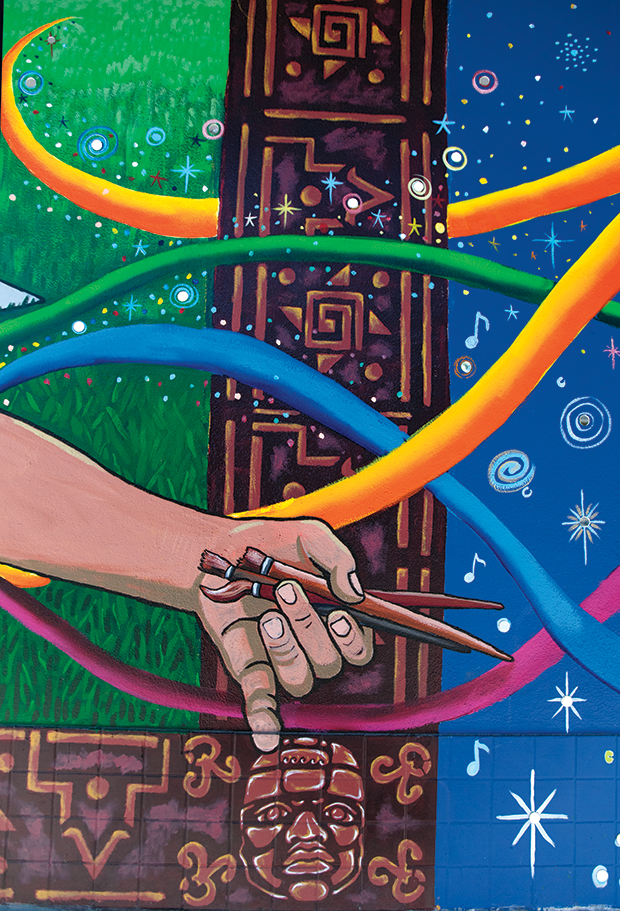 Drop by the San Anto Cultural Arts—at 2120 El Paso St.—for a quick tour of the facilities, to join a walking tour of nearby murals, or to pick up a map and create your own driving tour. Call 210-226-7466 for a schedule of upcoming events.

The West Side is often conscripted to illustrate the city’s traditional Hispanic roots, a slender yet powerful brush to paint such a sizable picture. But Hispanic influences serve as both the warp and weft throughout the entire city’s past, not just the West Side, representing a 300-year history spanning a diversity of American, Spanish, and European ancestry. The West Side is more specific, exemplifying a particular period in this long legacy. The neighborhood’s identity solidified in the early 20th century as immigrants fled unrest in Mexico and established their residences and businesses here. The neighborhood prospered as Guadalupe Street evolved into the area’s main thoroughfare where a thriving collection of restaurants, movie theaters, and shops developed. But in the 1960s, the construction of the interstate highway severed the West Side from the city center. This created a physical as well as psychological barrier between residents and the rest of the city, fueling an economic slide as urban enclaves throughout the country evolved under the strain of a midcentury industrial transition. For neighborhoods like the West Side, it also meant a loss of identity.

The West Side mural project set out to reclaim that identity in the modern age, an effort rooted in the Chicano movement of the 1960s when Mexican Americans across the country made their voices heard. “The Chicano art movement was part of a larger movement of Chicanos struggling for self-determination and the reclamation of their community’s history and culture,” explains Keli Rosa Cabunoc, development manager for San Anto Cultural Arts, the nonprofit charged with curating, commissioning, and restoring the West Side’s mural collection. “Chicano activists looked to artists to empower the Chicano community … to create public art pieces that are not only accessible to the Chicano community, but that serve as a way to educate, to reclaim identities, and to create true-to-life representations of barrio life.” 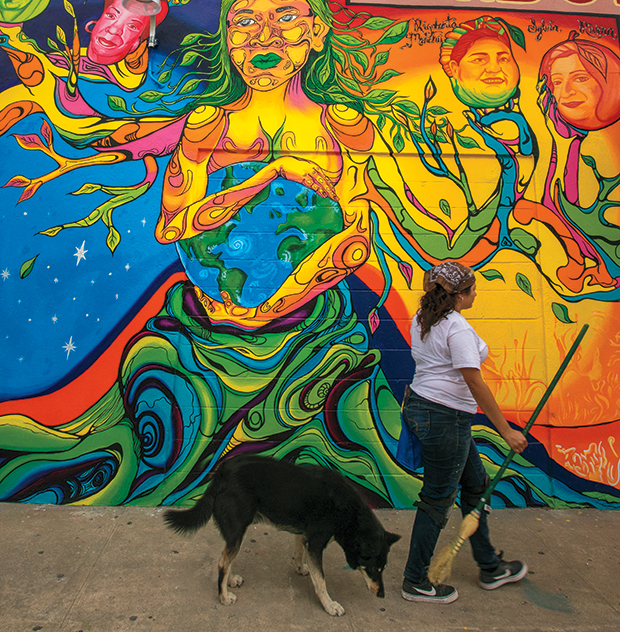 Cultivate the Path to Prestige by Crystal Aria and crew at 2427 W. Commerce in San Antonio.

A tour of the murals, many of them concentrated between West Commerce Avenue and Guadalupe Street (making it handy to travel from one to another), literally illustrates the effort. Across the facade of Herbolaria La India, a local shop selling herbs, religious items, candles, soaps, and oils, artist Mary Agnes Rodriguez and her mural crew created La India, a whimsical fresco depicting the medicinal practices of indigenous and mestizo healers. Colorful mosaic tiles highlight stylized healers, patients, medical herbs, and ceremonies. While the traditions are ancient, they continue to play a significant role in West Side culture today.

Broadside of La India, the mural Cultivate the Path to Prestige defines a more contemporary approach to cultural celebration. The Tree of Life, represented by a female figure embracing the world, highlights accomplished women of color, represented by lifelike portraits of personalities including the Chicana theorist Gloria Evangelina Anzaldúa and the West Side’s own mural artist Mary Agnez Rodriguez. Nearby, along the south-facing wall of a local car wash on North Zarzamora, Una Mesa Para La Gente (A Table for the People) depicts a down-to-earth West Side gathering as community members bring diversity tableside, affirming that everyone has a place at the table in this neighborhood.

San Anto Cultural Arts, the San Antonio nonprofit with a mission to foster community development through the arts, curates the mural collection. Established in 1993 by community youth and arts advocates Manny Castillo, Cruz Ortiz, and Juan Miguel Ramos, San Anto has since developed into a thriving community-based arts organization. In addition to sponsoring more than 50 murals throughout the neighborhood (a map of the murals can be downloaded from the agency’s website), San Anto conducts programs in graphic design, printmaking, sculpting, and other studio arts, with a focus of reaching out to the 9- through 19-year-olds in the neighborhood. The organization also publishes El Placazo, a local paper that helps student contributors learn about journalism, graphic design, photography, and creative writing. 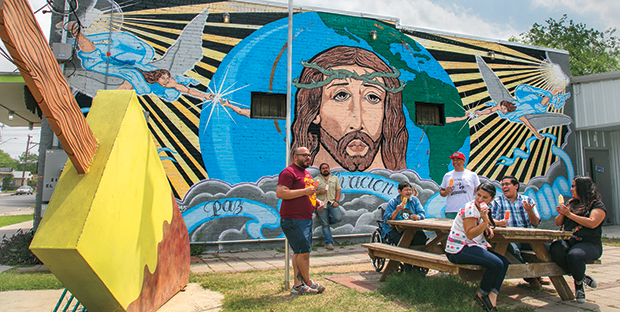 The San Anto patio, located at the corner of El Paso and South Chupaderas, features its own large mural dominated by an enormous face of Jesus by Mike Roman, offset by artist Casey D. Cooper’s sculpture of an oversized popsicle. The juxtaposition pays hom-age to both the reverence and levity inherent in the West Side character. The San Anto staff, artists, volunteers, and students make every effort to bring the two together during special events like the Barrio Block Party, a mural-specific celebration organized each time a new or restored mural is unveiled. The ceremonial unveiling includes a con safos, an effort to protect the mural from defacement. The Chicano term, abbreviated as “c/s” somewhere on each mural, means any offense against the mural casts, in turn, an offense against the offender. The mural also receives both a traditional religious and indigenous blessing. Block Parties feature live music, food, and art happenings like “steam prints,” sizable woodcut-like prints made with sheets of carved fiberboard, lots of rolled ink, and a rented steamroller.

Restoration, preservation, and new construction all play a major role in the West Side’s renaissance today. But much of the early 20th century flavor remains. Almost every morning, dawn mixes with the scent of sweet dough baking in the kitchens of La Popular, a favorite local bakery on the corner of El Paso and South Brazos Street. Across the road, the mural Poder de Muralismo; Cuentos son Arte (The Power of Muralism; Stories are Art), covers a block-long wall of the Guadalupe Cultural Arts Center. This magical documentation of San Antonio’s Chicano history unravels in a vibrant display of symbols revolving around a larger-than-life portrait of Manny Castillo. The mural is a memorial to Castillo, San Anto’s first executive director and West Side resident who succumbed to cancer at 40 in 2009. Along La Popular’s own wall, musicians play the trumpet, strum the guitar, and squeeze the accordion while kids look on and couples dance to conjunto. The mural, called La Familia y Cultura es Vida, celebrates the truth in its title, demonstrating that for the West Side, and perhaps for neighborhoods everywhere, family and culture is life.