A 75-mile drive on the state's highest highway 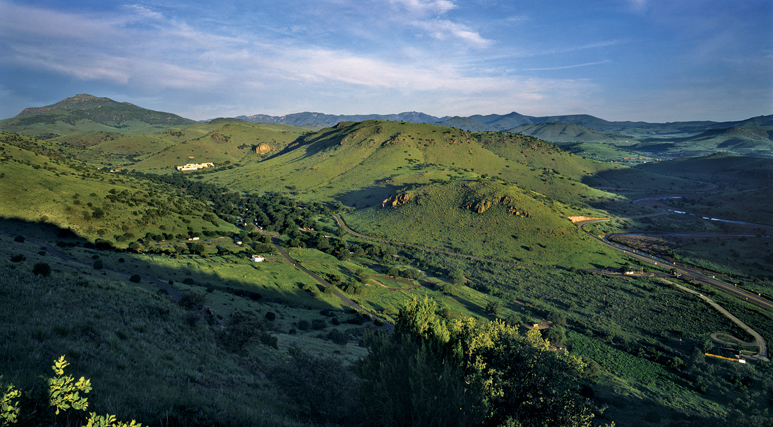 From a distance, West Texas’ Davis Mountains float above the Chihuahuan Desert like a smoky mirage. Formed millions of years ago by volcanic activity, they rise up in green slopes punctuated by pine and oak trees, carpets of golden grasslands that wander through the canyons, and jumbles of rocky spires and escalating peaks. They are—at more than 8,000 feet—a dramatic contrast to the flatness of the surrounding desert, where the sun digs up secrets and a dark, starry night covers them up again.

Last November, my wife, Lindy, and I decided to explore this inviting pocket of the Trans-Pecos. With lodging secured in the bucolic town of Fort Davis, we set aside an afternoon to meander the Davis Mountains Scenic Loop, a 75-mile stretch of Texas 118 and Texas 166 that is the loftiest public highway in the state, and certainly among the most scenic.

We drove out of Fort Davis on Texas 118 on the north end of town and turned west into Limpia Canyon. Our first stop was three miles ahead at Davis Mountains State Park, a rugged and lovely 2,700-acre park known for its hiking and equestrian trails and dramatic views of the 19th-Century military post, now a National Historic Site, that gives the town its name. We followed the park’s main road through groves of gray oaks, Emory oaks, and junipers shading a string of picnic spots and campsites, and pulled into the parking lot of the park’s historic Indian Lodge, built in the 1930s by the Civilian Conservation Corps. Here, at the lodge’s Black Bear Restaurant, we unfolded our map to plan our day.

Fortified by pancakes and under close supervision by a family of javelina, we left the state park and  turned north onto Texas 118, passing mountainside homes and historic ranches as we climbed higher and higher.

We stopped to marvel at the stunning view of a wide, green valley hemmed in by a horizon full of mountains.

After about 10 miles, we stopped at a picnic turnout at Dead Man’s Canyon to marvel at the stunning view of a wide, green valley hemmed in by a horizon full of mountains.  According to the Fort Davis Historical Society, Dead Man’s Canyon got its name from an incident back in the 1880s, when the snow-covered body of a young man named Horace Powe was found propped against a boulder with 11 bullet holes in him.

Spur 78 turns off Texas 118 about a mile later and leads to the McDonald Observatory, a research unit of the University of Texas and one of the world’s leading centers for astronomical study. We stopped  at the visitors center for a self-guided tour brochure that led us to the top of Mount Locke for a close-up look at some of the most powerful telescopes on the planet. From our vantage point more than 6,700 feet above sea level, Texas unfolded in indescribable beauty. (Nightly Star Parties offer visitors the chance to look at stars and galaxies through these high-powered scopes, and we returned later that night for yet another eye-opening experience.)

With daylight still in our favor, we continued on Texas 118 and disappeared deeper into the isolation of the mountains.  Out here there are no billboards, no honking cars, no gas stations. Naturalists consider the entire Davis Mountains range a “sky island” because many of the plants and animals found here—pinyon pines and madrones, shorthorn lizards and silver-haired bats, for example—rarely appear elsewhere in Texas.

We stopped at Madera Canyon eight miles later for a break at the Lawrence E. Wood Picnic Area, a roadside park surrounded by swaying grasses and such high-elevation trees as pinyons, alligator junipers, and ponderosa pines. The only sounds we heard were the gusts of the wind and the calls of irascible scrub jays. All around us were 33,000 acres of wilderness protected by the Nature Conservancy’s Davis Mountains Preserve.  We took a short walk on the Madera Canyon Trail for a backcountry peek into remote woodlands and meadows.

Just past the picnic area, the road makes a sharp, blind curve to the right.  Off in the distance, beyond the main gate to the Preserve, is the impressive north face of Mount Livermore, the highest summit of the Davis range. We could clearly see Baldy Peak, the highest point at 8,378 feet.

The Loop cuts through mountain gaps and windswept valleys and makes a breathtaking drop down into a vast plain, where it turns left onto Texas 166 for a long arch some 46 miles back to Fort Davis.  The highway gradually slopes upward through a wide swath of grasses and junipers, then continues dead-on toward the 7,686-foot Sawtooth Mountain. Its distinctive precipice reminded us of broken teeth in a saw blade.  On the right is the Rockpile, a jumble of gray stones the size of airplane hangars.

Some eight miles from the junction of Texas 166 and 118, the Loop works its way into a mountain gap called Broke Tank Draw and climbs to the top of H.O. Hill. Here, a gate marks the entrance to a private ranch. This spot denotes the drain-age divide between the Pecos River and the Rio Grande.

From our vantage point more than 6,700 feet above sea level, Texas unfolded in indescribable beauty.

We descended into still another can-yon and stopped to rest at a remote picnic spot, momentarily transfixed by a lizard sunning himself on a rock and a hawk riding the thermals overhead. And then we followed the Loop out of the mountains into a savannah of grasses and scrub brush, finding ourselves once again in the Chihuahuan Desert.

We rolled with Texas 166 as it bent east and eventually arrived at Point of Rocks, a cluster of tremendous boulders that shelter a few picnic tables. Earlier that day, Lindy and I had stopped at the Stone Village Market in Fort Davis to pick up deli sandwiches, and we hauled them out here for a picnic while we searched through binoculars for pronghorn sheep that sometimes graze nearby.

The highway moves out onto the treeless slope of Cienega Flat and gradually drops down to join Texas 17 for the return to Fort Davis, entering town on the south side just past Delores Mountain.

Engineers broke ground on the first stretch of the Loop on January 9, 1932, and opened the road on June 28, 1947.  Although it took them 15 years to finish the project, Lindy and I enjoyed their beautiful road in four hours.

I folded up our map and put it in the glove compartment.  We’ll need it for the next time we drive the Davis Mountains Scenic Loop.

Published in the November 2012 issue.