Dallas and Houston will host games when the U.S. hosts the tournament in four years 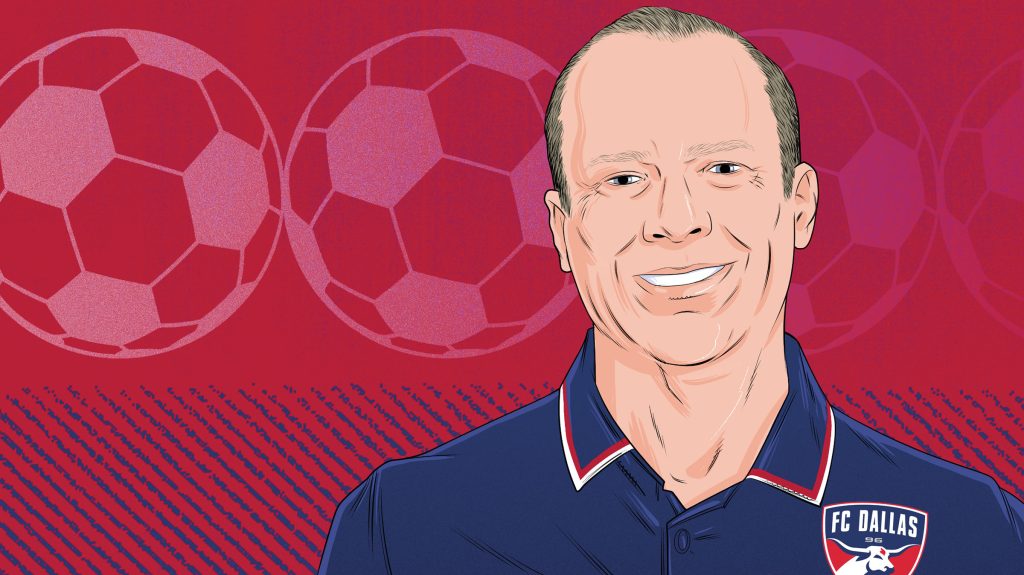 The eyes of the world turn to Qatar this November as the planet’s best soccer players converge on the Middle Eastern nation for the monthlong sporting spectacle known as the World Cup. The U.S. Men’s National Team will be among 32 teams in the tournament, with matches in the opening round against Wales, England, and Iran. Over 1 million fans are expected for the World Cup, and one of them will be Dan Hunt, the president of Dallas’ professional soccer team, FC Dallas.

While the quadrennial tournament is arguably the globe’s biggest entertainment event, Hunt’s trip isn’t just for fun: As chairman of the committee bringing the World Cup to Dallas in 2026, Hunt is a central player in his hometown’s preparations. FIFA, the governing body for international soccer, announced in June that AT&T Stadium in Arlington will be one of 16 host stadiums for World Cup 2026, which will be held jointly by the U.S., Mexico, and Canada. Houston is also one of 11 host cities in the U.S., with games at NRG Stadium.

Hunt and the Dallas committee started working in 2017 to land the World Cup, and now their focus is on attracting national teams to set up their 2026 headquarters in the DFW area. They also hope to host semifinal and final matches, along with FIFA’s international broadcast center. He envisions fans traveling between Dallas, Houston, and Kansas City, also a host city, for games. “The scale of this is enormous,” he says. “It’s like the Super Bowl on steroids.”

TH: Why did your father get involved in soccer, then a fringe sport in the U.S.?
DH: His football endeavor started in 1959, and then he went and saw a Shamrock Rovers match in Ireland sometime around 1964 and just loved the game. And then he watched the ’66 World Cup final and fell in love with it. He also loved that families could play: Moms and dads and brothers and sisters could all kick a soccer ball around. He decided the United States, and more specifically Dallas, was ready for professional soccer in 1967 and founded the Dallas Tornado. He was about 40 years early on that strategy. It took some ups and downs, but it’s really paid off dividends now.

TH: Why did you decide to get involved in the business of soccer?
DH: I came to it through our family business, and I grew up playing soccer. From the time I was 10, I was playing club soccer. That’s one of the things that makes Dallas and Texas so unique is how rich the club programs are. It dates back to when my father started the Tornado. A lot of those players stayed. They were internationals, but they stayed and started families, and they built these youth clubs because soccer was the sport they knew. Dallas has this legacy of great club soccer and great high school soccer.

TH: What were the key elements of Dallas’ host city bid for World Cup 2026?
DH: The rich soccer history, dating back to the Dallas Tornado, indoor soccer with the Dallas Sidekicks, and now FC Dallas, formerly the Dallas Burn. You have that base here, but Dallas is also one of the most dynamic business cities in the world, and Texas has one of the most vibrant economies in the world. And we hosted in 1994 [at the Cotton Bowl]. Now we have a unique situation because AT&T Stadium where the Cowboys play is one of the greatest economic drivers in all of sports. It’s globally known. And you also have the two baseball stadiums adjacent to it, so three major sports stadiums adjacent to one another. You start to factor all those things together, and it makes for an incredible bid for the World Cup.

TH: How many World Cups have you attended?
DH: I’ve been to every one since 1986. I started in Mexico when I was 10. My favorite was probably 1990 in Italy. The reason is I was 13 years old at the time, and I got 35 days of my mom and dad’s time without cell phones. We got to go see 22 matches and travel the country. We drove to 21 of the 22 matches, and you just don’t get that time with your parents uninterrupted. It was really special in a country they knew so well.

TH: How would you describe the atmosphere of the World Cup?
DH: It’s like the passion of college football on steroids. College football is unique because of the attachment and association, all the alumni at those games. But it’s on steroids when you see a World Cup match—the enthusiasm that these fans have and the effort they’ve made to travel and support their teams, it means so much to them. And you’re seeing the greatest soccer talent in the entire world.

TH: The National Soccer Hall of Fame opened at FC Dallas’ Toyota Stadium in 2018. How did that come about?
DH: It didn’t sit right with us that the Hall of Fame had been closed since 2010 in upstate New York. We wanted to bring it back to life to honor those who have given so much to the game. There were other markets that wanted to do it, but we presented a viable plan of building it into an active stadium and soccer complex. We have over 2 million visitors a year at Toyota Stadium and Toyota Soccer Center. You have people who are already showing up, so they can come and experience it. It’s also created a side opportunity for convention business. It’s not often that you get to sit and dine in the same room as four Women’s World Cup trophies.

TH: Describe soccer’s vitality in Texas compared to 20 years ago.
DH: It’s not even in the same universe. We got the keys to FC Dallas in 2002. Houston [Dynamo] wasn’t there yet, and Austin [FC] is only in year two now. You look at today, and FC Dallas is having the largest attendance it’s ever had. You’ve seen tremendous success in Austin, and Houston is doing well and has new ownership. It’s a great thing for Major League Soccer, building this three-team rivalry within the state. We represent such diverse communities between the three teams, and Texas has an incredibly talent-rich market, producing players for the national team.

TH: How do you assess the chances of the U.S. men’s team in Qatar?
DH: We had a shortage of players in their prime in 2018 [when the U.S. did not qualify for the tournament], and now that we go into the 2022 World Cup, we’re still super young, but there’s some good veteran leadership. My assessment is it’s a group that should qualify for the elimination round. But in 2026, I truly believe that we can compete for a semifinal because that core group of players will all be in their prime. And I think we’ll have a chance—it’s on our home soil.

The National Soccer Hall of Fame at Toyota Stadium in Frisco opens Wed-Sun and on FC Dallas game days. nationalsoccerhof.com