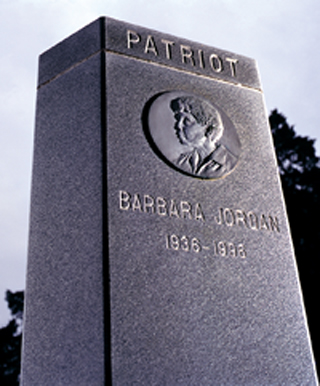 Jordan was not only the first African American to be buried in the Texas State Cemetery—her statue was also the first of a female on UT’s campus. (Photo by J. Griffis Smith)

The Austin Bergstrom International Airport named its passenger terminal for Representative Jordan, and a commemorative statue and plaque stand in the baggage claim area.

Browse Jordan’s personal papers in the Congresswoman Barbara Jordan Archives at the Department of Special Collections in the Robert James Terry Library on Texas Southern University’s campus in Houston. Call 713/313-4416.