From Palo Duro Canyon to Schroeder Hall, Texas is full of second-place winners that are first-rate destinations 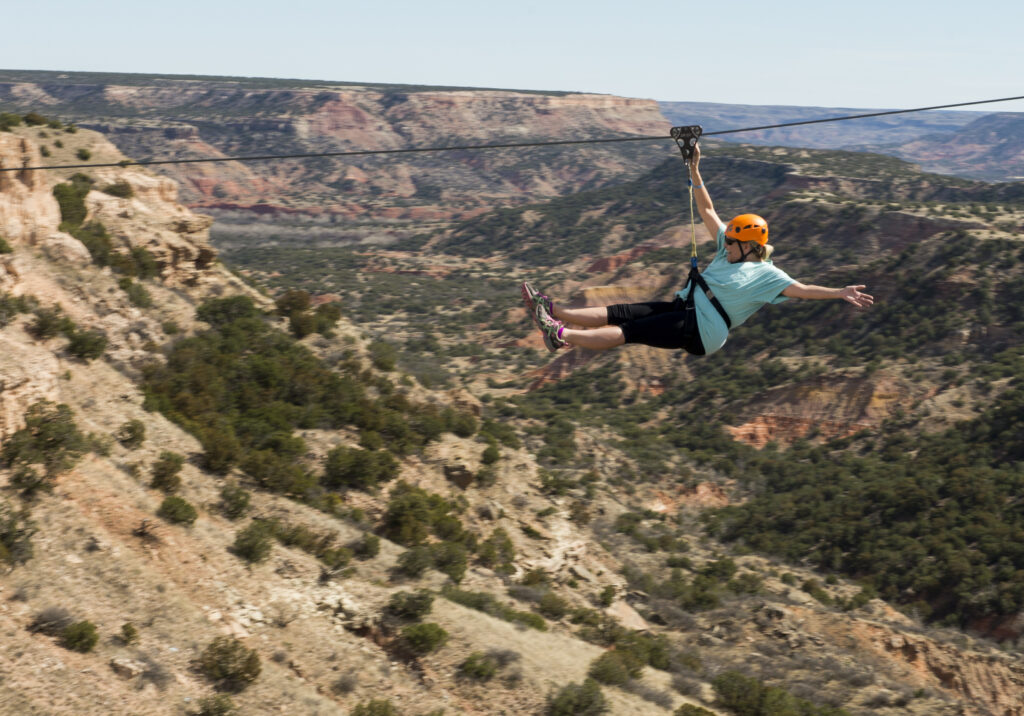 Ziplining at Palo Duro Canyon Adventure Park over the second-largest canyon in the United States. Photo by Michael Amador.

Throughout the United States, many places lay claim to being the “first” or “largest” of their kind. Harvard was the country’s first college. Pittsburgh’s KDKA was the first commercial radio station. Pennsylvania boasts the nation’s largest botanical garden, the 1,100-acre Longwood Gardens.

While these firsts are rightly popular, Texas can also claim its share of distinctions: Texas was the first and only state to enter the union as its own country. And the state takes first place in the category of winged mammals as the home of the nation’s largest bat colony, Bracken Cave. But considering Texas is the second-largest state in the nation, both in land mass and population, it’s also interesting to consider where else Texas comes in second.

Incorporated in 1839, Austin is the second-southernmost (north of only Tallahassee) and the second-most-populous state capital (only behind Phoenix). That’s not counting the 1.5 million bats that hang out under the Congress Avenue bridge.

While Austin is widely known for live music, SXSW, barbecue, and tacos—and sometimes barbecue IN tacos—it’s also home to an impressive array of murals.

S fit the theme of this tour, stop by the Peace Love Austin and Tau Ceti works of art—both stunning murals a few blocks apart on 2nd Street.

Schroeder Hall opened for business in 1892, 14 years after Gruene Hall. Since then, it’s played host to countless Texas musicians, from Merle Haggard and Willie Nelson to Randy Rogers and Kevin Fowler.

Aric Krause, co-owner alongside his wife Christine, has heard people claim Schroeder Hall is no longer a traditional dance hall. But he doesn’t see it that way.

“I firmly believe we’ve lost so many venues like ours in Texas because they didn’t want to stay relevant to younger generations and changes in the Texas culture,” Krause says. “We’re trying to bring back that particular tradition.”

Schroeder Hall has made extensive renovations in recent years, including a completely redone exterior and kitchen. Additions of a green room, load-in area, indoor and outdoor stages, and a sound system—built from scratch in 2018—help artists sound their best.

Enchanted Rock, the second-largest batholith in the U.S.

Enchanted Rock covers 640 acres, elevating 425 feet above the surrounding area and 1,825 feet above sea level. Visitors can traverse nearly 11 miles of trails, and if you’re lucky, you might spot unique wildlife like the painted bunting or fairy shrimp. Known as a batholith—a granite dome-shaped mound originally formed underground—is second magnitude only to California’s famed Sierra Nevada in the U.S.

“The summit trail is the iconic hike, but some of the greatest views and the best chances to see wildlife are at the loop trail around the base of the summit,” says Sean Doerre, of the Fredericksburg Convention & Visitor Bureau. “If you only do the summit trail, you may miss a lot of what the park has to offer.”

The area became a Texas Historic Landmark in 1936 and has ample folklore. Native American tribes revered it as a holy portal due to the creaking sounds that occur when the rock cools; another legend says spending the night on the rock turns you invisible.

Founded in 1876 during Reconstruction after the Civil War, Prairie View A&M first opened to eight African-American men in 1878. Today, it offers 36 bachelor’s and 31 master’s degree options to nearly 10,000 students. Though Texas A&M was founded in 1871 and opened to students in 1876, making it the first public institution of higher learning in Texas, Prairie View A&M is the state’s first historically black college or university.

The university sports more than 50 buildings across 1,440 acres. Known as “The Hill,” it sits on a rural plot of land and offers gorgeous views and impressive buildings. One highlight: the 105,000-square-foot Nathelyne Archie Kennedy Building at the entrance of the campus, with its curving redbrick walls appearing to float in the air.

“The building is designed to be a teaching experience for all Architecture and Construction Science students,” says Ikhlas Sabouni, a dean and architecture professor. “Students can join in the discussion of what makes a building personal to those wanting a profession of creating extraordinary spaces.”

Palo Duro Canyon, the second-largest canyon in the U.S.

Translating to “Hard Wood Canyon” from Spanish, Palo Duro Canyon spans 120 miles across the Texas Panhandle, with depths of 800 feet. While it’s not as expansive as the Grand Canyon, it’s mighty impressive in its own right.

Reserve a cabin or camping spot under the stars at Palo Duro Canyon State Park. Or, enjoy the song, dance, and fireworks of TEXAS. The outdoor musical has told the area’s history every summer since 1965 in an amphitheater in the canyon’s natural basin.

In nearby Amarillo, the Cadillac Ranch art installation on Interstate 40 encourages graffiti. You can also grab a hamburger at the Golden Light Cafe or try to consume a 72-ounce steak from Big Texan Steakhouse. Finish within 60 minutes and get it for free.

If you pull that off, we recommend not going back for seconds.