To the Bat Cave! 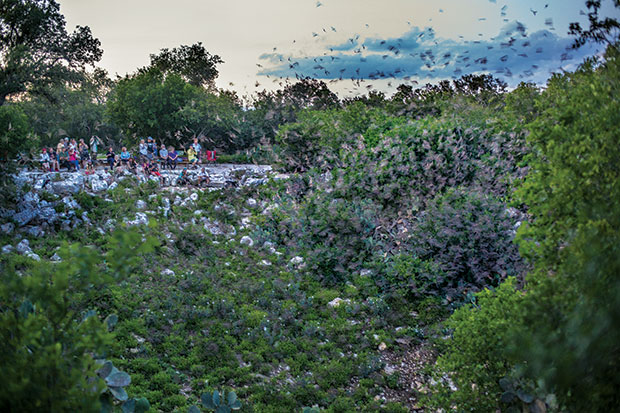 I’m thinking to myself, “That cave doesn’t look big enough for all those bats.”

The cave in question is Bracken Cave, the heart of a 697-acre property adjacent to Natural Bridge Caverns, Texas’ largest network of publicly accessible caves. Located about 25 miles northeast of San Antonio, the Bracken Cave acreage is owned by Bat Conservation International (BCI), an Austin-based conservation group dedicated to preserving bat populations and their ecosystems. It’s a land rich in wildlife, including golden-cheeked warblers and painted buntings, but people know Bracken Cave for its bats. From March through October, more than 10 million Mexican free-tailed bats make Bracken Cave their home. It is, in fact, the largest bat colony in the world.

Watching them emerge from the cave is truly a one-of-a-kind experience. “These days it’s kind of hard to wow kids, but this does it,” says Fran Hutchins, the Bracken Cave Preserve Director for BCI. “It’s a spectacular sight.” Hutchins and his team of expert volunteers offer summertime opportunities to watch the bats emerge from the cave to feed on insects throughout the Hill Country.

Like the other bat colonies in Texas, including Austin’s million-member roost beneath the Congress Avenue bridge, the Bracken bats play a crucial role in the ecosystem. They reduce the need for pesticides by keeping the insect population down, and are a food source for predators like snakes, owls, and hawks. “Without the bats, the thousands of acres of crops south of San Antonio would be overrun with agricultural pests,” says Hutchins. “On an average night, each bat can eat its weight in insects. The farmers are thankful for them, for sure.”

From March through October, more than 10 million Mexican free-tailed bats make Bracken Cave their home. It’s the largest bat colony in the world.

Mexican free-tailed bats spend the winter in Mexico and Central America, where they mate, and then return north in the spring, dispersing in male “bachelor colonies” and female “maternity colonies” throughout the southern United States. Evidence suggests that Bracken’s maternity colony has existed for more than 10,000 years. By mid-June, millions of pregnant bats will have given birth, doubling the population.

It’s hard to imagine how so many bats live in such close quarters. Surrounded by a deep bowl of live oaks and prickly pear cacti, Bracken Cave is— at 650 feet long by 100 feet wide—really just a sinkhole. Once the pups are born, up to 500 bats will share a space the size of the page you’re reading right now. It’s normal for the bats to be in such close proximity, but according to BCI docent Coco Brennan, Bracken’s hot, humid environment makes it particularly cozy for the baby bats. “It can be more than 104 degrees inside the cave,” Brennan says. “It’s like a giant incubator.”

As I wait for the bats to emerge, sitting on wooden benches with a few dozen other bat-watchers, the air is thick with anticipation. And thick with something else, too—the pungent smell of bat guano, which wafts up from inside the cave. We’re not the only ones waiting; I notice a red-tailed hawk perched in a tree 40 yards behind the cave, biding his time until dinner.

It’s close to 8:30 now, and the sunset’s pink streaks fade to darker shades of purple. As I peer through my binoculars, I hear excited whispers around me. “I see them, I see them! They’re coming!”

Thousands of bats appear at once, pouring through the mouth of the cave in a streaming, vibrating current. We whip out our cameras and climb onto the benches, craning our necks for a better look.

The bats fly in a circle, resembling a tornado as they gain altitude and fly southeast. It will take four hours for all of them to emerge from the cave, and though the regular tours end when the sun sets, BCI offers opportunities to spend more time at Bracken Cave, including overnight campouts that allow you to see the bats return in the morning.

Most people trickle back toward their vehicles at nightfall, but I stick around for a while longer. The early summer evening feels cool, and I can feel a slight breeze from the bats’ wings as they propel themselves upward. The millions of flapping wings patter like a soft, constant rain, interrupted only by the occasional screech of red-tailed hawks. To the south, I can see the lights of San Antonio, and I know that millions of bats are flying in the skies overhead—just as they have for centuries.