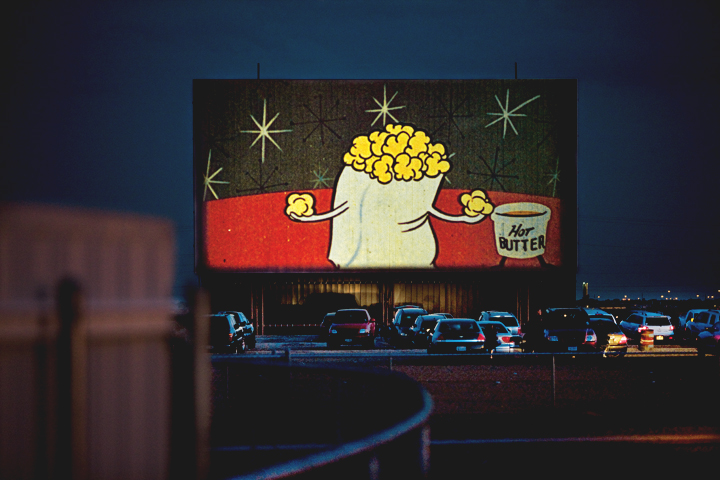 Anticipation fills the air as movie-goers at Midland’s Big Sky Drive-In Theatre wait for the sun to go down and the screen to light up. Two teenagers sit on a couch in the bed of a red pickup truck, texting and talking. Nearby, a group of four plays cards on the tailgate of another truck and munches on crunchy jalapeño poppers. In the back of a minivan next to them, a little boy in Spiderman pajamas snuggles in between his parents, asking his mother, for the hundredth time, “When’s it going to start?” That little boy’s question lingers on everyone’s mind. She looks west toward the fading silhouette of a pump jack and answers, “Soon.” 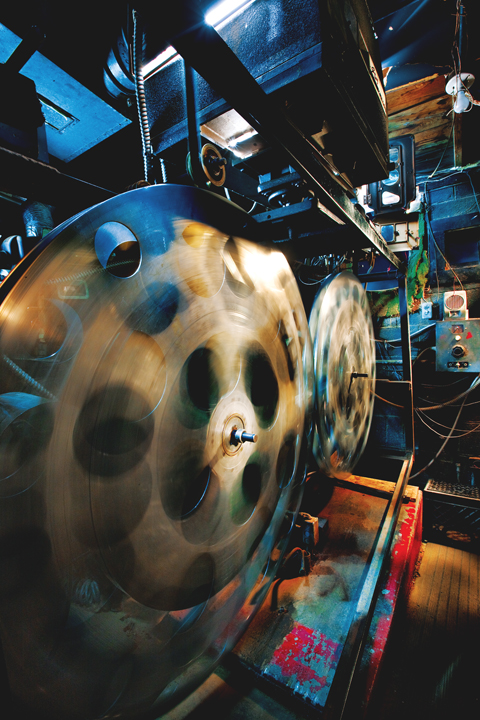 The projectors at the Sky-Vue Drive In Theatre in Lamesa have been spinning away for more than a half century.

In less than a decade, Texas has gained five family-friendly drive-ins, and now offers 16, testament to a trend toward a retro-nostalgic, community-inspired, movie-going experience that the United Drive-In Theatre Owners Association says began in the 1990s. It’s a far cry from the all-time high of 388 in 1954, but there’s no denying that the drive-in is making a comeback in Texas. The question is: Why, in this era of Blu-Ray and home-theater systems, would anyone want to watch a movie outdoors, on a lawn chair or through a windshield?

At the Showboat Drive In Theater in Hockley, just west of Tomball, Chris Rumfolo (co-owner along with her husband, Johnny) can answer that. “For the older generations, it’s a flashback. But families make up our biggest clientele, because not only is going to the drive-in economical entertainment, but parents get to enjoy something just as much as the kids.” She chuckles and adds, “Then, there are the teenagers who think this is something brand new.”

Big Sky’s general manager Lamont Furlow sums it up, saying simply, “It’s about being together.”

And, speaking of togetherness, Gene Palmer, owner of Gatesville’s Last Drive In Picture Show, says that drive-ins are still great places for romance. “One of our regulars asked if it would be okay to propose to his girlfriend on the screen, so we made him a film clip that said, ‘Jennifer, will you marry me?’ Everybody in the theater got into it and people kept coming up to the snack bar all night asking, ‘Well, did she say yes?’ It really made the night special, especially since she did say yes.”

Now it’s your turn to say, “Yes”—to a drive-in movie, that is! Grab some popcorn, unfold a lawn chair, put on your PJ’s, and get ready to enjoy the show.

From the live oaks framing the sunset to the fresh scent of wet grass in fields nearby, the setting at the Crossroads Drive-In invites relaxation. As soon as you drive through the gate and receive warm greetings from co-owner Mike Viets, you’ll leave hustle and bustle behind.

Instead of a canned recording, Viets’ Texas twang comes over the sound system throughout the night. First, he suggests, ”Y’all head to the snack bar for your made-from-scratch pizza.” When he tells the crowd, “Come on and get yourself some not-chos, or a pick-ul,” you can’t help but be charmed by this aspect of Shiner’s quintessential Texas small-town setting.

As the last of the sun fades, you’ll hear his voice again when he says, “Y’all take a look at that moon tonight!” With that, he flips a switch, and—pop!—the digital music on CD over the PA system changes to the movie projector’s audio track, and you hear the wondrous sound that announces the movie’s beginning. But, no matter where your imagination takes you, don’t lose your ticket stub. Viets holds a drawing for modest prizes during intermission, handing out “pick-uls, not-chos,” free passes, glow sticks, and promotional items from the movie studios.

For a real treat, peek through the window into the projection booth near the concession stand. There, you’ll see a 1942 Simplex projector, its 2 1/2-foot-diameter spools shimmering as they catch the light, and Viets (who’s also the projectionist) finessing the film. He spends hours reloading the reels every couple of weeks because, he says, “I’ve got lots of regulars, so even though it’s real hard to get first-run films if you’re not a big theater or a chain, I like to program new movies as often as I can.”

With four screens and room for 1,000 cars, the Galaxy is the state’s largest drive-in. Its atmosphere leaves you wondering if you’re at a drive-in theater or a carnival. The moment you arrive you notice the Galaxy’s delightfully campy setting.

As darkness comes, bright, LED-lit palm trees illuminate the two Park & Putt miniature golf courses, where a five-foot-tall fiberglass model of SpongeBob SquarePants watches over every stroke with a grin. Throughout the grounds, you’ll find that SpongeBob has company in the form of metal-sign buddies such as Smokey Bear and Woodsy Owl.

Antique metal speakers deliver sounds of the show, even though the Galaxy just opened in 2004. Use the speakers, or tune in with your car stereo. Or, better yet, use both as you listen to the dialogue of the first-run movies offered here.

Because the Last Drive In Picture Show has kept its screen continuously lit since October 4, 1950, it’s not technically part of the recent resurgence (while others have shut down for awhile and reopened, the Last Drive In Picture Show has never gone dark). But this granddaddy of Texas’ theaters deserves recognition, as does its original Century projector still in service after an amazing six decades.

Not only is the Last Drive In Picture Show one of the oldest in the nation, but it’s also the last of a handful of “MoPeds,” theaters that cater to both walk-in and drive-in crowds. While its original metal speakers stopped working long ago, owner Gene Palmer says he left them in place “both for nostalgia and to help guide folks with their parking.”

When the light fades, be sure to pay homage to Palmer’s pride and joy: a neon sign reminiscent of the glory days of drive-in theaters. It’s a beauty. In 2003, Palmer restored the classic sign, which was originally built in 1948 for the Tern-Bel had once read only “Drive In.” “I think I spent more on that marquee than just about anything else here!” he quips. “But it was worth it.”

The phrase “Chihuahua-What a Sandwich” painted on the side of the Sky-Vue’s concession stand announces that you’ve arrived at the birthplace of this famous South Plains movie fare. Made with two corn tortillas (made locally by Pedroza’s Mexican Restaurant), pimiento cheese, shredded cabbage, and chili, this popular “sandwich” remains the house specialty.

Skeet Naret, the original owner of the Sky-Vue, and his father, Edward Albert Naret (who created the sandwich), came up with the catchy name for the menu item.

Inside the concession stand, newspaper articles featuring local Lamesa residents paper the walls. The theater’s choice of wall paper attests to the role it plays in the community. “Those are articles about students who worked here, FFA news, thank-yous from schoolkids,” explains owner Sam Kirkland, “and our granddaughters’ tumbling stuff is up there, too!’

Kirkland says, “Parents thank us all the time because they can bring their kids here to play on the same playground they once did.” With its old-fashioned metal merry-go-round, slide, and swing set, the area is reminiscent of playyards before plastic. Kirkland says that he, too, once played here. “This theater’s been a big part of my life for nearly 50 years. In fact, I started my first job here when I was 11.” That’s one of the main reasons he reopened the local landmark in the 1980s after it had sat dark one summer.

The celebratory vibe at the Showboat Drive In, from the smiling hamburger and happy hot dog painted on the side of the snack bar to the ’70s music playing over the sound system, lends this place an air of escapist delight. You get the impression that even when the show hasn’t yet begun, guests have already been transported by the magic of movieland.

You’ll find lots to do here besides seeing a movie. Check out the RCA-Brenkert projectors with legendary Strong “Mighty 90” carbon arc lamps (mid-20th-Century classics) that sit smack-dab in the middle of the concession stand. (While the Showboat doesn’t use them to project its films, they do still work.) You can also play arcade games, tetherball, or watch kids rally a soccer ball.

Kids, says Rumfolo, are a big reason she likes this business. “It’s so fun to see how excited they get!” she adds. She recounts one child’s breathless question: “How do you turn on that big TV when you start the movie?”

Considering how those West Texas stars shine on you here, the Stars & Stripes Drive-In couldn’t be more aptly named. Glance up every now and then and appreciate the constellations as you watch a first-run double-feature on one of the theater’s three screens.

You can catch both dinner and a movie at the Stars & Stripes. Owner Ryan Smith offers an extensive menu that includes specialties such as corn fritters with honey, Black Angus beefburgers, and the famous Chihuahua sandwich. There are even fried twinkies for dessert! And, on those cold Panhandle evenings, warm up with a giant cup of hot cocoa.

One of Texas’ newer drive-ins, the Stars & Stripes glimmers, especially inside, where retro ‘SOs meets modern movie-going. Chrome stools sit atop the checkered black-and-white flooring while classic movie posters hang above point-of-sale computers and previews for new movies on LCD screens. “Oh, and we have air conditioning in the cafe,” Smith says with a smile. “They didn’t have that at the drive-ins in the ’50s and ’60s!”

No surprise this theater is especially well run. The movie business runs in the family. Smith’s great-grandfather was the originator of the Chihuahua sandwich and West Texas theater icon Skeet Noret is his grandfather.