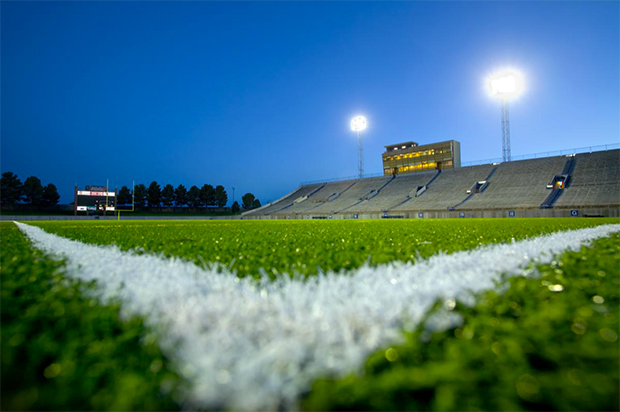 There are niches of Texas football heritage elsewhere in the state.

Cowboys coach Tom Landry said, “Football is to Texas what religion is to a priest.” Get ready for a football season with a tour of the state’s most dazzling stadiums. Read Pigskin Palaces from the August 2017 issue of Texas Highways magazine.

A Brownwood Chamber of Commerce suite is dedicated to the late Gordon Wood, once the state’s winningest high school football coach. In Junction, a Texas Historical Marker commemorates the “Junction Boys,” survivors of Aggie Coach Paul “Bear” Bryant’s 1954 boot camp who formed a team that went undefeated two years later. In Austin, mementos of the segregation-era Prairie View Interscholastic League are displayed at the University of Texas’ Community Engagement Center.

The African American Museum at Dallas’ Fair Park houses the Texas Black Sports Hall of Fame, honoring football pioneers like Abner Haynes and Bob Hayes. A small plaque at Texas A&M’s Kyle Field tells the story of Aggie engineers who produced the first ever over-air live football broadcast in the Southwest in 1920.

Visits to Alamo Stadium in San Antonio, Ratliff Stadium in Odessa, Farrington Field in Fort Worth, and even the Works Progress Administration-era Tomato Bowl in Jacksonville are ways to embrace Texas high school football history.

Nicknamed the “Rock Pile” because of its limestone construction, Alamo Stadium opened in 1940 and is still in use. A grainy black-and-white film clip at the Texas Sports Hall of Fame in Waco shows future NFL star Warren McVea galloping on a long touchdown run in one of the early interracial high school playoff games at Alamo; he’s so fast it looks like someone sped up the video.

Farrington Field, capacity 18,500, also a WPA project, supposedly was inspired by the success of the Fort Worth Masonic Home’s “Mighty Mites” of that era. Until now a high school venue, Farrington Field is the 2017 home for Texas Wesleyan University’s new football team. Ratliff Stadium in Odessa, opened in 1982 as one of the modern temples for Texas high school football, is familiar as the setting for the book, movie, and TV show, Friday Night Lights.

The Museum of the Gulf Coast in Port Arthur displays the high school letter jacket of a local favorite, Jimmy Johnson, who coached Oklahoma State University, the University of Miami, and the Dallas Cowboys. Johnson coached Miami to a national championship in 1987 and the Dallas Cowboys to Super Bowl victories in 1992 and 1993. He’s now a broadcaster.

In Mount Vernon, you fill find memorabilia of that community’s favorite son, Don Meredith, at the Franklin County Fire Museum. A star quarterback for SMU and the Dallas Cowboys who went on to become am NFL broadcaster, Meredith rarely missed an opportunity to refer to his hometown.