For the Love of the Lyric

Written by Lois Rodriguez, Photographs by Will van Overbeek | From the June 2014 issue | Updated: July 10, 2020 | Filed Under: Culture 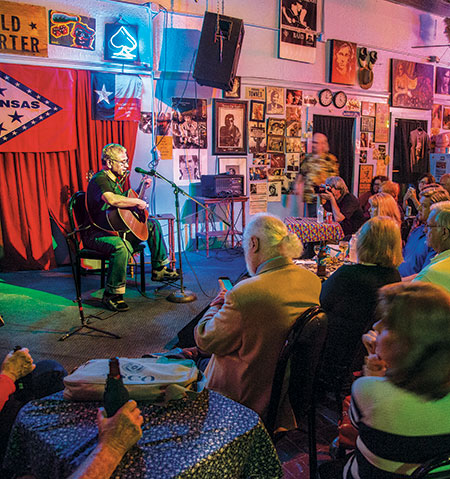 Among the many good reasons to visit downtown Galveston, one of the more obscure, but best, is a passion for song. As often as four nights a week, savvy aficionados of a distinctive Lone Star State troubadour tradition trek to the Strand Historic District.

There, just around the corner from the majestic 1894 Grand Opera House, a quirky little performance venue on 20th Street showcases talent and celebrates the history of the Texas singer-songwriter movement.

Operating at this site since 1996, the Old Quarter Acoustic Cafe is, in the words of Houston radio host James “Blues Hound” Nagle, “one of the finest listening rooms in the state.” Situated on the ground floor of a three-story red brick building that dates to 1914, this haven for picker-poets provides a modest yet functional space for performers and audience. “Nothing pretentious about it, bare bones,” Nagle adds, “but the quality of entertainment on any given night is just par excellence.”

The timeworn room seats about 80 people. Dimly bathed in the glow of neon signs, its walls display memorabilia that serve as a whimsical archive of Texas songwriting and local history: posters, photographs, paintings of people and psychedelic abstractions, a couple of beat-up guitars, and a pair of mud-crusted red rubber boots that recalls the notorious 2008 hurricane—“IKE” inscribed on one, “SUCKS” on the other. In the rear, there’s a basic, cash-only wooden bar backed by a darker vintage wall unit that frames a large mirror. The limited selection of beer, wine, and soft drinks is a clue to patrons that the Old Quarter prioritizes listening. 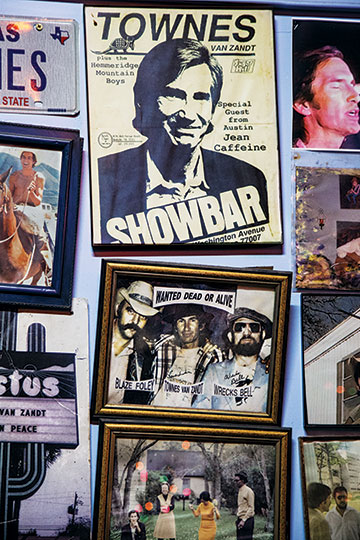 The focal point, wedged into one front corner, is the triangular stage, which rarely holds more than two or three musicians at a time. The long list of artists who have graced it includes the late Townes Van Zandt, the legendary Fort Worth-born troubadour known for his brilliant songwriting and conspicuous hard living. Though he died in 1997 and performed here only twice, Van Zandt clearly reigns as patron saint of this establishment. His likeness on the walls—rendered in photographs, oil paintings, sketches, and silk-screened T-shirts—comprises the dominant mo-tif among the artifacts, imparting an almost shrine-like quality to the space.

However, as evidenced by the bounty of other posters, publicity photos, and snapshots on exhibit, numerous artists of substance have contributed to the legacy—from Guy Clark, Joe Ely, Ray Wylie Hubbard, and the late Blaze Foley to relatively younger talents such as Jesse Dayton, Ruthie Foster, and Gordy Quist. “All the great Texas writers play there,” says Dayton, referencing his revered elders.

Yet with open-mic sessions on Wednesdays and Thursdays, the Old Quarter Acoustic Cafe is also a domain where anonymous upstarts can learn and make themselves known. Citing one who went on to become a national star, Dayton quips, “I met Hayes Carll there before he could shave.”

Despite his recording success and busy touring schedule, Carll still plays this little venue, most recently in February. Carll keeps coming back to the Old Quarter, he explains, because the owner is “a personal friend and mentor. He gave me a home when I needed one, taught me just enough to keep it between the ditches, and helped me know when to fold and when to go all in.”

That man, the creator and caretaker of this songwriter’s sanctuary, is the amiable Rex (aka “Wrecks”) Bell, founder and proprietor of not only the Galveston club but also its progenitor—the original and now-legendary Old Quarter in Houston. From 1965 through 1977, that former venue functioned as home base for much of the Bayou City’s singer-songwriter scene.

Located in an aged, two-story building on the gritty east side of downtown, the original Old Quarter seated even fewer patrons than its Galveston descendant, yet generated a nexus of creativity and exchange. “We were such outlaws then, being hippies,” Bell reflects, and the club’s countercultural identity fostered new possibilities during changing times. The key, perhaps, was a booking policy that featured older African-American blues masters, such as Lightnin’ Hopkins and Juke Boy Bonner, as well as youthful folk, country, and rock-inspired songsters, such
as Jerry Jeff Walker, Guy Clark, and most famously, Townes Van Zandt.

In fact, fans worldwide know of Bell’s erstwhile music club as the setting where Van Zandt produced his definitive recording—the classic 1973 double album Live at the Old Quarter, Houston, Texas. Others have learned of it more recently via the prominent Americana singer-songwriter Steve Earle, who often recounts how he, at age 18, first met Van Zandt there in 1972. Earle, who grew up in San Antonio with an infamous wild streak, bonded with Van Zandt and became his protégé. Their relationship inspired Earle’s 2009 Grammy Award-winning album Townes.

Bell, of course, had a special relationship with Van Zandt, too. In addition to providing stages in Houston and
in Galveston where Van Zandt performed, Bell also played bass with him for years. As evidenced in the documentary films Be Here to Love Me: A Film About Townes Van Zandt (2004) and Heartworn Highways (1981), the two were as close as brothers, on stage and off. In fact, Bell personally inspired the poignant and oft-recorded Van Zandt ode titled “Rex’s Blues.”

Apart from his collaborations with Van Zandt, Bell’s credentials as a professional musician include intermittent work from 1965 to 1980 as bassist with Lightnin’ Hopkins—including a storied 1979 gig at New York City’s Carnegie Hall. Moreover, in 1980, Bell played on the Houston studio sessions for Happy Woman Blues, the first album of original material by Lucinda Williams—well before she became famous and Time magazine declared her in 2001 to be “America’s best songwriter.” These days Bell still performs, as both singer and instrumentalist, in a duo with his wife or with his longtime partner in the Hemmer Ridge Mountain Boys, Mickey White.

Ever since Van Zandt’s untimely death on New Year’s Day 17 years ago, Bell has regularly staged an anniversary event at his Galveston Old Quarter. Though billed as a “wake,” it’s actually an open jam session celebrating the immortality of Van Zandt’s songs. Anyone—professional or amateur—is encouraged to bring an instrument and pay tribute by singing a composition or two from the Van Zandt repertoire. Since its premiere in 1998, the annual gathering has triggered pilgrimages among devoted fans. “People come from all over,” says Bell. “The room will be packed, and I’ll have another 100 people milling about outside.”

As he nears septuagenarian status, Bell remains committed to sustaining the Old Quarter Acoustic Cafe as long as he can. There have been setbacks in recent years that threatened its survival, including the sudden death of his wife LeAnne in 2005 and the physical and psychological devastation wrought by Hurricane Ike in 2008. “We had seven feet of water in the club,” Bell recalls. “It ruined everything. … I really was so disheartened I didn’t want to reopen.”

Yet this unlikely institution, like Bell himself, is a survivor—buoyed in large part by a network of friends and supporters. “I had so many fans and musicians who didn’t want to see it close; they started having benefits for me,” he explains. Grateful and inspired, he undertook the difficult labor of rebuilding the club, and by late December 2008 the Old Quarter was reborn again.

In 2009 Bell remarried, and his current wife, Janet, now collaborates with him to perpetuate the heritage and vitality of the Old Quarter Acoustic Cafe. As the host couple, they extend a friendly welcome to patrons who respect the founding principle: “You have to listen when people play. ‘Where Lyrics Still Count’ is our motto,” says Bell. “We really want people to listen to the words.”