On a warm summer morning, former First Lady Laura Bush walked among the butterflies in the garden behind her dogtrot-style vacation house on Prairie Chapel Ranch in Crawford. The likes of former Israeli Prime Minister Ariel Sharon and U2 singer Bono have ventured on these grounds before, but on this July day viceroys and queens were the VIPs. They flitted about as Bush interpreted the landscape. There’s antelope horns milkweed, she said. There’s gaillardia. There’s basket-flower, and there’s a gourd. “This one’s called purple mist, or blue mist,” she said. “If you want butterflies, then plant this.” 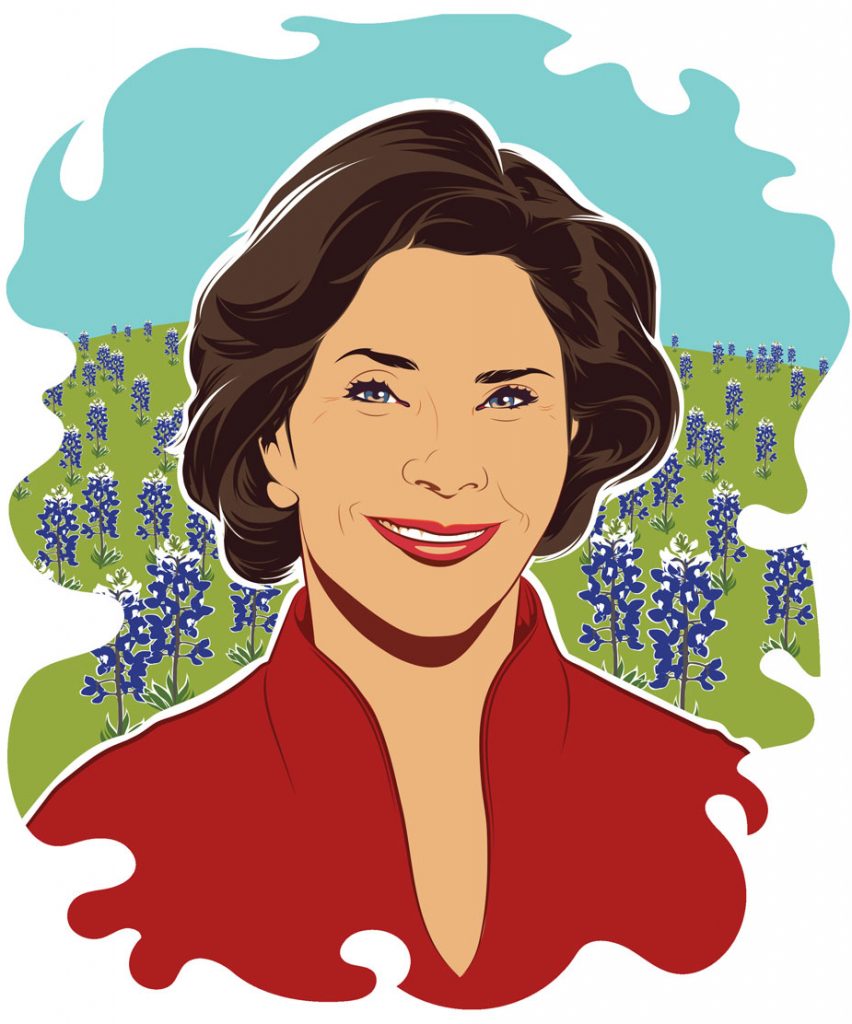 Ten years removed from the White House, Bush is not entirely out of politics. In June, she wrote an op-ed for The Washington Post in which she decried the separation of children from their parents at the border. But these days Bush primarily directs her efforts into the preservation and promotion of the environment, continuing the legacy of her predecessor, Lady Bird Johnson. Through Texan by Nature, a nonprofit she co-founded in 2011, Bush convenes businesses and environmental groups on projects that benefit our natural state.

Born in Midland and now living in Dallas, Bush was in Crawford to celebrate her husband’s 72nd birthday. As the former president mountain biked with wounded warriors, Mrs. Bush continued through the garden and into the newly built studio where her husband paints. Works-in-progress abounded, including paintings of the Bushes’ grandchildren and prairie landscapes with cacti and wildflowers. There was also a painting of Mrs. Bush. “It’s not very good,” she said, jokingly. “He knows I don’t really like it.”

Q: Why do y’all like spending time here?
A: George loves to ride his bike here. He has 43 miles of bike trails—interesting, that’s his number as president. It’s just being outside, which we love. I mean, everyone does, really. There’s no research that proves that people feel better when they’re outside, but we all sort of know it intuitively. Even if you can look out a window in your office, you’re happier than in your cubicle.

Q: Why is it important to appreciate the outdoors?
A: This generation is outside less than any generation ever in the history of man. There are just so many reasons to be inside. We’re on screens, we’re on computers, we’re watching Netflix. When George and I were growing up, your mother said, “Go outside,” and then she’d sit on the back porch and call you in for dinner. I think it’s really good just to be outside for mental health, but I also think it makes you more imaginative. I remember building ranches with mesquite beans for cattle in Midland, but of course they were just in the sand and dirt. It was just a way to play.

Q: What is the strategy of Texan by Nature?
A: There are a number of corporations that have large campuses, maybe of 140 acres or more, and we’ve encouraged them to plant the plants that pollinators need, like the antelope horns milkweed, which monarch butterflies are dependent upon for their migration up north for the summer and then back down to Mexico for the winter. So, our idea is to work with corporations to get more acreage planted in natives. But we want to talk with everybody. We want congregations to make sure they have native plants in their churchyards. We have beautiful wildlife that depends on native plants.

Q: Aren’t corporations supposed to be enemies of the environment?
A: I think that’s more of a stereotype that corporations are greedy and wouldn’t care. But the fact is they do, and they’re made up of people who do. We did a project with BAE Systems outside of Austin and gave them the “Monarch Wrangler” designation because they planted milkweed. Then the people that work there became really interested, and now they’re even keeping bees. If we don’t have bees, we wouldn’t have food, we wouldn’t have agriculture. They’re so central to our life, and people don’t know it really.

Q: How did your family cultivate your love of nature?
A: As an only child growing up in West Texas, I spent summers with my grandparents in Canutillo, a little town barely outside of El Paso, right by the Rio Grande. I helped my grandma for hours in her garden. She grew flowers in the center of stray recycled tires. She taught me how to keep asparagus, yuccas, ocotillos, and pomegranate trees thriving in the harshest conditions. In Midland, I learned to love the outdoors from my mother, who if she was not reading, could be found outside. My mother is a self-taught naturalist who remembers the name of every wildflower and is passionate about birds. Her fascination with bird watching began when I was 10 and she volunteered to be my Girl Scouts leader, which involved helping us earn our bird badge. We would sit Indian-style with binoculars and wait for birds to swoop by. She’s 98 and in Midland still.

Q: What does Lady Bird Johnson mean to you?
A: She means a lot to me, and I knew her. She opened the [current version of the] Wildflower Center when George was governor. We hosted the luncheon for the opening on the lawn of the Governor’s Mansion, and we went to the gala that night. I’ve always been inspired by her. A lot of people thought, “Isn’t that sweet? The little first lady likes wildflowers.” But in fact she was really the beginning of the conservation movement and the whole idea of using native plants in the landscape.

Q: As you’ve traveled around Texas, which cities have stood out as dynamic?
A: Well, Austin, of course, is the most. But I’ve lived all over the state. I’ve lived in Houston. George and I had a lake house in East Texas, by Athens. My grandmother lived in El Paso. My other grandmother lived in Lubbock. I really have lived in every part of the state. Besides, being first lady of the state really gave me a chance to see Texas in a way that most other people haven’t because it’s so big. Fort Worth has done really well. There’s a lot of money there. There are museums. El Paso is doing great right now. Austin has gotten so huge, even though it sort of wanted to stay a sleepy little capital.

Q: You are a former librarian and co-founder of the Texas Book Festival. What have you been reading?
A: I don’t know that I recommend these but I became totally fascinated with these books by Simon Sebag Montefiore about Joseph Stalin. I read Stalin: The Court of the Red Tsar first and then Young Stalin next, and then the book by Timothy Snyder called Bloodlands, about Stalin and Hitler. I couldn’t put them down. [Stalin and Hitler] just were so horrible that every time you read about them, you read something else horrible that they did. But it was interesting. I always read on the iPad. It’s so great to be able to download a book in 35 seconds—read a good review and download a book.

Q: How did the tradition of regular hiking excursions with your childhood friends get started?
A: Thirty years ago, for our 40th birthdays, we decided to do a Grand Canyon river trip, where we floated on the Colorado River and then camped out on the floor and hiked out the South Rim. We did that again when George was president. The mothers all took our daughters—Barbara didn’t go because she was in South Africa, but Jenna went with me. And, of course, my friends and I were old by then. The daughters hiked out in four hours, and the old mothers trudged out in seven hours. At one point I thought, this is going to be so embarrassing if the first lady has to be carried out on a gurney. But we made it. We’ve been to Sequoia, Yosemite, Big Bend, Zion, Denali, the Appalachian Trail. We do a lot of laughing. We read poetry. We’ve collected the poems that we like best and put them in a book.

Q: In all of your worldly travels, what have you observed that makes Texas unique?
A: I think our best characteristics are that we’re tough and we’re independent. We’re a state with very little public land, and people like that. I think when people own their own land, that makes them better stewards of it.