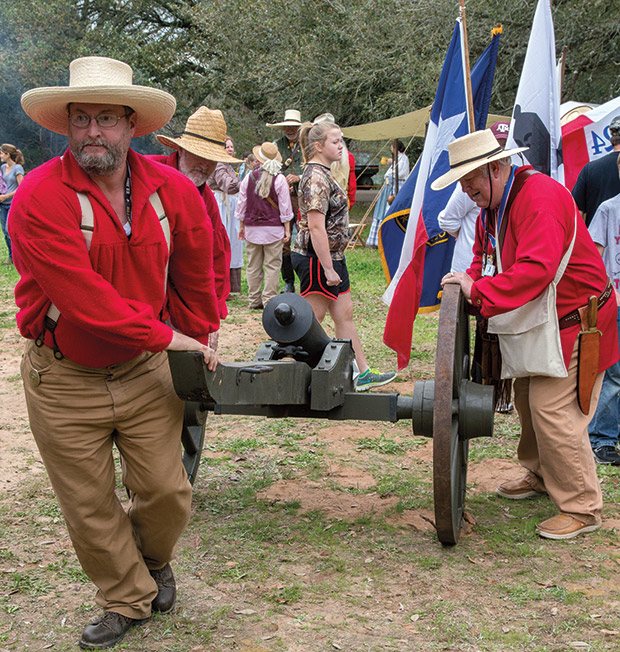 Remember the Alamo? It was there that William B. Travis penned his famous letter, signed “Victory or Death,” on February 24, 1836. In command of Texas forces besieged by the Mexican army, Travis sent the missive by courier east to San Felipe de Austin, addressed “To the People of Texas and All Americans.” In it, he declared, “I will never surrender or retreat.” Yet he also pleaded for reinforcements “to come to our aid, with all dispatch.”

Travis’ original “Victory or Death” letter is in the collection of the Texas State Library and Archives Commission and is on display online.  The archives also hold an 1836 printed transcription of Travis’ letter to the Washington-on-the-Brazos convention.

As part of the Texas Independence Day Celebration, the Star of the Republic Museum will debut A Legacy of Leadership: The Signers of the Texas Declaration of Independence, an exhibit about the declaration signers, including personal artifacts.

Eight days later, Travis revised this request in a letter sent to Washington-on-the-Brazos, where delegates were meeting to declare Texas’ independence from Mexico. Even though he was desperate for reinforcements, Travis insisted that the 59 delegates not rush to his aid but continue their work: “Let the convention go on and make a declaration of independence; and we will then understand, and the world will understand, what we are fighting for.” Little did he know that on March 2, the day before he wrote the letter, the delegates had already signed their names to the Texas Declaration of Independence, ratified the new republic’s constitution, and elected interim government officials.

March 2 marks the 180th anniversary of the founding of the Republic of Texas. It’s also the 100th birthday of Washington-on-the-Brazos State Historic Site, established in 1916 to commemorate the location of the Convention of 1836. In honor of these anniversaries, a small group of intrepid riders in period attire is retracing on horseback the route that Travis’ historic letters traveled. “The Ride for Texas Independence” will cover nearly 200 miles over 10 days, from San Antonio to Washington-on-the-Brazos.

Scott McMahon, the director of Presidio La Bahía in Goliad, is heading up the ride and will be carrying replicas of the Travis letters through a region rich in history. Departing Alamo Plaza in downtown San Antonio on February 24, the couriers will journey east on a route that follows Alt. US 90 through the towns of Seguin, Gonzales, and Shiner, and then will cut north on back roads through San Felipe to Washington-on-the-Brazos. They will carry all of their equipment on horseback, and will camp in roadside pastures along the way, just as in the old days (a support car will follow in case of emergency).

“Commemorations like this are a unique way to recognize what our forefathers did, and at the same time [the ride] gives us some small insight into what it was like for those brave men fighting for Texas independence back in 1835–36,” McMahon said.

The journey starts at the Alamo, the Spanish mission where about 200 Texian volunteers endured a 13-day siege before Santa Anna’s Mexican force of about 2,000 troops overpowered them on March 6, 1836, taking no prisoners. The Alamo defenders’ stand galvanized support for the Texas cause and inspired the rallying cry “Remember the Alamo!”

At several sites along the couriers’ route, local groups are holding related events to memorialize the Texas Revolution and Independence Day. This year on March 5, the Alamo will host the third annual Crockett Fiddlers Festival. Davy Crockett, the Tennessee congressman who joined the Texan cause and died at the Alamo, is said to have entertained the besieged defenders on his fiddle. (One of Crockett’s fiddles is on display nearby at the Witte Museum’s South Texas Heritage Center.) The free festival showcases fiddlers performing in the traditional styles of old-time music, bluegrass, and Western swing.

Throughout the week leading up to the March 6 anniversary, living history interpreters will be at the Alamo visiting with guests about life in 1830s Texas, and on the morning of March 6, the San Antonio Living History Association will hold a “Dawn at the Alamo” ceremony at 6 a.m., including the lighting of 13 candles for the 13 days of the Alamo siege.

From the Alamo, McMahon and the other couriers will ride to Gonzales, about 70 miles due east. Gonzales was the home of 32 volunteers who answered Travis’ call for reinforcements. On March 1, 1836, the men—who became known as the “Immortal 32”—marched into San Antonio and slipped through enemy lines to join their comrades at the Alamo. They were the only fighters to answer the call, and they all perished in the battle.

Gonzales’ pride in its pivotal role in the Texas Revolution is on display at the Gonzales Memorial Museum, which was built in 1936 to commemorate the Texas Centennial and features a granite and bronze monument to the Immortal 32 at its entrance. Inside, documents, photographs, and artifacts portray Gonzales’ role in the development of Texas. The exhibit includes a cannon believed to be the “Come and Take It” cannon that was central to the opening skirmish of the Texas Revolution in October 1835, as well as a bullet mold used by settlers during the war. At 2 p.m. March 6, the Daughters of the Republic of Texas will host a memorial service at the museum, and actors will stage the play Songs of Susanna (by Fletcher Clark) about the Immortal 32 in the museum’s 500-seat amphitheater. (If it rains, the Crystal Theatre will host.)

The next historically significant stop along the couriers’ route is San Felipe, the destination of the “Victory or Death” letter, located nearly 100 miles east of Gonzales on the Brazos River. Established in 1823 as the heart of Stephen F. Austin’s colony, San Felipe served as the first capital of the provisional government of Texas. After the fall of the Alamo, warnings about the advancing Mexican army prompted San Felipe residents to evacuate the town in what became known as the Runaway Scrape. On March 30, 1836, Texian troops under Sam Houston burned the town in their wake, leaving nothing to benefit the Mexican army.

San Felipe was rebuilt after Santa Anna was defeated at San Jacinto. The little town is now home to the San Felipe de Austin State Historic Site, which features a bronze statue of Stephen F. Austin and a replica dogtrot cabin. The visitor center hosts thematic 45-minute talk-and-tour programs nearly every weekend at 11 a.m. and 2 p.m., and hands-on activities for families throughout the day. The first weekend in March, the site will offer a presentation about Travis’ time in San Felipe as a lawyer and his transition to the Alamo, followed by a guided walk of the grounds. Children will be able to participate in a mock militia drill, sign an oath to the Mexican constitution of 1824 using a quill pen, and make a wet-plate print of the “Victory or Death” letter.

From San Felipe, the couriers will ride the final 50-odd miles north to Washington-on-the-Brazos to deliver Travis’ letter addressed to the convention. Their arrival on March 5 will help kick off the two-day Texas Independence Day Celebration taking place that weekend at Washington-on-the-Brazos State Historic Site. This park of nearly 300 acres is home to the Star of the Republic Museum, a star-shaped building with 10,000 square feet of exhibition space devoted to the decade when Texas was an independent nation. It is also home to Barrington Living History Farm, the farmstead of Anson Jones, fourth and final president of the Texas Republic, and Independence Hall, a re-creation of the one-room, rough-hewn wooden building that hosted the Convention of 1836.

The celebration will offer a glimpse of what life in Texas was like circa 1836 through musical performances featuring banjos, fiddles, and dulcimers; demonstrations of traditional crafts such as pottery, woodworking, and quilting; living-history military reenactments; and a theatrical play about the signers of the Texas Declaration of Independence.

The site will waive admission fees for the weekend, giving visitors a special chance to explore the Star museum’s fascinating artifacts from the Texas Republic period, including a faded flag thought to be the oldest with the Lone Star symbol, a bobbin whittled by Sam Houston, and a handwritten invitation to a March 2, 1837, Washington-on-the-Brazos event, “in celebration of our own National Independence.”

Even then, just one year after the revolution, Texas recognized the importance of commemorating its past. Remember the Alamo? How could we forget?